Latvia is the 39th country I’ve been able to visit, and based on Riga it is easily in my top ten. I really enjoyed my short time here.

Getting off the bus from Tallinn, the first thing I noticed was that it was a little colder here. Both Helsinki and Tallinn are right on the water, but Riga is slightly inland. Still, it wasn’t a hard walk from the bus station to the hotel, and I got to see some of the Old Town. 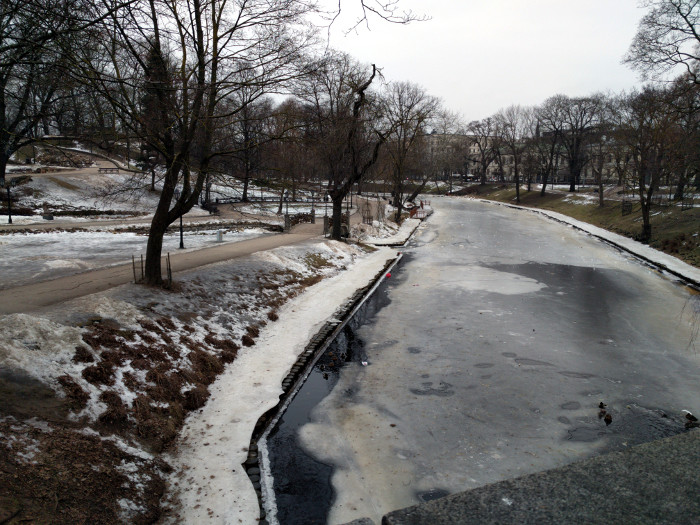 I had the rest of the day to myself, so I decided to explore the City. One thing I noticed about Riga is that it is very clean. Granted, when you have piles of snow that don’t melt this doesn’t mean everything looks brand new, but I didn’t see the usual trash and paper on the ground like I might find in London or Paris. While the buildings may be old, they are well maintained, and some are quite beautiful, which is not how I imagined a former Soviet bloc country to look. 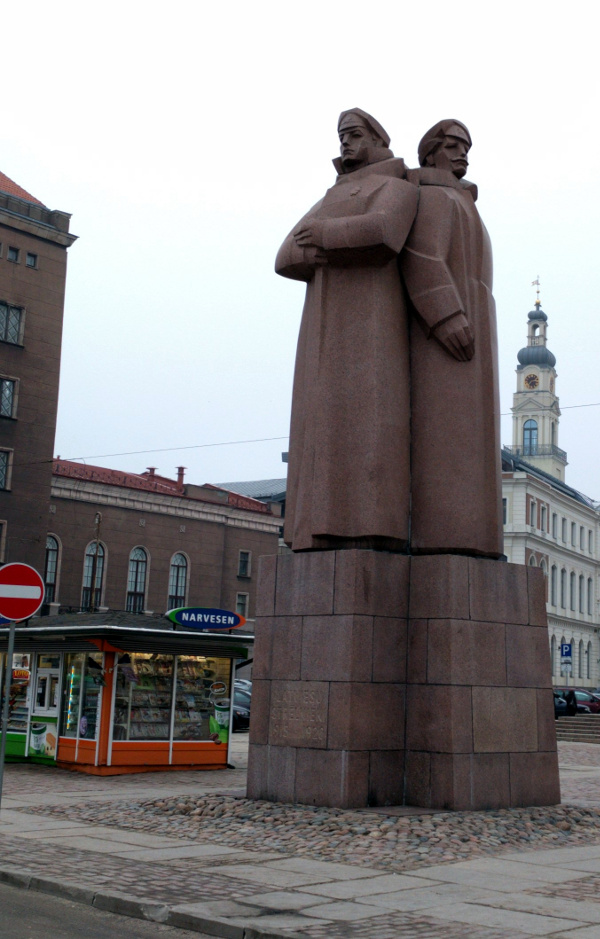 Granted, there were a few reminders, such as the impressive “Riflemen Monument“. This was originally meant to honor those in the Latvian military who supported the Bolsheviks (the “red” riflemen) but I was told that now it also honors the opposition “white” riflemen.

The reason I came to Riga was to participate in a conference held by LATA (Latvijas atvērto tehnoloģiju asociācija or the Lativian Open Technology Association). LATA is a volunteer organization with only one employee, Ieva Vitolina, who was kind enough to invite me to speak.

Not only were the people in general in Riga very kind to me, the LATA people treated me like a diplomat. 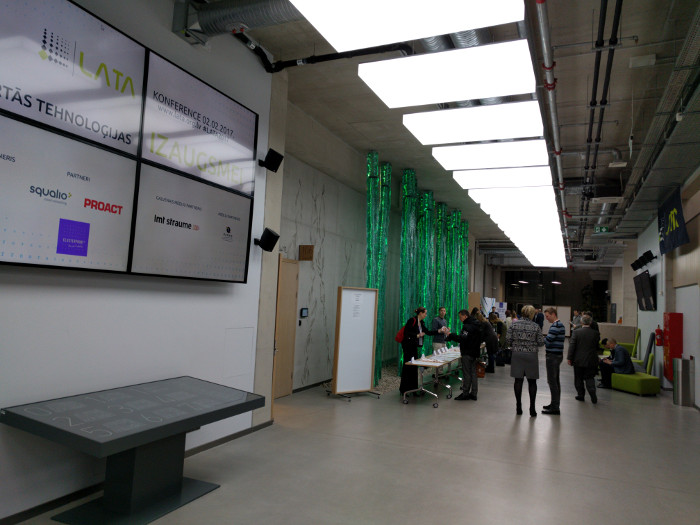 Before the conference I was introduced to Jānis Treijs, of the LATA Board. A very nice man, Jānis is very tall, and I had to joke that when I studied physics we used to say all people were two meters tall to make the math easier, but it is rare I actually get to meet someone that tall. 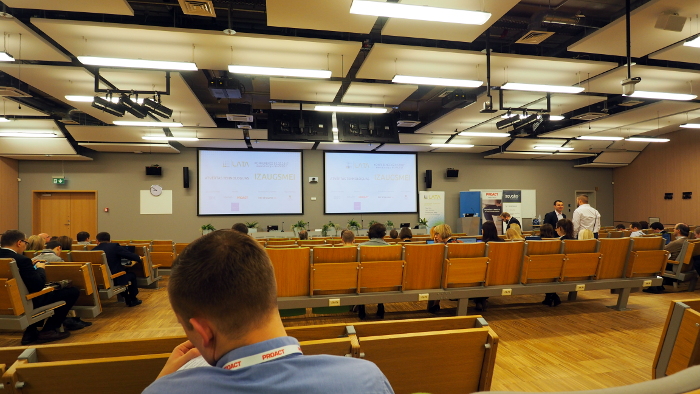 The conference was held at the Latvijas Universitātes Dabaszinātņu akadēmiskais centrs (Latvian University of Natural Sciences Academic Center) which was a very modern facility, much nicer than many of the schools I attended in my youth. The morning program was held in this main room, and after lunch we would break out into another room as well (which was where my talk was to be made). About half of the program was in Latvian, with the other half in English.

IBM was a sponsor, and Andrzej Osmak from Poland gave a talk on IBM’s approach to open. 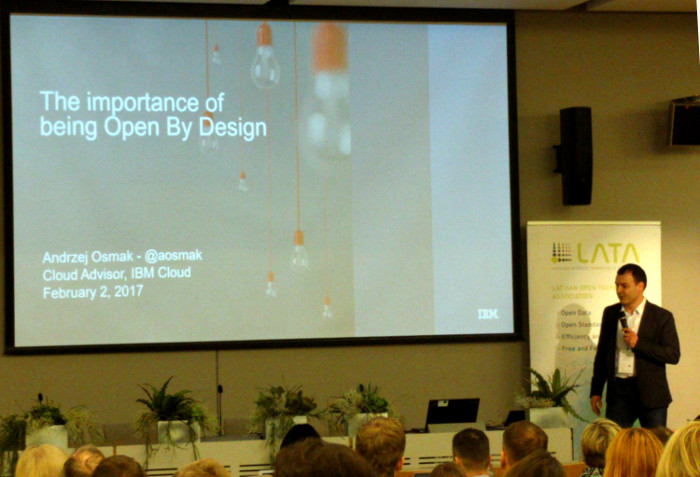 To be quite frank, OpenNMS would not exist without IBM. They are a main supporter of the Apache Foundation and most of the developers use Eclipse as their IDE. The only small criticism I would have about that talk was an emphasis on permissive licensing. I think permissive licenses are great in the proper context, but they aren’t the best choice for everyone.

This was followed by another talk in English by Dr. John O’Flaherty from Ireland. 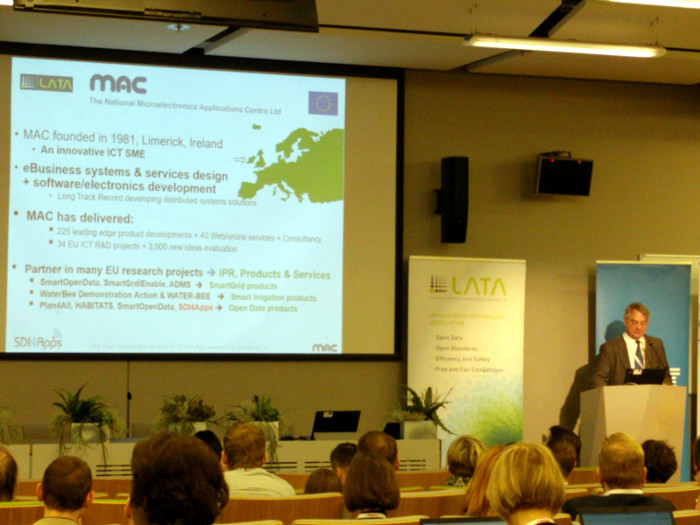 His focus was on “open data” and the different levels with which data can be made available. I am always amazed at what wonderful things people can create when companies and governments make data available in a usable fashion, and John gave several examples of those.

The remaining morning talks were in Latvian, so I just tried to understand them through the slides. The Clusterpoint presentation was interesting in that the slides were in English but the presentation itself was given in Latvian.

The morning ended with an awards presentation which had three categories: the most open institution, the most substantial contribution to technology promotion, and the best start-up.

Then it was the lunch break, which I spent talking about business and free software with Valdis, Ieva’s husband. It was then time to get ready for my own presentation.

There were two presentations in English about open source business. Including mine, Aleksejs Vladiševs the founder of Zabbix shared his experiences. It was kind of ironic that both of us work at pure open source companies and both of us work in the network monitoring space. Despite that, we tend not to compete, and it was interesting to see how similar our paths were.

My talk seemed well received, although I had a little less than 30 minutes so I didn’t have any time for questions. I was humbled that the winner of the LATA start-up award, Mihails Scepanskis, wanted to ask me some questions about open source business afterward, and along with his wife Anna and Vladis, we spent pretty much the rest of the conference talking. As usual, my favorite conference track turned into the “Hallway Track” once again. 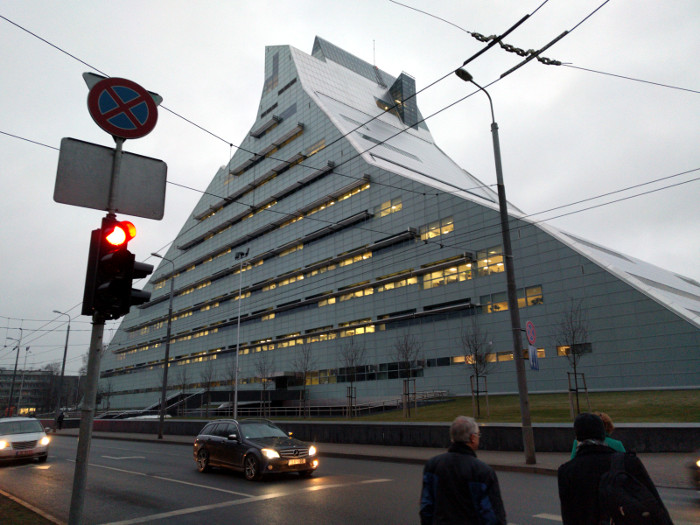 That evening, the organizers of the conference took a group of us on a tour of the National Library of Latvia. This is a major landmark in Riga and it is easy to spot from many places in the city. It was planned for many years, but finally opened in 2014. 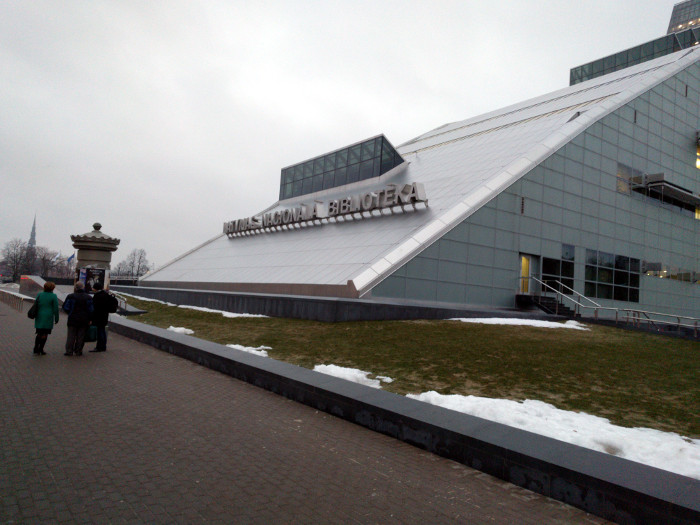 The interior hosts a 400+ seat state of the art theatre, but the first thing I noticed was the central atrium. 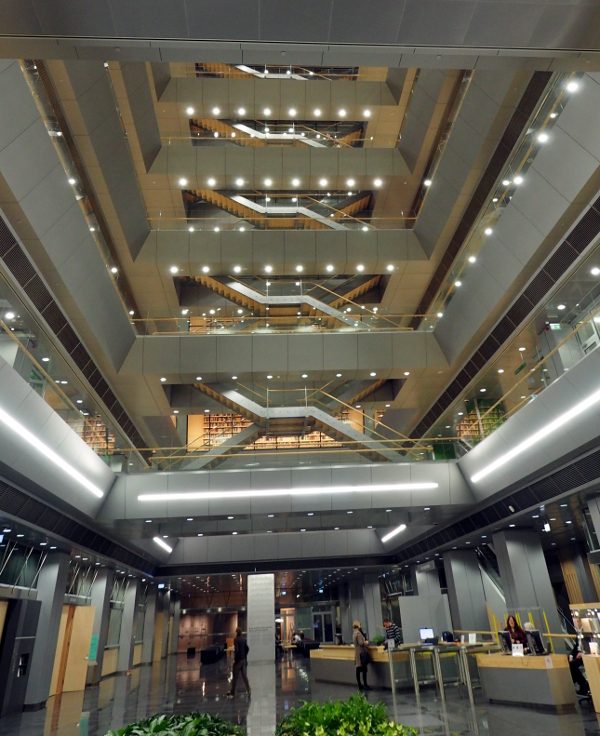 Inside it there is a wall of books. These were books donated by the Latvian people to the library, and it stretches for several stories. We were also told an interesting story, when the library opened several thousand books were moved from the old location to the new building via a “human chain“. People formed a line over a mile long and passed the books hand to hand. 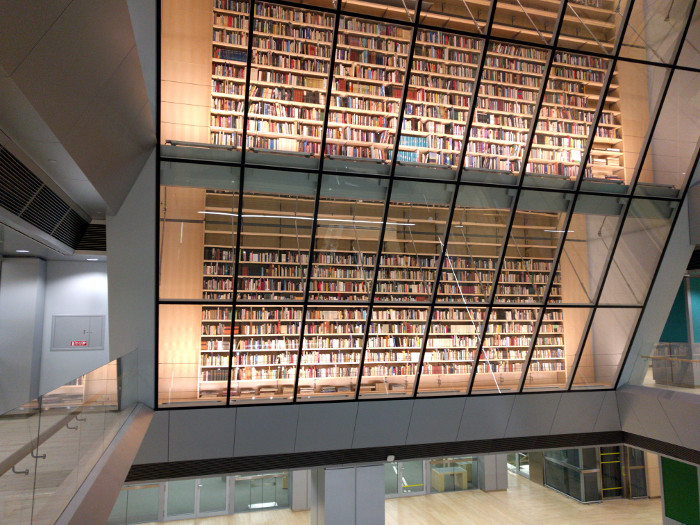 The tour took us up through the building, and we got to see a number of the large (and not so large) reading rooms. One that caught my eye was dedicated to American culture. 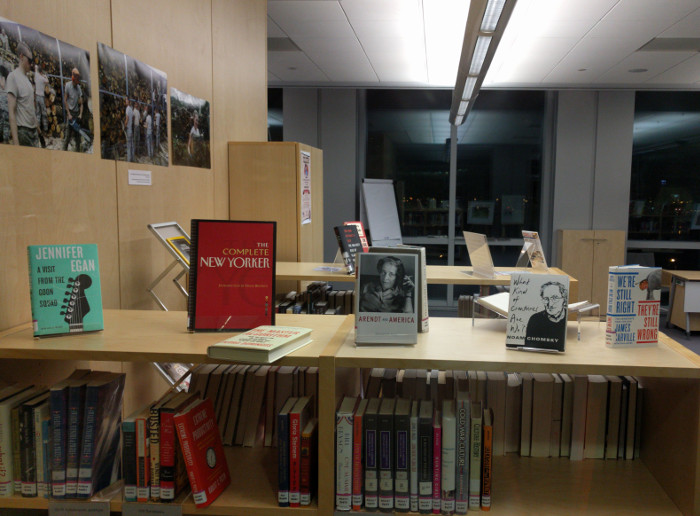 I found it interesting that the books on display included ones by Noam Chomsky, James Carville and articles from the New Yorker.

Each floor was color-coded, and we were told that the colors corresponded to the “pre-Euro” Latvian currency, the Lat. The higher floors had colors that corresponded to higher denominations. 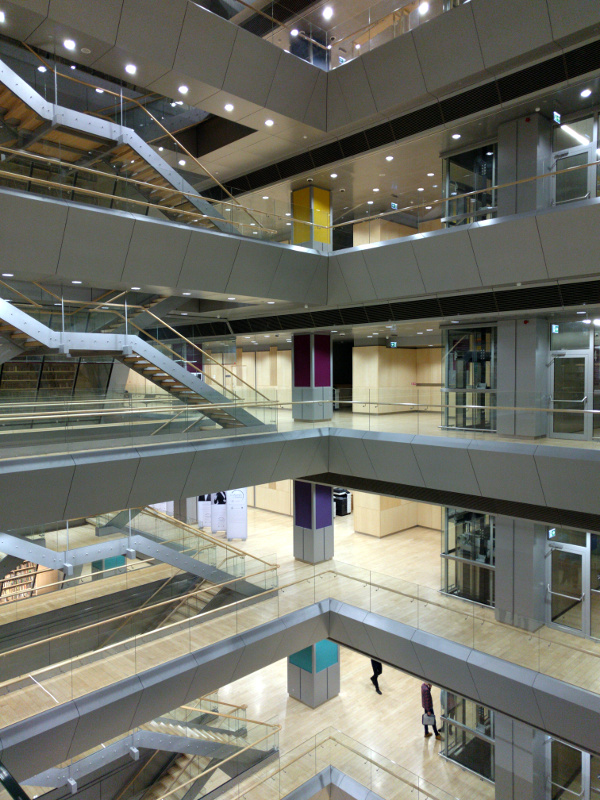 At the top was an interesting display. It was a Cabinet of Folksongs. This wooden cabinet holds over a quarter of a million Latvian folksongs written on small slips of paper. 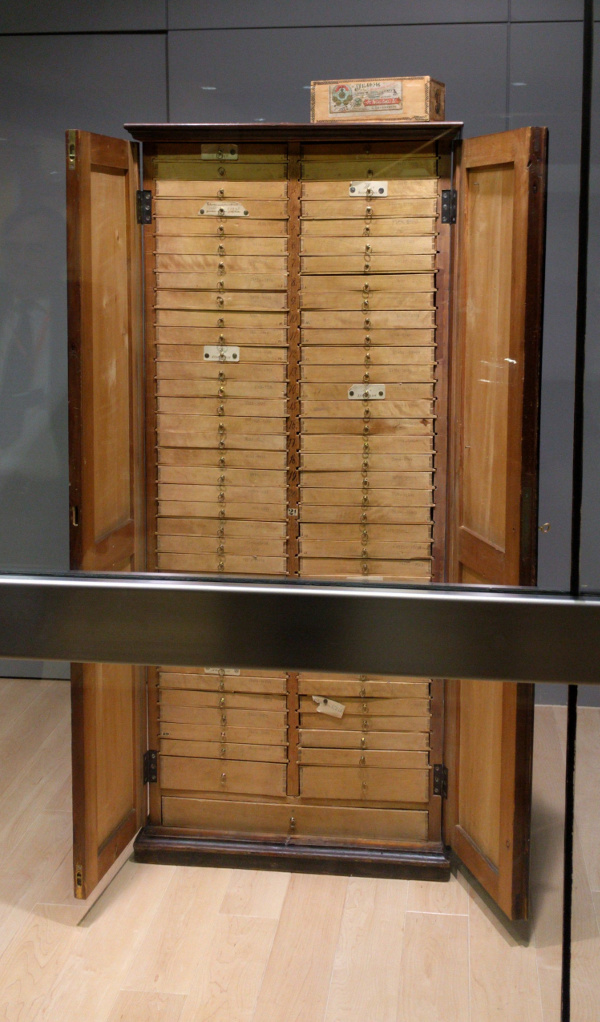 The tour was followed by a wonderful meal in a restaurant in the Library itself. I got to spend more time talking with Aleksejs, Jānis, his wife and John, as well as drinking some nice beer over wonderful food.

The next morning Jānis’s wife had arranged for me to meet with the ITC department of the City Council of Riga. Riga firmly believes in Internet access for its population. The City has more free WiFi coverage than any other European City, and the Council is responsible for providing as many services as possible to its citizens to make sure the government is responsive to their needs. It was a refreshing conversation. They use a number of tools, including Zabbix, so I wasn’t expecting them to switch to OpenNMS, but I had a nice meeting learning about their environment and sharing a little bit about OpenNMS. 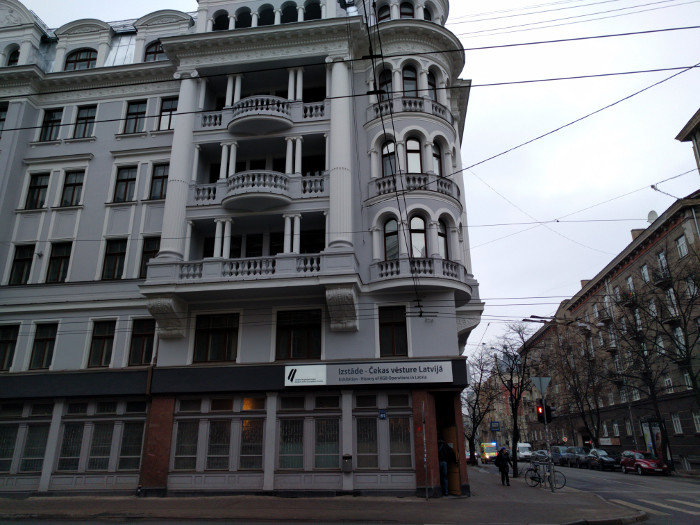 We had a little time before lunch, so we made a quick visit to the “Corner House“. This was a beautiful apartment building that was taken over by the Cheka, a division of the KGB, and was the source of terror for many citizens of Latvia as late as 1991. It reminded me of the House of Terror in Budapest. Jānis’s wife told a story of her mother having to go to this building for an interview as the Cheka was interested in one of her relatives. 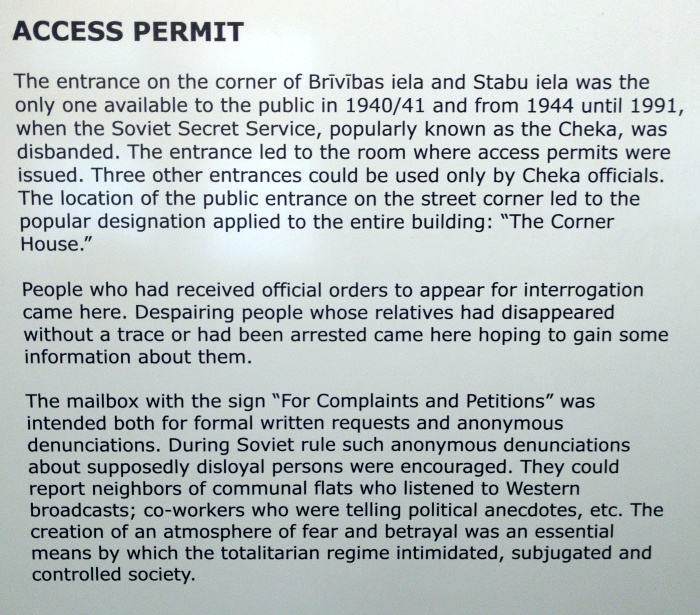 It is a shame that a thing of such beauty could be used for such evil.

After that we met up with Jānis for a wonderful meal, and then I made my way to the airport for my trip to Brussels for FOSDEM.

As the airBaltic Q400 took off and got above the clouds, the cabin was suddenly filled with light. I realized that I had not seen the sun properly in a week. If Riga and its people can be this beautiful in the dark of winter, it must be a truly magical place in the summer. I hope one day soon to return.