Today we released version 14.0.2 of OpenNMS. It is a recommended upgrade for all OpenNMS 14 users because is addresses a memory leak caused by the version of Vaadin we were using.

This week I was able to visit the Red Hat corporate headquarters in downtown Raleigh for the first time. While I had been on their other campuses in the past, this was my first time in Red Hat Tower, a tall building that they leased from Progress Energy a few years ago to turn into their HQ. While I was using Google Maps to get there (downtown Raleigh has a lot of one way streets that confuse me) it was pretty obvious where I was headed once I turned off the highway and saw the Red Hat logo on the top of a building off in the distance.

I am a huge Red Hat fanboy. First, I love where I live in North Carolina, and this is an NC company. Second, they truly understand open source and are able to help others realize the value it can bring to their business while making money at it. With a market cap greater than US$11.5 billion, this is a real company that is also doing a lot of good (for comparison, note that as I write this CA has a market cap of US$14 billion).

Red Hat gets a lot of disrespect in certain circles because it isn’t headquartered in Silicon Valley. There is a huge “not invented here” complex out west, and I think it is in part because the Valley has been unable to duplicate Red Hat’s success with open source.

When you visit the campus you get a sense of how the idea of open source pervades every aspect of company culture. Open source is about sharing and working together, and that can be applied to many things in addition to software.

Part of that is exemplified in the website opensource.com. I believe it was started in 2010 (prior to that, the URL pointed to Red Hat’s corporate page) as a method for promoting the “open source way“. It is sponsored by Red Hat but does a great job of not being Red Hat centric. This isn’t a marketing platform for Red Hat’s products as much as a platform for marketing the Red Hat philosophy.

Despite being less than an hour away, I don’t get to see the people behind opensource.com often. I used to write for them pretty regularly in the beginning until time constraints made that harder, but we have a healthy e-mail correspondence. I do run into Jason Hibbets (author of The Foundation for an Open Source City) at conferences, but this was the first time I got to meet almost everyone in person.

I didn’t notice until later that a lot of people I know at Red Hat have names that start with the letter “J” – even the CEO is named Jim.

I ended up spending about two hours there and had a great time talking about technology and open source society. Red Hat looks like a great place to work, and the red fedora is pretty much everywhere.

Thanks to a swag trade with my friend Kevin Sonney many years ago (at least a decade), I have an authentic Red Hat fedora and I learned that it is truly “old skool” due to its having a gold Red Hat logo on the inside. Cool. 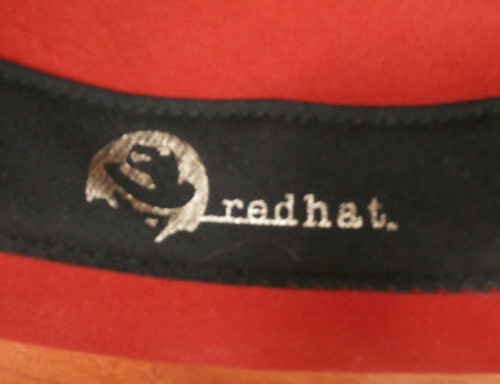 I am hoping that my schedule will free up enough in 2015 that I can write for them some more. As I was telling stories, Jason B. or Jen would jump in with “that could be an article”.

In any case, with over 400,000 page views per month at opensource.com they are obviously doing something right, and it has earned a prominent place in my RSS feed. I look forward to visiting the Red Hat HQ and seeing them again soon.

This past summer I was lucky enough to be gifted a Samsung Android Wear watch as I don’t always get to play with the new toys. As xkcd pointed out, a lot of people no longer wear watches, but I still do, so I was curious as to what a “smart” watch could do for me.

However, I preferred the look of the round Moto 360 which was going to be released soon versus the Samsung, which was square, so I ended up selling it on eBay. I felt a little bad selling a gift but I rationalized it by earmarking the funds for some sort of Android watch to replace it. I was all set to buy the 360 when LG announced its G Watch R. I loved the way it looked, so that’s what I decided to get. I disagree with the Wired reviewer who prefers the Moto 360 as compared to the G Watch R, as that watch just looks to me like a round slab of glass, but de gustibus non est disputandum.

Having had it for a month now, I find I really like having a watch tied to my phone. I can leave the phone in my pocket and interact with most notices through the watch. Despite my penchant for droning on and on to my three readers, even I would have trouble describing the features of the phone in a post, so I made a little video.

If you view it, the first thing you’ll notice is that I have no future as a hand model. I also did it in one unedited, continuous take, so forgive the pauses. It was really hard to light, since when the watch face switches from dark to light it tended to get washed out, so apologies for the quality.

One of the features I didn’t talk about is the integration with Google Maps. It would be difficult to demo, but when you are using Google Maps, each maneuver is alerted on the watch. It’s pretty cool. It also has a surprisingly good battery life, which seems to be a complaint among smart watch users.

All in all I like having the watch a lot more than I thought I would. It is perfect in social situations where constantly pulling out my phone would be awkward, and I can see the future imagined by Scott Adams where you combine a watch with a smart ring on your other hand to enable gestures and spacial recognition while your phone (or handy or whatever we decide to call it) sits in your pocket.

While we position OpenNMS to compete with products from giants such as HP, IBM and CA, I had doubts that we were on their radar. But yesterday I saw the following in an article on Network World:

While not quoted, it appears that the CTO of CA dropped the name of our project, so one can only assume he is aware of what we are trying to do.

I do agree with him that network management, especially at scale, is a “freaking hard problem”. Note that we are both using the term “network management” as an umbrella term for managing anything that is connected to the network, which ranges from traditional networking gear such as routers and switches all the way up the stack to applications and mobile devices – Internet of Things style.

It is the main reason we designed OpenNMS as a platform versus an application. It is a requirement that it be flexible enough to meet the unique needs of our users, and that can only be done by writing OpenNMS to be extensible while also automating as much of the work as possible. It is a complex problem.

It made my day that the CTO of a nearly US$14 billion company mentioned our effort. It means we are on the right track. We definitely don’t have the resources of CA but our team is talented and they understand the network management space.

It was also cool to see 451 Research mentioned in the article. I really like those folks, so much so that we just contracted with them. Perhaps we can get more people talking about us.