I went to my first Open Source Think Tank conference in Napa, California last week, and since I’ve come back I’ve been trying to think of the best way to write about it without seeming like an ass (well, more of an ass than usual).

I didn’t like it, and found it slightly unpleasant. In defense of the conference, I am certain I was in the minority, and I did really enjoy the networking opportunities, but the conference as a whole was not for me.

I first heard about the Olliance Group’s Think Tanks back in 2007, and I commented about the first one in Europe back in 2008. The event is invitation only, and I complained, tongue in cheek, that I was never invited to such things. I was surprised that Larry Augustin took the time to comment on that entry that no one knew I was interested, and since then I’ve been invited to them all.

Considering our business model of “spend less than you earn” keeps me busy, I have never been able to justify spending several days at a resort in wine country, but it turns out that this year was I going to be in San Francisco that weekend anyway, so I decided to attend to see what the whole thing was about.

In the Thursday opening remarks we were told that we could talk about the conference, but it was courtesy not to quote anyone by name. This was to make sure the conversations could be as open as possible without the attendees having to couch their thoughts within a political agenda. I’m cool with that, so please forgive me if I’m a little short on details in this post. What happens at Think Tank stays at Think Tank.

The conference consists of a couple of days of panel discussions, presentations and in this instance, two case studies. Once a company presents an issue involving open source that they would like to resolve, the attendees break out into teams to discuss a number of questions and possible solutions. On Saturday morning, teams were to present their findings, and the best teams win a Motorola tablet.

One of the case studies consisted of a trade organization that was trying to establish some open standards, but as with most such groups they receive funding by basically hoarding information. We struggle with this all of the time with our involvement in the TeleManagement Forum. We are trying to develop open source reference implementations for a variety of TMF interfaces, but we get resistance at sharing them, since those interfaces are considered TMF intellectual property. I won’t say that the process is hopeless, not at all, but it is a struggle.

The second one involved a large application currently managed by a branch of the US Government that they are in the process of making open source, and they wanted input on how to get more community involvement.

Interesting questions, but nothing I really wanted to spend time talking about. I was there to get ideas on how to stay true to our open source ideals and yet make lots of money. I believe the answer lies in the fact that many open source projects are large, powerful and complex, and you can monetize making it simpler for people (i.e. SaaS, etc.).

So you can imagine my surprise that two of the people I met at this “open source” conference, and had a lot of fun with, were from Cisco and Adobe. I also met the legal counsel for one of our largest customers, a guy from Amazon that used to work down the road at Red Hat, and the woman who was ultimately responsible for nuking my paper submission to OSCON.

In addition I got to see some familiar faces, including Jono Bacon, Erica Brescia, Mark Hinkle and Ross Turk.

But cool people cannot compensate for the universal truth that panel discussions stink. There were a lot of them. And the whole tone of the conference was aimed at the “Go Big or Go Home” crowd, of which I’m not a part. This doesn’t mean I have in any way limited my vision for OpenNMS, but getting bigger for just the sake of size is just not me. I want to build a company that lasts, and through keeping a large and growing customer base happy, make a lot of money. The “Go Big or Go Home” folks seem attracted to models in which rapid growth is the only goal, and if the initial investment doesn’t fund it, future growth is taken out on the backs of customers (<cough>Groupon<cough>). I just found little I could use at the conference.

For example, at Friday’s breakfast I ended up at the same table with Martin Mikos. He has made a personal fortune under the banner of open source, but he keeps confusing proprietary software (with an open source component) with open source software. Through his leadership, MySQL ultimately ended up being owned by Oracle, and the inability of Eucalyptus to understand the difference led to the OpenStack fork. But what am I going to do, ambush him at breakfast? Not only would that not be cool, he would not care, and I seriously believe he is unaware of the difference. I think that was true of a lot of the attendees. To many, making money is more important than building something to last, although making something that lasts does not preclude making money.

I did try to introduce myself to Rod Johnson, but never got the chance. I was hoping he’d get a laugh out of this old picture I have of Ben Hale taken during one of our early Dev-Jam conferences, back when SpringSource was called Interface21.

I did have to leave in the middle of the conference to head into the city (the main reason I was out there), so it is possible that had I stayed for the whole event I might have gotten some answers to my questions and had a better overall experience. But I think overall the divide was too great between my experience with open source and most of the people there.

With all of the recent press about Red Hat becoming a billion dollar company, I can’t help but imagine how different that company would have been had it been headquartered in Silicon Valley. The Think Tank conference seems to primarily represent Valley thinking, and while that isn’t a bad thing in and of itself, it’s not for me.

I think there are better ways.

Just a quick post to point out two things.

The first was that I found myself seeing a lot of press about the OS X FlashBack Trojan, and I immediately tried to test my iMac … before I remembered I was on Ubuntu.

I thought that was interesting, not only because Linux tends to be safer from such things but mainly due to the fact that I totally forgot I wasn’t on OS X.

I should also note that most sites are suggesting that the easiest way for people to detect the trojan is to download and execute some code off the Internet. (sigh)

The second thing is that David Bryne has started blogging again, and he has a cautionary tale about Amazon removing Kindle content without asking permission:

It seems that, once again, Amazon has removed purchased material from our devices. I suspect Apple had a hand in this as well. Apple has consistently sabotaged their competitors’ apps and software that allow you to sync other devices with their own. Then, all of the sudden, apps that once did X and Y suddenly don’t perform those functions anymore. In most cases those apps were free—so it is hard to complain too much. Although, some of the free apps contained magazines, books and other content, like Decoded, that I purchased and though they may not have been very good, I paid for them and they were mine to keep! They came to my house and ripped pages out of my book!

As much as I’d love to have some sort of e-reader, until they stop doing stuff like this I’ll vote with my wallet.

OpenNMS has many uses, from insuring that customers of a billion dollar pizza business get their food on time to maintaining the machines that guard nuclear fuel, but we all know what we really need.

A way to manage our soda machines.

Nothing says “ugly” like a bunch of geeks, and nothing is uglier than when those same geeks are deprived of caffeine.

Thus today, the OpenNMS Project is happy to announce the Open VeNDing Project (OpenVND), leveraging the power of OpenNMS to address this need for the greater good. 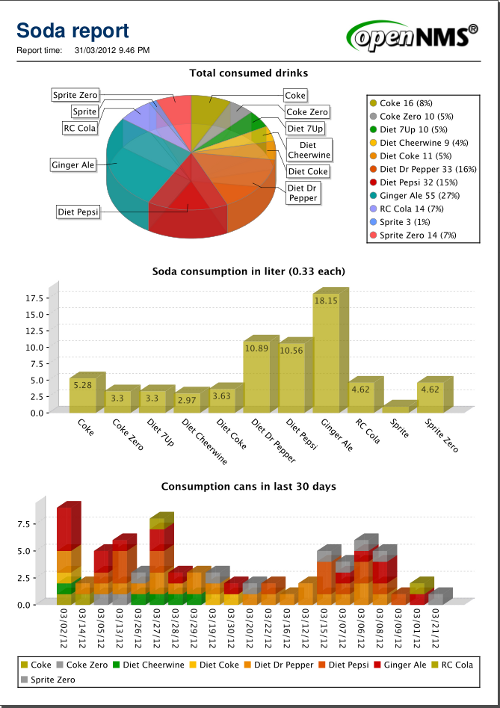