Apologies to my three readers for the two-plus week delay in writing this up. I know you’ve been waiting for this post with more anticipation than Season 7 of Game of Thrones, but things have been crazy busy in OpenNMS-land of late.

As you know, this year’s Dev-Jam was held at Concordia University in Montréal. For most of the week we had access to a nice, large space which included air conditioners (the Grey Nuns building does not have central air), but due to a scheduling conflict we had to move out for the day on Thursday.

We moved to the basement cafeteria, which worked out rather well. 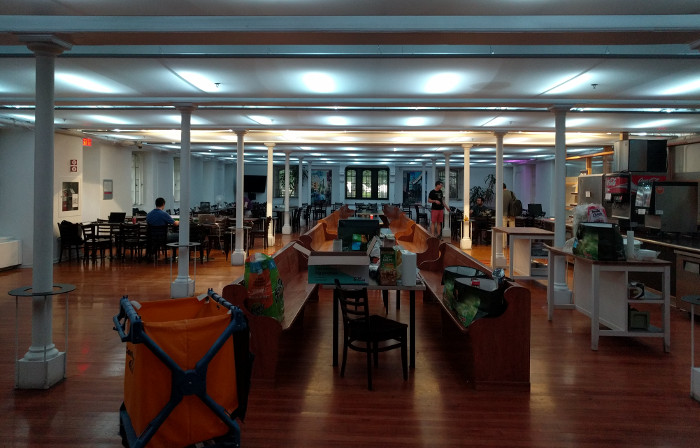 There were no A/C units but with the windows open there was a good cross breeze and it was comfortable. By the fourth day of Dev-Jam people are pretty much settled into a routine, so the day was mostly spent working to finish up various projects.

On Friday we moved back upstairs. The last full day of Dev-Jam is always bittersweet for me, as I love the “show and tell” part where people share what they have been working on, but I hate the fact that it is over for another year. We also forgot to bring the equipment we usually use for video capture (it was left back in Minnesota) so while the sessions were recorded, they haven’t been posted to Youtube yet. 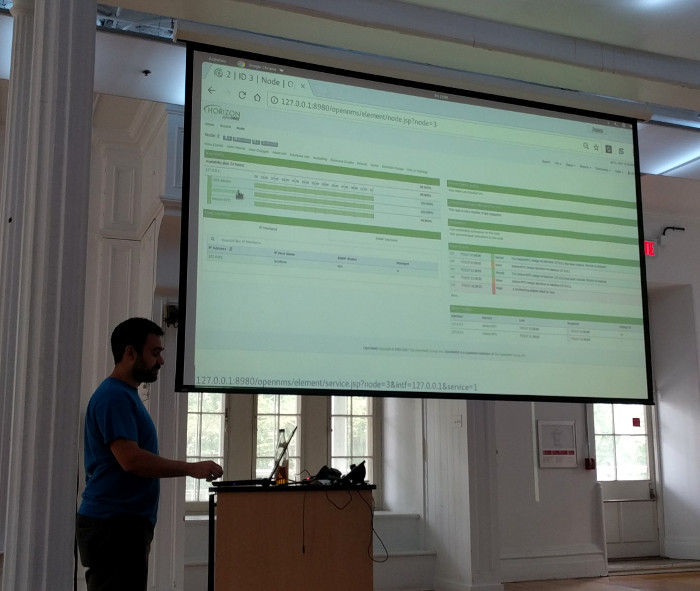 Jesse kicked off the presentations talking about work he was doing to assign specific monitoring tasks to particular Minions.

Markus followed that with his work on adding “doughnut” graphs to the user interface. These resemble the graphs available with Compass™, our mobile app. That is supposed to be a green doughnut and not a grey one but the projector didn’t render it very well. 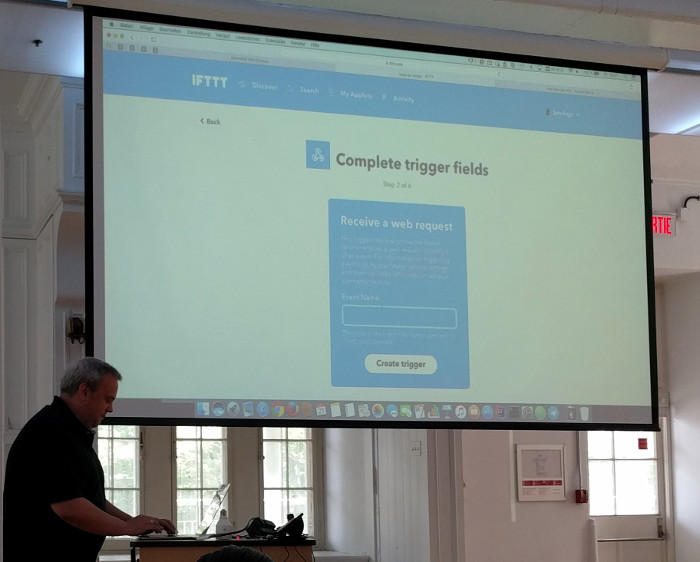 As OpenNMS wants to be the monitoring platform of choice for the Internet of Everything, Christian did some work on integrating it with “If This, Then That” (IFTTT) 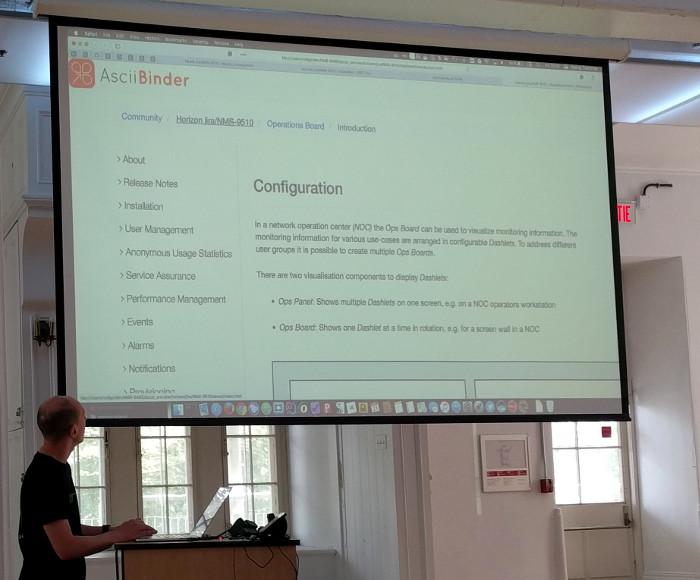 Ronny is our “documentation czar” who led the effort to create the most awesome docs.opennms.org site. He explored using ASCIIBinder to manage our growing collection of documentation. 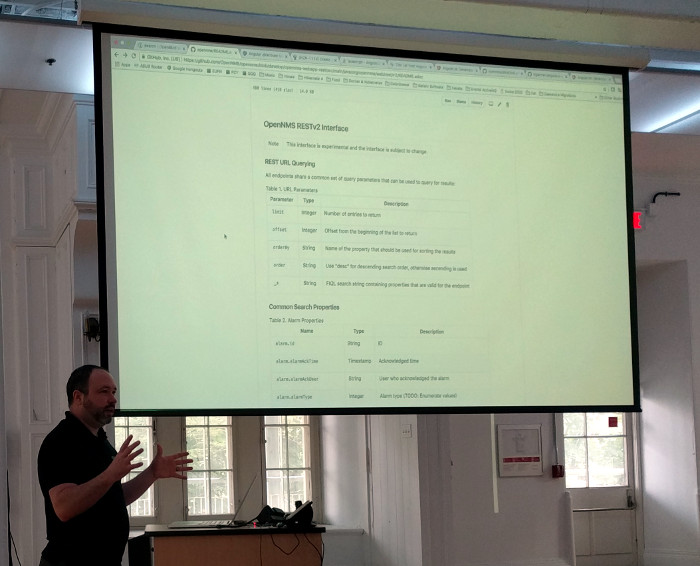 I work with some amazing people, and years ago they saw the potential in adding ReST functionality to OpenNMS. It was a great decision and makes OpenNMS extremely flexible when integrating with other systems. Seth presented some of the work he is doing to extend that feature. 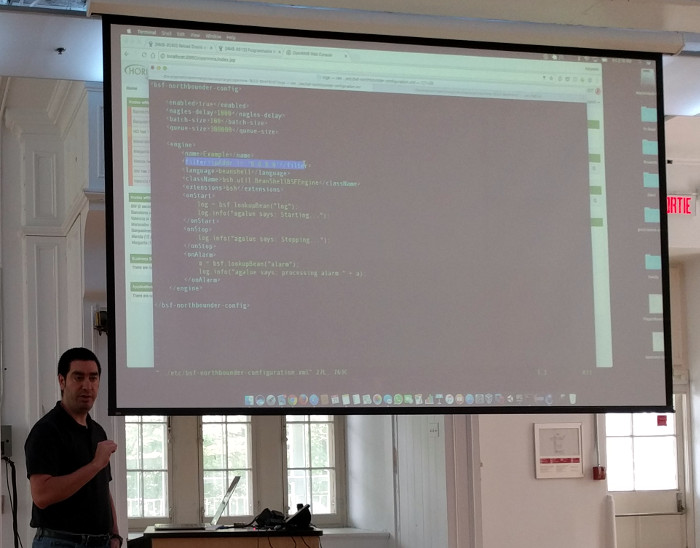 OpenNMS has a couple of ways to correlate alarms. The basic method is using the “vacuumd” configuration and SQL, but a stronger (although more complex) method is to used the Drools business intelligence engine. Alejandro presented some work he is doing to move some of the legacy vacuumd tasks to Drools. 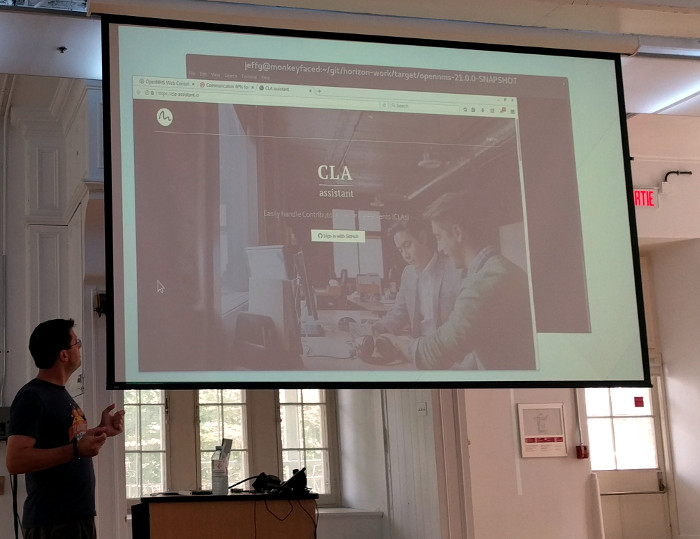 Contributor License Agreements are a controversial topic in open source, but we use one for OpenNMS. The main reason is to ask any contributor to certify that they have the right to contribute the code. It may seem trivial, but not only does signing such an agreement make the person think about it, it does give the project some cover in case of a dispute.

We currently manage our own CLAs, but the website CLA Assistant aims to make it easier. Jeff presented on what he found out about the service, and we may be migrating to it in the future. 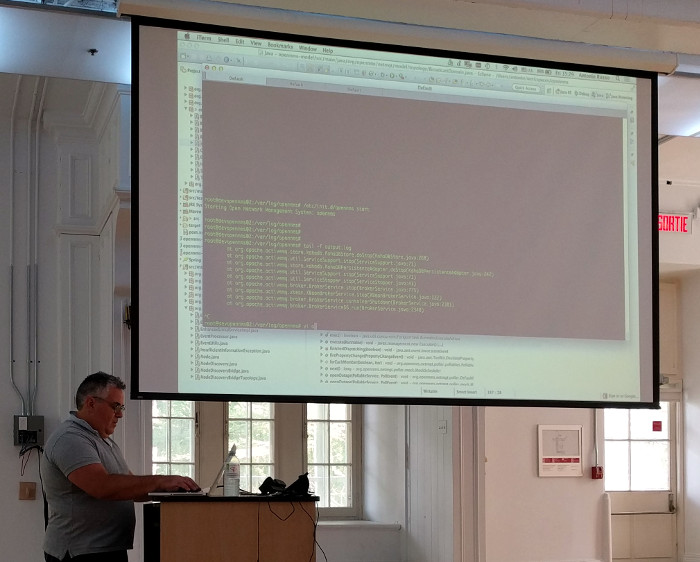 And last but not least, Antonio talked about the work he is doing on Enhanced Linkd. This is the process that figures out Layer 2 connections between devices. It is non-trivial as vendors seems to relate this information in different ways, and we really appreciate the time he has put into that part of the project.

It was great seeing everyone again, and it was also cool to hold the conference in a new location (well, cool once it was over, it added a lot of stress to my life). I’m eager to start planning next year’s conference.