I just got back from spending some time with a client up near Boston. My hosts were kind enough to drive me to New Hampshire, which is the 44th state I have visited. 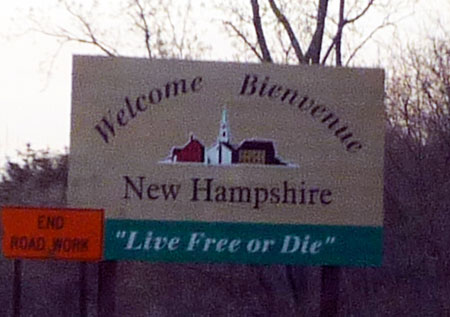 Any OpenNMS users in Maine, Rhode Island, Idaho, Nebraska or either Dakota need some on-site consulting?

I hope the ‘canes pending victory over the Bruins won’t strain our new relationship. (grin)

If you didn’t have a chance to make it to the first OpenNMS Users Conference held in Frankfurt this year, well, your life is just a little bit less exciting than it could be. But there’s good news – through the magic of the Internet you can watch all of the presentations and get the program slides.

Many thanks to the gang at Nethinks for creating this amazing web page and encoding all of the video. As you can see it is designed to display more than one year, and we hope to make next year’s conference even bigger and better – if that is at all possible.

So don’t miss your chance to hear me drone on and on for over two and a half hours, especially if you need a cure for insomnia.

But seriously, don’t miss the other presentations by the fine group of OpenNMS community members who made this conference the success it was, and continue to make OpenNMS the only choice for a 100% free and open source enterprise management platform.

Klaus sent me the good news that a review of OpenNMS has been printed in iX Magazine, the leading German language publication for IT professionals. 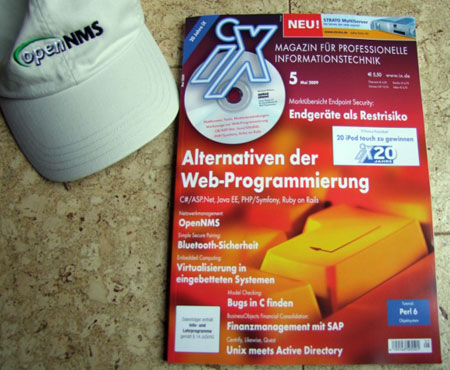 The article was written by Alexander Finger, Klaus Thielking-Riechert, and Ronny Trommer. They are also working on the first OpenNMS book, which we hope to have published by the end of the year.

Many thanks to the guys for taking the time to write this, and to iX for publishing it.

My mail client blocks the automatic download of images (and yours should, too) so I found this amusing from eBay today

Somehow I don’t think a Mitsubishi Galant is the same as a Lotus, much less a 911 killer.

I finally managed to crawl out of bed this morning (after pulling a muscle in my back this weekend while putting in the vegetable garden) to find out about the Sun acquisition by Oracle.

I don’t have any strong feelings about this one way or the other, but I think in the long run it can only help Java. OpenNMS is written in Java, so we’re kind of vested in its future.

While I thought Sun paid too much for MySQL, I think Oracle got this one right. The best analysis I’ve seen so far is from Larry Augustin, so if you’re interested in such things be sure to check it out.

I like tattoos. I don’t have one, but I think they’re pretty cool. The reason I don’t have one is that I haven’t really thought of anything I’d want to have to look at on my body for the rest of my life.

I am the same way about stickers on laptops. Some folks like Coté cover their laptops with stickers. 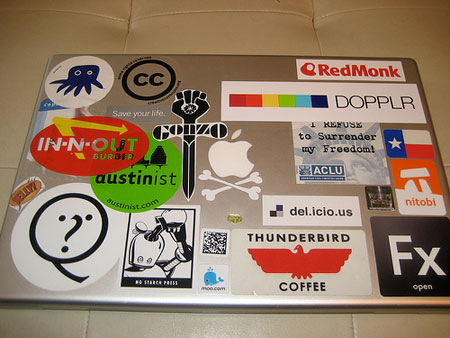 I’ve thought about it, but never found ones I liked enough to use.

That was until I saw the “Son of Mac” Decal on Cult of Mac. Mine showed up today. 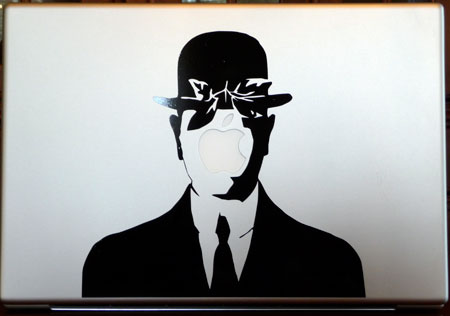 I’ve always been a fan of Magritte, and it should have dawned on me that the “apple” theme in his work would translate well to the Mac, but once I saw this sticker I knew I had to have it. 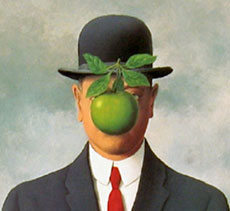 Okay, my day was going pretty well. I’m am trying desperately to finish an RFP. I’d caught up on mail and tickets, and although I’d rather be outside (since it is a beautiful spring day) I finally got focused on getting my reply written.

I take a little break and what should I find on my RSS feed but a post by Matt “I live to press Tarus’s buttons” Asay featuring a cute little VW microbus and my blood pressure went skyward again. 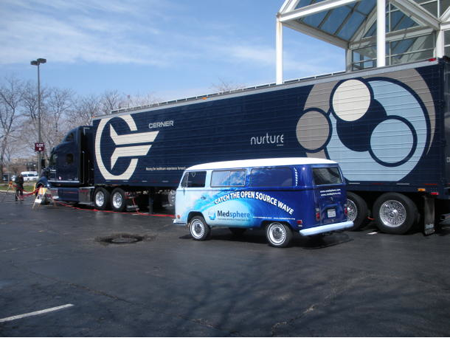 If you want to see me rant about the abuse of the term “open source” you really have to look no further than Medsphere. In fact “Remember Medsphere!” is my rallying cry to caution other entrepreneurs about being careful while seeking investment.

Medsphere was founded by the Drs. Shreeve (Scott and Steve). They accepted investment, proceeded to develop their software, released it on Sourceforge and were promptly sued by their investors for US$50 million. The suit listed twelve counts including violations of RICO, which if found true could have left the Shreeves penniless.

An interview with Fred Trotter gives a good summary of the situation.

They eventually settled the lawsuit, but I don’t know the details. Steve Shreeve blogged about the situation while he was still involved with the company, but he hasn’t posted in nearly 2.5 years and as far as I can tell he and his brother are not involved with the company they founded. I can’t help feeling that he knew these actions had destroyed Medsphere’s open source credibility and he was trying to boost it back up, but his non-involvement with the company seems to provide proof that it wasn’t to be.

Cool bus or not, I find it hard to believe that Medsphere is the example we in open source should be striving to emulate. It is the prime example of a company using the term “open source” to market proprietary software. It takes more than a hippie bus to embrace hippie ideals, but I think in almost every value system Medsphere got it wrong.

I have a little HTTP collector running to collect Google hits on various open source and open core projects, and I noticed that the hit count for Hyperic had gone through the roof (surpassing Nagios). I don’t understand Google’s algorithm and these kinds of spikes are pretty common, but I was curious to see if there was any particular bit of news that caused the spike so I did a search. 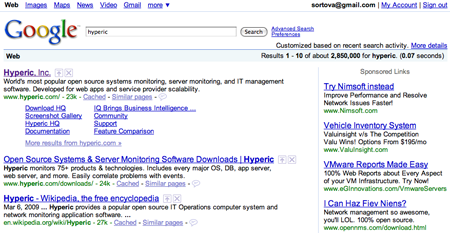 Then I happened to glance over in the corner to see our AdWord show up against the search. At OpenNMS we don’t have any full-time sales and marketing people, but we got a coupon for some free AdWord links and decided to have some fun with it. This was one of mine (although I must admit I stole it from a bash.org quote featuring “I Can Haz Fiev Niens?”).

Should I quit my day job?

One thing I can say about most people in open source: they are a pretty clever bunch.

As I was going through the support queue today, I saw this response to Jeff from one of our clients concerning an especially tricky data collection issue he was having:

WOW, what a very detailed response.. Thanks! Changes made, working, and you can close this incident…

Thanks again for all you guys do!!

What a great way to start the day.