I spent last week back in the United Kingdom. I always find it odd to travel to the UK. When I’m in, say, Germany or Spain, I know I’m in a different country. With the UK I sometimes forget and hijinks ensue. As Shaw may have once said, we are two countries separated by a common language.

Usually I spend time in the South, mainly Hampshire, but this trip was in Yorkshire, specifically West Yorkshire. I was looking forward to this for a number of reasons. For example, I love Yorkshire Pudding, and the Four Yorkshiremen is my favorite Monty Python routine.

Also, it meant that I could fly into Manchester Airport and miss Heathrow. Well, I didn’t exactly miss it.

I was visiting a big client that most people have never heard of, even though they are probably an integral part of your life if you live in the UK. Arqiva provides the broadcast infrastructure for much of the television and mobile phone industry in the country, as well as being involved in deploying networks for projects such as smart metering and the Internet of Things.

We were working at the Emley Moor location, which is home to the Emley Moor Mast. This is the largest freestanding structure in Britain (and third in the European Union). With a total height of 1084 feet, it is higher than the Eiffel Tower and almost twice as high as the Washington Monument. 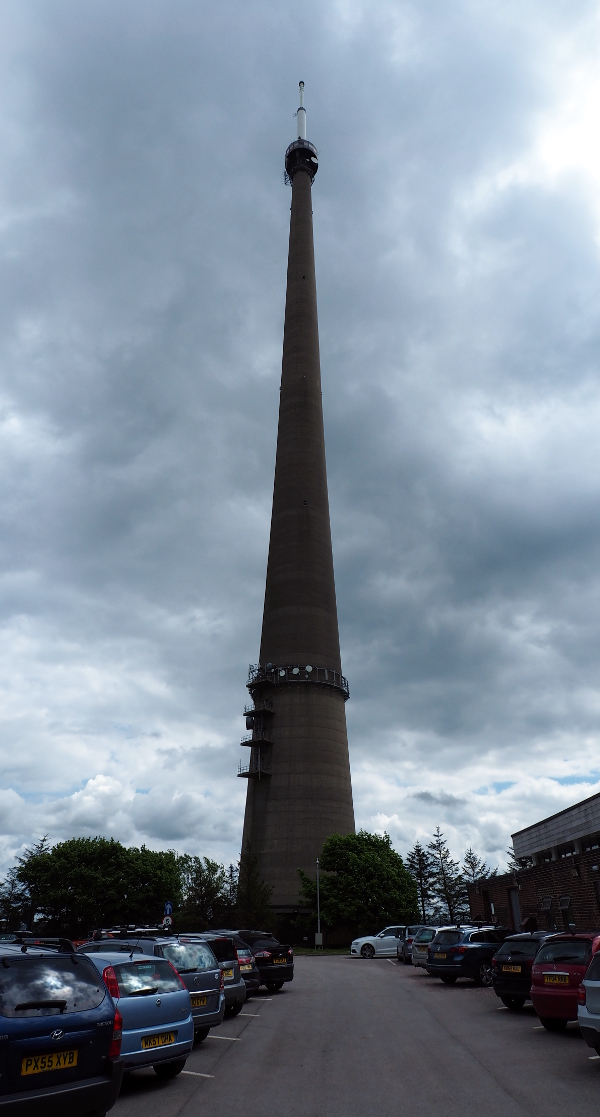 The mast was built in 1971 to replace a metal lattice tower that fell, due to a combination of ice and wind, in 1969. I love the excerpt from the log book mentioned in the Wikipedia article:

They still have that log book, open to that page. 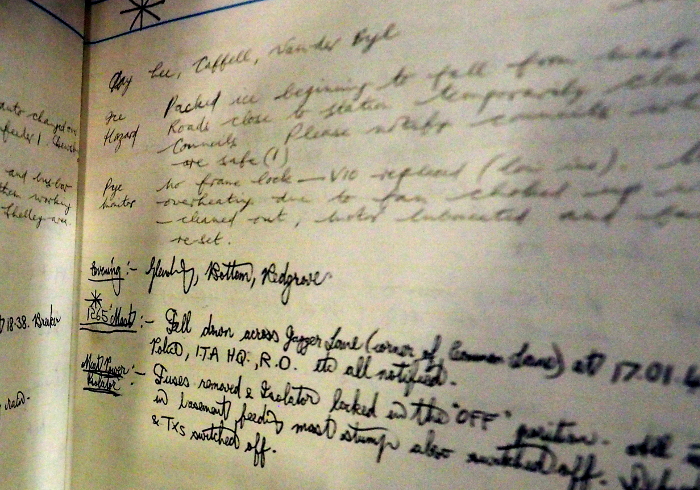 If you have 20 minutes, there is a great old documentary on the fall of the old tower and the construction of the new mast.

On my last day there we got to go up into the structure. It’s pretty impressive: 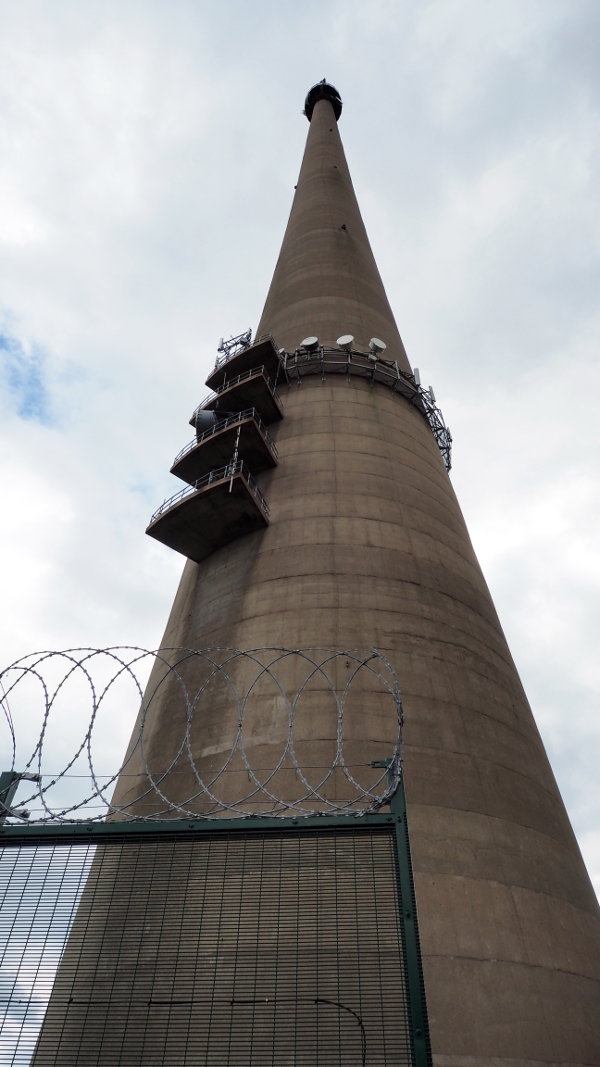 and the inside looks like something from a 1970s sci-fi movie: 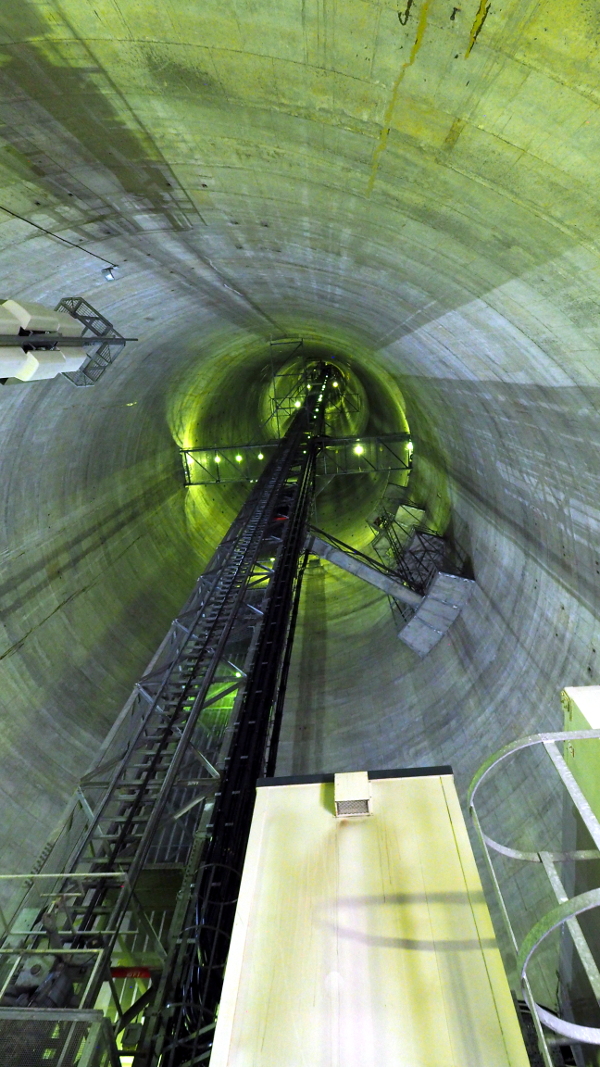 The article stated that it takes seven minutes to ride the lift to the top. I timed it at six minutes, fifty-seven seconds, so that’s about right (it’s fifteen seconds quicker going down). I was working with Dr. Craig Gallen who remembers going up in the open lift carriage, but we were in an enclosed car. It’s very small and with five of us in it I will admit to a small amount of claustrophobia on the way up.

But getting to the top is worth it. The view is amazing: 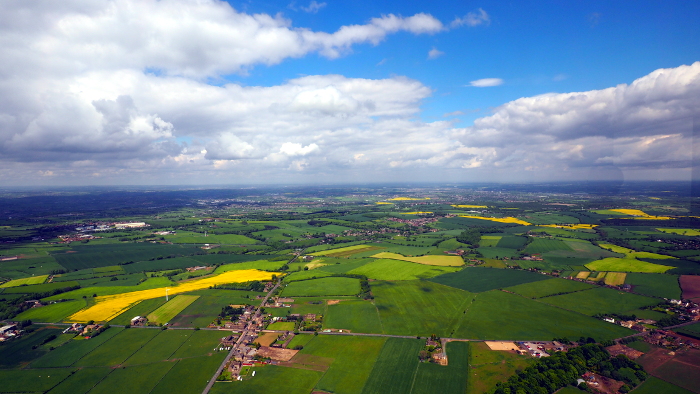 It was a calm day but you could still feel the tower sway a bit. They have a plumb bob set up to measure the drift, and it was barely moving while we were up there. Toby, our host, told of a time he had to spend seven hours installing equipment when the bob was moving four to five inches side to side. They had to move around on their hands and knees to avoid falling over. 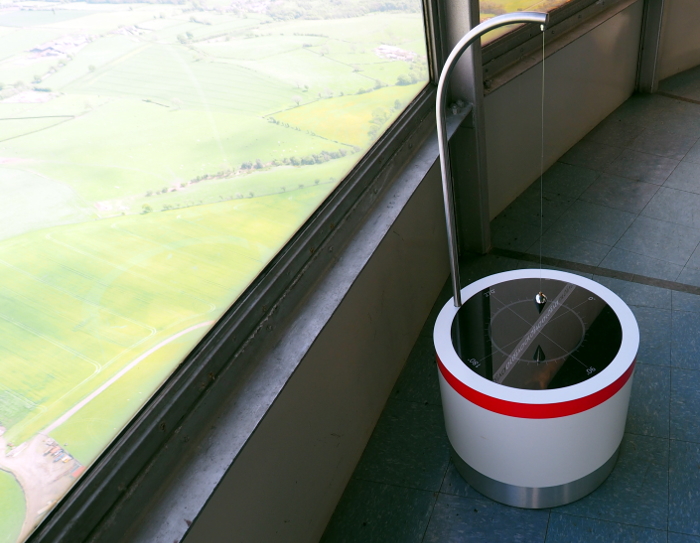 I’m glad I wasn’t there on that day, but our day was fantastic. Here is a shot of the parking lot where the first picture (above) was taken. 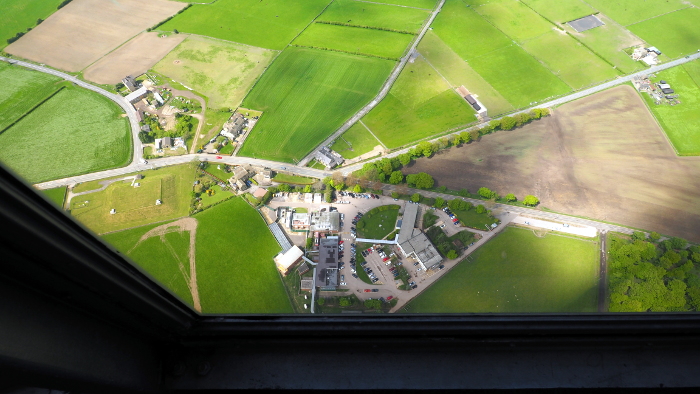 I had a really great time on this trip. The client was amazing, and I really like the area. It reminds me a bit of the North Carolina mountains. I did get my Yorkshire Pudding in Yorkshire (bucket list item): 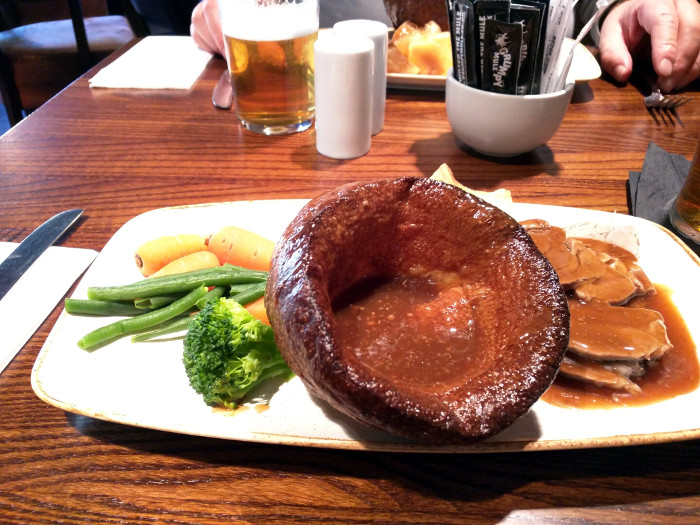 and one evening Craig and I got to meet up with Keith Spragg. 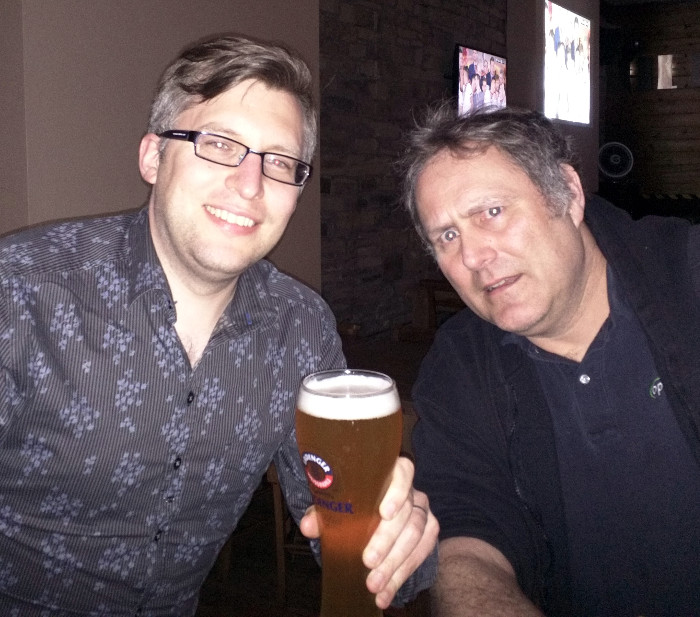 Keith is a regular on the OpenNMS IRC channel (#opennms on freenode.net), and he works for Southway Housing Trust. They are a non-profit that manages several thousand homes, and part of that involves providing certain IT services to their tenants. They are mainly a Windows/Citrix shop but OpenNMS is running on one of the two Linux machines in their environment. He tried out a number of solutions before finding that OpenNMS met his needs, and he pays it forward by helping people via IRC. It always warms my heart to see OpenNMS being used in such places.

I hope to return to the area, although I was glad I was there in May. It’s around 53 degrees north latitude, which puts it level with the southern Alaskan islands. It would get light around 4am, and in the winter ice has been known to fall in sheets from the Mast (the walkways are covered to help protect the people who work there).

I bet Yorkshire Pudding really hits the spot on a cold winter’s day.

I am extremely happy to announce the availability of Horizon 18, codenamed “Tardigrade”. Ben is responsible for naming our releases and he’s decided that the theme for Horizon 18 will be animals. The name “Tardigrade” was suggested in the IRC channel by Uberpenguin, and while they aren’t the prettiest things, Wikipedia describes them as “perhaps the most durable of known organisms” so in the context of OpenNMS that is appropriate. 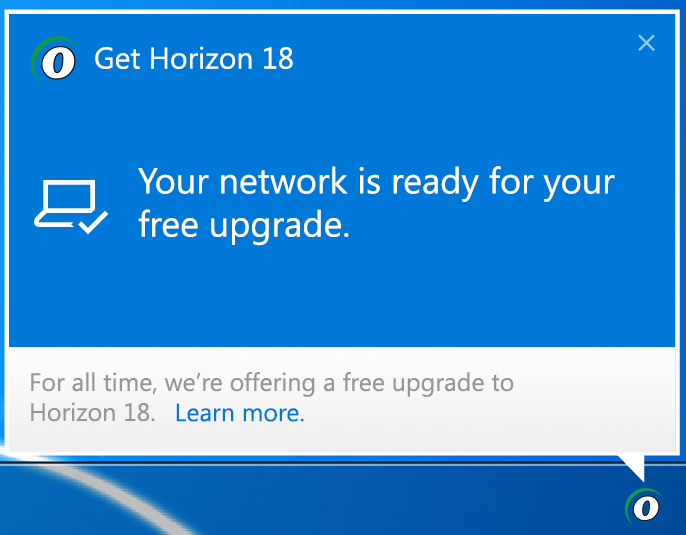 I am also happy to see the Horizon program working. When we split OpenNMS into Horizon and Meridian, the main reason was to drive faster development. Now instead of a new stable release every 18 months, we are getting them out every 3 to 4 months. And these are great releases – not just major releases in name only.

The first thing you’ll notice if you log in to Horizon 18 as a user in the admin role is that we’ve added a new “opt-in” feature that let’s us know a little bit about how OpenNMS is being used by people. We hope that most of you will choose to send us this information, and in the spirit of the Open Source Way we’ve made all of the statistics available publicly. 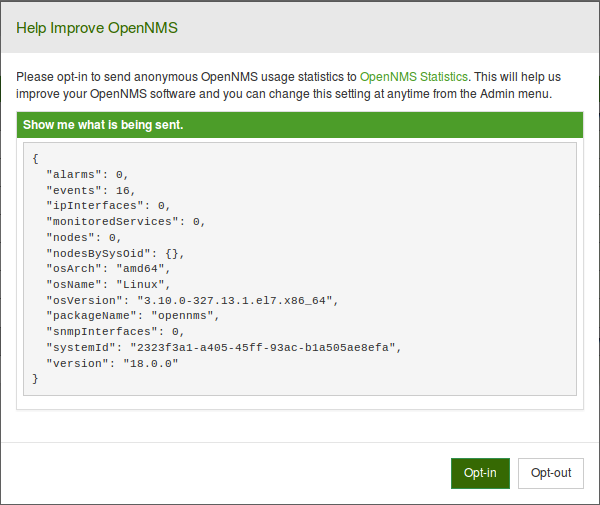 One of the key things we are looking for is the list of SNMP Object IDs. This will let us know what devices are being monitored by our users and to increase their level of support. Of course, this requires that your OpenNMS instance be able to reach the stats server on the Internet, and you can change your choice at any time on the Configuration admin page under “Data Choices”. It will only send this information once every 24 hours, so we don’t expect it to impact network traffic at all.

Once you’ve opted in, the next thing you’ll probably notice is new problem lists on the home page listing “services” and “applications”. 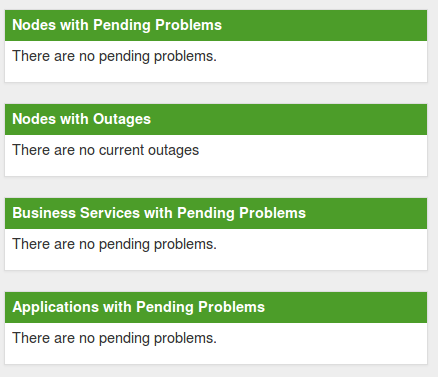 This related to the major feature addition in Horizon 18 of the Business Service Monitor (BSM). 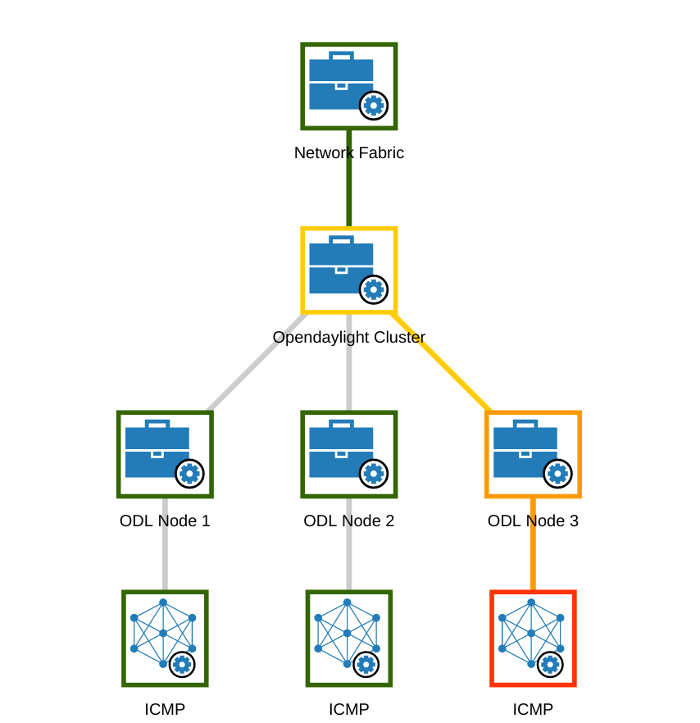 As people move from treating servers as pets to treating them like cattle, the emphasis has shifted to understanding how well applications and microservices are running as a whole instead of focusing on individual devices. The BSM allows you to configure these services and then leverage all the usual OpenNMS crunchy goodness as you would a legacy service like HTTP running on a particular box. The above screenshot comes from some prototype work Jesse has been doing with integrating OpenNMS with OpenDaylight. As you can see at a glance, while the ICMP service is down on a particular device, the overall Network Fabric is still functioning perfectly.

Another thing I’m extremely proud of is the increase in the quality of documentation. Ronny and the rest of the documentation team are doing a great job, and we’ve made it a requirement that new features aren’t complete without documentation. Please check out the release notes as an example. It contains a pretty comprehensive lists of changes in 18.

Horizon 17 is one of the most powerful and stable releases of OpenNMS ever, and we hope to continue that tradition with Horizon 18. Hats off to the team for such great work.

Here is a list of all the issues addressed in Horizon 18: