As with other open source projects, we sometimes get criticized for the lack of detailed documentation. We are working to overcome that, but nothing can replace a couple of days of hands-on training with OpenNMS for getting over the learning curve quickly.

We have partnered with the Software Association of Oregon to provide a version of our three day “LX” course :

If you are interested in this, be sure to register early, as space is limited.

This course will cover in detail getting OpenNMS installed and customized, and since it is a hands-on course it will definitely cover troubleshooting problems. Also, on the third day we will take a peek at the development branch of OpenNMS, which will become OpenNMS 2.0.

Today I read on Slashdot that the Expo was open at LinuxWorld Expo in San Francisco.

At last year’s show, OpenNMS won a Product Excellence Award for systems management, and it was pretty exciting. It was our second LWE (we were also at the one in Boston earlier in 2005) in the .org Pavilion, and we figured with our award win we’d be invited back.

In 2005 the process for getting a space in the .org Pavilion was pretty straightforward. A guy named Duncan Newell managed it, and we were kept pretty up to date about our status. But Duncan has now left and there is a void where he used to be. I tried to figure out who to contact this year, but by the time I reached the “right person” all the spaces in Boston were gone. I asked to be kept in mind for San Francisco. A couple of months go by and I hear nothing, so I write back only to be told that you had to sign up in Boston for the SF show.

Robin Miller came up to me last year and asked me if winning the award actually meant something. I said “yes” – while it’s just a piece of glass it stands as a monument to all of those sysadmins in the trenches who stood up to their PHB’s and proposed OpenNMS versus a commercial app. Here, at least, was some external validation that might make that process easier. Unfortunately it didn’t seem to mean much to the LinuxWorld folks.

It’s funny. We could probably afford to get a booth at the show, but it is important to me to be part of the .org “Geek Ghetto”. OpenNMS is at its heart a .org effort and I think that gets lost in the big money Linux arena these days (there was a mechanical bull downstairs at the last show, but I was more impressed by the BSD toaster).

One last footnote: After I missed Boston I received one of those little surveys via e-mail “Why Didn’t You Come to LinuxWorld Boston?” I filled it out, honestly, and happened to win one of the US$100 American Express gift certificates. Go figure.

At least we haven’t been overlooked by the rest of the world. We will be at the LinuxWorld Expo in London in October in the .org Village. That is managed by Brian Teeman of Joomla! fame and he does a great job with it. We were there last year as well as at the LinuxWorld Expo in the Netherlands. We had a chance to go to Korea in June but cancelled due to the lack of a Korean-speaking project member.

So, outside of LinuxWorld, where should a project like OpenNMS go? OSCON is a contender, but they keep turning down my paper suggestions. (grin)

While not open-source centric, we should be at LISA in DC in December. LISA is a serious geek conference, and I look forward to be asked questions like “How are you different from Nagios” over and over again this year. (grin)

Okay, so I was going to be a good boy and blog religiously about Dev-Jam, and I made it to Day 2. Not so good. Well, it was good in the fact that we had so much going on that blogging was the last thing on my mind, but I had still hoped to capture some of the energy in words.

We had two gents from the UK and Antonio came in from Naples, and being the type of person Antonio is he wanted to cook for us. This was kind of hard in the college dorm kitchen, but we made do. With prosciutto and melon on paper plates, and red wine in paper cups, we awaited the finish to the ragu and its 4+ hour cooking time. It was delicious. 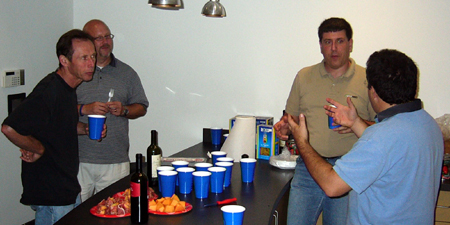 Once we got over the hump of learning Spring, work progressed pretty rapidly. We are aiming to have a 1.3.2 release for 1 September. It should include work like Antonio’s maps, but unless you have a Windows box don’t get your hopes up for it just yet. In order to use SVG and do a POST, you have to use the SVG 1.2 spec. Unfortunately, the only viewer is a beta viewer (dated from 2003) from Adobe that is Windows only. I’m not a fan of maps, but I have to say that work is pretty impressive.

Lots of other goodies, including a new look to the webUI, snooze on outages, graph improvements, etc. Be on the lookout for it.