The Ohio Linuxfest was one of the first open source conferences I ever attended, way back in 2010. I had heard about it from the local Linux Users Group, TriLUG, and we ended up renting a van and taking a couple of other open source geeks with us, including “Mr. IPv6” Kevin Otte.

It was a blast.

This year looks like another great show, with one of my favorite people, Karen Sandler, giving a keynote on Friday and yours truly will be giving the last keynote on Saturday.

If you are into free and open source software and are able to make it, I strongly encourage you to check out the conference. You’ll be glad you did.

Back in June I was chatting with “mobius” about all things OpenNMS. He lives and works in Perth, Australia, and suggested that I do a presentation at AusNOG, the Australian Network Operators Group.

One of the things we struggle with at OpenNMS is figuring out how to make people aware it exists. My rather biased opinion is that it is awesome, but a lot of people have never heard of it. To help with that I used to attend a lot of free and open source conferences, but we’ve found out over the years that our user base tends to be more along the lines of large enterprises and network operators that might not be represented at such shows.

Imagine my surprise when I found out that there were a whole slew of NOGs, network operator groups, around the world. It seems to me that people who attend these conferences have a more immediate need for OpenNMS, and with that in mind I submitted a talk to AusNOG. I was very happy it was selected, not in the least because I would get to return to Australia for a third time. 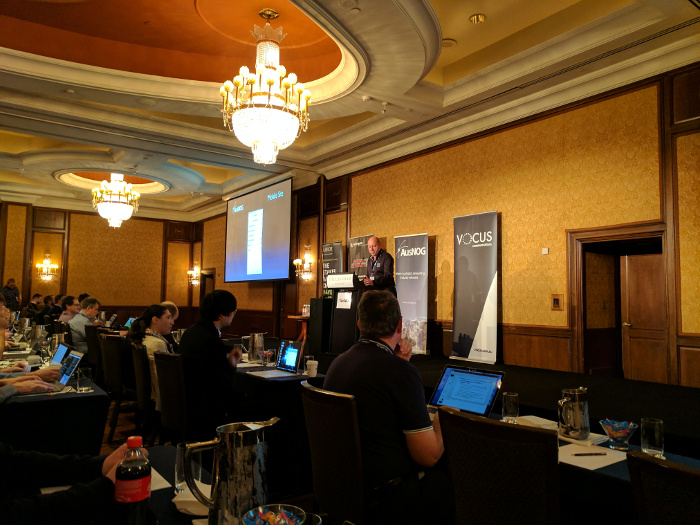 I wasn’t sure what to expect, but was pleasantly surprised. The event was extremely well organized and I really liked the format. Many conferences as they become successful respond by adding multiple tracks. This can be useful if the tracks are easy to delineate, but often you can get “track bloat” where the attendees get overwhelmed with choice and as a presenter you can end up with a nearly empty room if you are scheduled against a popular speaker. At AusNOG there is only one track of somewhat short, highly curated talks that results in a very informative conference without the stress of trying to determine the best set of talks to attend. 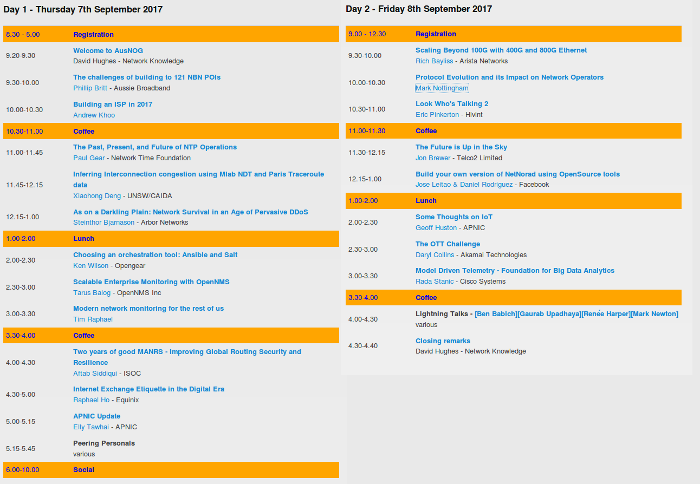 The venue was very nice as well. Held at the Langham Hotel, the conference took place in a ballroom that held the 200+ people with a lobby out front for socializing and a few sponsor booths. The program consisted of 90 minutes of presentations separated by a break. They alternated sets of three 30 minute talks with two 45 minutes talks. I found all of the presentations interesting, but I have to admit that I spent a lot of time looking up unfamiliar acronyms. As network operators Autonomous System (AS) numbers were thrown around in much the same way SNMP Private Enterprise Numbers are shared among network management geeks. Australia is also in the process of implementing a nationwide National Broadband Network (nbn™) to provide common infrastructure across the country, so of course that was the focus of a number of talks.

In the middle of each day we broke for lunch which was pretty amazing. The Langham restaurant had a sushi section, a section for Indian food, a large buffet of your standard meat and veg, and at least three dessert sections: one with “healthy” fruit and cheese, another focused on ice cream and a chocolate fountain, and a large case full of amazing pastries and other desserts. All with a view out over the Yarra river. 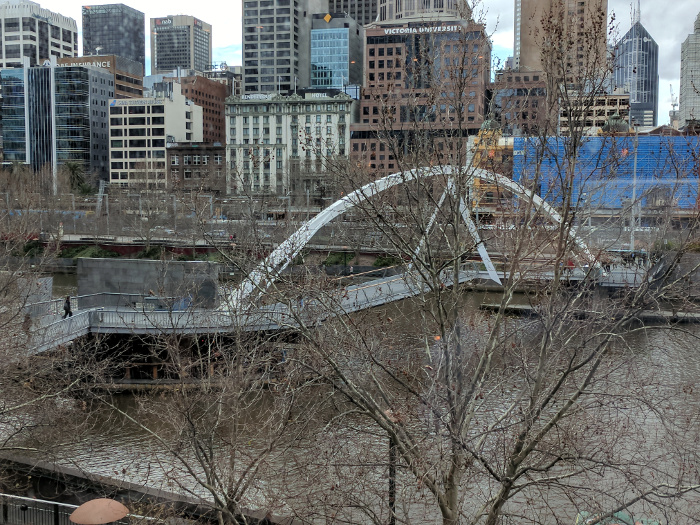 I really liked the format of AugNOG and suggest we adopt it for the next OpenNMS conference. For those few talks that were either over my head or not really of interest, they were over pretty quickly, but I found myself enjoying most of them. I thought it was interesting that concepts we usually equate with the managing servers are being adopted on the network side. One talk discussed topics such as running switch software in containers, while another discussed using Ansible and Salt to manage the configuration of network gear. 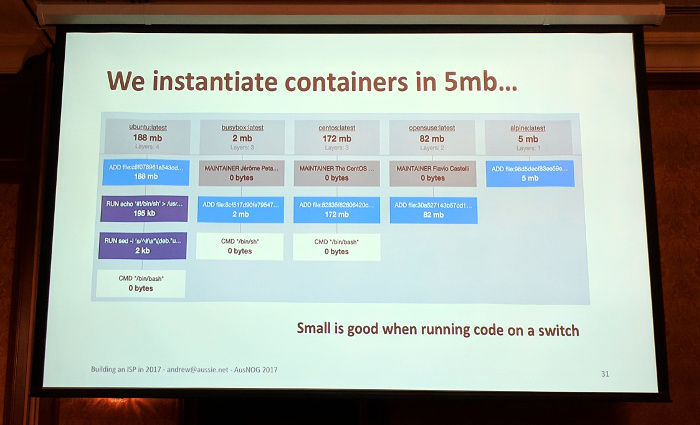 I was happy to see that my talk wasn’t the only one that focused on open source. Back fifteen years ago getting large companies to adopt an open source solution was still in the evangelical stage, but now it is pretty much standard. Even Facebook presented a talk on their open source NetNORAD project for monitoring using a distributed system to measure latency and packet loss.

I did have a few favorite talks. In “The Future Is Up in the Sky” Jon Brewer discussed satellite Internet. As someone who suffered for years with a satellite network connection, it was interesting to learn what is being done in this area. I used a system with a satellite in geosynchronous orbit which, while it worked, ended up with latency on the order of a second in real-world use. It turns out that there are a number of solutions using shorter distances with satellites in low earth or high earth orbit. While they present their own challenges, it is still the most promising way to get network access to remote areas.

Another talk by Mark Nottingham discussed issues associated with the increased use of encrypted protocols and the challenges they create for network operators. While the civil libertarian in me applauds anything that makes it harder for surveillance to track users, as a network monitoring guy this can make it more difficult to track down the cause of network issues.

And this will become even more important as the network changes with the adoption of Internet of Things (IoT) devices. Another good talk discussed the issue of IoT security. Even today the main consensus is that you protect weakly secured devices with a firewall, but a number of new exploits leverage infected systems within the firewall for DDoS attacks. 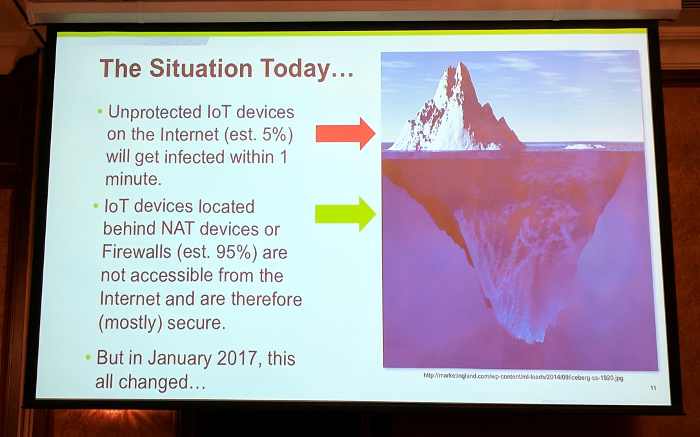 I think my own talk went well, it was hard to squeeze a good introduction to OpenNMS into 30 minutes. I did manage it – 30 minutes on the nose – but it didn’t leave time for questions. As a speaker I really liked the feedback the conference provided in the form of a rather long report showing what the attendees thought of the talk, complete with cool graphs. 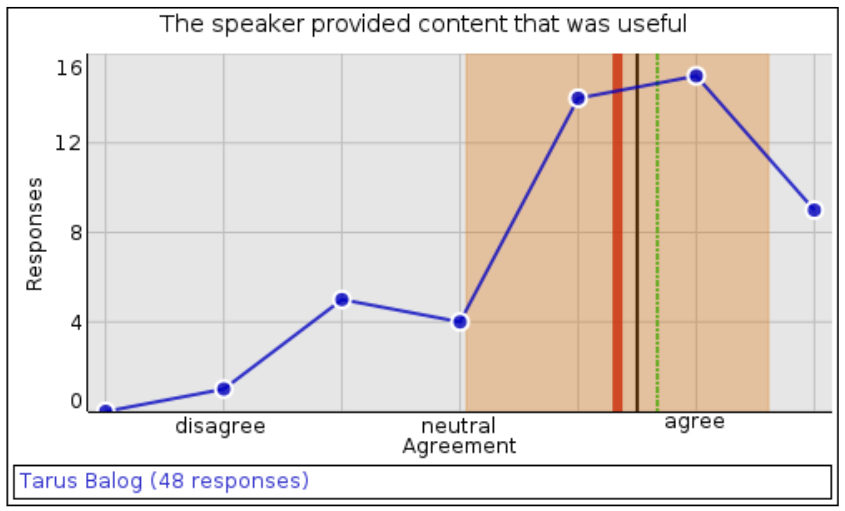 I really enjoyed this conference, both as an attendee and a speaker. While I hope to speak to more NOGs I would much rather encourage OpenNMS users who are happy with the project to submit real-world talks on how they use the platform to their local tech groups. I think it tells a much stronger story to have someone a little less biased than myself talking about OpenNMS, and plus you get to visit cool conferences like AusNOG.

As someone who has used OpenNMS for, well, many years, I think it is a breeze to get installed. Simply add the repository to your server, install the package(s), run the installer and start it.

However, there are a number of new users who still have issues getting it installed. This is not a problem limited just to OpenNMS but can be a problem across a number of open source projects.

Enter Bitnami. Bitnami is a project to package applications to make them easier to install: natively, in the cloud, in a container or as a virtual machine. Ronny pointed out that OpenNMS is listed in their “wishlist” section, and if we can get enough votes, perhaps they will add it to their stack.

Bitnami also happens to have a great team, lead in part by the ever amazing Erica Brescia. As I write this we have less that 50 votes, with the current leaders being over 1200, so there is a long way to go. I’d appreciate your support, and once you vote you get a second chance to vote again via the socials.

Thanks, and thanks to Bitnami for the opportunity.

I am excited to be returning to Australia for the third time next week. This trip is to speak at the Australian Network Operators Group (AusNOG) annual conference in Melbourne. 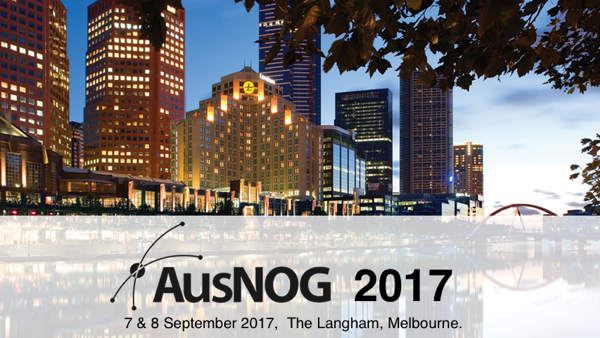 I can’t believe I’ve gone for so long and not known about Network Operator Groups (NOGs). There are quite a few of them and I think they would be a perfect audience to introduce to the OpenNMS Project. One of our users on the OpenNMS chat server is from Perth and he made me aware of the conference, and I was humbled and delighted to have my presentation accepted.

At OpenNMS we strive very hard to separate the project (.org) from the commercial entity that supports the project (.com) and this presentation will be strictly focused on the project. It’s a wonderful thing about OpenNMS: if it meets your needs, cool. If not, also cool. I just want more people to be aware of open source options, especially in the carrier and enterprise space.

And it looks like open source is definitely making inroads at AusNOG. The talk before mine is about Ansible and Salt. There is another talk on using open source to build a version of NetNorad, and another one on open source for big data analytics. The one after mine is about modern network monitoring, so I hope I tick at least a few boxes on his list.

I hope to see you there (although it looks like it is sold out) but let me know if you are in the area and perhaps I can at least say “hi”.