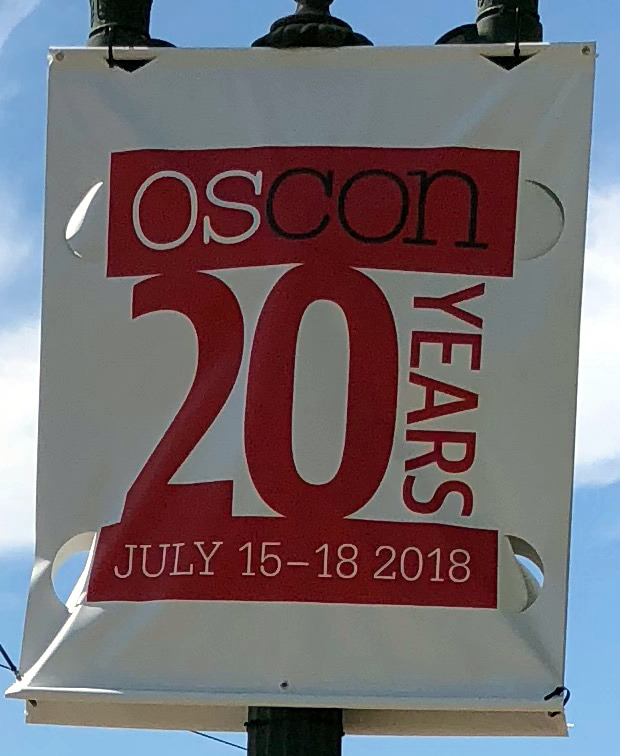 This is the premiere open source conference in the US, if not the world, and it is rather well run. It is equal to if not better than a lot of proprietary technology conferences I’ve attended, perhaps because it is pretty much a proprietary software conference in itself. I found it a little ironic that the Wednesday morning keynotes started off with a short, grainy video clip where an open source geek shouts out “We’re starting a revolution!”.

I tried to find the source of that quote, and I thought it came from the documentary “Revolution OS“. That movie chronicles the early days of open source software in which the stated goal was to take back software from large companies like Microsoft. There is a famous quote by Eric S. Raymond where he replies to a person from Microsoft with the words “I’m your worst nightmare.” Microsoft is now a major sponsor of OSCON.

When I attended OSCON in 2014 I asked the question “Is Open Source Dead?” Obviously the open source development model has never been more alive, but I was thinking back to my early involvement with open source where the idea was to move control of software out of the hands of big companies like IBM and Microsoft and into the hands of the users. Back then the terms “open source” and “free software” were synonymous. It was obvious that open source operating systems, mainly Linux, would rule the world of servers, so the focus was on the desktop. No one in open source predicted the impact of mobile, and by extension, the “cloud”. Open source today is no more than a development model used mostly to help create proprietary software, usually provided as a subscription or a service over the network. I mean, it makes sense. Companies like Google, Facebook and Amazon wouldn’t exist today if it wasn’t for Linux. If they had to pay a license to Microsoft or Sun (now Oracle) for every server they deployed their business models simply wouldn’t work, and the use of open source for building the infrastructure for applications simply makes sense.

This trend was seen throughout OSCON. The “diamond” sponsors were companies like IBM, Microsoft, Amazon and Google. The main buzzword was “Kubernetes” (or “K8s” if you’re one of the cool kids) which is an open source orchestration layer for managing containers. Almost all of the expo companies were cloud companies that either used open source software to provide a platform for their applications or to create open source agents that would feed back to their proprietary cloud back-end.

I attended my first OSCON in 2009 as a speaker, and I was a speaker for several years after that. My talks were always well-attended, but then for several years none of my paper submissions were accepted. I thought I had pissed off one or more of the organizers (it happens) but perhaps my thoughts on open source software had just become outdated.

I still like going to the conference, even though I no longer attempt to submit a talk. When I used to speak I found I spent most of my time on the Expo floor so now I just try to schedule other business during the week of OSCON and I get a free “Expo only” pass. You also get access to the keynotes, so I was sure to be in attendance as the conference officially started. 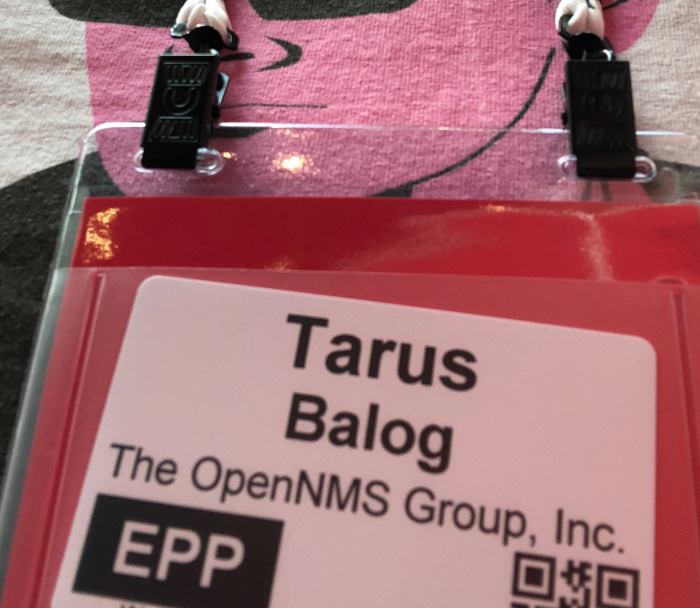 My favorite keynote was the first one, by Suz Hinton from Microsoft. She is known for doing live coding on the streaming platform Twitch, and she did a live demonstration for her keynote. She used an Arduino to control a light sensor and a servo. When she covered the sensor, the servo would move and “wave” at the OSCON audience. It was a little hard to fight the cognitive dissonance of a Microsoft employee using a Mac to program an open hardware device, but it was definitely entertaining. 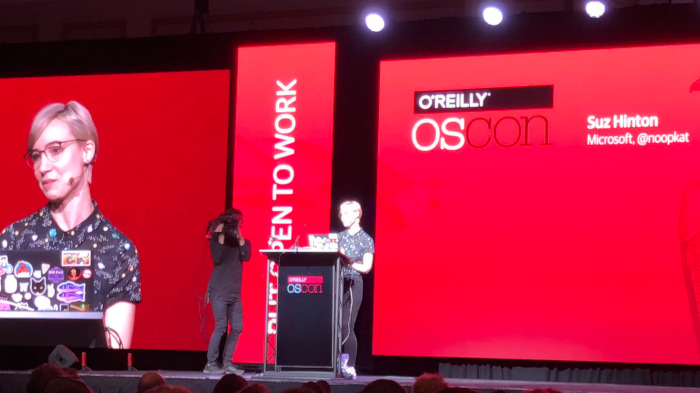 My second favorite talk was by Camille Eddy. As interactions between computers and humans become more automated, a number of biases are starting to appear. Google image search had a problem where it would label pictures of black people as “gorillas”. An African-American researcher at MIT named Joy Buolamwini found that a robot recognized her better if she wore a white mask. Microsoft had an infamous experiment where it created a Twitter bot named “Tay” that within 24 hours was making racist posts. While not directly related to open source, a focus on an issue that affects the user community is very much in the vein of classic open source philosophy.

The other keynotes were from Huawei, IBM and Amazon (when you are a diamond sponsor you get a keynote) and they focused more on how those large software companies were using the open source development model to, well, offset the cost of development. 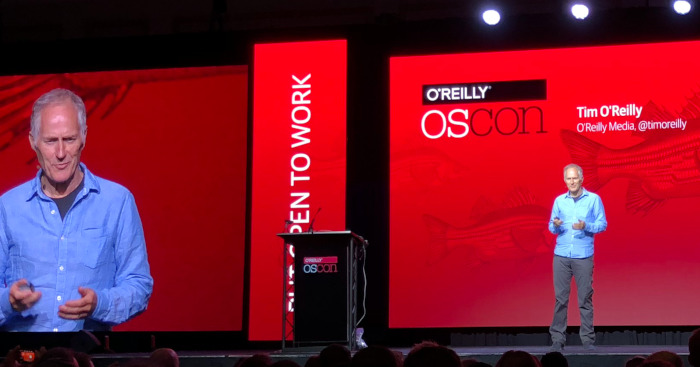 The Wednesday keynotes closed with Tim O’Reilly who talked about “Open Source and Open Standards in the Age of Cloud AI”. It kind of cemented the theme for me that open source had changed, and the idea is now much more about tools development and open APIs than in creating user-owned software. 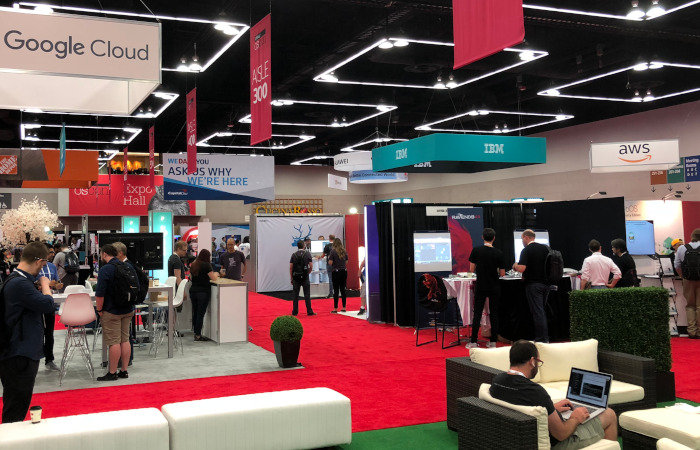 The rest of my time was spent wandering the Expo floor. OSCON offers space to traditional open source projects which I usually refer to as the “Geek Ghetto”. This year it was split to be on either side of the main area, and I got to spend some time chatting with people from the Software Freedom Conservancy and the Document Foundation, among others. 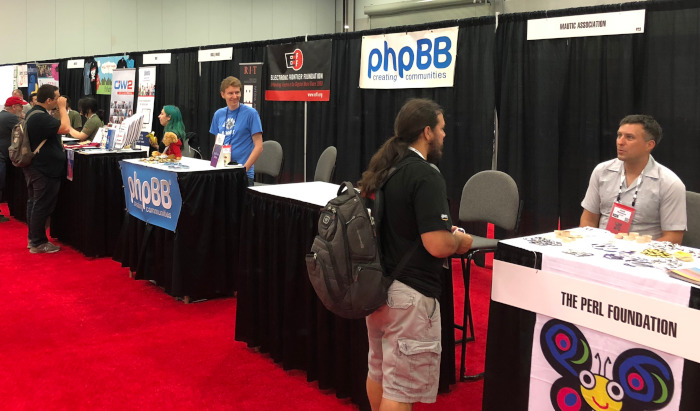 I enjoyed the conference, even if it was a little bittersweet. Portland is a cool town and the people around OSCON are cool as well. If I can combine the trip with other business, expect to find me there next year, wandering the Expo floor. 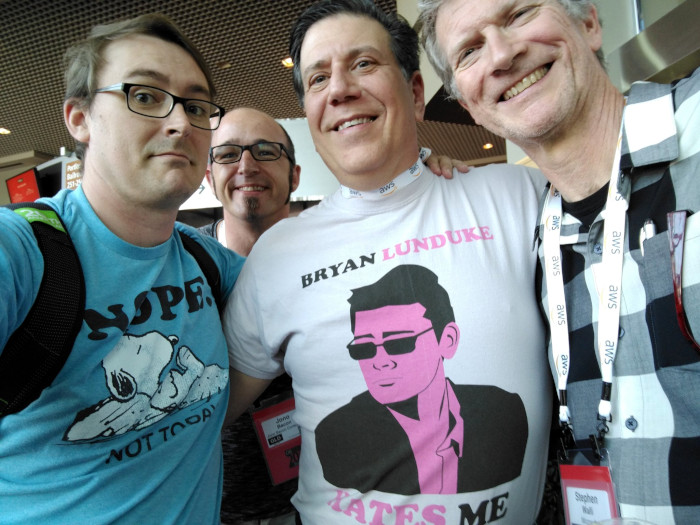