This is one of my more navel-gazing posts (well, more than usual) with little open source or OpenNMS content, so if you don’t like this sort of thing, please skip it.

I am not very politically savvy. I’m a geek and I studied to be a scientist so the unvarnished truth is pretty much my goal. It’s one of the reasons I like open source – everything is out in the open, including the code and bugs. This is at odds with traditional software since there was always a much greater focus on marketing. The goal was to sell as many licenses as possible, not necessarily to solve problems in the best way. Open source has no license cost, so one can be more honest. I frequently recommend that certain people who contact us check out Solarwinds, since they are either too small or don’t have a qualified person on staff to get the full advantage of OpenNMS. As a provider of services, my margins are built on a certain level of effort per client, and if there are bad matches, one or two clients could sink those margins.

Yet it seems that certain people in the open source software business can only understand selling commercial software, and so I often feel like an outsider when I try to explain that it is possible to make money without compromising the open source nature of a project.

I feel similarly disenfranchised when it comes to politics. I belong to no political party, although many, many years ago I was a registered Republican (back when they were the fiscally conservative and pro-technology party, so a long time ago). It seems that both parties have been so overtaken by extremists that there is no room for someone like me: a moderate who is willing to compromise and engage in honest debate over the issues.

With the upcoming elections, never before have I felt such distaste over my choices. In my congressional district I can vote for Bob Etheridge, an incumbent who has such little self control that he assaulted a student who was holding a camera, or Renee Ellmers, who is the kind of insane conservative that caused me to leave the Republican party in the first place. Seriously, the biggest threat to our country right now is whether or not to build a mosque near ground zero? C’mon – if you want my vote tell me in concrete terms what you’d do to make things better and stop playing on emotions and fear.

My general frustration with both the politics of business and the politics in government caused me to fall in love with my latest T-shirt acquisition. 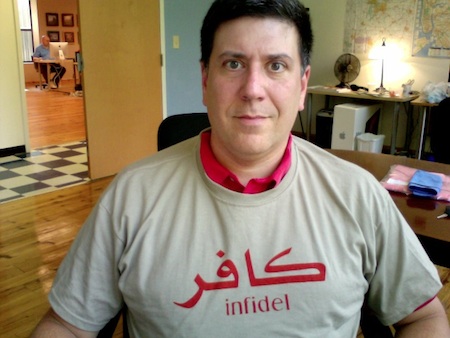 It says “Infidel” in both English and Arabic (well, the Arabic word is actually kafir). It was given to me by Robert Neill when I met him at the Linux Link Tech Show booth at SELF, and if you like it you can order one from his website.

I’m thinking about wearing it to the “Rally to Restore Sanity” at the end of next month in DC. I can’t decide on it or one from the “I’m Voting Tea Party” site since both seem to resonate with me.

Oh, as someone who has spent time in the Middle East (both in Syria and the UAE) I was asked if I would wear this shirt in, say, Dubai. The answer is no. Though I am certain my friend Yunus (a devout Muslim) would find it amusing, some people there would obviously think that I am making fun of their beliefs and would find it insulting. That is not my goal at all.

My goal is to insult those within business who think there is only one way to make money, or those with in politics who are so inflexible that anyone who disagrees with them, even in part, is the enemy.

I am proud to be an infidel in their eyes.

My friend John sent me this neat animation of a talk given by Dan Pink on Motivation. It’s worth watching but feel free to jump to about 7 and a half minutes into it for the open source references.

Kevin Sonney has posted a detailed blog entry on how he is using the OpenNMS remote monitor as a remote poller.

Now one might ask: what is the difference between remote monitoring and remote polling?

Well, when the feature was written, it was created for The Permanente Management Group in northern California. They had centralized a number of services at a data center in Oakland, and doctors and other staff need to access those services from any one of 350 or so offices and clinics around the state. They needed a way to monitor them from the point of view of the remote site: hence remote monitoring. Papa Johns uses this as well: monitor a small number of centralized services from a large number of remote sites (2743 at last count). 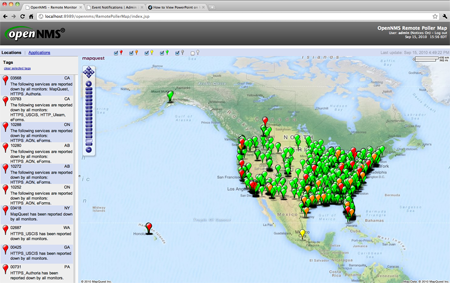 However, what a lot of people think of when they hear “remote monitoring” is actually remote polling: how can I monitor localized services at a remote location? Kevin’s post details that.

In OpenNMS 2.0 the plan is to have multi-level distributed monitoring and data collection, but until that is complete Kevin’s instructions demonstrate how to do it with the current code. Many thanks to him for taking the time to write it up.

The OpenNMS Spec E30 BMW and its driver Jason Tower took the checkered flag at Road Atlanta for the first time this weekend. Jason had his first win and two close second place finishes during the weekend, so I’m sure Road Atlanta is his new favorite track.

This is just a reminder that we still have some seats left in the OpenNMS Training class scheduled for 20 September.

This may be the last class until January and it will be the first class taught on OpenNMS 1.8, so if you are thinking of getting some OpenNMS training this would be a good time.

Just a short note that Ronny Trommer has modernized the OpenNMS VMWare Appliance.

There is a wiki page with details, and it can be downloaded from both the Virtual Appliance Marketplace as well as Sourceforge.

I just wanted to share a site we came across through a response to our survey (which is still open if you haven’t had a chance to check it out). It is called OpenNMS Patterns and Scripts and it is definitely worth a look. It’s subtitled “Implementing OpenNMS in an enterprise IT environment” and it consists of issues that one might face when deploying OpenNMS along with corresponding solutions. Hat tip to Doug Bakewell for making this happen, and I look forward to his future posts.

As I was checking out the OpenNMS iPhone app today, I noticed that it was published on September 1, 2010.

The OpenNMS Group opened for business on September 1, 2004, so happy anniversary to us. We’ve been so busy I almost forgot about it.

One of the traditional gifts for the sixth anniversary is iron, and I have been blessed to work with the best team one could ever hope to put together – they are Iron Men, every one.

For most people, seeing the business behind OpenNMS get another year older is a non-event. But if you had been a part of it, and had to listen to those “in the know” telling you time and time again how you can’t possibly run a business where you give the software away, that you can’t succeed without outside investment and you can’t possibly grow, each year we’re here is more proof that they are wrong.

I love my job, and I just want to thank everyone who makes that possible. Six years down and many more to go.

After nearly a year of work, the OpenNMS iPhone App is now available from iTunes. 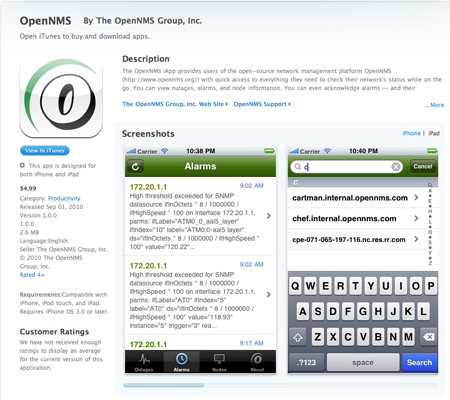 It costs US$4.99 and folks with commercial OpenNMS support subscriptions should just drop me a note for a free voucher code.

As I know there will be a few questions about this, I’ve tried to anticipate a couple of them.

Q: Hey, OpenNMS is free software. Why you chargin’ me $5?

OpenNMS is 100% free and open source software, and the iPhone app is no exception. The code is hosted in our git repository and there are complete instructions for downloading and building it on your own.

But, it was not a painless or inexpensive process to get this app created. In fact, the main reason it got completed is that we sent Ben off to the Apple Worldwide Developers Conference and he learned what he needed to finish it (as well as to make it iPad compatible). That little junket cost us about $2000 – or nearly 575 copies of the app once Apple takes their cut.

So we decided to charge for the app but make sure than those who want to take the time have full access to the code.

Q: What about an Android app?

I would love to have an Android version of this app, but at the moment no one has stepped forward to own it. We do have a Nexus One at the office so the hope is that it will happen, and happen soon, but no promises.