TL;DR; When I found myself in the market for a beefy laptop, I immediately ordered the Serval WS from System76. I had always had a great experience dealing with them, but times have changed. It has been sent back.

I can’t remember the first time I heard about the Serval laptop by System76. In a world where laptops were getting smaller and thinner, they were producing a monster of a rig. Weighing ten pounds without the power brick, the goal was to squeeze a high performance desktop into a (somewhat) portable form factor.

I never thought I’d need one, as I tend to use desktops most of the time (including a Wild Dog Pro at the office) and I want a light laptop for travel as it pretty much just serves as a terminal and I keep minimal information on it.

Recently we’ve been experimenting with office layouts, and our latest configuration has me trading my office for a desk with the rest of the team, and I needed something that could be moved in case I need to get on a call, record a video or get some extra privacy.

Heh, I thought, perhaps I could use the Serval after all.

I like voting for open source with my wallet. My last two laptops have been Dell “Sputnik” systems (2nd gen and 5th gen) since I wanted to support Dell shipping Linux systems, and when we decided back in 2015 that the iMacs we used for training needed to be replaced, I ordered six Sable Touch “all in one” systems from System 76. The ordering process was smooth as silk and the devices were awesome. We still get compliments from our students.

A year later when my HP desktop died, I bought the aforementioned Wild Dog Pro. Again, customer service to match if not rival the best in the business, and I was extremely happy with my new computer.

Jump forward to the present. Since I was in the market for a “luggable” system, performance was more important than size or weight, so I ordered a loaded Serval WS, complete with the latest Intel i9 processor, 64GB of speedy RAM, NVidia 1080 graphics card, and oodles of disk space. Bwah ha ha.

When it showed up, even I was surprised at how big it was. 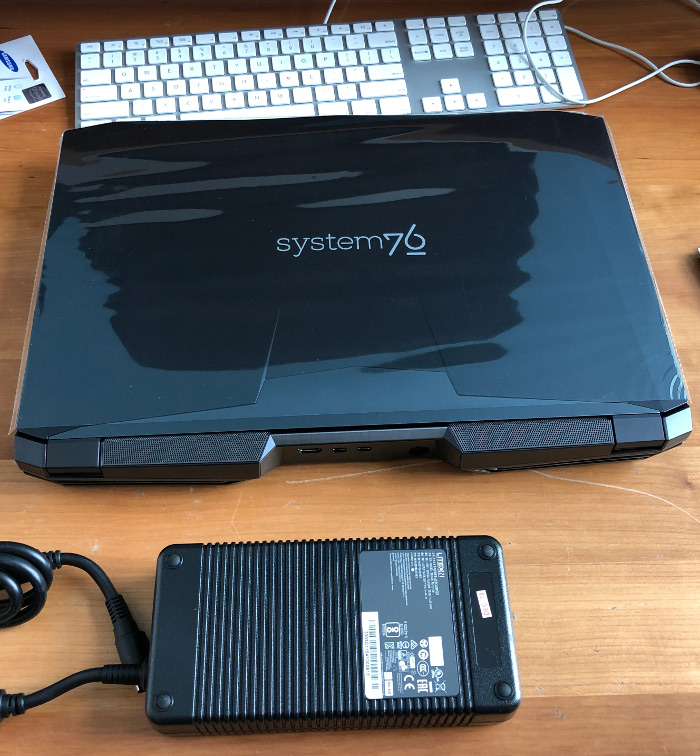 Here you can see it in comparison to a old Apple keyboard. Solidly built, I was eager to plug it in and turn it on. 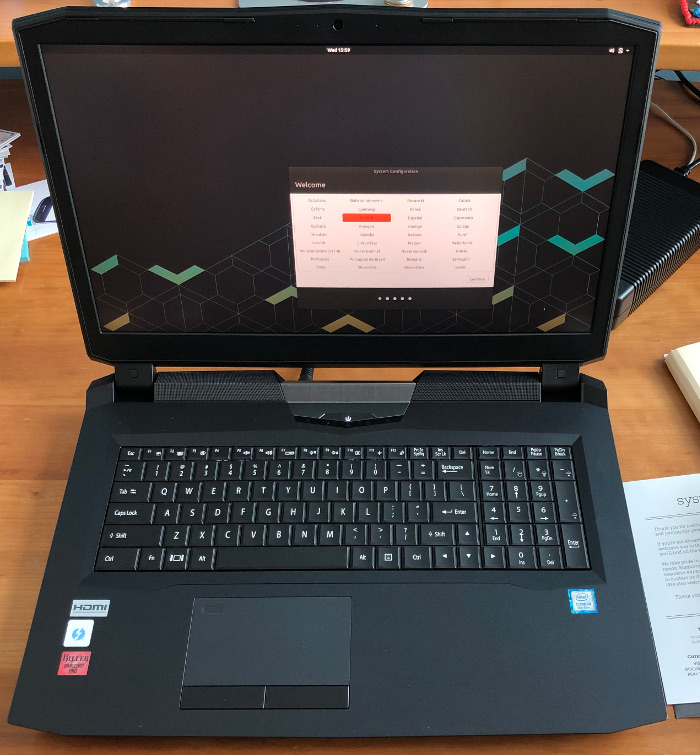 The screen was really bright, even though so was my office at the time. You can see from the picture that it was big enough to contain a full-sized keyboard and a numeric keypad. This didn’t really matter much to me as I was planning on using it with an awesome external monitor and keyboard, but it was a nice touch. I still like having a second screen since we rely heavily on Mattermost and I always like to keep a window in view and I figured I could use the laptop screen for that.

I had ordered the system with Ubuntu installed. My current favorite operating system is Linux Mint but I decided to play with Ubuntu for a little bit. This was my first experience with Ubuntu post Unity and I must say, I really liked it. Kind of made me eager to try out Pop!_OS which is the System76 distro based on Ubuntu.

When installing Mint I discovered that I made a small mistake when placing my Serval order. I meant to use a 2TB drive as the primary leaving a 1TB drive for use by TimeShift for backup. I reversed them. No real issue, as I was able to install Mint on the 2TB drive just fine after some creative partition manipulation.

Everything was cool until late afternoon when the sun went away. I was rebooting the system and found myself looking at a blank screen (for some reason the screen stays blank for a minute or so after powering on the laptop, I assume due to it having 64GB of RAM). There was a tremendous amount of “bleed” around the edges of the LCD. 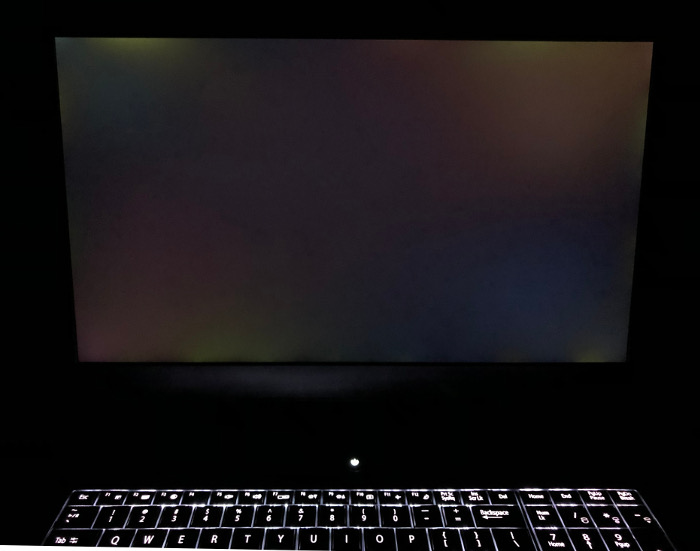 Although it probably wouldn’t have impacted me much in day to day use, especially with an external monitor, I would know about it, and as I’m somewhere on the OCD spectrum it would bother me. Plus I paid a lot of money for this system and want it to be as close to perfect as possible.

For those of you who don’t know, the liquid crystals in LCD displays emit no light of their own and they get their illumination usually from a fluorescent source. If there are issues with the way the LCD panel is constructed, this light can “bleed” around the edges and degrade the display quality (it is also why it is hard to get really black images on LCD displays and this is fueling a lot of the excitement around OLED technology).

I’ve had issues with this before on laptops but nothing this bad. Not to worry, I have System76 to rely on, along with their superlative customer service.

I called the number and soon I was speaking with a support technician. When I described the problem they opened a ticket and asked me to send in a picture. I did and then waited for a response.

I commented on the ticket.

And I continued to wait.

The next day I waited a bit (Denver is two hours behind where I live) but when I got no response I decided, well, I’ll just return the thing. I called to get an RMA number but this time I wasn’t connected with a person and was asked to leave a message. I did, and I should note that I never got that return call.

At this point I’m frustrated, so I decided an angry tweet was in order. That got a response to my ticket, where they offered to send me a new unit.

Yay, here was a spark of the customer service I was used to getting. I’ve noticed a number of tech companies are willing to deal with defective equipment by sending out a new unit before the old unit is returned. In this day and age of instant gratification it is pretty awesome.

I wrote back that I was willing to try another unit, but would it be possible to put Pop!_OS on the new unit on the 2TB drive so that I could try it out of the box and know that all of the System76 specific packages were installed.

A little while later I got a reply that it wouldn’t be possible to install it on the 2TB drive, so I would end up having to reinstall in any case.

When I complained on Twitter I was told “Sorry to hear this, you’ll receive a phone call before EOD to discuss your case.” I worked until 8pm that night with no phone call, so I just decided to return the thing.

Of course, this would be at my expense and the RMA instructions were strict about requiring shipping insurance: “System76 cannot refund your purchase if the machine arrives damaged. For this reason, it is urgent that you insure your package”. The total cost was well over $100.

So I’m out a chunk of change and I’ve lost faith in a vendor of which I was extremely fond. This is a shame since they are doing some cool things such as building computers in the United States, but since they’ve lost sight of what made them great in the first place I have doubts about their continued success.

In any case, I ordered a Dell Precision 5530, which is one of the models available with Ubuntu. Much smaller and not as powerful as the Serval WS, it is also not as expensive. I’ll post as review in a couple of weeks when I get it.

For several years now the OSMC has been extended by one day in the form of a “hackathon”. As I do not consider myself a developer I usually skip this day, but since I wanted to spend more time with Ronny Trommer and to explore the OpenNMS MQTT plugin, I decided to attend this year.

I’m glad I did, especially because the table where we sat was also home to Dave Kempe, and he brought Tim Tams from Australia: 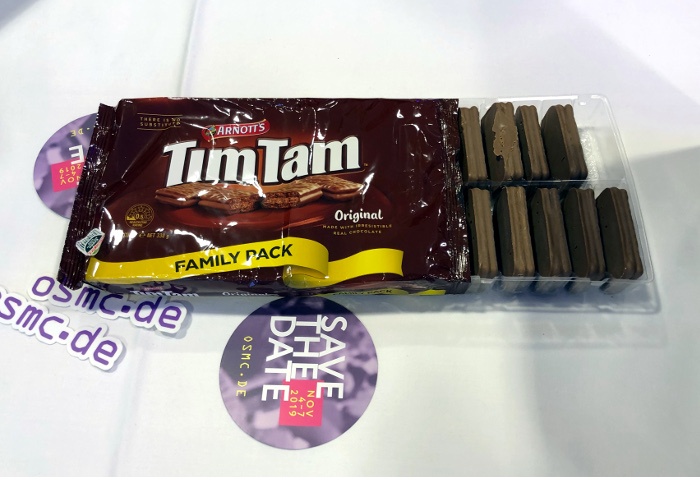 You can find them in the US on occasion, but they aren’t as good.

I have been hearing about MQTT for several years now. According to Wikipedia, MQTT (Message Queuing Telemetry Transport) is a messaging protocol designed for connections with remote locations where a “small code footprint” is required or the network bandwidth is limited, thus making it useful for IoT devices.

Dr. Craig Gallen has been working on a plugin to allow OpenNMS to consume MQTT messages, and I was eager to try it out. First, we needed a MQTT broker.

I found that the OpenHAB project supports an MQTT broker called Mosquitto, so we decided to go with that. This immediately created a discussion about the differences between OpenHAB and Home Assistant, the latter being a favorite of Dave. They looked comparable, but we decided to stick with OpenHAB because a) I already had an instance installed on a Raspberry Pi, and b) it is written in Java, which is probably why others prefer Home Assistant.

Ronny worked on getting the MQTT plugin installed while I created a dummy sensor in OpenHAB called “Gas”. 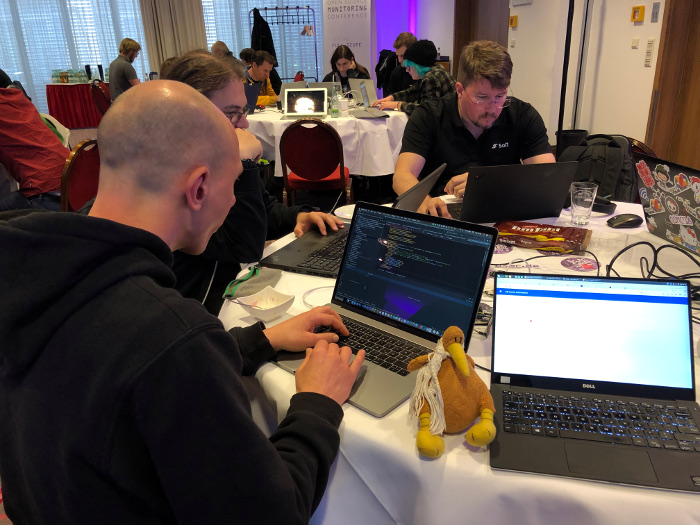 This involved creating a “sitemap” in /etc/openhab2:

and then an item that we could manipulate with MQTT:

To install the MQTT plugin:

Ronny added the following to the configuration to connect to our Mosquitto broker on OpenHAB:

Now that we had a connection between our OpenHAB Mosquitto broker and OpenNMS, we could try to send information. The MQTT plugin handles both event information and data collection. To test both we used the mosquitto_pub command on the CLI.

For an event one can use something like this:

On the OpenNMS side you need to configure the MQTT plugin to look for it:

Note how Ronny worked our Tim Tam obsession into the configuration.

To make this useful, you would want to configure an event definition for the event with the Unique Event Identifier (UEI) of uei.opennms.org/plugin/MqttReceiver/timtam/kitchen:

Once we had that working, the next step was to use the MQTT plugin to collect performance data from the messages. We used this script:

This will create a message including a random number every ten seconds.

To have OpenNMS look for it, the MQTT configuration is:

This will store the values in an RRD file which can then be graphed within OpenNMS or through Grafana with the Helm plugin.

It was pretty straightforward to get the OpenNMS MQTT plugin working. While I’ve focused mainly on what was accomplished, it was a lot of fun chatting with others at our table and in the room. As usual, Netways did a great job with organization and I think everyone had fun.

Plus, I got to be reminded of all the amazing stuff being done by the OpenNMS team, and how the view is great up here while standing on the shoulders of giants like Ronny and Craig.