I’m finally finding time to write a little, and I’ve had this post queued up for a some time. It has no OpenNMS specific content, so please skip this one if that’s why you read this blog.

After the conference, we left Frankfurt for Dresden, where we spent several days with some good friends. Many years ago, one of my friends hosted a foreign exchange student for a year. She was from Dresden, and we got to know her and her family. They treated us like royalty, and I enjoyed lots of dark beer as well as Eierschecke, a wonderful three-layer cake that is a specialty of Saxony.

From there we took a train to Prague. Prague is an extremely beautiful city, but I found it a bit crowded with tourists and the people I met a little cold (even when I struggled with my Czech – I studied Russian for a year and there are some similarities, but obviously not enough). I’m not judging the whole Czech people by this experience, I probably just didn’t make it to where the nice people lived and worked, but it wasn’t the experience I was expecting. 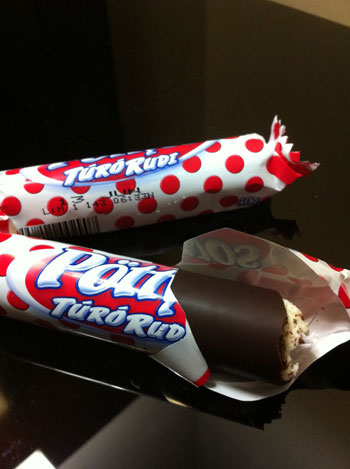 From Prague we went on to Budapest. My grandfather was born there, so perhaps that it why I found it so enjoyable. If you ever get the chance to go, stop by any convenience store and buy a bar of Túró Rudi. This is a chocolate and cheese confection that is simply wonderful, but alas it is not available outside of Hungary.

While in Budapest we visited the House of Terror museum. Despite its kitschy name, it is an amazing place: one part museum, one part art installation, and one part memorial. 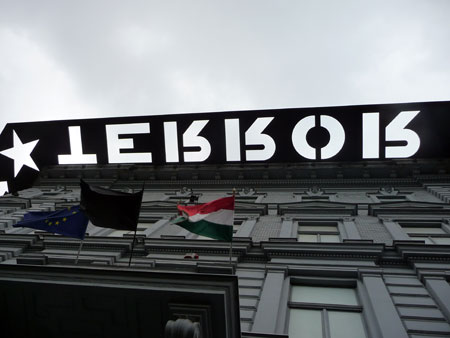 This building was home to the secret police under the Nazi occupation (part of the Arrow Cross Party) as well as the secret police under the Soviets. It has three levels, and chronicles the various methods the government used to control the populace. One room that stuck with me contained three tables representing a farmer, a member of the middle class and a member of the bourgeoisie.

The farmer’s table was plain with a single electric bulb above it. On the table was a dissident’s pamphlet that was very simple, with just a few words. The table of the middle class was nicer, with a better light fixture above it, and a more complex pamphlet. The wealthy table was very fine, with a chandelier above it and a tightly worded, nicely written pamphlet.

Members of all three classes were imprisoned, tortured and killed.

The basement housed the cells and execution rooms. One cell was so narrow that the person could only stand. Another was low so they had to crouch. Still another could be partially filled with water in which the prisoner was forced to stand for days.

One of the most profound parts of the exhibition was a video where women who were interned in a prison camp were brought face to face with the woman who watched over them. While the women had recounted many horrible experiences at the hand of this supervisor, she, to this day, believes she did nothing wrong. One of the issues still debated in Hungary is the fact that many of the Hungarians involved with the persecution of dissidents are still alive and have never answered for their actions.

The whole museum deeply affected me.

They display lists of the members of the secret police, judges in the show trials, and their supporters, and I was happy to see the name “Balogh” was absent from them. It was a little more sobering to see Laszlo Balogh as one of the victims who died there.

So, what does this have to do with open source software?

When I returned from my vacation and caught up on the news, there were two main stories that caught my attention. The first was the story of (ex) Representative Anthony Weiner, who was involved in a scandal involving explicit pictures and Twitter (Seriously? Weiner? You can’t make stuff like that up).

The second was the announcement by Apple of the creation of iCloud. While almost all of the reviews were positive, I found the whole idea extremely frightening. Putting all of your mail, contacts, documents, music, etc. into one central repository where you have no control over who has access to it chills me to the bone.

Throughout the House of Terror are little alcoves containing antique telephones. If you pick one up and dial, you’ll hear actual phone conversations recorded by the secret police, some of which were used to detain citizens. One exhibit featured the equipment used to record those conversations. When you see what could be done just by tapping phones, I can’t imagine the potential for misuse that a service like iCloud represents.

Yes, I am writing this on a Macbook. Yes, I own an iPhone. I haven’t switched to Android because I can’t find a way to sync my information without going through Google, which is just as bad. I doubt I’ll end up using any Apple technology that requires iCloud, but there is a good chance I won’t be able to get away from it.

I’ve always viewed the Internet as the great equalizer – a tool for democracy in its purest form. It is very frustrating to see that perverted; to see people freely give up their privacy to places like Facebook and Twitter. When I see people go through the TSA lines at the airport with nary an outcry at this abuse of the fourth amendment, I see a populace that has already been conditioned not to question authority in the name of convenience, and it is only going to get worse.

So what should we do about it? I think that the Open Source Way imposes a moral obligation to fight this. As more information moves from personal computers to handheld devices, it will be harder and harder to control it, especially since there doesn’t really exist a truly free handheld operating system.

We should keep pressure on Google to open up more and more of Android to outside control. I would love to see open source alternatives to iCloud – the technology is cool, especially if you can control or firmly trust the servers on which it runs.

And please, please someone point me to a project that will enable us to sync contacts and calendars from our desktops to an Android phone without involving Google.

Alexis de Tocqueville is credited with saying “In every democracy, the people get the government they deserve.” I think we deserve the best, and it is up to us to create it.