This post is about a week overdue, but for the first time in my life I came down with a vicious case of “con crud”. This is a illness that you can get after attending a conference or convention (no reference since the top hits on Google all reference “furries“). This really knocked me out – mainly sinus congestion so severe that my head hurt so bad I couldn’t really sleep. It just laughed at my attempt to treat it with pseudophedrine, and nothing but time seemed to help. Luckily I feel better now and I’m eager to talk about my great time in Brussels at my first FOSDEM.

The Free Open Source Developers European Meeting is probably the largest free software event in the world. This year an expected 8000 people descended on the Université Libre de Bruxelles, and I believe every one of them walked by our stand. It was insane.

I arrived from Riga Friday night and made it to my hotel. My so-called friends had already abandoned me and headed toward the Grand Place and Cafe Delirium, the de facto pre-conference bar. 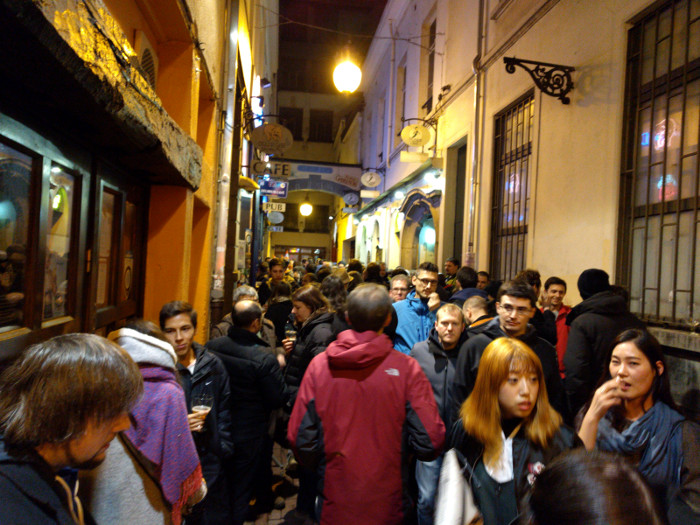 Against all odds I managed to catch up with them in the alley outside the bar. Ronny and Markus had come over from Germany, as did Simon and Anya. Jonathan and Craig had come from the UK, and I finally got to meet the amazing Cyrille, a long time OpenNMS contributor who lives in Brussels. There was beer. 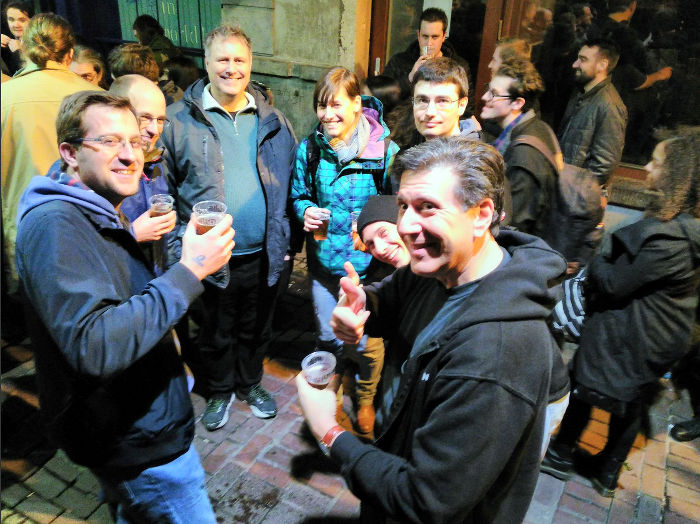 We headed over to the university early on Saturday to set up our booth. While this was my first FOSDEM, I was told by a couple of long time attendees that the conference outgrew the venue years ago, with various suggestions for why: from “tradition” to “it’s free”. In any case, it does create an atmosphere that can only be described as special. 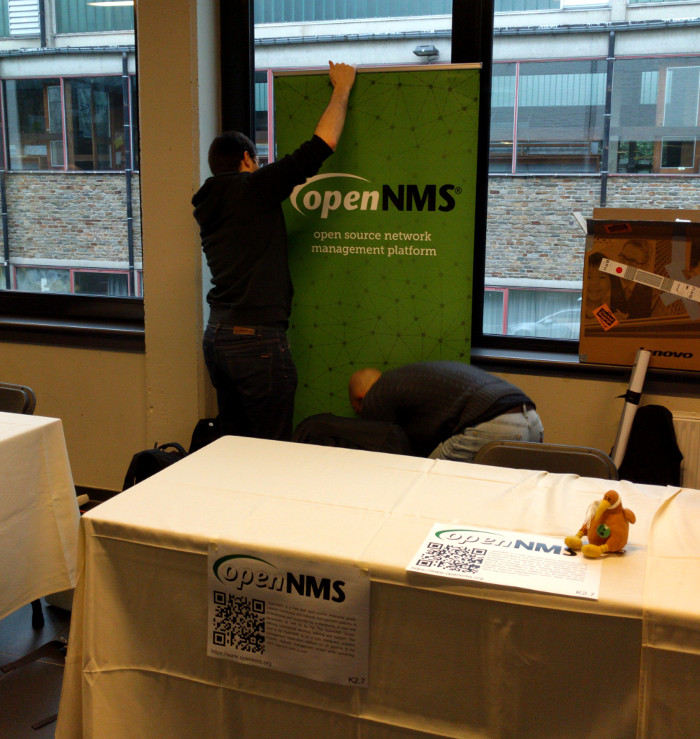 We had a stand in Building K on the second level. This was in a wide hallway surrounding a large auditorium where a number of sessions were held. From the start we got a lot of traffic to the stand, and unlike many conferences the people that stopped seemed genuinely interested in learning about OpenNMS and weren’t just there to check out the swag.

And we had really good swag. In addition to a number of stickers (including the awesome “Ulf Mate” sticker as a play on the “Club Mate” logo and slogan), we had, new for this show, OpenNMS keychain/bottle openers which were a big hit. 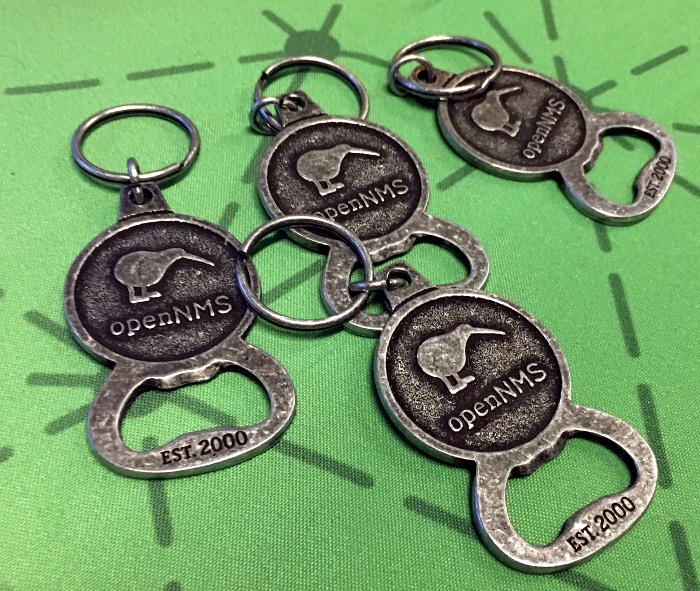 I also got interviewed for Hacker Public Radio. I don’t remember much of what I said, but people seemed to be into it (grin).

It is seriously difficult for me to describe the crowds. When I needed the restroom, I had to make my way downstairs and then fight my way through a crowd so packed I think it rivaled that year I went to Mardi Gras in New Orleans. 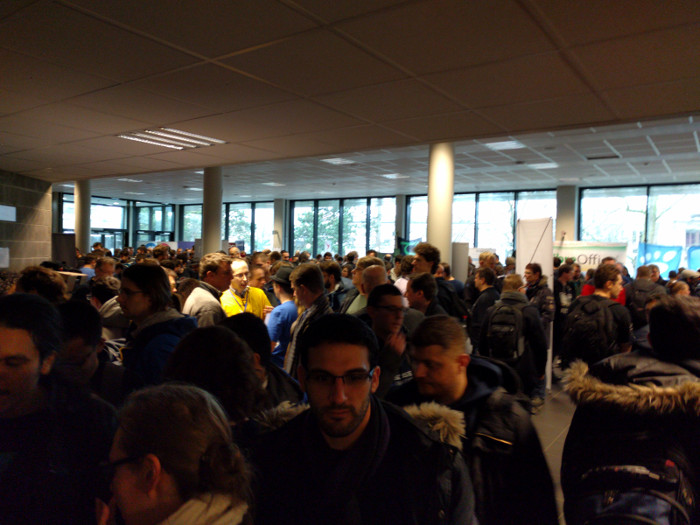 But it just lent to the energy and atmosphere of the place. I know from social media that a number of people I know were there that I just missed (looking at you Brian Proffitt) but I did get to see some old friends and I make a few new ones. One person I was happy to meet for the first time was Carol Chen. She is the community manager for ManageIQ, and I first learned about her when Jeff was invited to do an OpenNMS talk at the ManageIQ Design Summit. 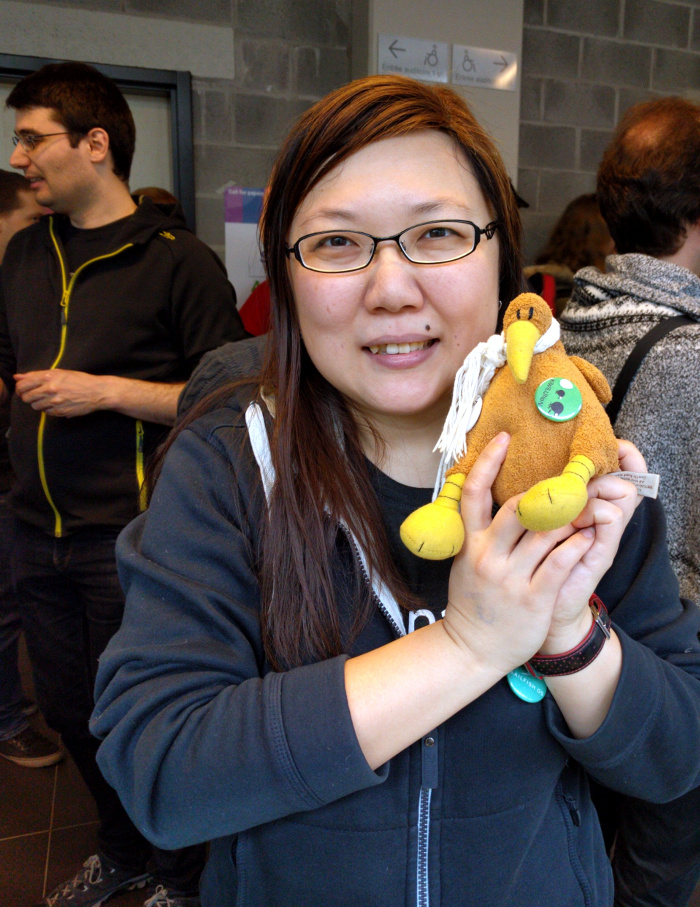 She showed up at the stand on Sunday in search of one of our keychains, but we had run out. I had put one away for me but was happy to give it to her. After all, I can always get more.

One thing that sets FOSDEM apart from other open source conferences is the emphasis on “free” software, and some of the social justice causes that naturally follow. Heck, the University has “free” (as in freedom) in its name. Considering that the US President had signed a “Muslim Ban” the week before the conference, it was cool to see this sign on campus. 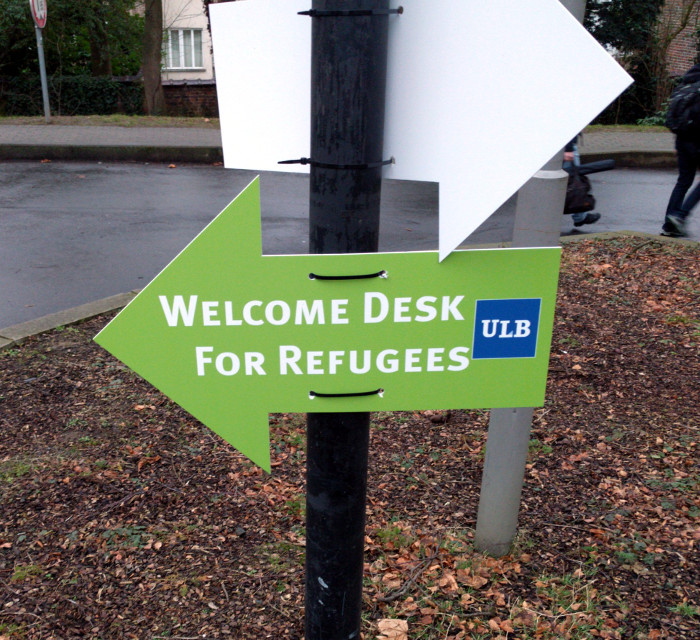 But not all of the fun happened at ULB. Brussels has some beautiful architecture, and just wandering around you might come across a stunning building like this church. 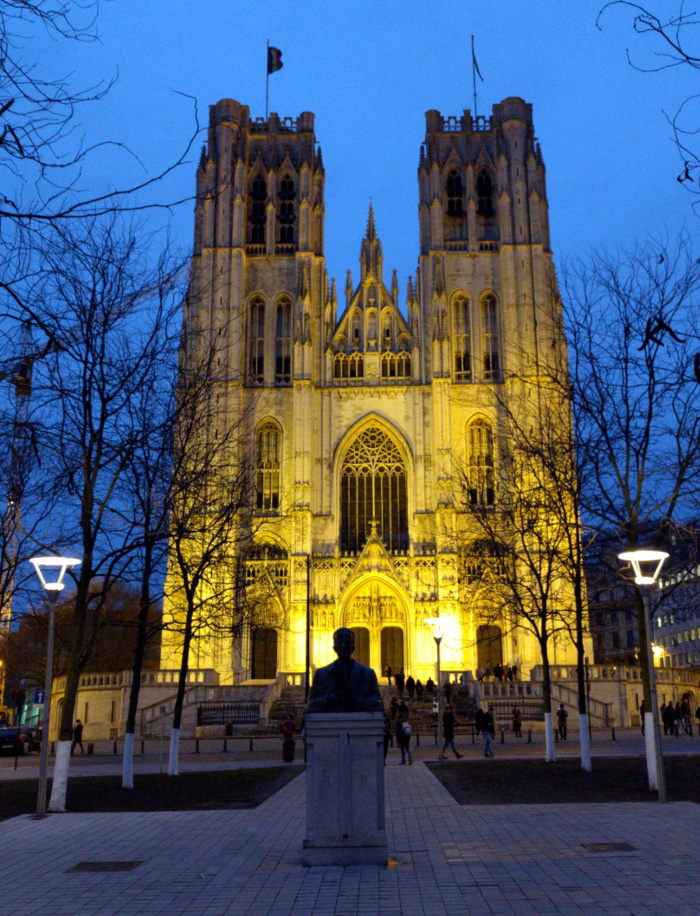 Nothing is probably as striking as the Grand Place, or central square of Brussels. It is surrounded by tall buildings, some of which represent Guildhalls of various crafts. My friend Daniel pointed out to me that a lot of the money for those buildings probably came from Antwerp during the height of the Hanseatic League. Since the cities of Tallinn and Riga were key players in the Hansa, it kind of brought this European trip full circle. 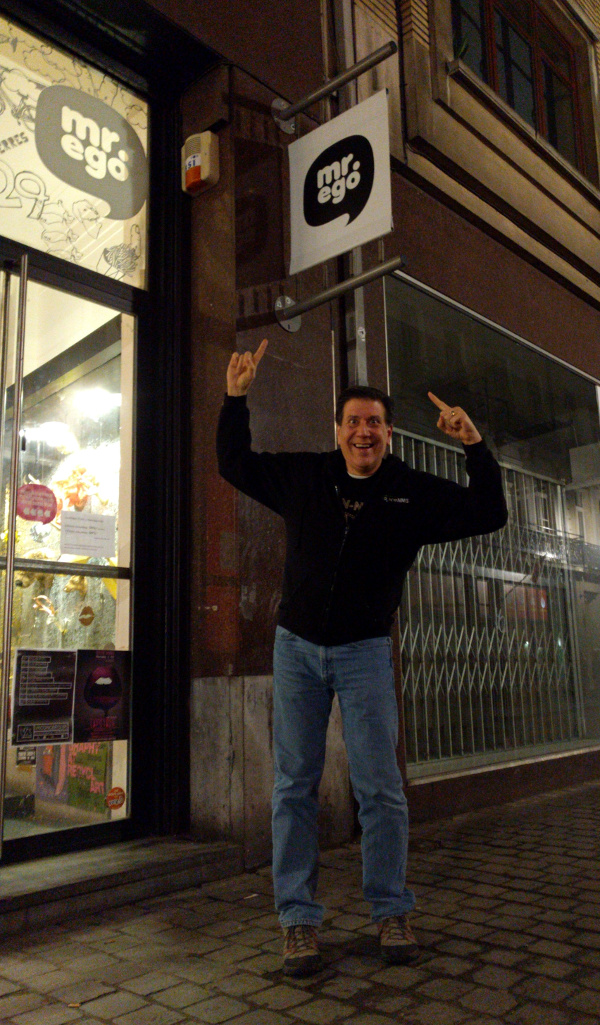 We ended the conference on Sunday with a small group of us meeting for beers and then dinner. Dinner was held at Restaurant Vincent and it was quite good. 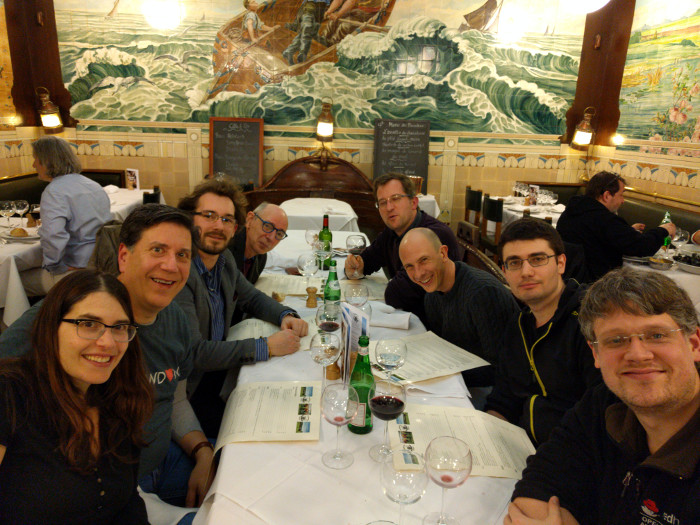 At the table is Karen Sandler from the Software Freedom Conservancy, me, Lukas and Daniel Ranc from Paris (Daniel teaches at Télécom SudParis and his son is working on his Ph.D.), Cyrille Bollu, Ronny Trommer and Markus von Rüden from OpenNMS, and Spot Calloway from Red Hat.

My only wish is that we could have sat at a round table, since the long table caused conversation to be split into two. I really wanted Daniel and Spot to chat, as Daniel is working on some cool software for education for doing quizzes and surveys in class, and Spot is focused on higher education at Red Hat. But in any case I really enjoyed the conversation, especially one story that Spot told of his college days that I pretty much can’t top (and I pride myself on being able to hold my own when it comes to storytelling).

It was a nice end to an exciting week.