Today Network World published the results of a comparison among open source network monitoring applications. OpenNMS did not win but I was pretty happy with the article.

The main criticism I have is that the winner, Pandora FMS, seems to be the only one of the four reviewed that is more “open core” than “open source”. They have a large number of versions, each with different features, and you have to pay for those features based on the number of monitored devices. It seems to be difficult to have open source software that is limited in this fashion, as anyone should be able to easily remove that limit. Thus I have to assume that their revenue model is firmly based on selling software licenses, which is antithetical to open source. That said, it looks like the review was based on the “community” version of Pandora which does appear to be free software, just don’t expect any of the “enterprise” features to be available in that version any time soon.

I don’t know why I have such a visceral dislike of the “per managed node” pricing model, outside of having to deal with it back in the 1990s and 2000s. It seems like an unnecessary tax on your growth, “hey, customer, for every new device you add you have to pay for another monitoring license.” Plus, in these days of virtualization and microservices it seems silly. Our customers might spin up between 10 and 100 virtual servers as needed and tear them down just as quickly, and I can’t imagine the complexity that would get added to have to manage a license of each one of them. 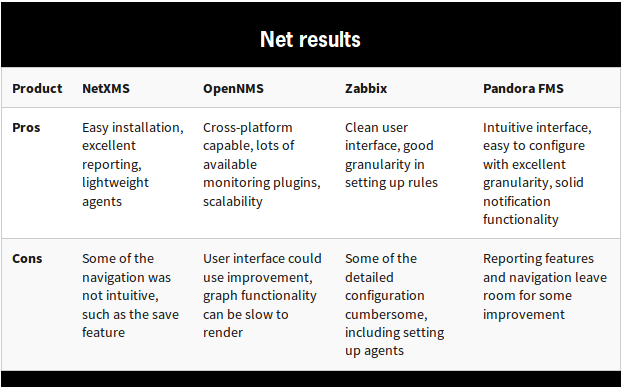 Of the other applications reviewed, I’m not familiar with NetXMS but I do know Zabbix. They, like OpenNMS, are 100% open source and they are great people. It was awesome to finally meet Alexei Vladishev in person at this year’s All Things Open conference. 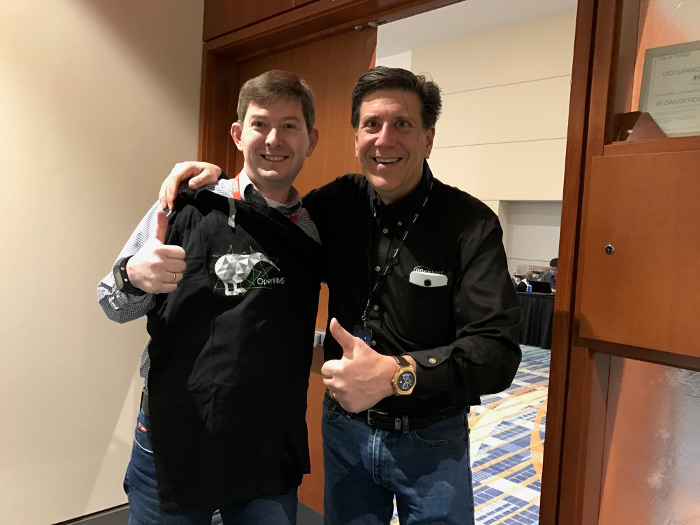 The only other thing that immediately pushed a button was the sentence “All four products were surprisingly good.” At first I took it to express surprise that free software could also be good, but then I calmed down a bit and figured they meant it was surprising that all four applications were strong.

For the article they installed OpenNMS on Windows. When I read that my heart just sank, because while it does run on Windows our support of that operating system grew out of a bet. We were talking many years ago about Java’s “write once, run anywhere” slogan and I mentioned that if that were true, why don’t we run on Windows? The team took up the challenge and it took two weeks to port. The first week was spent getting the few bits of code written in C to compile on Windows, and the second week on soft-coding the file separator character so that it would use a back-slash instead of a forward-slash. Even on Windows, the comments in the article were really positive, which make me think this whole Java thing isn’t such a bad idea after all (grin).

They used Windows because apparently was an issue with getting OpenNMS installed on CentOS 7, which was a surprise to me, but then Ronny pointed out that there can be some weird conflicts with Java and packages like LibreOffice that I don’t experience since I always do a minimal install. There is a cool installer for CentOS 7 which may help with that. We also maintain Docker images that make installation easy if you are used to that environment.

Fortunately, or unfortunately, not much has been done for OpenNMS on Windows since we got it working. It is fortunate because not much is required to keep OpenNMS running on Windows due to Java, but it is unfortunate because we really don’t have the Windows expertise that would be required to get it to run as a service, create an MSI installer, etc. Susan Perschke, the author of the article, seems to be a Windows-guru so I plan to reach out to her about improving the OpenNMS experience for Windows users.

One thing that is both common and valid is criticism of the web user interface. At the moment we spend most of our time focused on making OpenNMS even more scalable, and thus we don’t have the resources to make the user interface easier to use. That is changing, and most of the current effort goes into Compass™, the OpenNMS mobile app. The article didn’t mention it which means they probably didn’t try it out, which is more a failure on our part to market it versus an oversight on theirs.

They also didn’t talk directly about scalability, although it was listed in the comparison chart (see above). OpenNMS is designed to monitor tens of thousands to hundreds of thousands of devices with our goal to be virtually unlimited in order to address scale on the order of the Internet of Things. That is why we wrote Newts for storing performance data and are working on both the Minion and Underling to easily distribute OpenNMS functionality.

Another reason we haven’t spent much time on the user interface is that our larger customers tend not to use it much. They rely on the ReST interface to integrate their own systems with OpenNMS and on things like the Business Service Monitoring.

But still, it was nice to be included. We don’t do much direct marketing and even though typing “open source network monitoring” into Google returns OpenNMS as the first hit we are often overlooked. Let’s hope they revisit this in a year and we can impress them even more.