I made the decision to stop going to conferences for 2016, but I made an exception for All Things Open (ATO). Not only is it an amazing show, it’s also in my back yard, and the combination is not something I can pass up.

I love conferences. My favorite track is always the “hallway” track and I really enjoy spending time with people that I tend only to see these events. The problem is that I started to do the math.

In 2015, due to work travel, I was gone part or all of 26 weekends (I travel about 50% of the time, and often that means I head out on Sunday and back on Saturday). That leaves 26 weekends free. Of those, at least 10 are taken up with vacations, holidays, birthdays and other social engagements, leaving me just 16 or so weekends to myself. If I do 5 to 10 conferences, most of which are held over a weekend, I’m left with less than a weekend a month.

Plus, OpenNMS is going like gang-busters, so I really need to focus on that business. While I love open source conferences, we don’t get many customers out of them (one exception is the Ohio Linuxfest which seems to attract a large number of OpenNMS users) so it can be hard to justify the time (although they are a whole lot of fun).

Anyway, since ATO was the main show I was going to be involved with this year, we decided to host a party that first night. I also submitted some papers, and to my surprise two of them were accepted.

I headed out on Tuesday afternoon, as the wonderful team at opensource.com was hosting a gathering for contributors that night. That was a lot of fun and a number of us ended up at Foundation afterward. As a cocktail enthusiast I had always wanted to visit, but it is about an hour from my house I don’t want to drink and drive. Since I was staying downtown for the event, that issue went away and I had a great time.

The conference was held in the Raleigh Convention Center, and you could see the registration desk from my hotel room. 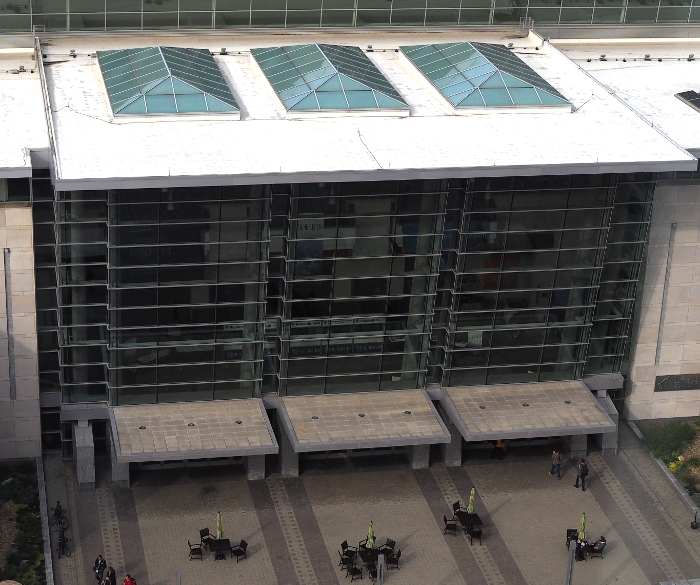 Wednesday was start of the conference. ATO is organized by Todd Lewis, the nicest guy in open source, and he kicked off the keynotes. 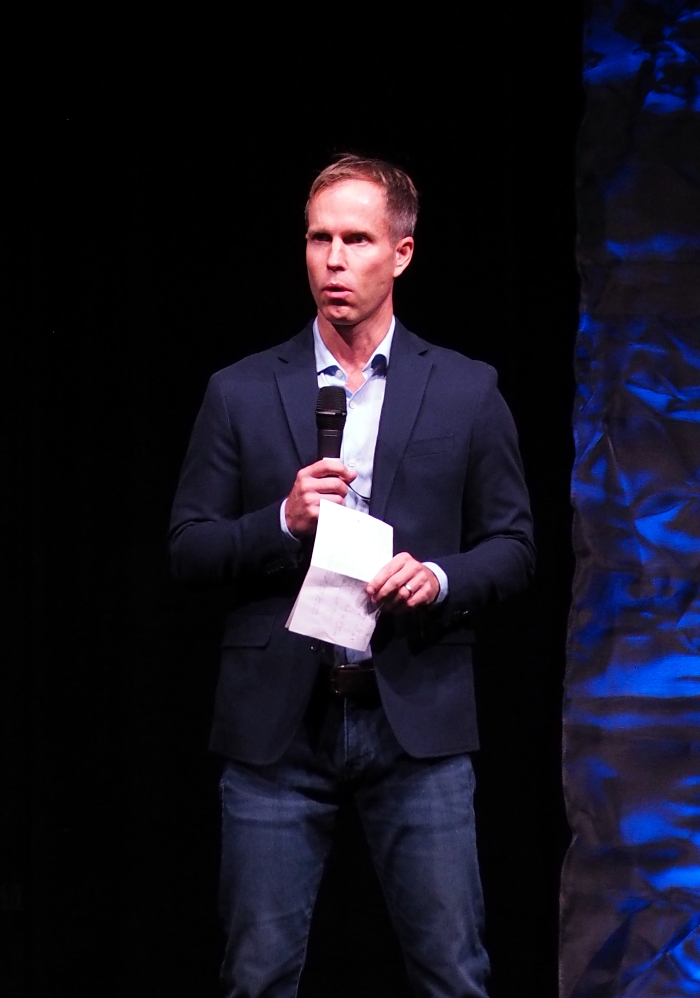 Todd’s superpower is organization, and not only did the conference run smoothly, he got some great speakers. Jim Whitehurst, the CEO of Red Hat, did a talk on the social benefits of open source. 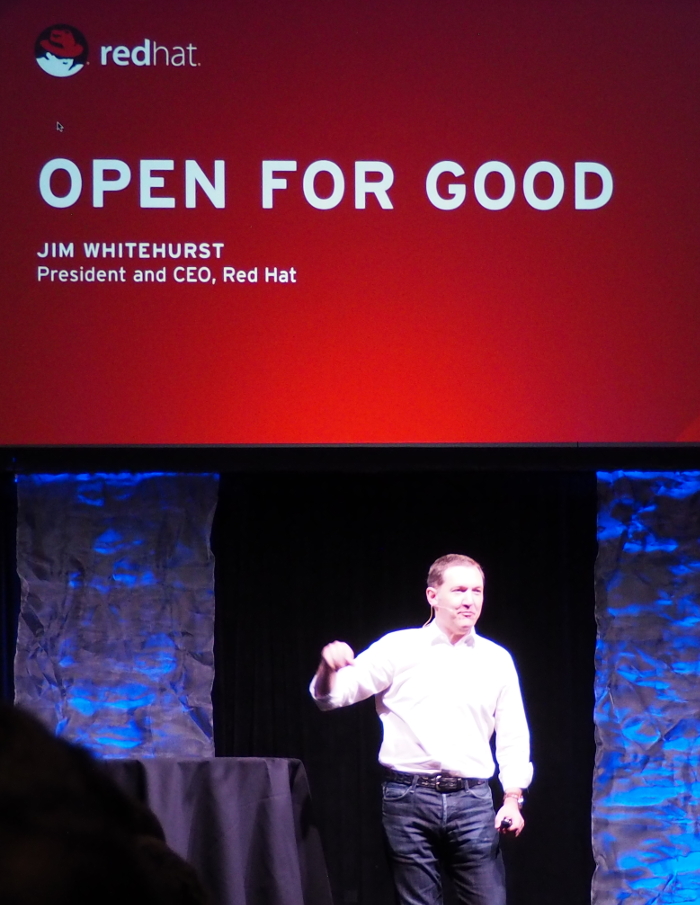 We also got a talk from Mark Hinkle, the VP of Marketing of the Linux Foundation. He was recruited at the last minute due to a cancellation, and I thought he did a good job especially considering his time to prepare (unlike normal, I actually had my presentations done at least a week before the conference). 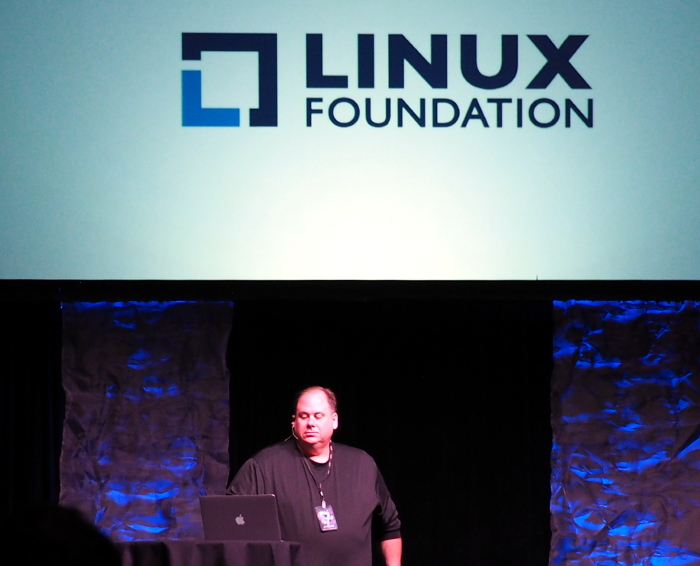 He started off with some “separated at birth” pictures between punk rockers and open source personalities, which reminded me of something that hit me when it was announced that the DB Cooper investigation was being closed. 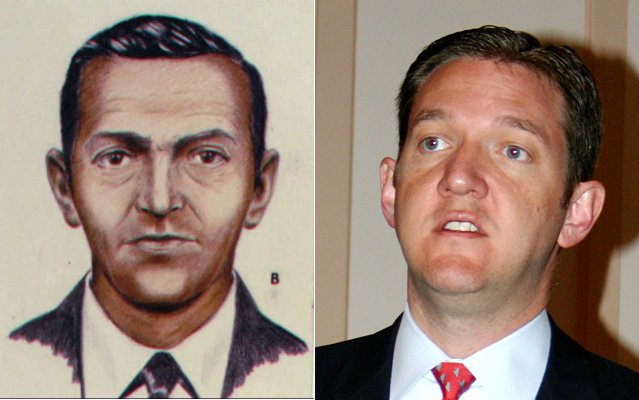 I think Jim was about four years old when DB Cooper hijacked that plane, but the similarity is striking.

Another keynote speaker was Jono Bacon. 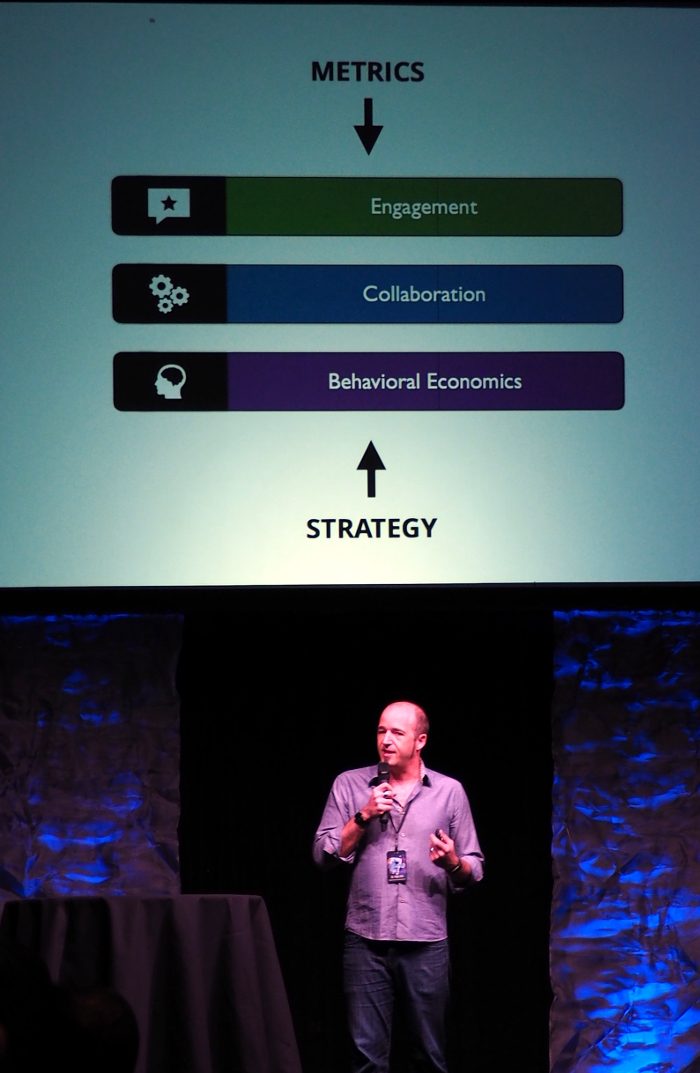 Always (well, usually) interesting, I love how he has been working the relatively new field of behavioral economics into his talks of late. It is the study of how human psychology can impact economic decision-making and I think it has a lot of relevance in a field where businesses often tout the word “free”. By understanding how we behave we can better align our communities to meet the needs and desires of their participants.

After the keynotes were the individual sessions. I had two back-to back. 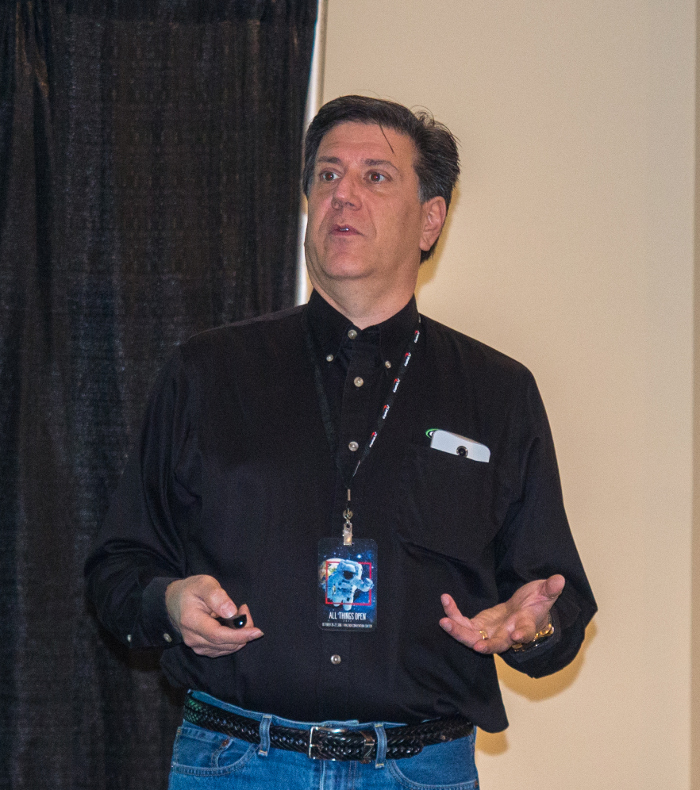 Thanks to Ben for the picture, which captures me in my full “Fred Flintstone” glory. Click on the pic below if you want to see the slides, and I did a interview for DZone on my talks. I did embed some video which won’t show up on the PDF, though.

My first talk was on the challenges facing us with the Internet of Things, especially when it comes to monitoring. 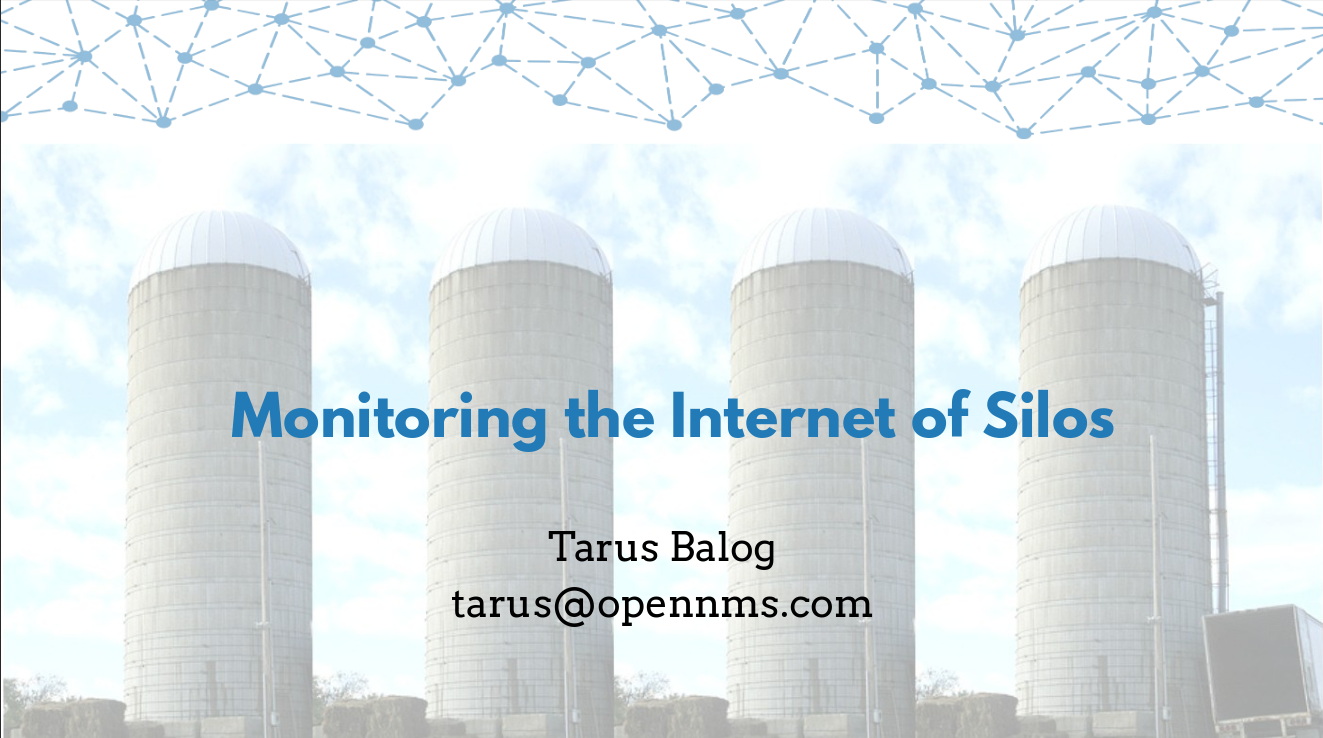 It was lightly attended but everyone who came seemed to get a lot out of it.

Right after that I did a new, updated version of my open source business talk. 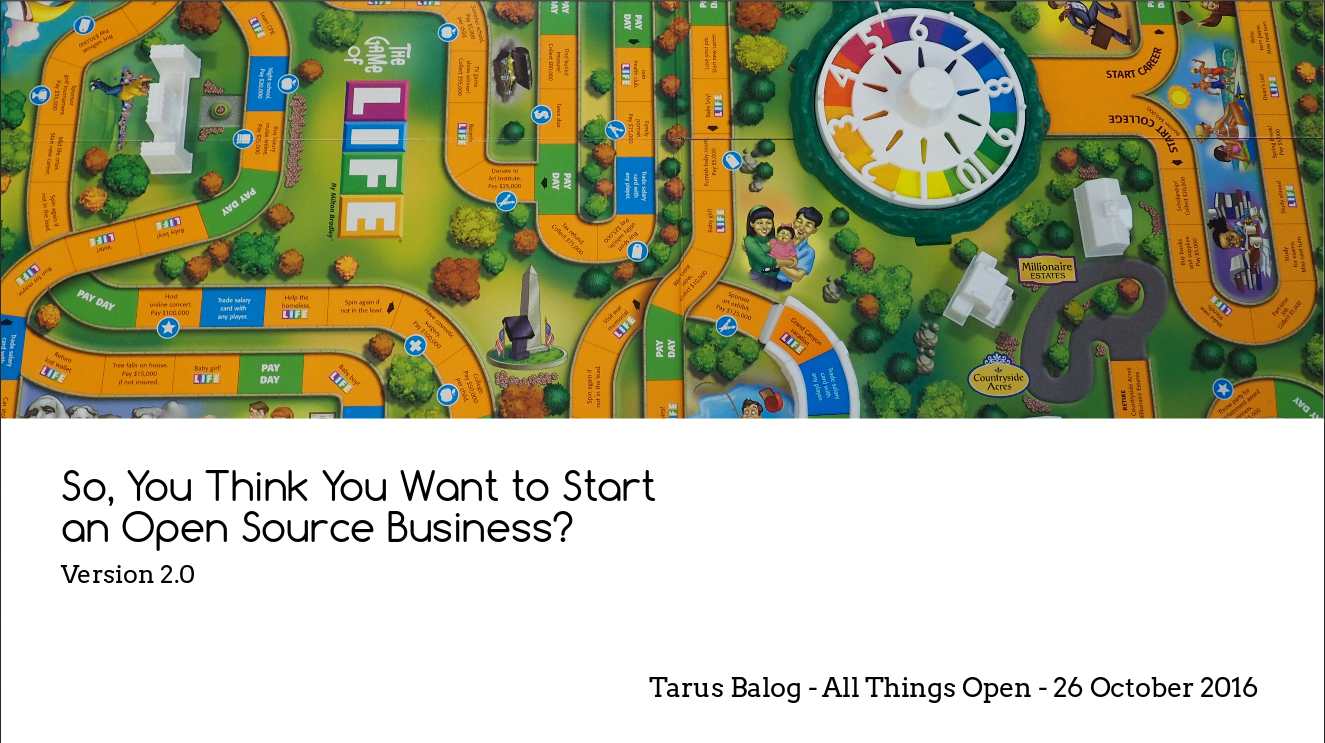 That one was standing room only, and I was really pleased with the feedback. One guy was telling me that he has seen a number of presentations about running an open source business but mine was the only one with concrete examples. I’m glad folks liked it.

Once my talks were done it was time for lunch and I was pretty much done with my obligations. The main one left was to help prepare for the OpenNMS Group sponsored concert at King’s Raleigh. We had hired MC Frontalot and his band to play a show in Portland, Oregon for OSCON, and the Doubleclicks opened. It was so much fun we decided it would be cool to bring it closer to home. 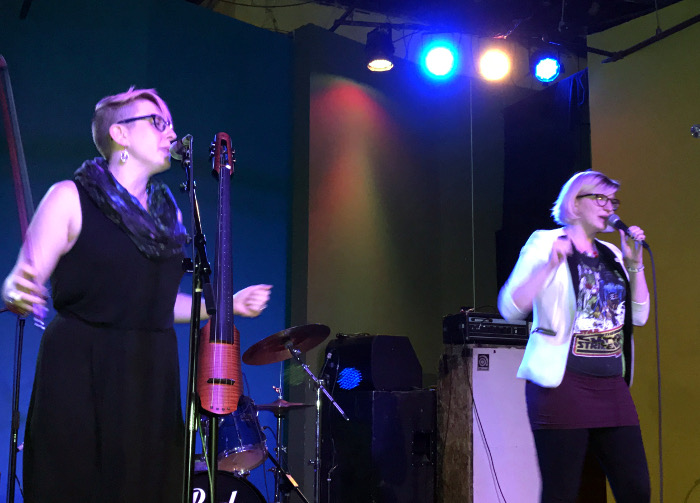 If you haven’t heard of the Doubleclicks you should check out their music. Even if you have, you might want to familiarize yourself with their catalog, especially if, like I did, you think it would be funny to shout out “Freebird!” in the middle of their show (ouch).

The MC Frontalot set was really tight as well. I love working for professionals. We when got there and there was no keyboard and half the drum kit was missing, I was a mess. They calmly got it all sorted and then really kicked it during the show. They premiered “Freedom Feud” – a song we commissioned about free software. Front is still working on the final master and we have a video in production, so look for it to be posted soon, and thanks to Ben for the concert pics.

Even though I didn’t get to bed until about 04:30 (we eventually ended up in the hotel listening to some tracks Front is writing for the next album that’s all about the Internets) I was back up at 08:00 for Day Two of ATO. With my responsibilities out of the way it was nice to listen to the talks and visit with all the cool people in attendance.

Many thanks to everyone who came to my talks, to Todd and Company for a great show, and to OpenNMS for hosting a party for all my friends. See you next year.