Even though OpenNMS has been around for over 15 years now, a lot of people, including open source people, don’t know we exist. In an attempt to fix that, we’ve been experimenting with various marketing efforts, and in keeping with our mission statement of “Help Customers – Have Fun – Make Money” we also want them to be fun.

I have a love/hate relationship with the O’Reilly Open Source Conference (OSCON) but I can be assured that many of my friends who are into free and open source software will be there. This year I thought it would be fun to host a concert featuring MC Frontalot. Not only is his music awesome, it should appeal to many of the attendees. We lined up a venue (the amazing Dante’s) and an opening act, The Doubleclicks.

My one fear was that no one would show up, so I was relieved when I rushed from a previous meeting to Dante’s to find the place full, and by the time the show started it was packed.

Prior to setting this up, I had not heard of The Doubleclicks. Angela and Aubrey Webber are sisters who sing about geek things. Prior to the show I listened to a lot of their music, and since I was paying for this gig they even did one of my favorites, “This Fantasy World (Dungeons and Dragons)“. When they sang the lyric “and their primarily Windows-based computers” it got a big laugh. 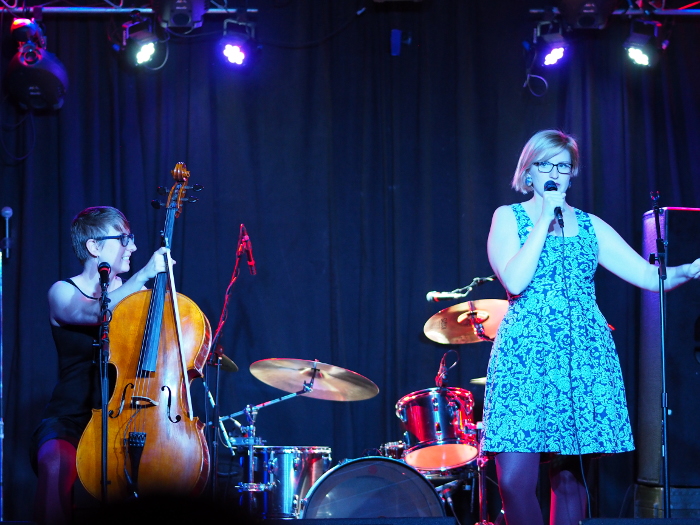 One thing we struggle with in the tech world in general and open source communities in particular is how to encourage more women to get involved. As a male dominated industry, women can face particular challenges. When The Doubleclicks sang “Nothing to Prove” I realized I couldn’t have asked for a better set list if I’d tried:

We read books, we played games, we made art, we watched Lost
We said things like “D20”, “shipping” and “Mana cost”
It felt good to be myself, not being mocked
Still self-conscious, though, we whispered things about jocks

But one day, you grow up, come into your own
Now geek’s not rejection – it’s a label I own
Then ignorant haters come to prove me wrong
Tell me I’m not nerdy enough to belong

This rang particularly true due to OSCON being hit with a “gamergate“-like attack for having Randi Harper speak. Considering the number of women at the show, I think we succeeded in promoting an all-inclusive environment.

After their great set, MC Frontalot and the band prepared to take the stage. This was the fourth Frontalot show I’d organized but the first with the band. The reason I hadn’t hired the whole band before was simple: it’s more expensive. Plus, from the videos I’d seen on the Intertoobz, I didn’t think they added all that much.

I was so wrong.

It’s hard to capture on video the energy these four gentlemen bring to the stage. The man driving the beat on drums is The Sturgenius (aka Sturgis Cunningham). Blak Lotus (aka Brandon Patton) is the whirling dervish on bass. I sat an watched him spin from stage left, often winding the cord to his bass around his legs and then unwinding it just in time to avoid tripping. Vic-20 (aka Ken Flagg) played wireless keytar, and while everyone was mic’d, turns out he has the voice of an angel and did the most duty on backup vocals. 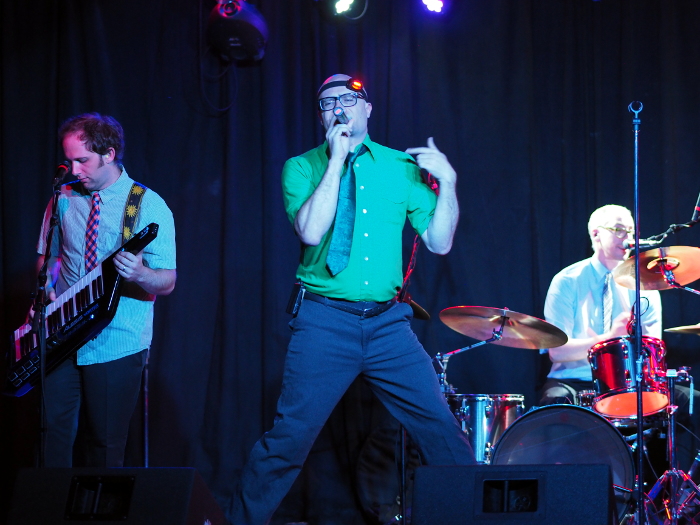 They played all of my favorites, such as “Critical Hit” and “Stoop Sale“, and while Front has always given 110% at my shows, being with the band brought out something more.

When I walked around OSCON inviting people to the show, a lot of people were psyched but I still got that weird “Nerdcore Hip Hop?” look from many. I don’t think that anyone who has seen them live could mistake them for anything other than truly original musical artists.

OCSON is moving to May and to Austin, Texas, next year, and my hope is to bring the band out again. And I do actually plan to write up my thoughts on OSCON itself, but as I got almost no sleep in the last week that will have to wait. The fourteen and a half hours I slept last night seemed to have helped a lot, though.