In 1990, when the Internet was much smaller and slower than it is today, a bunch of forward-thinking people realized that this new technological wonder would create some unique issues for our society, and they formed the Electronic Frontier Foundation to protect people from its negative effects.

I can’t remember the first time I got involved with the EFF, but for years I’ve followed their efforts and cheered them on. Before I wore it to shreads, my “Protect Bloggers Rights” T-shirt was one of my favorites, and I still carry my passport in an EFF-badged wallet that blocks RFID transmission.

Earlier this year, the animator Chad Essley auctioned off the chance to be added to his video for the MC Frontalot song “Shudders” with all proceeds going to the EFF. The result was that the OpenNMS mascot Ulf gets a few seconds of much deserved fame and I got an invitation to the EFF’s 25th anniversary party.

I wasn’t going to make it (I don’t live in the Bay Area) but when I decided to attend this week’s Community Leadership Summit followed by OSCON up in Portland, it turned out that it wasn’t much more expensive to fly here first before heading up to Oregon. I know several people in the area and I figured I could find something to do before the party, but then the EFF created a half-day “minicon” so I decided to attend that as well. 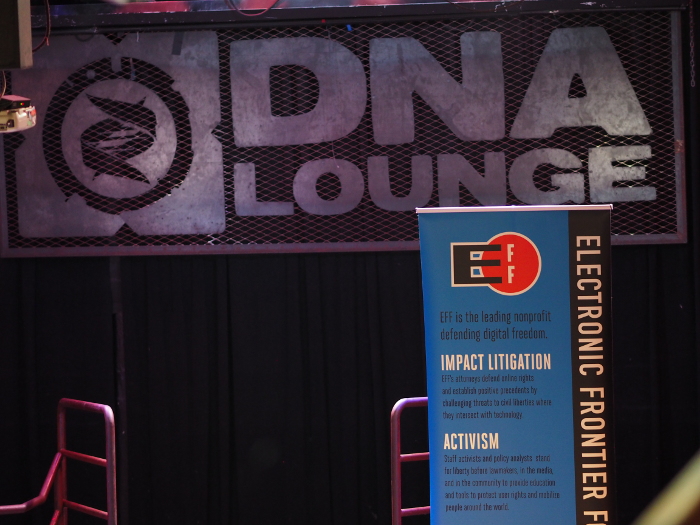 The minicon consisted of three panel discussions. It was held at a nightclub called the DNA Lounge and when I got there just before noon the line to get in was already stretching down the block. When I did get in, there was a stage set up for the panels (a moderator’s podium and a table with four chairs for the panelists) as well as two banners describing what the EFF does. 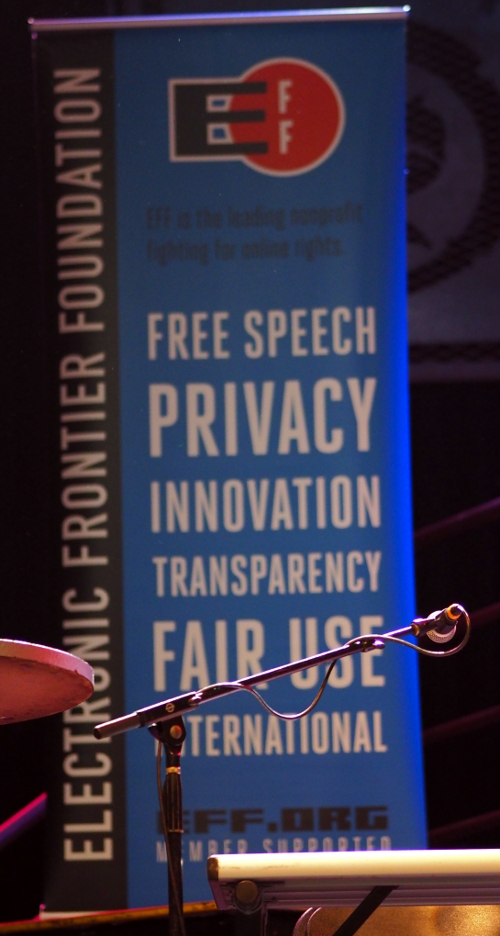 I thought the left one was pretty succinct: Free Speech, Privacy, Innovation, Transparency, Fair Use, International. Yup, that about covers it.

I didn’t take any pictures of the attendees (this group does attract a contingent from the “black helicopters” crowd) so while I probably had the right to take pictures as part of a public gathering it would have been rude. It was nice to see a fairly even split between men and women, and for once I wasn’t the oldest person in the room. It was mainly Caucasian and Asian faces that I saw (hey, that’s pretty much Silicon Valley) and I did see people with colorful hair (bright pink, electric blue, etc.) That part was similar to the open source conferences I attend, but there wasn’t a single utilikilt. The vibe was also different. Whereas FOSS conferences also attract technical people with a strong libertarian bent, this crowd included a lot more people concerned with social activism.

Which brings us to the first panel: Activism. 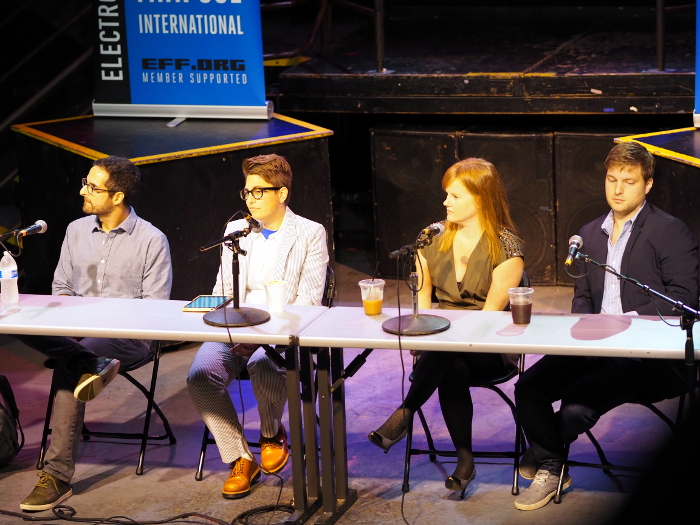 Not only does the EFF identify threats to liberty brought on by new technology, one of their pillars is to mobilize people to effect change, so this panel discussed ways to more effectively do just that. Should you call your Congressional Representative or e-mail them? Is publicly tweeting about them better than a private correspondence? One panelist commented on the fact that you can’t A/B test reality so it can be hard to determine the best action. Plus, if a particular effort is successful, such as with SOPA, the bar is set high for the next one, which can cause its own problems.

It was the first time I had been introduced to Annalee Newitz, and I really liked her comments. Yet another person to follow on the Twitters.

They also announced a project by Sina Khanifar called democracy.io which is supposed to make it easier for people to contact those in government.

The second panel focused on Copyright. 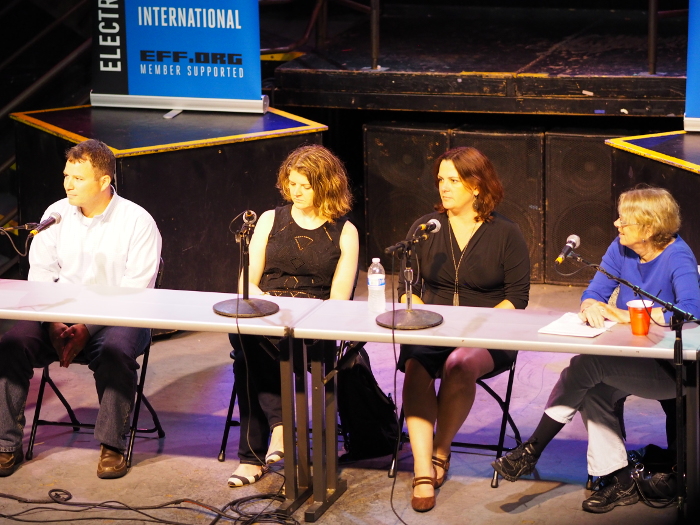 I am not an anti-copyright person. Copyright law is what makes free and open source software possible. However, it is obvious that it is broken. As a process created to mainly protect things like the written word, it doesn’t lend itself well to computer code. Plus, some copyright holders have a track record of abuse. I’ve even experienced it in such things as bogus DMCA takedown notices.

Part of this discussion focused on the concept of “fair use”. If I am given something or I pay for something, does the person from whom I got that something have a right to set limits on what I can do with it? It’s a tricky question. If I use someone’s song in a television commercial, it seems obvious that I should have to pay the owner of that song, especially since it may imply that the creator of the music endorses my product or service. But what if I invite 30 people over for a party and put on some music? Does that count as a “public performance”? It’s tricky.

The EFF is very concerned with transparency, and quite naturally has issues with secret negotiations such as the Trans-Pacific Partnership agreement (TPP). Proponents of keeping trade negotiations secret will claim that they don’t want the discussion to disrupt markets. For example, if the discussion was about whether or not to place tariffs on corn exports, whether or not they would actually come about, this could cause undue fluctuations in the market for corn.

As one of the panelists noted: Copyright is not corn.

The TPP has a focus on intellectual property rights which will have far reaching repercussions for users of technology. Without oversight, the government’s zeal to protect, say, the movie and music industry, may result in actions that are detrimental to end users. People in government don’t tend to have strong technical experience, so it is important that these discussion take place in the open. 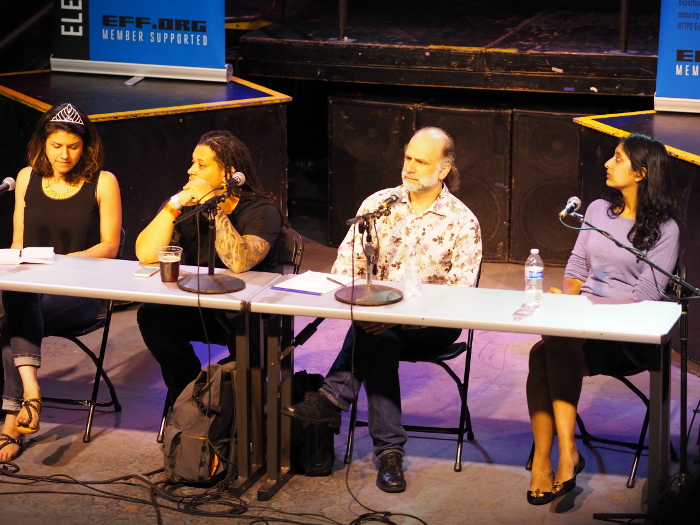 This panel included Bruce Schneier. This was the first time I had seen him speak, and I was not disappointed. One of the questions was to predict privacy challenges due to technology 25 years from now. Bruce pointed out that it was harder to predict the impact of new tech on society than the tech itself. For example, we now have flying robots that kill people. On the one hand this is very frightening, and on the other hand, in a way, it is really, really cool.

He was referring to drones of course, and I couldn’t help but think of the trauma some drone operators are now facing even though they are thousands of miles from actual combat. Tech has also created an “interrupt driven” culture that may be fostering short attention spans. Heck, I’ll be surprised if even one of my three blog readers makes it this far in this long post, and we’ve had to come up with tags like “TL;DR” to deal with things like this. I can’t imagine what changes this will bring about in 25 years.

I was also impressed by panelist Parisa Tabriz. She is the “Security Princess” at Google and a solid public speaker. She pointed out that at Google they sometimes struggle with security versus privacy, in that certain security tech can leave a fingerprint that might weaken anonymity.

It is hard to talk about Google without bringing up Apple, and it was pointed out that Apple fails miserably on the transparency front but does do a good job when it comes to privacy. The argument goes that since Apple makes money on hardware (compared to Google’s model) they have less motivation to look at their users’ data. It would have been nice to have someone from Apple on the panel, but I’m not sure if they were asked. I did ask the EFF via a tweet, but didn’t get a response.

While most panel discussions suck, I enjoyed these, and I’m glad I went. The minicon ended around 4pm and since the party didn’t start until 8pm I decided to head back to the hotel, work on some e-mail and take a nap.

That was a mistake.

When my alarm went off at 7pm, I was so tired I considered blowing off the party entirely. I decided to go because Maggie had managed to find another RFID blocking passport wallet, as my EFF-branded one is pretty tattered, and I need another. It doesn’t have the EFF logo on it, but I hope they make more in the future. 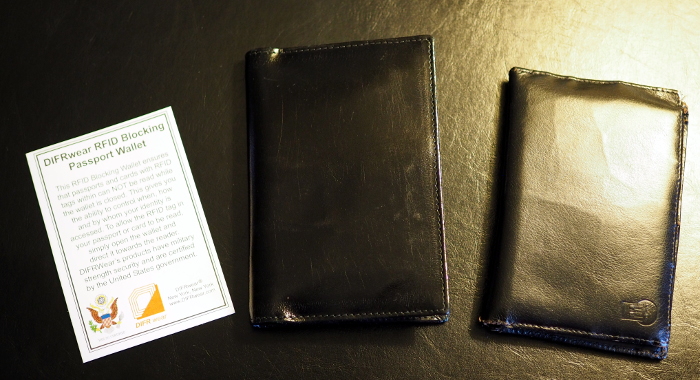 My passport has had RFID technology embedded in it for years, but in all my travels it has never been legitimately accessed. It is just another example of technology being chosen because it exists without a firm plan on how to use it. I like knowing that I now can chose when to enable it or not (and yes, I know I could nuke it in the microwave but I’m not ready to go that far, yet).

Another thing I wish the EFF would do is advertise more about Amazon Smile. If you shop on Amazon Smile you can choose to have a portion of your purchase benefit a specific organization. It doesn’t cost you anything, and while I can’t find an actual total, since I shop on Amazon a lot I feel that I’ve probably sent a significant amount of money to the EFF. Of course, I can’t imagine that they are happy with things like Amazon Echo, so perhaps there is a conflict of interest, but I still wanted to make people aware of it. 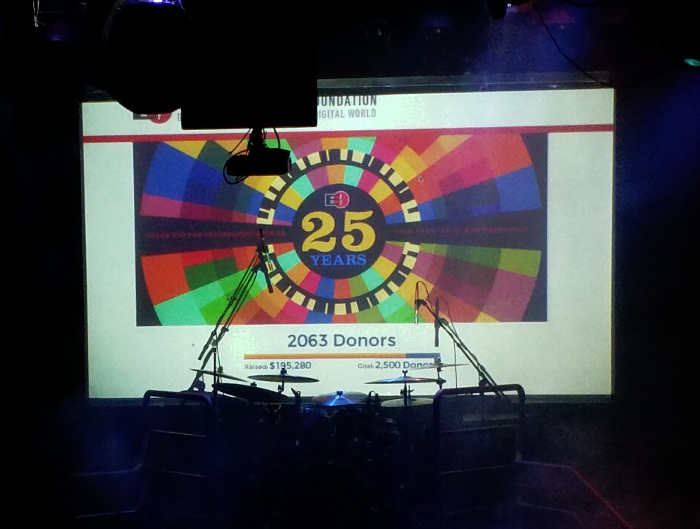 So, I grabbed an Uber, went to the party, met Maggie and got my new passport holder. I then made a pass around the club but didn’t really feel comfortable. These were my people but then again not my people. It was obvious many knew each other, and while I’ve never been one to have a problem with a room full of strangers (in most situations I make new friends) the environment was pretty loud and not conducive to conversation. I just didn’t have the energy so I left.

This means I missed seeing Wil Wheaton and Cory Doctorow, two more people I’ve never seen in person but would like to one day. From social media it seems like it was a good time, but I just wanted to grab some dinner and sleep.

Overall, I had a good time with the EFF. It is rare that I agree with everything even people I like do, but I can’t think of something the EFF has done in the last 25 years that bothered me or pissed me off. It is one of the few organizations that I regularly donate to, and I plan to leave them some money in my estate (if there is any left, I also plan to live for another 100 years and die after I’ve spent my last dime). If you haven’t supported them yet, I’d like to suggest that you do so.

Today I’m off to Portland for the CLS and OSCON, and these really are my people. I’ll let you know how it goes.