So, after this year’s Dev-Jam, several people followed us back to Pittsboro. Markus von Rüden, Ronny, Christian and Dustin all came to visit, as did Antonio. It was an extra week to get even more work done and a chance for us to socialize.

On Thursday Ben suggested we visit a really nice Japanese restaurant called Dashi in Durham. While downstairs serves noodles, upstairs is a bar with small plates. We rented the place out for a few hours. 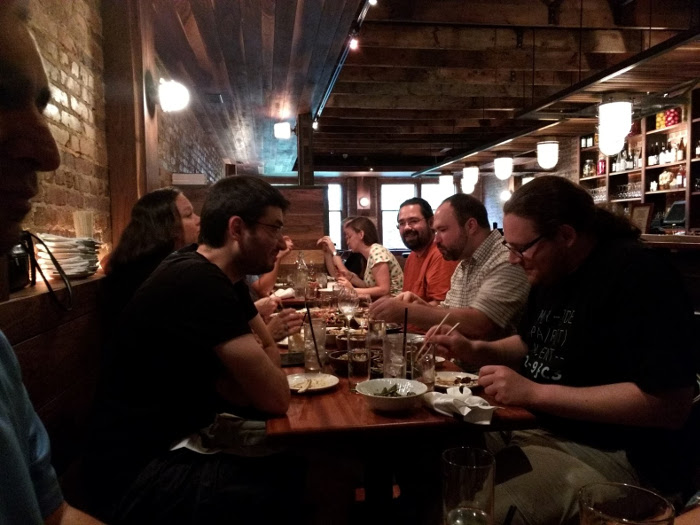 It was excellent. The food was delicious and unusual, and the drinks were splendid as well.

Since our guests weren’t leaving until July the 5th, it was only appropriate to have everyone over to celebrate July the 4th. I was finally able to make Fish House Punch (there is so much of it you need a large number of people to help drink it) and we did the usual 4th of July things such as cooking out on the grill.

The one thing we couldn’t do was fireworks, as there are pretty strict limits on them in North Carolina. I thought we could substitute a bonfire (I generate a lot of stuff to burn on the farm) but with the large amounts of rain we have been getting it really wouldn’t catch.

Then Jesse asked “Do you have any gasoline?”

Against my better judgment, I got some gas and while it improved things, the fire still wasn’t blazing like a bonfire should. Then someone suggested I get the leaf blower.

Now, I have a really nice leaf blower. It’s a four-cycle Makita that makes me feel like Magneto. It did the job. 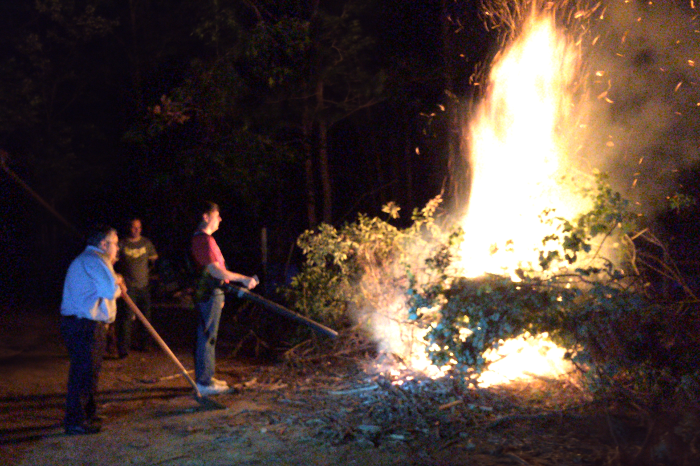 Remember, don’t try this at home.

Speaking of home, everyone made it back safely. It was nice seeing them for an extended period of time.

The next chance I get to see old friends will be OSCON coming up in two weeks. Remember that OpenNMS is sponsoring an MC Frontalot concert with the whole band at Dante’s on July 23rd. Hope to see you there.