Dev-Jam is an unstructured conference. Our goal is to simply put a bunch of incredibly smart people in a room and see what happens. That said, we do officially start and end the conference. On Monday morning we get together to make introductions and to talk about projects that we want to pursue during the week. This allows people with similar interests to work together if they want. On Friday we have presentations on what got accomplished. 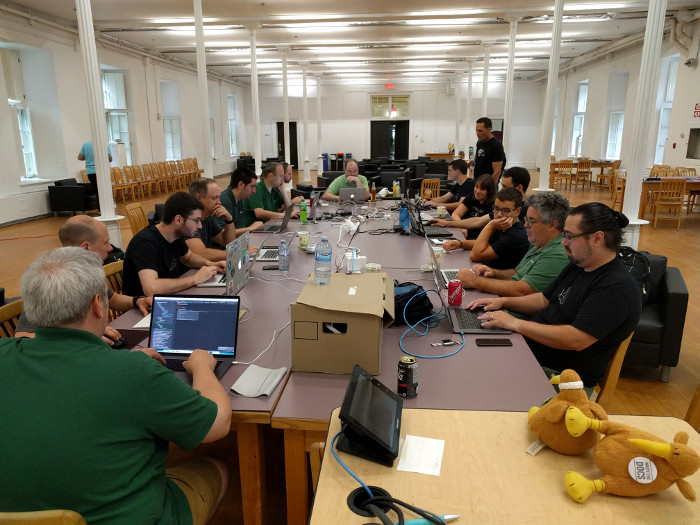 I usually start off the week, and then turn it over to Jesse White (our CTO and GM of The OpenNMS Group Canada). 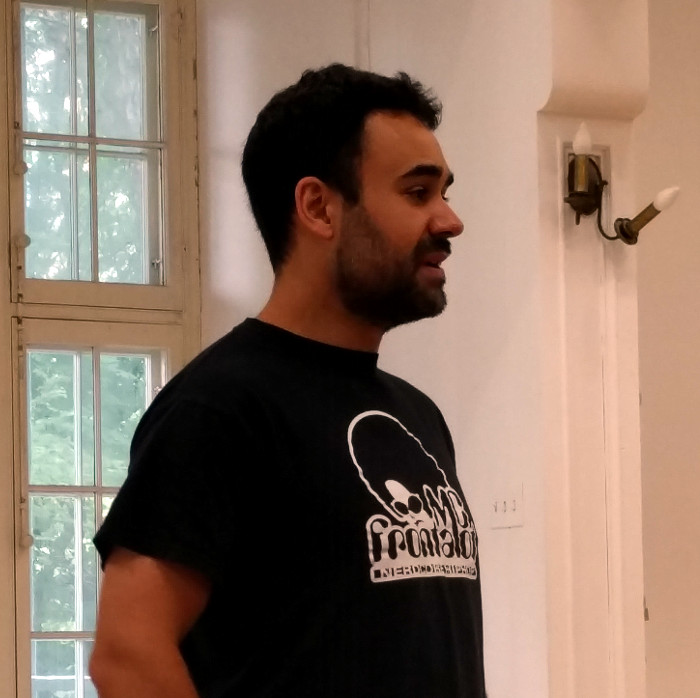 I thought it was cool that he was wearing an MC Frontalot T-shirt as we commissioned him to produce a free software song that we released on Independence Day (July 4th).

Another cool thing about OpenNMS is that we try to work as transparently as possible. While a lot of projects allow public access to their git repository, I believe OpenNMS is the only one that has a repository for every branch that automatically builds packages as commits are made (the list can be found at http://yum.opennms.org/repofiles/ but be patient as there are so many it can take a minute or so to load). We also publish a weekly newsletter called “This Week in OpenNMS” (or TWiO). This week Ben posted some ideas bouncing around this year’s Dev-Jam which include: 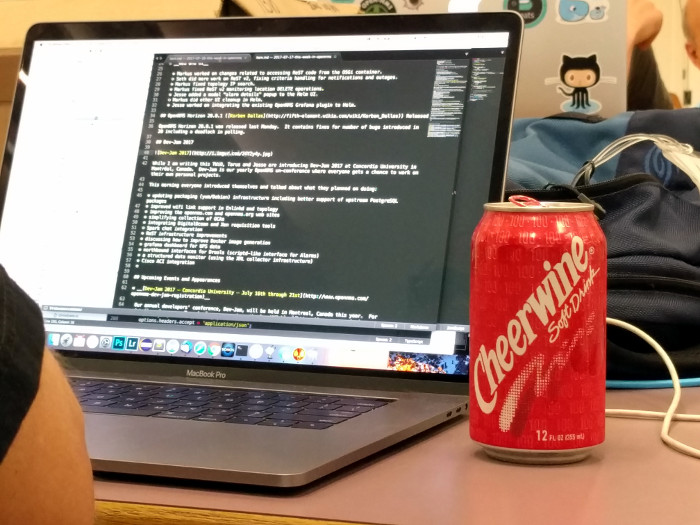 I should note that Ben is also a fan of that North Carolina export, Cheerwine. 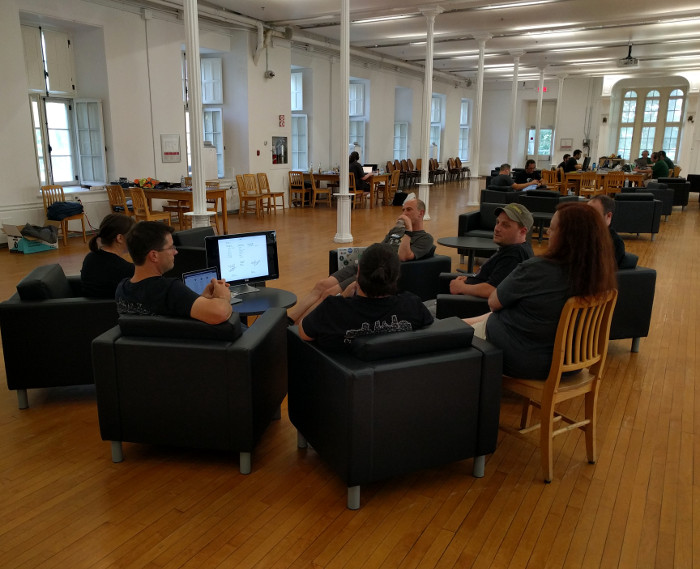 Jessica, our graphic designer, pulled together a meeting to discuss our web presence. We recently revamped the opennms.com website and we are looking to determine improvements needed for the opennms.org website.

Speaking of Jessica, she also designed our Dev-Jam shirts. 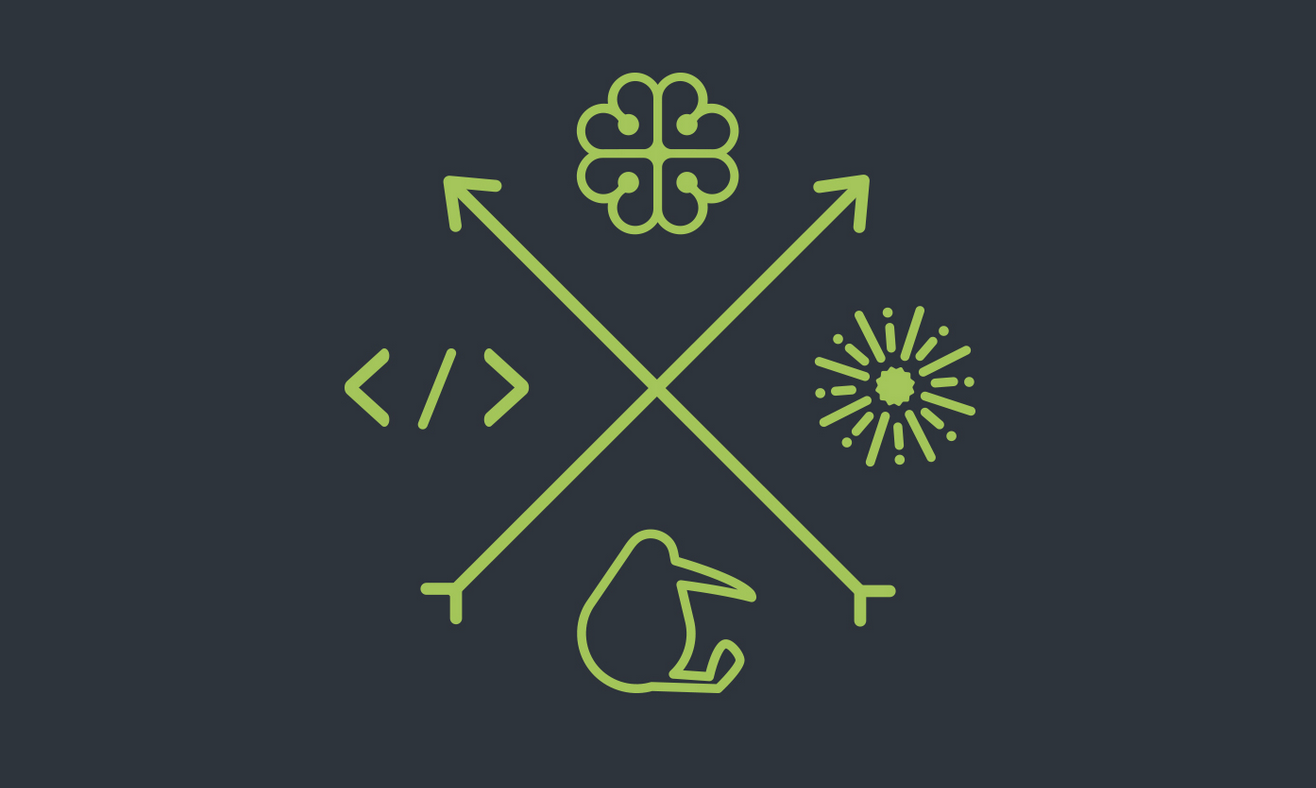 The front is meant to represent summer camp. 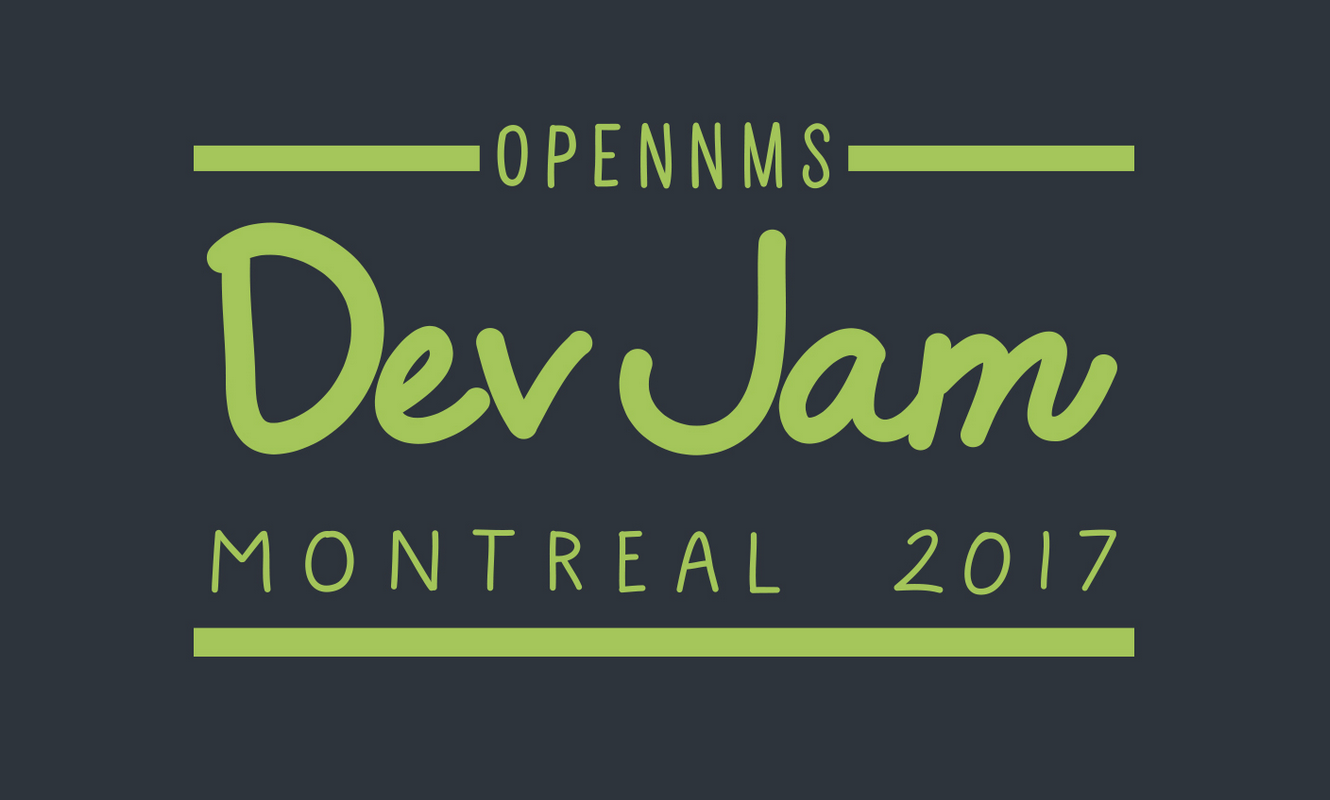 The top symbol is for Montréal, the bottom is Ulf the OpenNMS mascot, the tag to the left represents coding and the right image is for fireworks (we are attending the competition on Wednesday).

It’s not all work. Recently I read about a restaurant very close to Concordia (where we are holding the conference) that offered free meals to people who need them. I wanted to support that, so for lunch a group of us went to Marché Ferdous, which had been written up on sites such as CNN, the BBC and Huffington Post. 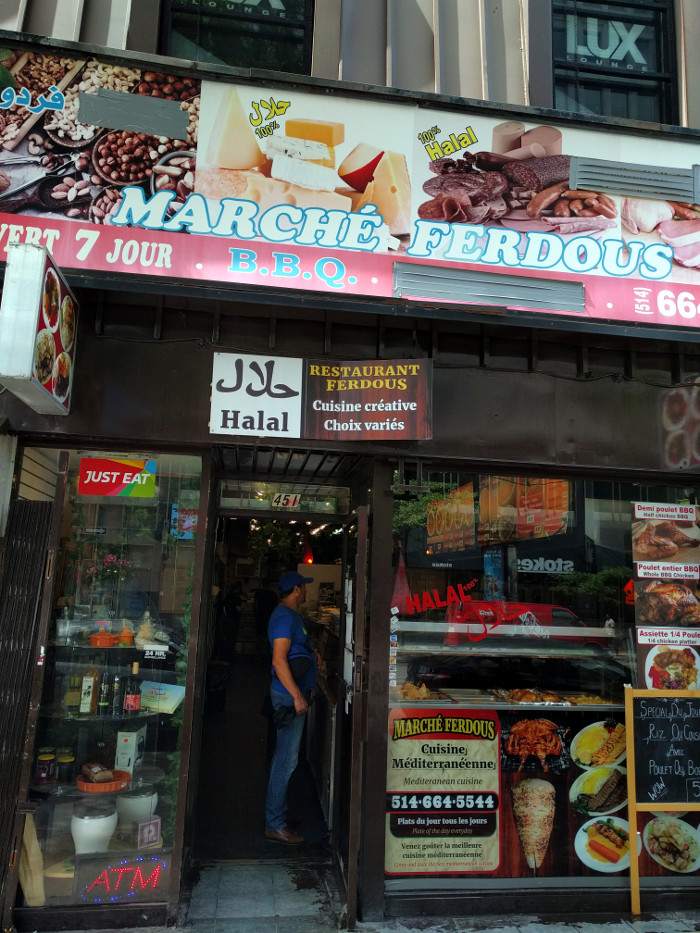 It’s a small shop a couple of blocks away from our dorm, and I got the falafel platter. 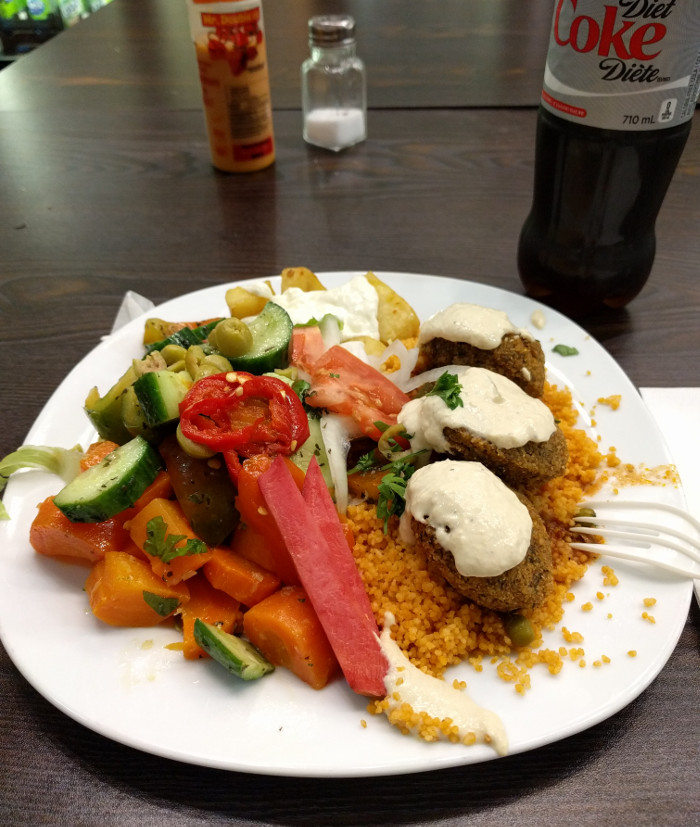 My meal was about CAD$10 so I paid with a $20 bill and told them to keep the change. Always gotta pay it forward, yo. (grin)

The falafel was just okay (I’m spoiled as I get to eat Angie’s falafel on a regular basis – some of the best falafel on the planet and I should know as I’ve had it pretty much all over the planet) but the sides were excellent. Everyone else got meat and really enjoyed it.

After lunch we took a side trip to a SAQ store to check out the spirit selection. Later that evening there was a tasting … 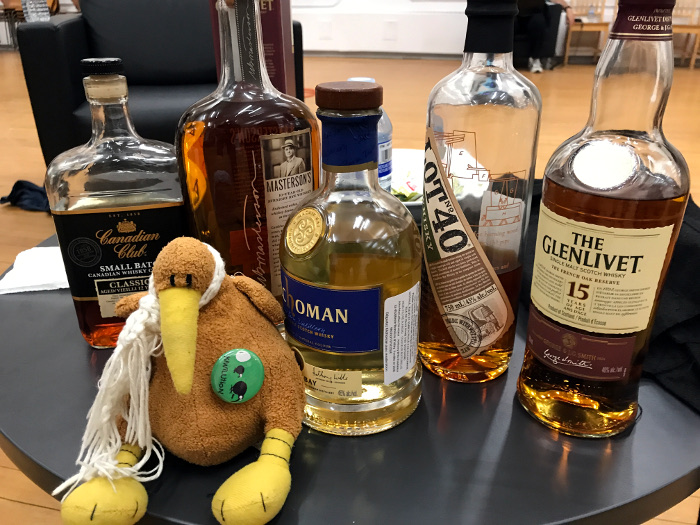 … which probably had something to do with the decision to screen Strange Brew, eh? 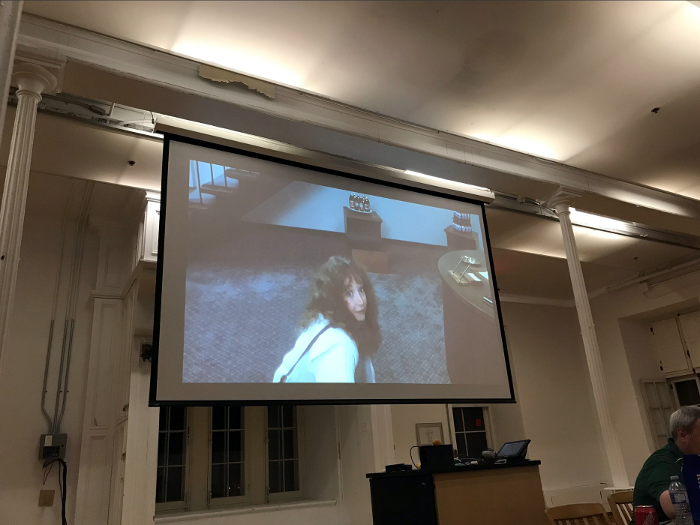