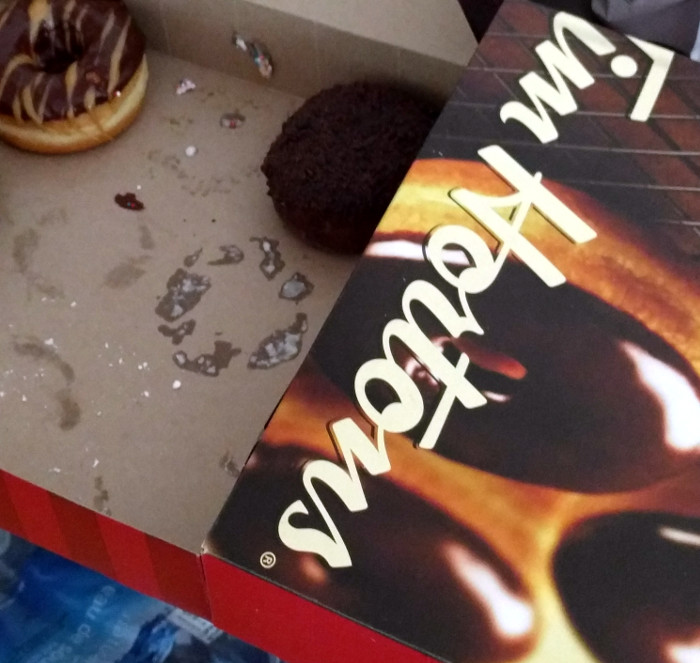 Lots of great discussions were going on. Ronny demonstrated Project Atlas, more formally known as the GraphML Topology Provider. This allows you to use GraphML to create topologies within the OpenNMS user interface. 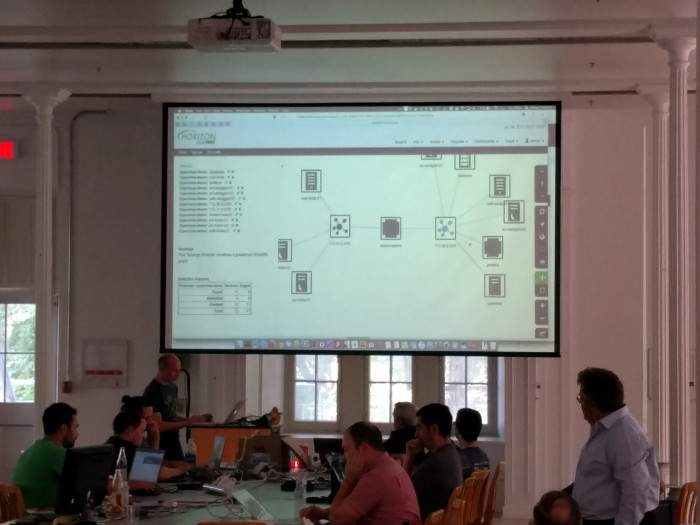 There is also a topology.xml file on the OpenNMS Forge github repository that can be used as an example.

Jesse gave us a demonstration of Project Helm. This is a Grafana plugin that let’s you combine fault and performance data from multiple instances of OpenNMS on one dashboard. 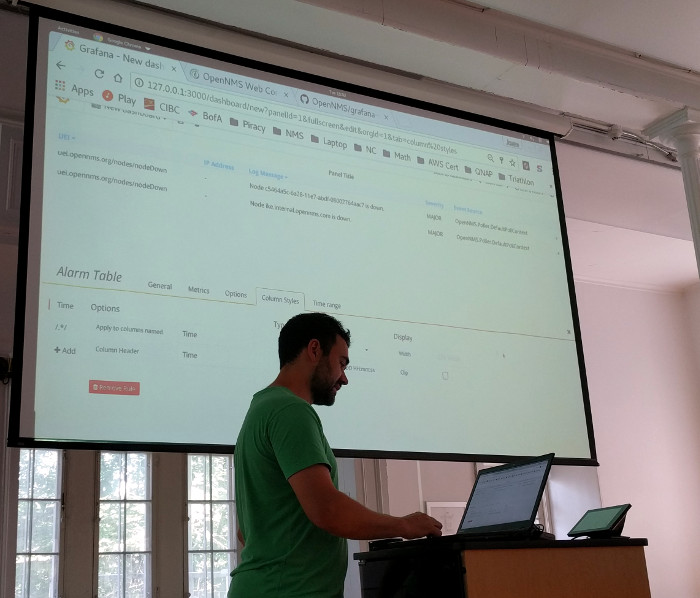 While it is just in alpha, the goal is to let users manage alarms directly from the dashboard, including acknowledging them, adding “sticky” and journal notes, etc. We have been working for years now on making a robust ReST interface for OpenNMS and it is really paying off by allowing us to create features like this. Since all of the communication between Grafana and the OpenNMS system (or systems) is via ReST, there is no need to store and manage data locally. 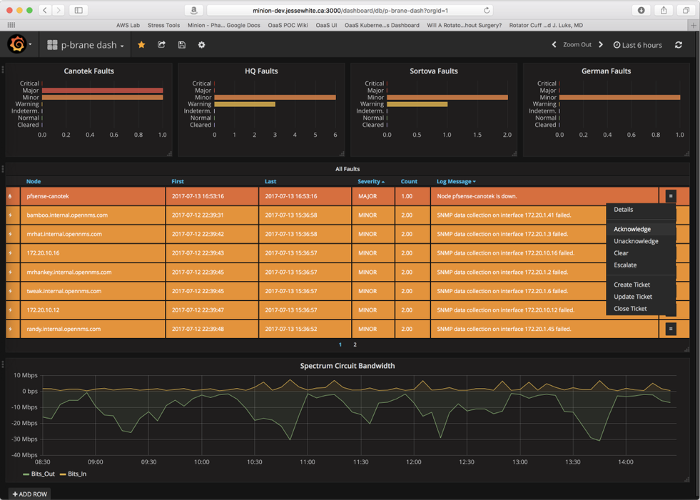 If you want to play with Helm, you should be running the latest Horizon 21 snapshot.

We have a person named Roberto attending Dev-Jam for the first time and I was eager to find out why he was interested in OpenNMS, so I spent some time talking with him. His company deploys underwater fiber-optic cable. Their customers used to be large telecommunications providers, but now they deal mainly with very large Internet companies, and those companies are requesting a higher level of monitoring information. It was one of those “very large Internet companies” that suggested they use OpenNMS, and it was interesting to learn about the challenges of running and managing undersea fiber.

Only a small part of the cable contains the fiber as most of it consists of a thick protective sleeve. The sleeve has to be thicker near shore since there is a greater chance of damage from things like ships’ anchors. Also, electrical current flows through the sleeve which attracts sharks, who then proceed to bite the cable. Here’s a video:

I’m eager to see how they end up using OpenNMS.

As I mentioned before, we are staying in the Grey Nuns Residence at Concordia University. According to Wikipedia there is a crypt in the basement where nearly 300 bodies are buried, most of them nuns who had lived at the Grey Nuns Motherhouse. It is off limits to visit, but I wanted to see if I could at least find the entrance.

Our conference is being held in a large room called E104, and most of the rooms of the people attending are also on the east side of the residence. My room, however, is on the west side and to get there I have to walk about 200 meters (it is a big place). You go out of E104, down to the basement and along a very long corridor before heading up several floors.

Along this corridor you will see a nondescript door, 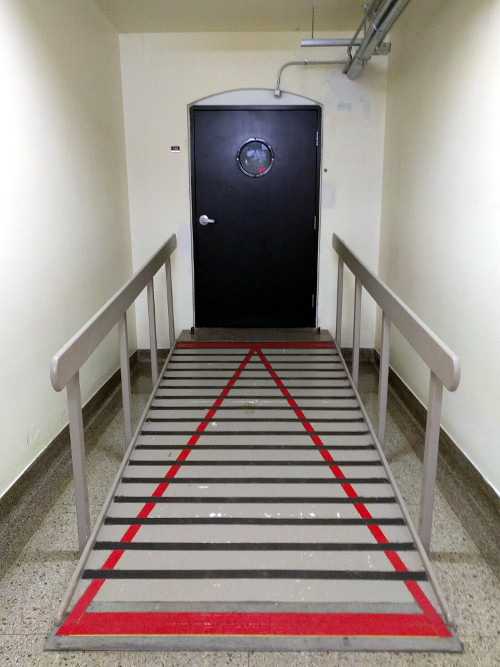 and if you peek through the little round window you can see into the crypt. 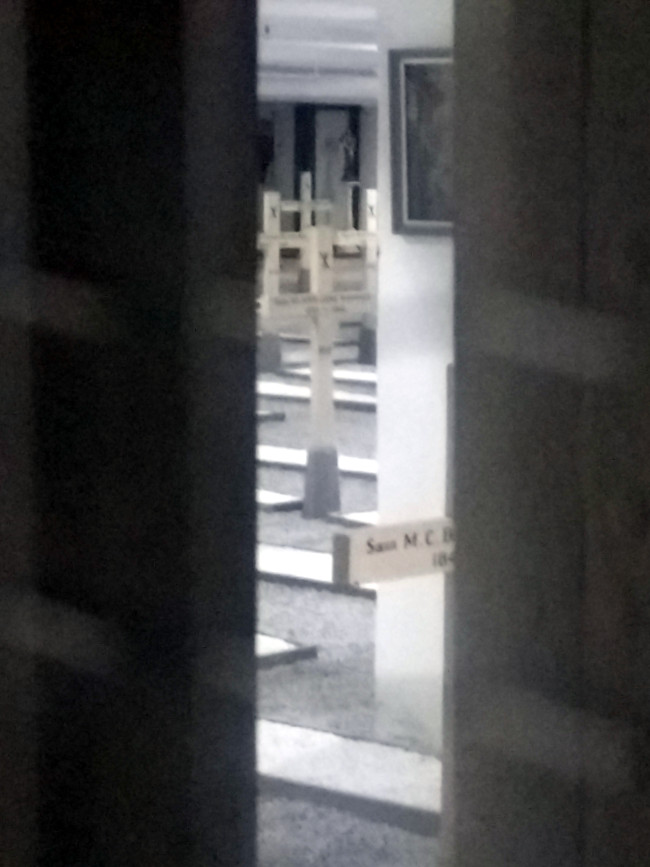 The graves are marked with plain wooden crosses, and the one nearest the door died in 1885, although there are certain to be much older graves in the crypt. Apparently there was a project to move the bodies out of Grey Nuns but the government balked due to the fact that some of the people buried there died of infectious diseases (the history of the Grey Nuns [pdf] confirms that several nuns died of the Spanish Flu of 1918).

It is a pretty solemn place and in stark contrast to the rest of the dormitory.

Speaking of things definitely not solemn, for dinner we all headed to a Japanese restaurant nearby called Kinka Izakaya. Izakaya means a pub, and the menu consists of lots of small plates, kind of like Japanese tapas. 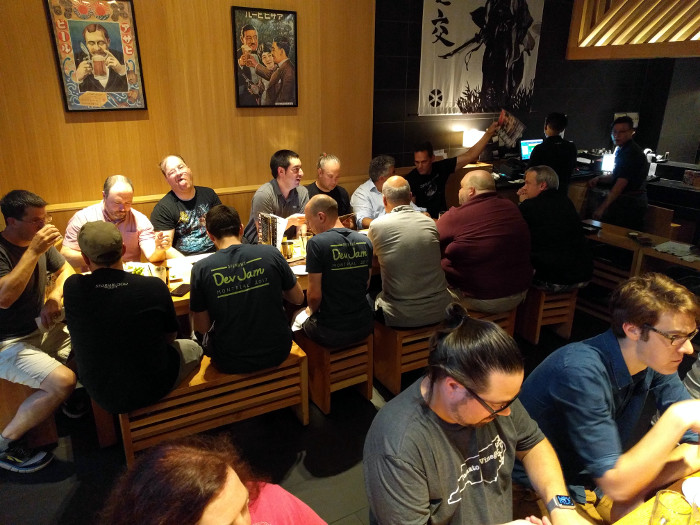 The place met a number of criteria: good food, can seat 24 people and close to the dorm. We also had to try a “Sake Bomb” in which a small amount of sake is suspended over a glass of beer. You then drop the sake into the beer and drink. Yes, there is video: