I had never been to a Red Hat Summit before this year. We are exploring running OpenNMS on OpenShift and so Jesse, David and I decided to head to Boston to see what all the fuss was about.

I noticed a couple of things are different about visiting Boston in spring versus winter. First of all, the weather was quite nice, and second, Boston can be freakin’ expensive.

And Red Hat spared no expense on this conference. This is the premiere event for companies in the Red Hat ecosystem and they obviously wanted to make an impression. I’m an “old guy” and I can remember going to huge shows put on by HP and IBM and this was on par. It took place at the Boston Convention and Exhibition Center (BCEC) which takes up about a half a million square feet. Red Hat used all of it. 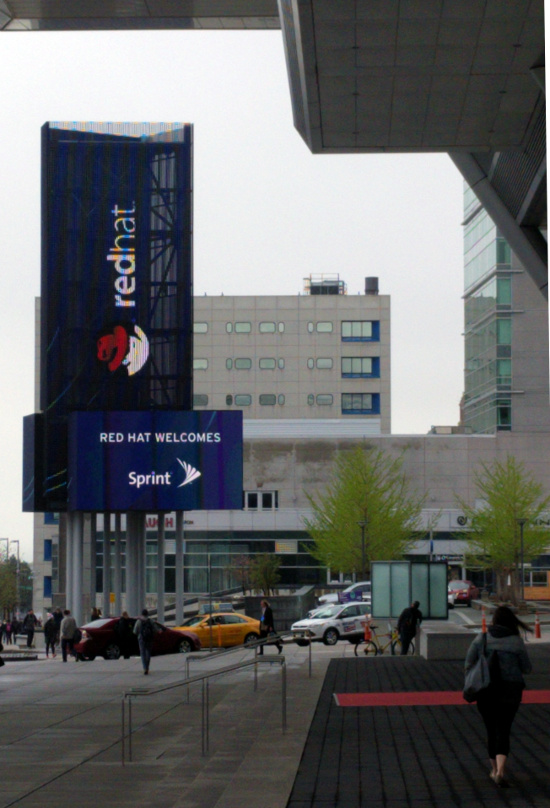 Nothing quite demonstrated the size of this conference than the main auditorium. The centerpiece was a huge screen for the presentation flanked by two smaller screens to show the speaker. That was needed since the place was so big you could barely see the person talking.

In addition to the general sessions, there were a large number of talks on pretty much anything related to Red Hat products, philosophy and partners. As a major player in “the cloud” there was a lot of emphasis on OpenShift and OpenStack, but the whole range of offerings was covered from Fedora and CentOS to JBoss and Gluster.

As with most tech conferences, there was an expo floor. This one was dominated by the color red. 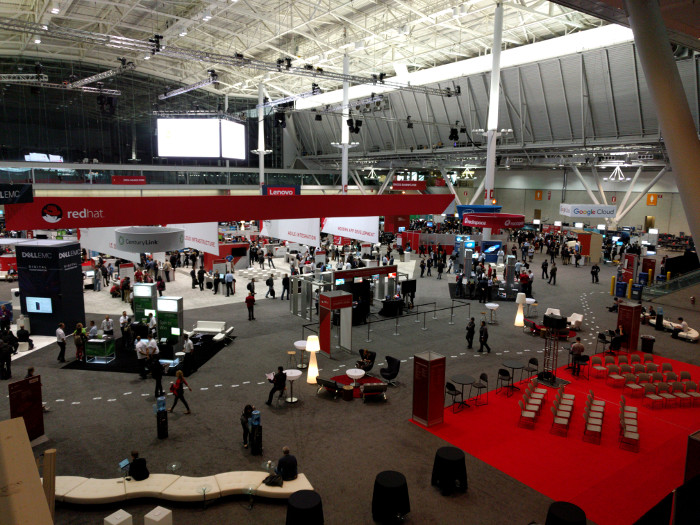 I spent a lot of time wandering around talking with people. Over the years a large number of my friends have been hired by Red Hat, and as I’ve curtailed my participation in a lot of the big Linux conferences, it was nice to see them again. I ran into Brian Proffitt and Ruth Suehle near the center of the expo: 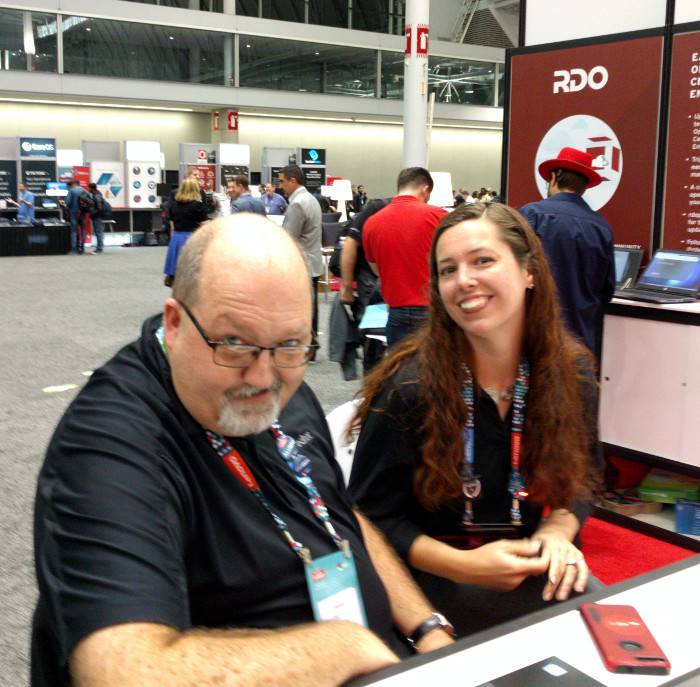 It was also nice to run into the Latvian army. The Zabbix crew had a booth and it was cool to see Alexei and Alex again, although it was ironic that I missed them on my trip to Riga (they were actually driving north to Tallinn when I was heading south). 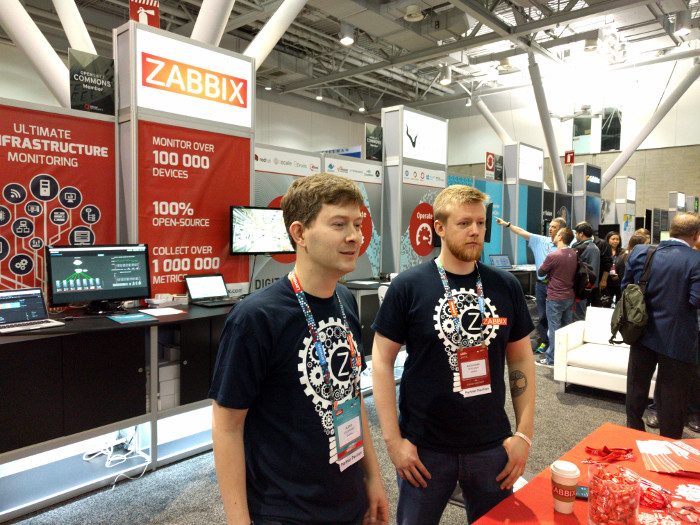 Zabbix, like OpenNMS, is 100% open source and thus not only do we get along, I quite like them and look forward to chatting about the joys and challenges about running an open source business when we meet.

Speaking of meeting, I also got to meet Brian Stinson of the CentOS project. 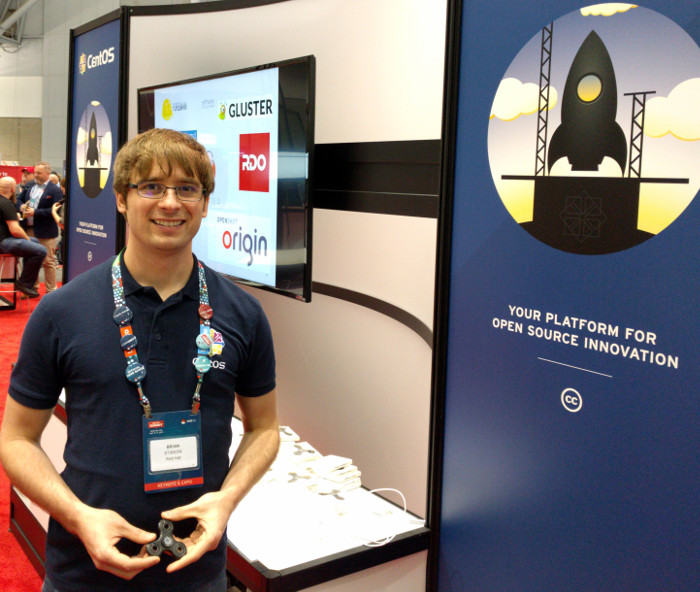 We swapped some stories and recounted the strange and funny time when Jerry Taylor, the City Manager of Tuttle, Oklahoma, claimed the CentOS project had hacked his city’s website. Has it been eleven years? Wow.

As part of the conference, Red Hat provided lunch. It was always a pretty hectic time since the show was packed and nothing demonstrated this more than trying to serve lunch to all those people. 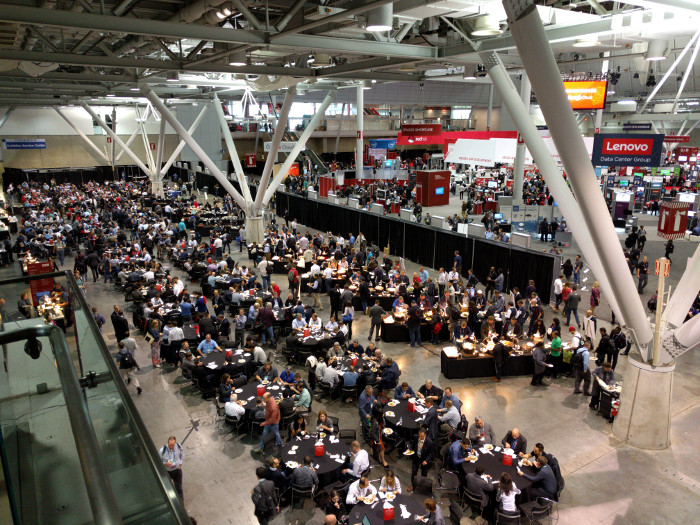 As far as conference lunches go, it was above average, but I did find it funny that they only served water to drink (usually there are cans of soda, etc.) I overhead one Red Hat employee say to another, you know, we can afford that gigantic screen but all we get is water?

On Wednesday night, Red Hat purchased a ton of tickets to the Red Sox game at Fenway Park. While I can’t find a reference to actual conference attendance figures, I heard the number 5000 being batted around which was a significant portion of the ballpark (it holds a little over 37,000). They gave us all red baseball caps and you could definitely see them in the crowd.

For our annual developers conference, Dev-Jam, we have about one-one hundredth the amount of people to see the Twins play, but we also get better seats. (grin)

It was my first time at the historic Fenway Park, and the fans were almost more fun to watch than the game. I also enjoy trying to explain the game of baseball to people from outside the country, and this was made more interesting by some bad blood between the Sox and the Orioles that resulted in the ejection of the Orioles’ pitcher for hitting a batter.

Fenway is relatively close to Cambridge, so I took the opportunity to visit a friend of mine who is a professor. I decided to walk to Harvard Square along the river, where the rowing teams were practicing. 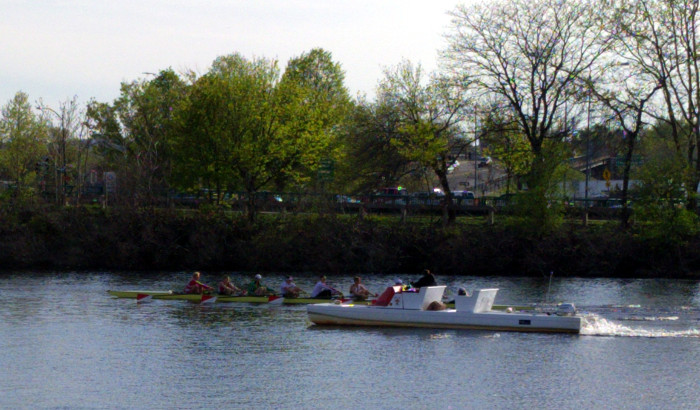 Now whenever I see a movie featuring Ivy League students on the water, I’ll know where that was shot.

It was also nice to be able to spend some time with David and Jesse. While I work with David almost daily, we’re so busy that it is hard to find time to talk strategy and plan for the future of OpenNMS. Jesse, our CTO, moved back to Canada after the birth of his son to be closer to family, and it was also nice to have time to spend with him. Walking to dinner one night David took this picture 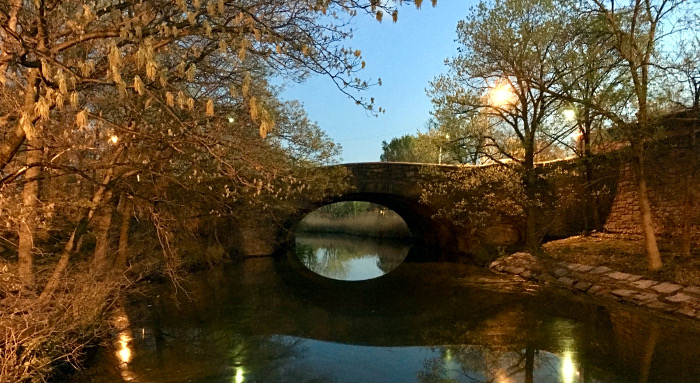 which turned out so much better on his iPhone 6S than my Nexus 6P.

I often say that Red Hat, as a company, doesn’t get the credit it deserves since it is headquartered in North Carolina and not Silicon Valley. Our companies share a similar philosophy of taking care of customers, creating great open source software and producing steady growth, versus, say, chasing unicorns. It was wonderful to see that work demonstrated in such a large and professional conference, and I hope next year I’ll get to speak (although I doubt it will be on the big stage).