TL;DR; Two years ago, Angel Sensor ran an Indiegogo campaign to create an “open sensor for health and fitness”. They implied that the software would be open source. I finally got mine this week and it is total bollocks. Not only is the software not open source, the app that goes with it is barely an app. There is little communication from the vendor to the community, and while the hardware is solid, it is too expensive to manufacture so the “classic” model is obsolete on delivery. Don’t deal with this company.

Okay, so I like metrics. I work on an open source project to monitor anything you reach over the network. I have a weather station at my house and a temperature sensor in my workshop. I am very eager to gather information about what’s going on in my body, and while companies like Fitbit make great products for that purpose, I distrust sending this most personal data to a third party.

So a couple of years ago I did a search on “open source fitness tracking” and came across Angel Sensor. This company claimed that they were going to create an open health platform where the software would be open source, so I bought an Angel Sensor wristband and eagerly awaited its arrival.

Two years later, it finally arrived and it is a total disappointment.

The packaging is nice. 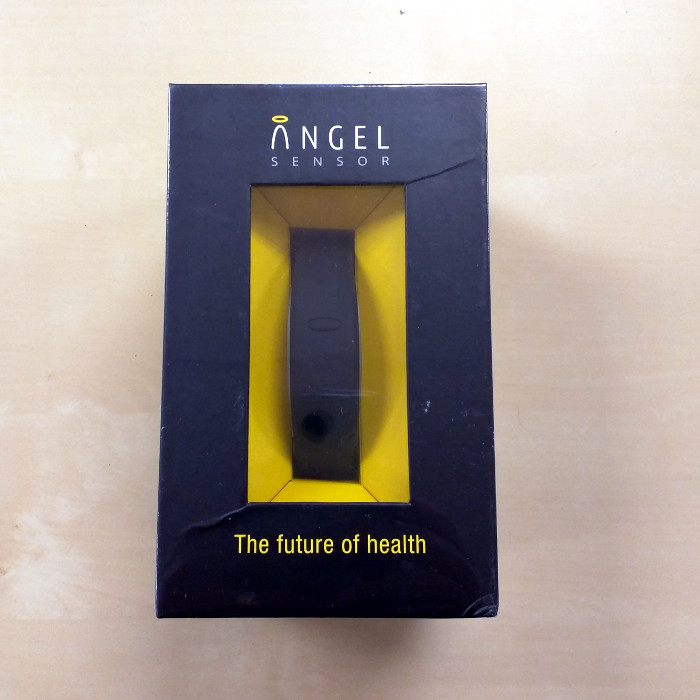 The band itself is in its own compartment, and on the side of the box is a little drawer that you can pull out containing the accessories:

You get the band, a small instruction booklet, a charging cradle and seven flexible clasps (of various lengths) that help hold the band to your wrist.

I picked out a clasp and pretty soon had it on my wrist: 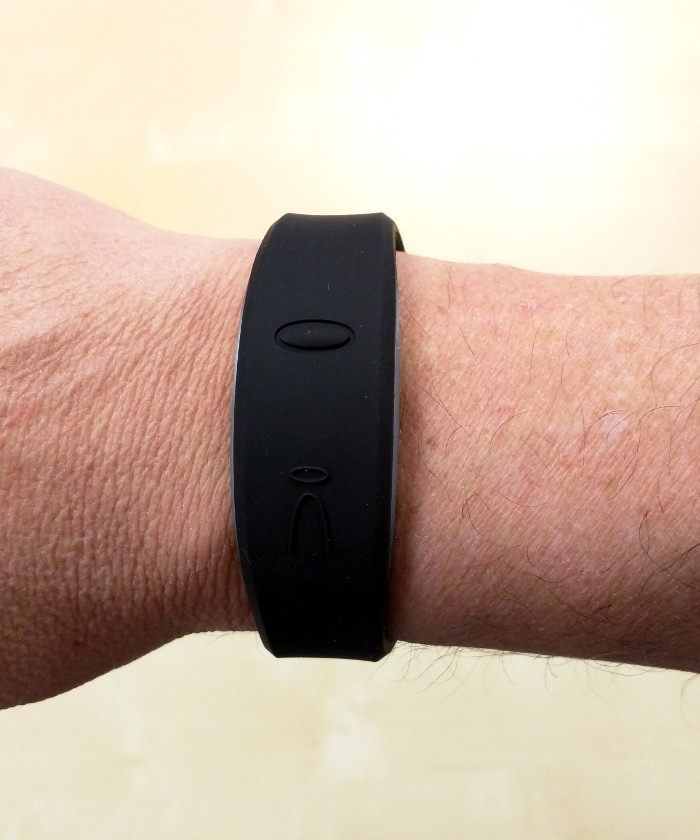 Although heavier than I would have expected, it felt comfortable, something I could wear 24/7. My LG Urbane watch is slightly thicker but overall a bit lighter: 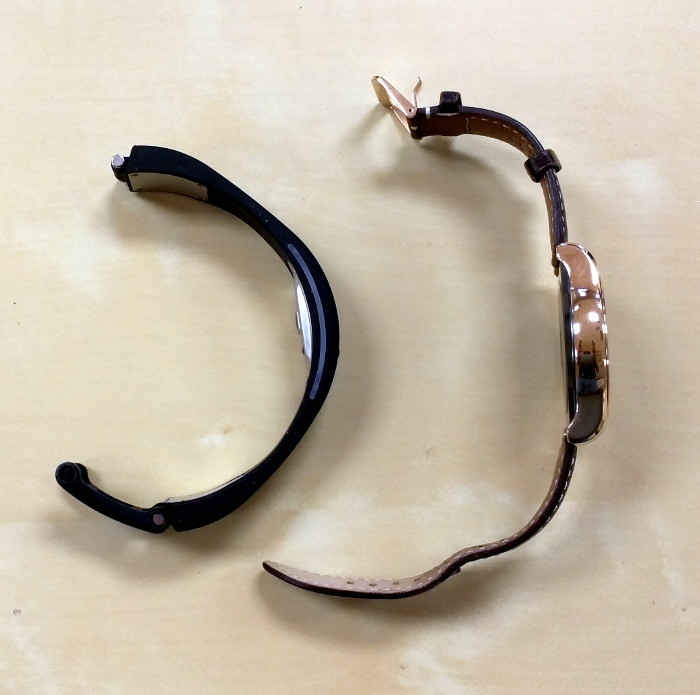 The instruction booklet says to charge the band fully before using, and this is where the problems started. The “classic” uses a charging cradle. At both ends of the band (where the clasp connects) are metal studs. You insert one set of studs (marked on the band) into the cradle to charge it. The problem is that there is nothing in the charger to really grab on to the studs, so in my case it kept losing the connection and charging would stop. I had to prop it up at an angle in order to keep a connection, and even then I wasn’t sure about it staying in place.

Which is a shame, since the band itself is rather stylish. While there is no screen, there are two white LEDs on each side of the band that can glow and pulse to let you know something is going on. I kept having to keep an eye on the LEDs to make sure the thing was still charging.

Note that all this is moot since the classic proved too hard to produce. The new unit is called the M1. The M1 is thicker and you lose water resistance, which I think is an important feature. While I don’t plan to dive with a fitness tracker, I might wash dishes while wearing it, so the ability to be submerged in liquid for a small amount of time is a requirement. The M1 does use a standard microUSB charging connector so that is a plus in its favor.

Summary to this point: solid hardware design, although now obsolete, with a major flaw in the charger.

My real disappointment set in with the software.

I knew something was wrong when they announced on their blog that the first app released would be iOS only. Now I don’t have a problem with people leading with the iOS version, it is a huge market, but when your market differentiation is based on being “open” one would assume that an Android version would be first to encourage more contribution. Alas, the Android version seems to be more of an afterthought. You want to see it? Here it is: 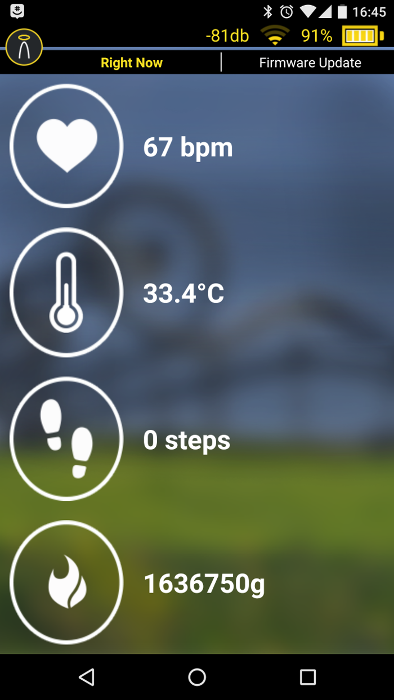 Yup. You’re looking at it. No menu, no explanation, just four values.

To get to this point, I downloaded the app from Google Play, launched it, and then paired it with the band. You do this by tapping on the band’s button once, which will cause it to vibrate. The sensor will then show up on the app’s screen and you can connect to it. Note that you have to do this every time you launch the app, or at least I did. The sensor will be identified by a number and a MAC address.

On the main screen you get what I assume to be heart rate, body temperature, number of steps and some unknown value represented in units of “g”. No history, no way to, say, gather and export collected data, no way to even change the temperature units from Celsius to Fahrenheit. The title bar does show connection strength and battery life, but the only other thing is a tab for firmware updates. From what I can tell, it doesn’t actually check anywhere for firmware updates, but it would give you the ability to install one should it be released.

Of course, the app doesn’t tell you the current firmware version, and there doesn’t seem to be a download section anywhere on the Angel website (the support section is just a duplicate of the FAQ section).

Oh, and if you turn it sideways, you get some graphs. 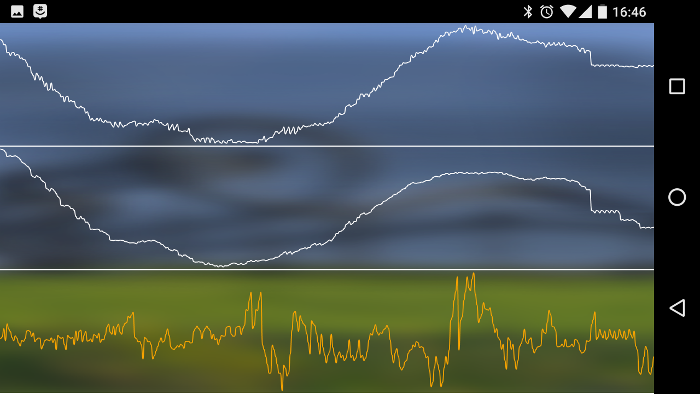 No explanation of what is actually being graphed, but it does wiggle around a bit. I did find a Youtube video that suggests the top two graphs are heart related and the bottom one is motion, and the IOS app shown in the video has more features, but since I don’t have a modern iPhone I couldn’t check it out.

Since I couldn’t believe this was it, I kept searching for software related to the Angel Sensor. I did manage to find some code on Github (which appears to be an SDK for accessing the API and perhaps the sad Android app). Of course, the License file is incomplete and doesn’t really say under what license the software is published. Once again people, access to source code doesn’t make it open source.

And this is the biggest flaw with Angel Sensor and one reason I have such an issue with the current technology environment. You have people like Paul Graham crowing about creating income inequality and that has resulted in a new start up life cycle. You come up with an idea (that hasn’t changed) but now you wrap it a bunch of buzzwords, like “open”, “IoT” and “mobile”, even if you don’t really understand what they mean.

Next, you raise some money through crowdfunding, often underestimating the amount needed so your “funding” can be a success. Now, remember, your audience isn’t the poor saps who decided to give you money – you want to show viability to VCs who can deliver the money you’ll actually need. You use the initial cash to build just enough product to either get a lot of investment or get acquired by someone wanting to cut a year or so off developing their own product. This is considered “success” in some circles.

This whole thing is a shame since there is a market for a truly open mobile health platform. I’m not insisting that the hardware be open (I’m not going to build my own silicon molds) but all the software, including the firmware, should be available under an OSI-approved license. Then you need to focus on building a community, and that really requires good communication.

In addition to the total lack of documentation, even their blog fails miserably. In the last half of 2015 there were a total of three posts, the last one from 3 November. I used to be able to get a rapid response from a person named Io Salant, but when I wrote to them a few months ago asking for a status I got:

Io is on a well-deserved leave. Your email has been forwarded to hello@angelsensor.com
The team is quite busy, but will make every attempt to get to your email as quickly as possible.

Of course, never heard back. So my now “classic” Angel Sensor is destined for eBay.

In summary, this is another case of a crowdfunded effort done by people in over their heads with no real desire to create something that lasts but to make money at the expense of their customers. I wouldn’t trust Angel Sensor to feed my dog, much less monitor my health, and I can only hope someone with actual ability will come out with a truly open personal medical platform.