On my second day in Portland, I spent the morning working and then made my way on the MAX to my final hotel downtown. 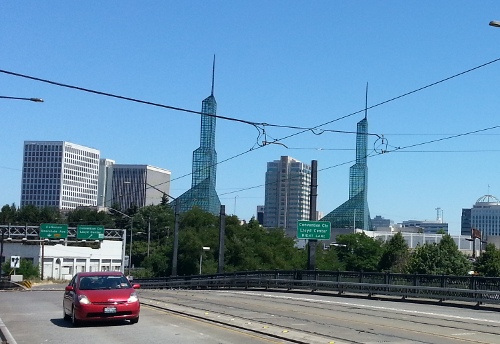 The weather is so nice here that I decided I would walk to the Convention Center over the Steel Bridge. Actually, I wanted to get in some Ingress time and I figured the best way to do that would be on foot. Unfortunately, while there are lots and lots of portals downtown, the buildings make getting a decent GPS fix difficult, and so it was a little less fun than it could have been.

Anyway, I made it to the conference without incident, and had to laugh when I was greeted with this: 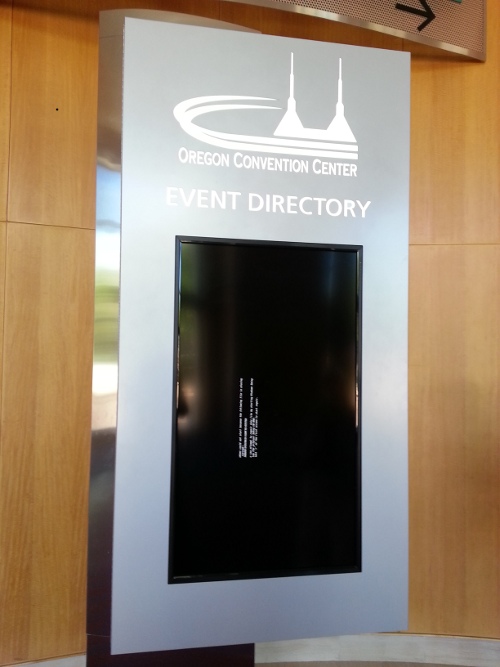 Now, public displays disabled due to Windows error messages are so common as to border on cliché, but it seems a little ironic to see one at an open source conference. 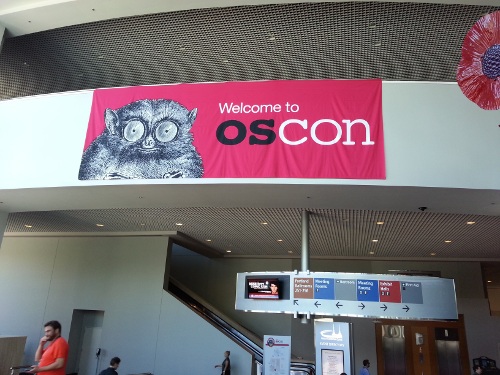 I got my “Expo Hall” badge and made my way onto the show floor.

It’s pretty crowded this year, and I would venture a guess that this is an indication that the economy, at least in the tech sector, is turning around. They did have some nice touches, like a set of systems set up to run Starcraft and the perennial big chess set. 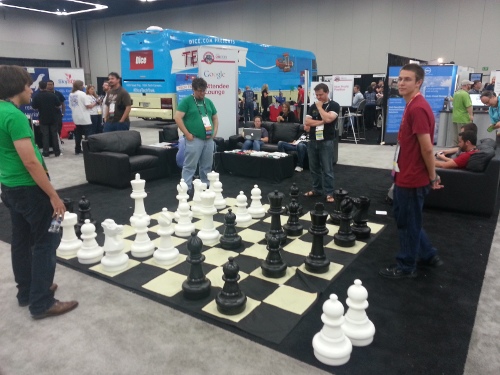 The first booth I visited was the one for Microsoft. Speaking of clichés, I’m sure I wasn’t the only person who said “Hey, where’s my free Surface RT?”. I went there specifically to talk with my friend Gian. Microsoft has actually been very helpful to the OpenNMS Project by providing us with an MSDN account so that we can test our application against various versions of Windows, and Gian has been my main contact with respect to that. 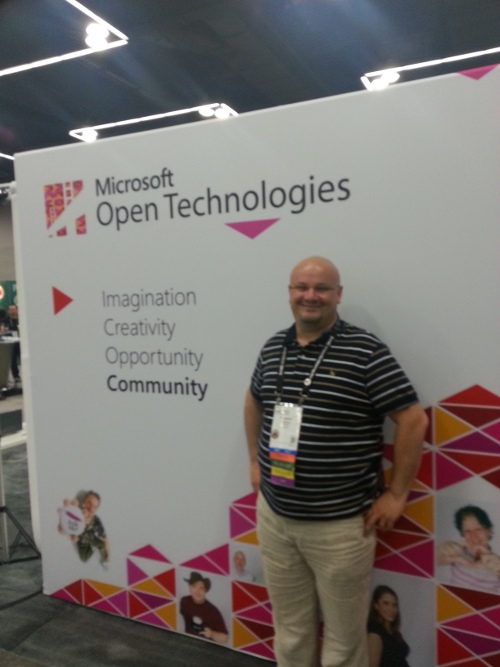 They also had a pretty cool idea for their booth. They hired photographer Julian Cash to take pictures of the attendees. In the booth is a large white backdrop, a bunch of geeky/techie props, and a lot of lenses for his Nikon. He spent about 15 minutes with me, and I’m eager to see how the pictures turned out. I watched him work with a number of people throughout the day and it was a lot of fun.

Near the Microsoft booth was Canonical. In case you have been under a rock this week, Canonical announced a rather ambitious plan to raise US$32MM to produce the Ubuntu Edge. It’s a smartphone but with a different agenda than most. The idea is to create an integrated environment so that your PC/Laptop is actually the phone itself. At your desk you would just have a keyboard and monitor, and your desktop software would run directly off the phone – no need to sync, etc. What really intrigues me about this idea is that they are trying to raise the funds directly from the consumer through Indiegogo. There are two basic perks. One is you can contribute a small amount to show support. The other gets you a phone when it comes out. The prices are tiered, so the first perk had the phone at US$675. All 1250 of those are sold out, so the next cheapest option is US$50 more. Once those 1250 are sold, it goes up another $50, etc., to the maximum of US$830. 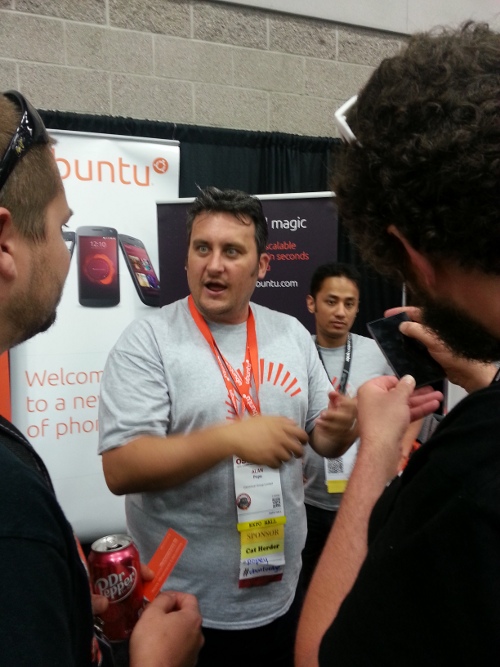 I got to see Alan Pope again, which was nice, and he demonstrated the basics of the device (it current does make calls and send texts, although MMS is a couple of weeks away yet). They have ports for various other smartphones (well, Android-based phone, of course). Currently it boots into Android and then runs the Ubuntu kernel, but I was told that starting next week that process will be reversed, with Ubuntu booting first.

If you are interested in these sorts of things, I would suggest getting your order in early to save a few shekels. If the goal isn’t met, you get your money back. And of course, I had to use OpenNMS to track the status of the project. As I write this they are just shy of US$6MM.

While hanging out near the booth I did run into Jono Bacon. As one of the official mouthpieces for Canonical, you can imagine how busy his schedule is with this announcement, so I was grateful for what little time I got with him. Actually, I was just using him to find out if Erica Brescia (his much better half) was around, and I found her at the Bitnami booth (they met at a LUGRadio Live event back in 2008 and I happened to take one of the first pictures of the two of them together. Man I’ve been doing this blog thing too long). It was really nice to chat with her, as she always has some great insights and advice about the business aspects of open source software. 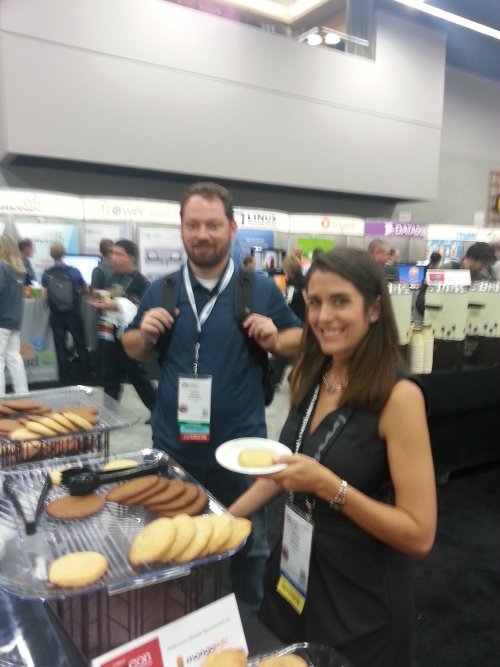 I made my way around to the back of the show floor (I always refer to those little out of the way booths as the “geek ghetto”) where I was happy to get a few minutes with Simon Phipps. His out fighting the good fight with the Open Source Initiative, the group that gave us the open source definition among other things. They are making a number of very positive changes, including moving from an appointed to an elected Board of Directors, and if you appreciate open source software I strongly recommend you become a member. Plus, I might one day make a run for the Board myself, and I’ll need all three of my reader’s votes. 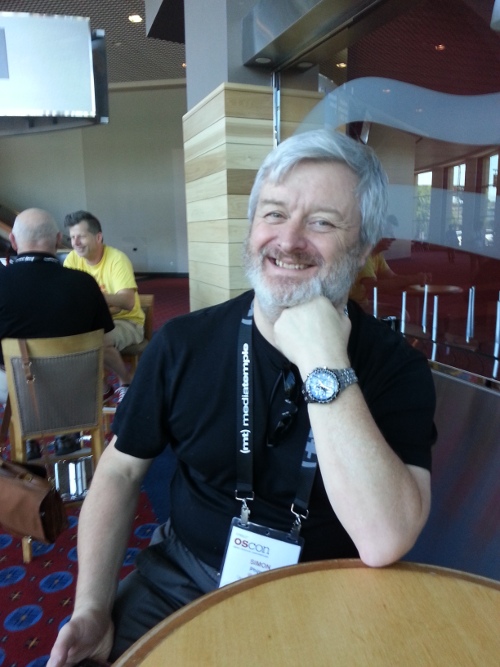 The rest of the afternoon was spent socializing. I got to see my friend Greg (he used to work for ADP Dealer Services, one of our clients, before he moved over to a non-profit) and we decided to get dinner together. I recommended this place called Clyde Common that was excellent. You sit “German Style” with tables for eight, and it was coincidental that the four people who sat down next to us were from O’Reilly in Boston. 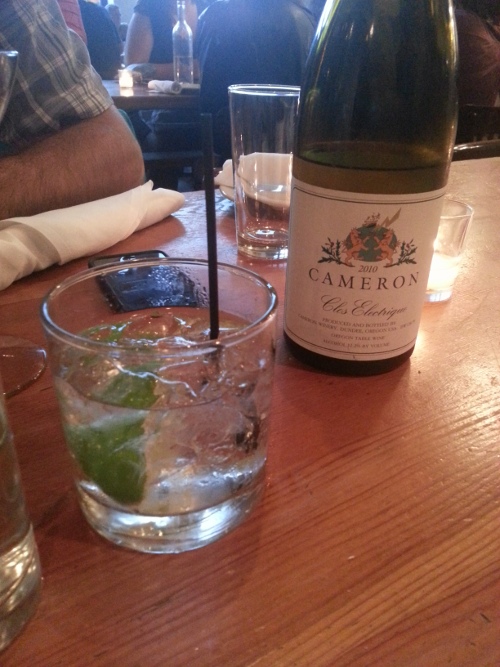 Toward the end of the meal, Greg’s friend Garrett, who still works at ADP, arrived with his new bride Megan. Megan is a flight attendant, so I got to get my airtravel geek on. While one of my favorite places to drink in town is Vault Martini (we will be there on Friday, starting around 6pm, if you want to join us for drinks and OpenNMS) we were directed to place called Teardrop. As someone who is into artisanal cocktails I found the place to be top notch, but I think I like the atmosphere at the Vault a little better. 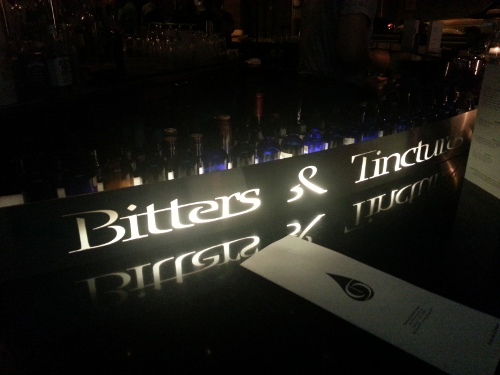