So, what do you do when you find yourself in Portland, Oregon, a day earlier than you expected? Why you spend a couple of hours jamming to a twelve piece Romani brass band, ‘natch.

But maybe I need to back up a bit.

I travel a lot, and for the most part I really enjoy it, especially when I get to visit other countries.

It was in Portland several years ago that I realized that the United States is so large that it is actually possible to get that “foreign country feeling” without leaving. I was with a friend having drinks in this outdoor café, enjoying one of those rare beautiful Portland summer evenings and watching the people, when it dawned on me that the people in Portland are very much different than the people in, say, San Antonio, Texas; New York City; Chicago or Pittsboro, North Carolina. Even though we share the same language and currency, the differences are strong enough to qualify, culturally, as much as traveling to another nation.

Thus I always look forward to a trip to Portlandia.

For many years I always got a paper accepted at the O’Reilly Open Source Conference (OSCON). Last year, however, my topics were not accepted, so this year I cranked them up a notch. Still no love. I think I may have pissed someone off on the paper committee. I remember meeting this young woman at the Open Source Think Tank last year who helped decide on speakers and she was one of those “Go Big or Go Home” types. It is that attitude which is now so pervasive in Silicon Valley that has, to some degree, soured me on the whole area. The focus seems to be to make as much money as you can, which I think is an attitude doomed to fail.

Not that I’m against making a lot of money. I really would like to have a lot of money, but the way to do it is to focus on your customers. Make something they want, treat them well, have fun (extremely important) and the money will come. But if your only focus is money you’ll forget the customers (who are responsible for giving it to you in the first place) and the money will either never show up or it will go away.

I think I might have said something to that effect and thus got on the “no speaker” list. (sigh)

Anyway, I am digressing more than usual. It turns out this year’s conference coincided with another trip, so I got an “Expo” pass to OSCON and planned to come up for a day to hang out with some friends there as well as to visit some customers (the City of Portland is an OpenNMS client).

The other trip involved meetings in Silicon Valley, and I flew out on Monday expecting to spend Tuesday and Wednesday there and then up to Portland Wednesday night. Unfortunately, the business partner who was to join me came down with a nasty stomach issue, so the meetings got postponed. I called the airline and got my flight moved up a day, and I was excited to get an extra day at the conference.

While I was waiting at the San Jose airport, I caught up on some e-mail. One note was to some friends of mine who live in Eugene, Oregon. Every year they hold a big party on the Fourth of July and for the last two years we have made plans to attend but had to cancel. There was no way for me to visit them this trip but it made me at least want to say “hi”.

Soon after sending the e-mail, my phone rings. It turns out that they were on the way to Portland to see a band, and would I be interested in joining them?

If I could give any one piece of advice to people, it would be to take advantage of things like this. Even if you are dead tired – when you get an opportunity to experience something new, take it. I developed this philosophy back in 2003. I was in Japan for an OpenNMS training gig, and on my last day an ex-pat from the States calls me and invites me out. I was incredibly tired, but I figured what the heck, when would I be back in Tokyo again? Turns out I haven’t gone back yet and that night in Shibuya is still one of my fondest memories.

Anyway, back to Portlandia. I landed, ran through the airport to the hotel shuttle, had them call me a cab as we drove, checked in, dropped my bags and headed to the Alberta Rose Theatre. 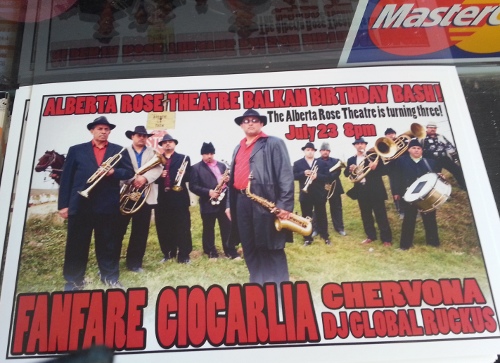 The Alberta Rose is an old school movie theatre that opened in 1927. It closed in 1978 but now has been reopened as “Portland’s premier setting to experience acoustic music, art house films and live performances”. We met there about 7pm and hit the Thai place next door before the show started at 8pm.

The opening act was a band called Chervona, made up of mainly of ex-pat Russians. They consisted of seven pieces: drums, bass guitar, accordion, clarinet, two trombones and guitar. The lead singer/guitarist reminded me of a cross between Rick Nielsen from Cheap Trick and the lead singer of Midnight Oil. One standout musician was the clarinet player – he was simply amazing, and on a couple of songs he played with the headlining band (that’s him on the far left of the next picture).

They played for about an hour, and after a short break the main attraction took the stage: Fanfare Ciocărlia. This is a raucous twelve-piece Romani brass band (Romani from the Roma people and not Romania) and they play music at a speed that makes “Flight of the Bumblebee” sound like a funeral dirge.

It was pretty amazing. I also liked the fact that there were several generations on stage. Most of the performers looked to be in their late 30s to early 40s, but a few looked younger and a few were older. It was non-stop energy, and the crowd seemed to love it. At one point there were more dancers on stage than band members, and considering how many band members there were, that was quite a feat. 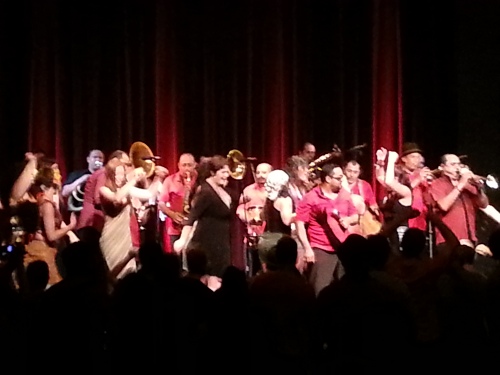 It was also the third anniversary of the reopened Alberta Rose, so they were handing out chocolate birthday cake. It wouldn’t be Portlandia without microbrews, and the evening’s libation was a double red ale called “Believer” (I thought the lady tending bar said “Belieber” as in Justin, but was promptly corrected). While I tend to find Oregon beers slightly bitter for my taste, it was pretty darn good.

At the end of the show they did an encore (one song was their take on the James Bond theme) and then they just started playing in the aisles. I think the plan was to march around the theatre, but the crowd was so tight that they stopped after about 30 feet, played, and then slowly made their way back.

So even though I didn’t get to bed until well after midnight, it was so worth it, if just to see my friends. If you count experiences as wealth, my account balance is now much better off.