As the iPhone 5 announcement pushes AAPL over $700/share, it is obvious that Apple has another hit on its hands and will be adding even more to its coffers (one of my friends ordered three). As someone who is happily moving away from Apple, I pretty much could care less about the announcement, and I have to agree with Brian Prentice that the iPhone announcement was a little lame.

What is Apple ultimately offering with the iPhone 5? Speeds and feeds. New processor, larger screen, different connector, LTE support. thinner form factor. Don’t get me wrong – these things are important. And they constitute some fantastic engineering work to hang it all together. But is it fundamentally changing my experience with a smartphone? No, not really.

Despite distancing myself from Apple, I still follow some Apple-centric news sites like Cult of Mac. As with any large site, the quality of writing varies, but for the most part the Apple fanboy rants are kept to a minimum. For the most part.

Recently I saw this article complaining about a Samsung ad. 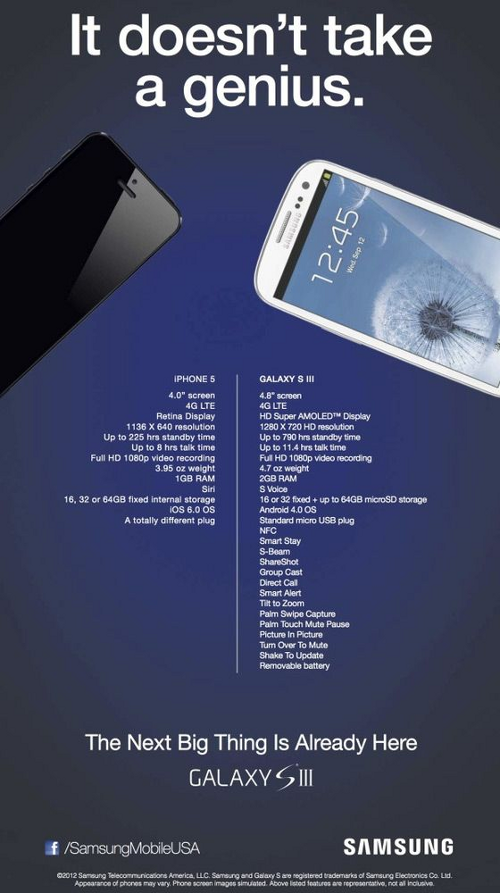 I own a Galaxy S3 so I was interested in how it compares to the new iPhone. I find the S3 to be incredibly light, so I was surprised to see the iPhone 5 is even lighter, but with that exception the S3 meets or exceeds the iPhone’s specifications.

Now the fanboy was ridiculing the rest of the ad for mentioning other features like “S-Beam” and “Picture in Picture”. Well, sorry to say, that’s what advertising is for – to increase consumer awareness – just like no one knew what Siri was until Apple told people. The sad fact is that the iPhone is a fashion accessory as much as a device (notice how case manufacturers now cut out a circle in the case so they can display the Apple logo?) and it will be hard for anyone to complete against that – until the fashion fades. I think that is the most telling thing about the iPhone 5 announcement – there’s nothing really new here. Unless Apple continues to innovate, the door is open.

And I’m with Brian when I think that Microsoft still has a shot at the market. I’ve seen some of their new tech, and the integration of Windows and Office across phones and tablets with centralized storage is huge. Apple is still having trouble getting into the corporation, and if Microsoft can deliver tools that let people work with Excel, Powerpoint and Word more efficiently, that will be more important than Angry Birds and Youtube.

Anyway, I do agree with the Cult of Mac guy that Samsung could have done a better job in their ad. Since I run CyanogenMod I don’t use any of their fancy software (seriously, Samsung, I can’t remove the Yellow Pages widget ’cause it is an important system file?) I would have focused the ad on the things that really differentiate the S3 from the iPhone: removable microSD storage, removable battery, NFC and the microUSB plug.

The thing I dislike most about Apple is that they really want that “walled garden” so that anything going onto or out of your device has to go through them. Removable storage would make it easier to circumvent that, but would erode their margins on memory. With 64GB microSD cards becoming common and 32GB cards being downright cheap, it would be difficult to charge an extra $200 for 64GB (versus the $55 I paid for a 64GB microSD card) if options were available. Plus, the removable storage is the best way for me to manage O/S upgrades and media on my phone, and I can’t see how I lived without it.

Also, don’t underestimate the value of a removable/replaceable battery. A lot of OpenNMS customers are financial institutions that severely limit network access. When I am on-site at one of those places, I rely heavily on my phone, and quite frequently my iPhone would run out of juice by the afternoon (and the iPhone 4 had good battery life). My only option was to plug it in. Not a big deal, but now I just swap in a spare battery and get on with my life.

One would think that Apple would be embracing new tech like NFC. With Square raising another $200 million, the interest in mobile payments is huge. Now granted, it may take an Apple to make NFC payments ubiquitous, but the lack of NFC in the last two iPhones means that there is a opportunity to pass them by.

And finally, while it may seem silly, I love the fact that the S3 charges off of a microUSB cable. It’s called a “standard” and it is one that every other device maker on the planet is moving toward (despite another Cult of Mac fanboy rant about Samsung cables in the past) and I can always find one – be it for my Kindle, my bluetooth headset or my digital camera.

While it has been a frustrating experience switching from an iPhone to Android, at the moment I could not see myself going back. The user experience is totally different and the culture is much more about creating than consuming.

I have a choice, and that is the best feature out there.