I really like visiting the state of Oregon, from Portland all the way down to Roseburg. While I haven’t been to the eastern side, the western side is beautiful, and there is also a lot of OpenNMS history there. The City of Portland uses OpenNMS, as does Earthlink Business Solutions (currently across the river in Vancouver, WA, but with a data center in Portland). Ken Eshelby, who works for the State of Oregon, has one of the most amazing installations of OpenNMS I’ve ever seen (he takes my definition of OpenNMS as a platform very seriously).

But my heart always resides with Oregon State University down in Corvallis. When I first started out on my own back in 2002, OSU was the second organization to purchase a Greenlight project. They’ve been using it for ten years, and last week they invited me back to do a “Tune My OpenNMS” project in order to get them on the latest version and to show them ways to maximize how they are using the tool.

The “Tune My OpenNMS” project (once called “Pimp My OpenNMS” but we had a client warn that he could never submit a purchase request with the word “pimp” in it) is three days long, so I decided to come in a day early to visit friends down in the Peoples Republic of Eugene. Sunday we sat outside drinking microbrews and feasting on salmon caught off the coast, and on Monday I got to go hiking in the Tamolitch Valley.

The area has both old and new growth forests, and there are some pretty extensive lava flows. Here’s a picture of my friend Kate where you can see the lava starting to be overgrown with brush. 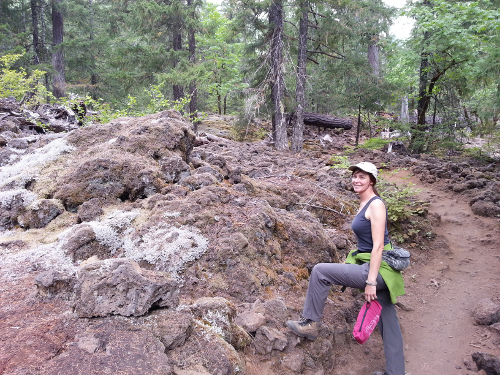 The path we took followed the McKenzie River, which made me wish I had brought along my waders and fly rod, but since I didn’t I had to content myself with just pointing out those places where the monster trout would live.

Our destination was a place called The Blue Pool. This is a small pool that contains (so I learned) a lot of dissolved silica. While it shows up as white on the tree trunks and rocks downstream, in the still water of the pool it shows up as an incredibly rich blue (as it scatters blue light). There were once falls on one side of the pool but a lava flow covered them up. There is still water flowing under the rock and it comes out under the water, so they call it a “dry” falls. 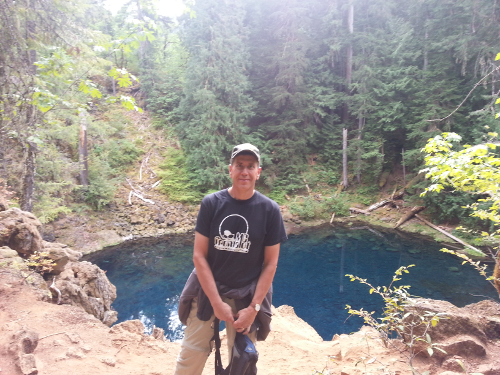 I said goodbye and headed up to Corvallis Monday night. On Tuesday I met with Joel Burks at OSU and we got down to business migrating their existing 1.6.7 install to 1.10.5. For lunch we met Bill Ayres (OGP) who was one of the leaders of the OSU OpenNMS project until he retired, and the three of us had a lot of fun.

One night we drove out to Newport to eat seafood at Local Ocean. It was amazing. 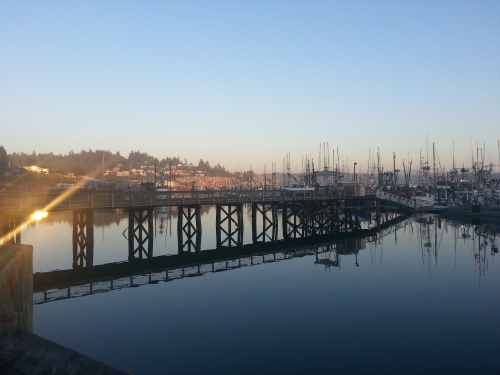 I also got to see the controversial mural located downtown that illustrates atrocities committed by Chinese soldiers against Tibetan monks.

I thought it was quite the coincidence that I was in Corvallis when a news story broke that wasn’t about OSU athletic scores.

I didn’t get a paper accepted at OSCON this year so this was my only trip to the area, and I had missed it. I hope to return soon.