Okay, I really wasn’t going to blog about this part of the trip, but it did turn into something of an adventure, so why not?

I got a notice Friday night that, due to weather in Chicago, there would be a crew delay for flights out of PDX the next morning. Since that put me on a pretty tight connection time through DFW, I called and got myself on an earlier flight. That one, too, was delayed, but it was then scheduled to leave about the time of my original flight (if it had left on time) so everything was cool.

I took the MAX to the airport, checked my bag, got put on the waiting list for an upgrade and I went to the gate.

I’m sitting there reading when I look up and there is Jesse Vincent staring at the upgrade list. I said “hi” and he looked at me, then back at the list and then said that it was rare that he wasn’t number one for upgrades. It turns out that his name was second, behind mine. Then Kevin Falcone shows up (also from Best Practical) and his is the third name on the list. 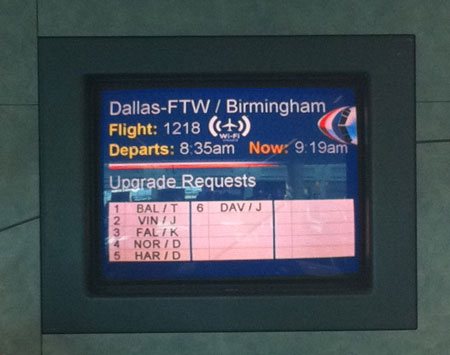 Anyway, so I didn’t know that another thing Jesse and I had in common was an interest in collecting frequent flyer miles and air travel in general. He’s way more of a geek at it than me – in fact he has an active Sabre account so that he has access to the same information as travel agents. 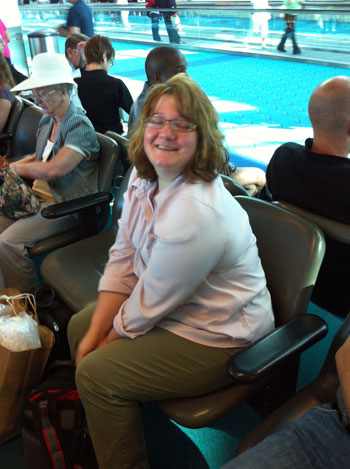 While we are sitting there, Amber Graner shows up (it was like a little OSCON). She was on her way to DFW and then Charlotte, but then had to stay one more night in a hotel since her husband’s flight from Europe was delayed until Sunday (they were to meet up and drive home together). 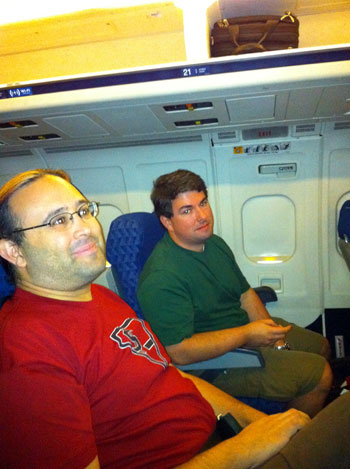 I had pity on the person who was to sit in 21E, since I figured Jesse and I would be talking across them the whole way, but we behaved (I got caught up on Burn Notice and watched two episodes of Dollhouse).

When we made it to Dallas, Kevin and Jesse’s original flight to Boston was backing out of the gate, so they had some time until the next one. We hit the Admiral’s Club and had some lunch, and then they took off. My own flight to Minneapolis was still an hour or so away, so I made some calls and caught up on e-mail.

As I was leaving, I noticed a couple sitting nearby traveling with two small dogs. I like dogs so I couldn’t stop myself from talking to them (yeah, yeah – I know). It turns out that they were originally from West Virginia (I spent some time in WV back in 1986) but now lived in Los Angeles, and that they traveled about as much as I do. There names were Scott and Kristan, and they had met while in WV, gotten married and now were both working in television. Since Kristan had “model” good looks I asked her if she was someone famous that I should know. 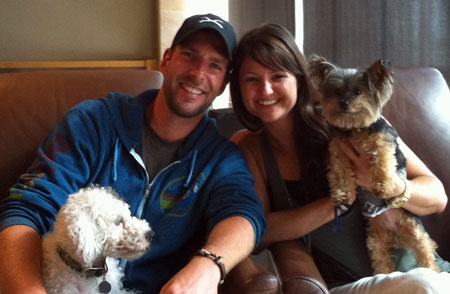 They both laughed and said, well, maybe. Kristan had worked with Rachel Ray for several years and she is a host of the HGTV show “Design on a Dime“. Since I only have “over the air” television (no cable or satellite) I could plead ignorance at least, but I must say that they were both incredibly easy to talk to, so much so that I had to run to catch my plane.

The rest of the trip was uneventful. I watched two more episodes of Dollhouse (three more to go) and while the plane was a little late as they had to route around some thunderstorms, both myself and Alex landed pretty much at the same time. Mike Huot met us at the airport and we headed toward UMN and Dev-Jam.