The last full day of the conference started off kind of busy for me. I had a number of work things to do (the business doesn’t stop just ’cause I’m at a conference) and I didn’t make it to the convention center until 10am. I ran in order to catch r0ml’s talk where he was going to propose that all software should be in the public domain and that licenses (even OSI approved licenses) indicated failure.

Turns out that session wasn’t until 10:40am, so I decided to wander around the show floor until then. I ran into a couple of people I knew and told them I’d missed the keynotes, to which the reply was “no, you didn’t” so I guess they didn’t go over all that well.

As I was wandering, I met Brian Reale who had come to my talk the day before. He manages ProcessMaker, an open source business process management and workflow tool. We were chatting about running a services company around open source when I realized it was right at 10:40 and I had to run to the session.

As I got close to the room I met Karen and Bradley coming the other way. Apparently the room was so packed that they had to stop letting people in due to fire safety regulations. Grrrr. So r0ml, if you are reading this, you are wrong.

[Note: we watched one geek walk up, be told by the dude at the door that the session was full, and he just shouldered passed him to go in anyway. The door dude just stood there, and we realized why when the geek found the door to be locked. Classic]

We ended up talking awhile in the hallway, and Tom “Spot” Callaway joined us. I haven’t been involved in TriLUG for awhile and so I had not seen him, or even realized he had moved to Boston, so it was nice to catch up. I then wandered back to the Expo.

I was able to finally meet Adam Monsen, who showed up in a blue OpenNMS polo. He also had a nice little gift for me for talking with him a few weeks ago.

I’ve learned if you ever need a conversation starter at a geek show, walk around with a bottle of single malt under your arm. You’ll meet a lot of people.

Adam and I continued our discussion over lunch, and they he had to get back to work promoting Mifos. Eric and I decided to walk around some more when I bumped into Brian Aker.

I follow Brian’s blog, and for the last several months I’ve seen him working on this large monorail project. Since he just tends to post pictures, I never understood what it was for, so I got to ask him. It turns out that he is building a 500 foot long monorail to be deployed at the Burning Man festival next year. I’ve never been (for years I’ve been spending Labor Day up in the North Carolina mountains) but some friends of mine haven’t missed it for over a decade and so from their stories I’ve always wanted to go. It would be cool to see it in action.

I also got to meet Aaron Williamson of the SFLC. He is the resident free software on Android guru, and we chatted about free software (free as in freedom) as well as the fact that Android isn’t 100% free (he told me there are three pieces of proprietary driver code on his G1).

Continuing that theme, I did actually make it to a session when I went to see Jesse Vincent’s K-9 e-mail client talk. Everyone I asked about FOSS on the Android mentioned his mail program, so it was cool to listen to its history and to learn how Android has evolved to be a lot more open to the open source development style over the years.

After that I went back to the hotel room to drop off some things before heading out to dinner. OpenNMS is heavily used in Oregon, from OSU to Clackamas County, the state of Oregon and even the City of Portland. My friend Stan, who I met at an OpenNMS training session earlier this year, came with his wife Jane to take me out to dinner.

In continuing the McMenamins theme started on Monday, we drove out to Edgefield. 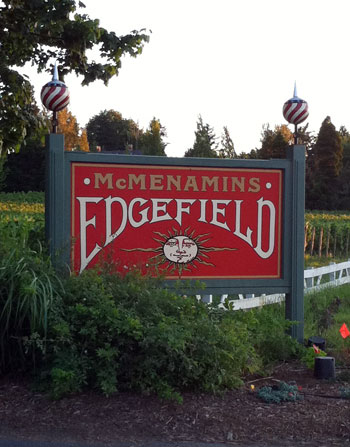 Edgefield was once a “poor farm“. From Wikipedia:

Poor farms were county or town-run residences where paupers (mainly elderly and disabled people) were supported at public expense. They were common in the United States beginning in the middle of the 19th century and declined in use after the Social Security Act took effect in 1935 with most disappearing completely by about 1950.

Most were working farms that produced at least some of the produce, grain, and livestock they consumed. Residents were expected to provide labor to the extent that their health would allow, both in the fields and in providing housekeeping and care for other residents. Rules were strict and accommodations minimal.

It is now a complex that includes restaurants, bars, a hotel, a spa and a golf course, among other things. We shared a nice meal (where I sampled their artisan made gin) and then walked around the grounds for a bit. In the background you could hear a bluegrass band that was playing a free concert to a rather large crowd in one of the side fields.

They then drove me back into Portland and dropped me a Club Barracuda, where Rackspace, Linux Fund, iX Systems and MindTouch were hosting a party. It started off a little slow but then began to fill up. I ran into Eric again (Rackspace hosted a hiring “meet and greet” beforehand and I believe he was required to attend) as well as Stephen Walli, but I also got to spend some time with Ilan Rabinovich and Amber Graner (Amber is a fellow North Carolinian). While we were talking, a man named Roger came up to chat and it turns out he works with Stan at the City. Talk about a small world. 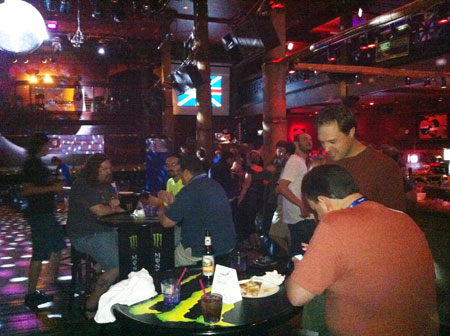 A little after 11pm we decided to head back. While waiting for the train I looked over an saw a man in a MariaDB shirt. I thought it might be Monty Widenius, so I looked up his picture on Google and sure enough, it was him. I walked over and introduced myself.

While we were talking I met Jeff Mitchell of KDE. He knew our very own Ben Reed and as we walked back to the hotel he was hoping Ben could find the time to update his Mac packages for Amarok. Ben ported KDE natively to the Mac when TrollTech opened up Qt awhile back, so Ben, if you are reading this, Jeff says “hi”.

There is still a half day of show left (I doubt I’ll make it there on Friday) but overall I had a good time. I was surprised that Sourceforge didn’t do its Community Choice Awards this year (not that OpenNMS would win anyway) but other than that I enjoyed it.

It was really nice to see (at least among my biased, self-filtered list of contacts) the growing backlash against open core calling itself open source or at least a much larger group of people who cared about the difference.