Brad, Barry and myself piled into the Wagon of Wootness around 9am and headed off toward Spartanburg for the SouthEast LinuxFest. A little less than four hours later we pulled into the Marriott and started to unload the van.

The first order of business was setting up the booth. This is the first conference we’ve been able to sponsor, and it’s pretty cool to have a whole ballroom named after our project. 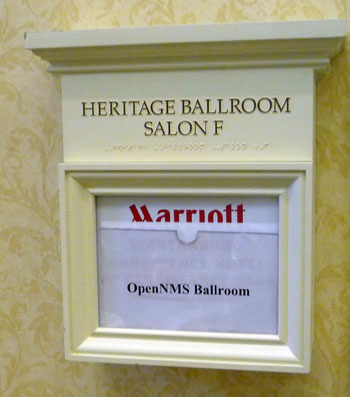 After the booth was done had a little downtime and I spent much of it chatting by phone with Adam Monsen of the Mifos project. He is interested in building a larger community around his project and wanted to hear some of the stories about how the OpenNMS community works. It was a lot of fun (I always welcome the opportunity to run my mouth) and I hope Adam got some useful information from it.

By now it was 6pm and I was invited to a speaker’s dinner. Along the way I ran into Jon “Maddog” Hall. We are both fans of an organization called Inveneo, and while we had exchanged e-mails this was the first time I had met him in person. At dinner we sat with Russell and David from Digium as well as Keith from the OpenInventionNetwork.

After the dinner there was a SELF pre-party. In typical geek fashion there was music, a bar and the largest game of Apples to Apples I’ve ever seen. When it started to wind down we headed back to the room. 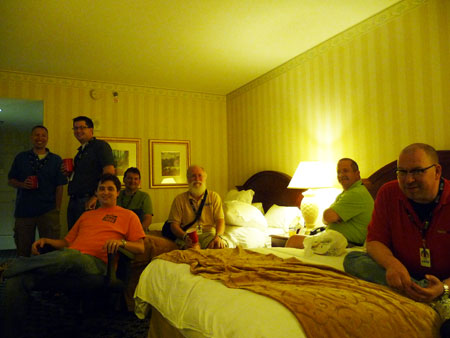 Now I don’t know if it was the fact that we drove to the conference versus flying, but it turns out that a number of us had brought along some libations: I had a nice single malt, Barry had a bottle of rye, etc. So we ended up in the room chatting until past midnight about computers, open source, music, etc. It was nice. It reminded me of a post by Brian Aker on conferences in which the best part tends to happen outside of the presentation rooms. Based on that, SELF should be a lot of fun.