I hope my three readers will accept my apologies for not blogging much lately. Things have been crazy busy around here as there has been a rather large upsurge in interest about OpenNMS and our services and it has kept me on my toes.

Oh, yes, when we last left our intrepid open source hero he was at the SouthEast LinuxFest, partaking of various libations with friends, new and old. So I guess I should start talking about the show itself.

The first keynote was on Saturday at 8am. If there was one complaint I could make about SELF is that they really tried to cram a lot into the weekend. Early starts on both days (not good for geeks) plus something like five tracks along with an Ubuntu conference and a Drupal conference. Starting a conference at 8am on a Saturday is pretty odd, and the speaker, Ubuntu’s Jono Bacon, remarked on it. 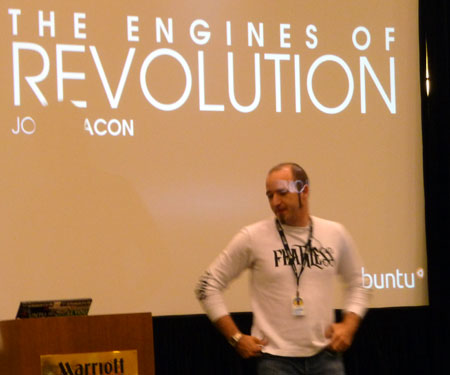 Jono gave a great talk as usual. I especially liked his introduction where he explored the whole conference-speaking process. One quite often has to submit a presentation topic several months in advance. Rarely are the ideas behind the presentation fully formed at that time, and they are subject to change. Thus one tends to submit a fairly vague, but it is hoped interesting, presentation idea to the conference committee. If it is rejected, no harm no foul, since you really haven’t spent that much time on it. However, if it gets accepted, you tend to forget about it and end up writing the thing on the plane flight to the conference.

This isn’t exactly true, but there are enough nuggets of truth in it to make it funny.

After the talk I got to meet Jeremy Foshee, a fellow North Carolinian and an Ubuntu kernel guy. He’s very funny, and he showed up with a Kevin Bacon T-shirt on where he had marked out “Kevin” and replaced it with “Jono”.

We then set up the OpenNMS booth and had a pretty high level of traffic throughout the day. 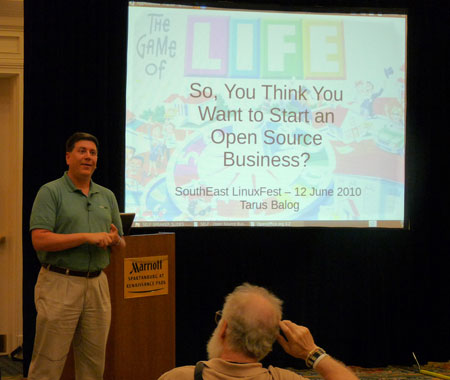 My first talk was at 1pm and I gave an updated version of my starting an open source business presentation. It was pretty well attended and I think it went well, and I got quite a few positive comments and questions afterward.

Then I worked the booth until 4pm, when I participated in an open source management tool roundtable. Moderated by Jon “Maddog” Hall, it featured Matt Ray from Zenoss, Tara Spalding from GWOS, and yours truly.

Now, I’ve always wanted a platform where I could really sock it to these “open core” vendors and emphasize the huge advantage OpenNMS offers by being truly open source software. Unfortunately, this wasn’t the place.

First off, I like Matt Ray a lot, and while I have only met Tara twice she seems nice enough. It would be hard to really tear into their companies’ horrible bait and switch practices without seeming to attack them personally, which I really didn’t want to do.

Second, the roundtable was rather sparsely attended and I could tell that the audience wasn’t there to hear me pontificate on open source vs. open core.

And finally, one of the first questions came from one of the SELF organizers who was also a Zen Master (a recognition program that Zenoss modeled loosely on our own Order of the Green Polo). The last thing I would want to do is come across as both insulting a host and making fun of this guy’s commitment to his project.

Look, I’m glad that these companies are producing open source software, I just get upset when they tout themselves as open source companies when in fact their business model is almost entirely based on selling commercial software licenses (some with rather onerous terms). But I am also a big fan of “if it works and you can afford it, use it”.

If their was one group of people I could reach it would be any organization interested in buying one of these commercial “open core” software companies. When figuring up a value for them don’t forget me. I am dedicated to delivering the best features of these companies as truly free and open source software. While I don’t have millions to make it happen overnight, running a profitable company means I have time on my side, and eventually the value of what you are planning to buy is going to be reduced to zero if the plan is to make money selling commercial software.

But I didn’t say any of that.

Instead I decided to accentuate the positive and focus on the benefits of OpenNMS: its power, flexibility, scalability, the fact that its been around for over a decade and, yes, the fact that it is 100% free software.

Thus the panel was a pleasant, if a bit dull, way to spend a hour, and I hope the few people who showed up got something out of it.

This was the last presentation of the day, but there were a number of “birds of a feather” sessions held later that night. I was particularly interested in one Maddog was doing on Project Cauã.

Project Cauã is an extremely ambitious project to address many issues, especially a number of those that are plaguing the developing world. It aims to combine open source software and hardware to deliver a number of services that are often done separately, such as television, internet, phone, home automation and security. By utilizing thin clients coupled with server farms, the idea is to save on energy costs. It also aims to address unemployment, by training people to manage deployments of this hardware and software in a profitable manner, backed by a franchise-like organizational structure than can deliver the whole solution in a turn-key fashion. So deliver more services, decrease energy use, increase employment and create profit in the process – didn’t I say it was ambitious?

I am also not doing the whole thing justice, so be sure to check out the site and to go and see Maddog speak if you are at a conference where he is talking about the project.

After his BoF came the good part – more socializing. Since I was scheduled to speak on Sunday, I tried to make it an early night, and somewhat succeeded.

My talk on Sunday started at 9am, and I experienced something I never had before: a totally empty auditorium. Seriously, at 9am there was nobody there. Talk about a blow to one’s ego. However, mine wasn’t the only empty room and by 9:15 we had about 20 or 30 people show up to hear about OpenNMS.

This was a new talk, and I think it went pretty well. In our training classes we tend to spend the entire first day talking about the features of OpenNMS, so it was hard to cram all of them into two hours, but I focused on the four main areas of the application (provisioning, event management, service assurance and data collection) and illustrated each one with an example.

When that was over I went back to the booth, but the traffic dropped down dramatically over Saturday. Since it was a long drive back home, we decided to tear down about 3pm and head out.

All in all it was a good show. I met some new friends and reconnected with some old ones. The only advice I would give is to scale it back next year, start a little later and have fewer tracks.

As for upcoming events, I’ll be in OSCON in July followed by our annual Developer’s Conference, Dev-Jam. There is still time to register if you are interested in attending, and hope I get to see you there.