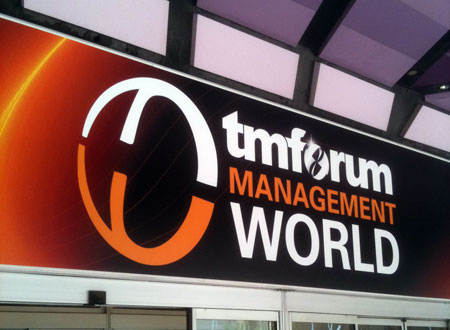 The reason I’m in Nice this week is to attend the Telemanagement Forum’s annual Management World conference. Dr. Craig Gallen has been leading the OpenNMS involvement with this organization for many years now, and we have been trying to introduce open source development concepts into the highest levels of telecom carriers and those companies that support them. 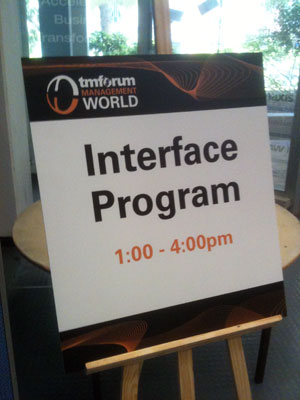 Most of that effort has gone into the TMForum’s Interface Program (TIP). The goal of TIP is to create permissively licensed open source code to implement the interfaces defined in the NGOSS specification. On our first day at the conference (Monday) there was a long status meeting that we attended. Well, I left after the first hour and a half. I now have a greater appreciation for the work Craig is doing. (grin)

Today, the main part of the conference officially started. This is a serious conference – lots of people in suits (including me) and a very high level of execution. A tremendous amount of money goes into the signs, banners, food, etc., that I don’t see at any other show.

Today is also when they announce the winners of the TMForum Excellence Awards. The OpenNMS Group was nominated in the “Leadership” category but we didn’t make the finalist cut. However, we were also involved in a project lead by the BT Group that was a finalist in the “Innovation” category.

We didn’t win that either – although it was announced as if we did. The confusion arose because the BT group had two catalysts in the show, and the executive who accepted the award mentioned the Cloud Service Broker. Oh well.

We spent most of the day on the third level in “Forumville”. It is a tradition at TMForum events for members to showcase proofs of concept. Called “catalysts,” they range from mockups to systems that are nearly production ready.

We were involved in a catalyst called the “Cloud Services Broker”. 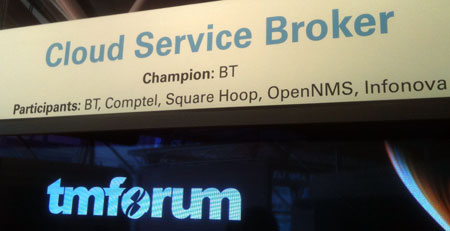 A “broker” is usually someone that facilitates an exchange of goods or services. For example, in the US most people receive health insurance from their employers. Those that work for The OpenNMS Group are no different. Rather than search out all possible options and trying to determine the best fit, I contacted a broker who then examined our needs and matched us with a insurance company. When that company raised their rates a few years later, she worked to find us alternatives.

What BT aims to do is to act as a broker for cloud services. They would make the ordering process easy and then match a client’s needs to the best vendor. Should situations change in the future, they could facilitate a change of service or a switch to another vendor. They would also make it easy for ISVs to add their products to the ordering system.

Here is a diagram: 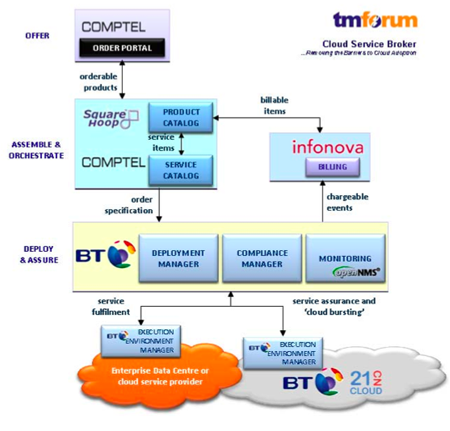 There were several companies involved in the solution. The assembly and lifecycle management of cloud products is performed by Square Hoop, while technical assembly is delivered by Comptel. Comptel also provided the portal by which cloud products are ordered. BT provides trusted deployment of the solution to the right cloud service providers, and assures that all governance requirements are met. Infonova provides management charging models (billing), while OpenNMS delivers the monitoring function.

One of the scenarios demonstrated in the catalyst was the ability to dynamically allocate extra compute resources in a “burst” fashion. In this example, a web site that takes orders for computer parts desires a service level of less than 1 second for the website to respond to requests.

They have a couple of servers running their commerce application, fronted by a load balancing device.

When this system was provisioned, messages were sent to OpenNMS to automatically monitor this service and to put certain service-related thresholds in place.

When the number of visitors to the website is increased, OpenNMS detects that it is now taking longer than one second to respond to queries. Since this is to be expected from time to time, no action is taken until this condition persists for several minutes.

At that point a message is sent from OpenNMS to BT’s system, which then automatically allocates more servers and notifies the load balancer to start sending traffic to the new resources. This results in a decrease in response times to well within acceptable limits.

Here’s Craig demonstrating this at the show: 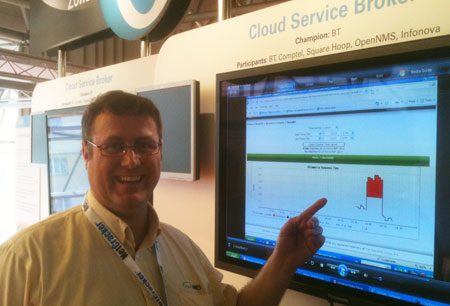 OpenNMS, designed as a network management application platform, was the perfect choice since there were a number of integration points to allow BT to both add, delete and change what is being monitored as well as to receive important information back from the system with a minimum of integration effort. The OpenNMS code was not changed for this demonstration.

The best part of the whole thing is that the solution is close to production ready. Craig and I were chatting about this, and we thought wouldn’t it be cool if BT were able to offer OpenNMS as a brokered solution? Since BT owns the network that these customers use, they could spin up a VM, load it with OpenNMS, then open a VPN to the customer’s network. Throw in auto-discovery and a client could have a management solution up and running in less than an hour.

The idea of being able to make the purchase and deployment of cloud services easier for both end users and those that supply the services is pretty innovative, and I think BT has a real opportunity here.