It’s interesting to spend a lot of time away from home, especially in foreign countries, since the change in scenery and language can definitely get the creative juices flowing.

I’m writing this from France (I had forgotten that a) people smoke a lot here and b) people really like to have dogs, which makes walking down the street an adventure) where, since I happened to have Internet access, feels in many ways like home but in very large and important ways is not.

This weekend I was trying to catch up on e-mails and one involved filling out a long survey. One of the questions was “What advice would you give open source projects just getting started?” to which I answered they should run out and read a copy of REWORK. 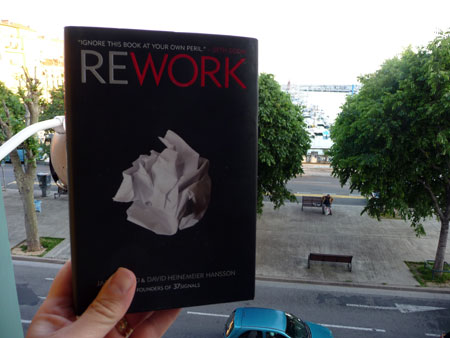 REWORK is great, because if I were to write a book on business, that is the book I would write. Since I have so little free time as it is, I am happy someone else wrote it for me. (grin)

It is written by Jason Fried and David Hannemeier Hansson of 37signals. While 37signals is not an open source company, they did sponsor the development of the Ruby on Rails framework, which is used to make their own web applications as well as those of countless other projects. But they are a software company that started with little investment but a whole lot of talent and energy, and thus they parallel a lot of open source projects.

Even though it clocks in at nearly 300 pages, REWORK reads quickly. It consists of several short ideas about business as experienced by the 37signals team, and most of them are spot on. It is a book that screams to be read in the bathroom. Each point is presented in little chunks, most not more than a page or two in length, and reading it over time in the bathroom will let each one sink in between readings (all puns intentional).

One thing I don’t do that REWORK suggests I should is work less. I probably put in 60+ hour weeks with OpenNMS. Sometimes this is out of necessity but most of the time it is that the business occupies a good portion of my thoughts. Plus we now have customers all over the world and it helps to be able to answer their questions either early in the morning or late at night.

I also think that they don’t talk enough about having excellent people working with you. They do emphasize the beauty of remaining small, but I have never worked with a better team than the OpenNMS gang and that is really important. If you want to manage a geographically remote, self directed team they have to be great people. They have to really want to be doing the work that needs to be done.

The OpenNMS Group is growing during this economic downturn, so I am often asked by people for a job. My reply is to get involved with the project, show me what you can do, close a few bugs and demonstrate that you have what it takes. Rarely, if ever, does that happen, and I know that I’ve dodged another hiring bullet. The people I hire want to be there for more than just a job.

I did love the research on failure in the book. One of the reasons I dislike the venture capital community is that it seems to be made up of a small group of gamblers who have made a lot of money for themselves, and a large group of sycophants that hope to make a lot of money. This group seems to thrive on failure.

For example, I worked for one company that after I left hired a certain person as CEO. This was a pretty close knit team of 40+ people, but not only was he an outsider, he didn’t even relocate to be near the business. In less than a year he drove the company down to less than 10 people, and when the board fired him the most enthusiasm he ever showed was in his weekly calls to make sure his severance was getting paid (he left the company much weaker than when he found it and cash flow was a problem).

So imagine my surprise when the same guy gets the top job at another company where I used to work. He obviously had an “in” with various investors, and the explanation I was given was “now that he’s a failure, he’ll know how to do better this time”.

This is a myth. REWORK quotes a study showing that people who lead companies that fail have the same success rate on their next company as those without any experience at all.

And now for a digression that I promise I’ll tie back together eventually.

On this trip I became aware of the Diaspora project to provide an open Facebook replacement. I didn’t read any of the stories completely due to travel, so I actually set aside time on Saturday to close my Facebook account and switch.

I actually like Facebook (we have an OpenNMS page), but lately having to opt out of all of the information sharing they want to do has become painful. The financial value of Facebook is in all the information about you that they have, yet they can’t monetize it unless it can be sold. Thus they want to share as much of your private information as they can get away with. I wouldn’t have as much of a problem with this if this had been stated upfront, but it feels a little like a bait and switch now.

I only connect via Facebook with old and dear friends. Almost all of them I’ve known since high school, and I use it to air out random thoughts, to make rude jokes, and to feel a sense of connectedness when I’m away from home. I never post anything online that I wouldn’t say in public, but the stuff I post on Facebook is usually something I’d rather keep amongst a small group, versus, say, my favorite public social network LinkedIn.

So imagine my disappointment when I found out the the Diaspora project didn’t really exist. My guess is that it will fail to unseat Facebook.

Please, before any of my three readers gets all upset and figures out how to use the comments section of this blog, I don’t want them to fail, but now the expectation has been set so high that they won’t be able to pull it off. In order to compete with Facebook, they’ll have to quickly get up to a large number of registered users, but operating on scale is hard. It took OpenNMS years to iron out the scalability issues we found with our software (and we are still looking for ways to improve it), but Diaspora will have to do it much more rapidly.

Facebook started out with a very limited deployment and slowly built up its application. Diaspora will have no such option. With such a bright spotlight on the project they will get mired down in trying to make the application perfect. No software can be made perfect, but now that important step of iterative growth will be removed. Heck, back in the 1.0 days OpenNMS used to actually die occasionally, much less monitor tens of thousands of devices, but our organic growth and obscurity let us fix those problems until is it extremely stable now.

And here’s the promised tie-in – Jason Fried summed the whole situation up nicely on his blog: they have too much money, the spotlight is on too early and expectations are too high.

He left off one thing that was mentioned in REWORK which was “Don’t Copy”. When you base your business or project on another’s work, you lose control. For example, all Facebook would have to do to stop a potential exodus over privacy would be to tighten the default privacy settings, or make it easy to “opt-out to all” by default. Probably less than a day’s worth of code and Diaspora can’t hit critical mass.

This does not mean I want them to fail – I would love an alternative to Facebook, especially an open one – but I have my doubts. This is one reason at OpenNMS we talk about things we’ve done, not what we are going to do.