I am writing this from the JAL lounge at the Frankfurt airport, waiting on my flight to London. It took awhile but I finally found that they have wired internet (RJ45s at certain seats) which is unusual but totally understandable. Good thing I aways carry a cable.

Yesterday was the second and final day of the OpenNMS Users Conference – Europe. While Day One was focused on the OpenNMS user community, the second was led by key members of the development team to focus on the application. 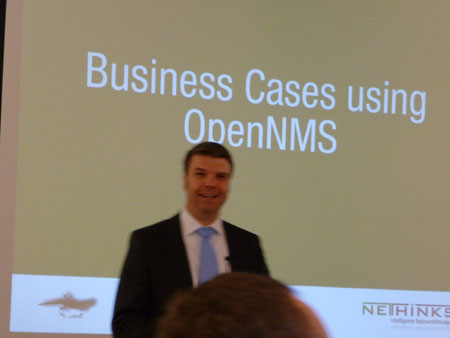 But before the workshops started we saw a keynote from Uwe Bergmann, the CEO of Nethinks, and how Nethinks is using OpenNMS to meet its clients’ needs. The OpenNMS Group and Nethinks have an interesting history. We got off on the wrong foot when one of our folks back in 2008 pointed me to an article on a German IT website about a product called MONET. MONET is based on OpenNMS, but includes integration with other open source tools. Unfortunately the article didn’t make any reference to this fact. This happened right when we were trying to deal with a company that was improperly using our code and I was hyper sensitive about it, and so I thought it had happened again.

This was not the case (MONET is distributed in accordance with the license) but since Nethinks had obviously seen the value that OpenNMS provides, it was the start of a good partnership. Nethinks sponsored last year’s conference and once again did most of the heavy lifting for this one.

Uwe discussed how OpenNMS was used to solve various problems that his clients experienced. Once the videos are online, it will be worth checking out.

After the initial talk, the conference broke into two tracks of workshops.

The first one I attended was Antonio Russo’s discussion of the new mapping features in OpenNMS. 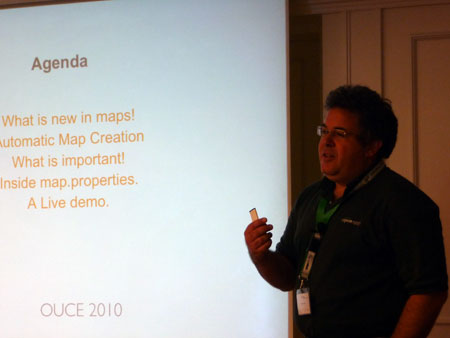 I have never liked maps, but certain users, usually management, almost require them. Being an open source project, I’m willing to entertain any new feature in OpenNMS as long as it is good, and maps are no exception. But after hearing about all of the new stuff in our maps, I actually got excited about them and can’t wait to play with them on our own system.

At the OpenNMS Group we have a very flat organizational structure. However, since we are growing so fast, I am spending more and more of my time doing company administration. For this trip I’ve turned it into a joke. For example, when I got us upgraded to business class I told Ben “see, this is for management”. If I misspoke about something related to OpenNMS and one of my guys corrected me, I’d just say “pardon me, I’m management”.

So when I left Antonio’s presentation and was going on and on about how I liked the new maps, Ben said, “Gee, you really are management”. 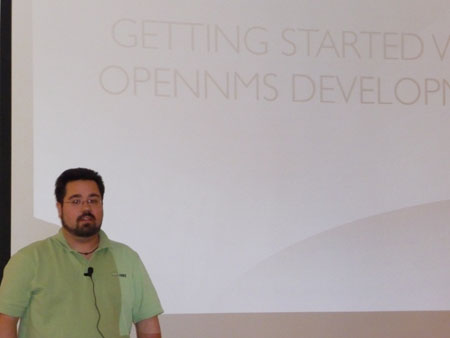 Speaking of Ben, his was the next talk I attended. I don’t write much code anymore, and some of the recent changes, such as the migration to git, are still new to me. Having spent most of my life with this idea that there was one and only one repository for a particular piece of code, the highly distributed nature of git is something I’m still getting my brain around, but I asked a lot of questions and things are clearer now. 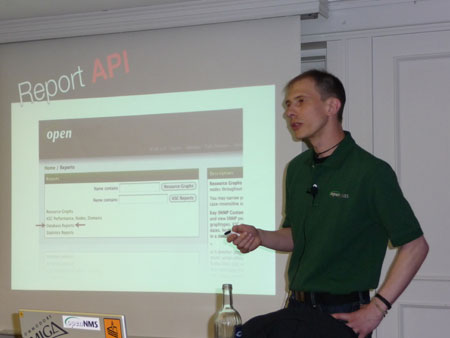 The final workshop of the day was Ronny Trommer’s presentation on the OpenNMS integration with JasperReports. As “management” this was also exciting to me, as now we can produce beautiful reports from any information that is available from the database.

We use the “community” edition of the Jasper server, and outside of flash and commercial support I am not sure what the “enterprise” version gets you, but it seems like the free version is pretty feature rich. The only thing that it doesn’t give us is the ability to import information from the RRD files but we’re planning on adding that and contributing it back to their project. 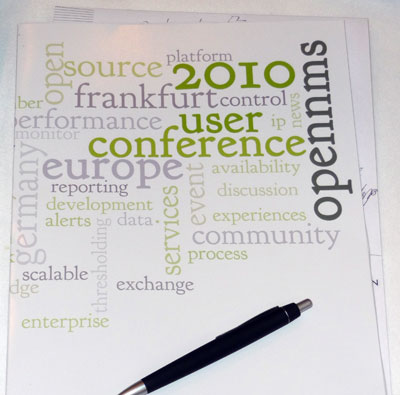 After the workshops were over it was like no one wanted to leave. We talked for at least an hour more, but then people started trickling out to catch trains, etc. A group of us who stayed around walked through the red light district to a Japanese steakhouse that was recommended for dinner. 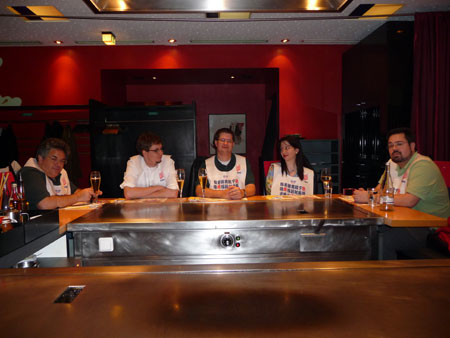 It was a great conference and everyone who came seemed to get a lot out of it.