When I started my first company in 2002, I had a lot of previous employers to provide examples, both positive and negative, of how to run a business. At the time IBM and Hewlett-Packard were leaders in network management, so I could have modeled my business on them.

Instead I modeled it on Ben and Jerry’s ice cream.

Many might think it was a strange choice, but it seems to have worked out well, at least for us.

First, they make a good product. This is of paramount importance in any business.

I am constantly disgusted by executive salaries these days. Being a previous employee of NORTEL, now in bankruptcy, I find it highly ironic that the executives responsible for driving the company into the ground received huge retention bonus to keep them from leaving. In a just world they would have had no where to go, and particularly they would not be financially rewarded for poor performance.

Steve Jobs, one of the most successful CEOs ever, takes home a salary of just $1.

Back to Ben and Jerry’s. The one other thing they did that I admired was to donate a certain percentage of pre-tax profits to charity.

I like donating to charity, but I find that I am most eager to give to those organizations that are a) small and b) concerned directly with something I care about. Thus each year I give to the EFF, the FSF and the SFLC, plus a number of local charities.

When the earthquake in Haiti happened, we were shocked and saddened like most of the world. I wanted to help, but I wasn’t sure how. Luckily, the opportunity came in a most unexpected way.

Matt and Jeff (along with Alex) were hanging out in the OpenNMS IRC channel (#opennms on freenode.net) when a man named Andris Bjornson joined and started asking questions about OpenNMS. It turns out that he works for an organization called Inveneo that supplies bandwidth in rural and under-served areas in the developing world. Haiti was the perfect example of a place that needed their services, since a lot of the relief effort is run by non-government organizations (NGOs), and they rely on communications in order to maximize the good they can do.

Haiti’s communications infrastructure, such as it was, was destroyed by the earthquake, and Inveneo is using wireless technology to provide a timely replacement. Of course they need some way to manage this infrastructure (as you can imagine, it is in high demand) and they chose OpenNMS. 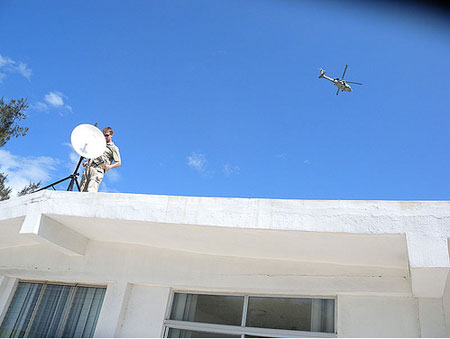 Andris has been using OpenNMS for awhile, but he had some questions and there were some issues in managing the radios they were using. The guys in the channel were more than happy to help out, but we wanted to be involved in a more formal way.

We decided to donate a commercial support contract to Inveneo to help them out in Haiti.

It’s pretty cool to be involved, at least in some small way, with getting Haiti back on its feet. It was also cool to have OpenNMS chosen from all possible apps out there to play a role.

You can read more about Inveneo and OpenNMS in this press release, and please consider donating to their efforts.

Open source has a large social component, and I have a theory that being involved in open source software makes one generally more interested in social issues. I want to hear from others about their experiences with social causes tied to open source. Jon “Maddog” Hall is also a fan of Inveneo, and I’d love to have more examples.

UPDATE: Here’s a network diagram of the Inveneo network, and the “How to Deploy” document mentions us by name.

One thought on “Open Source, Social Contracts and Running a Business”