When I got the mail yesterday there was a thick envelope from New Zealand. I opened it to find: 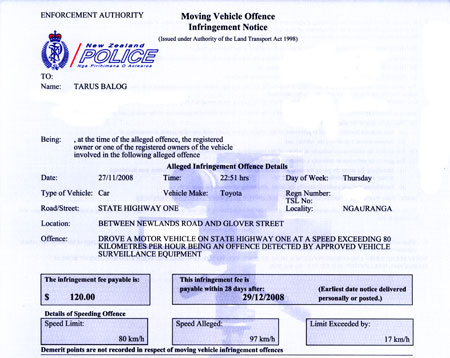 This was kind of funny. I’m an old guy and I rarely drive over the speed limit. I also haven’t had any kind of ticket in years, but in New Zealand not only did I get a speeding ticket, I also had to pay a NZ$12 parking fine.

New Zealand was the first time I ever drove a car on the left side of the road (well, I should clarify with “for any length of time” before Mr. Byron takes me to task again to point out that to drive in the US you sometimes have to drive a short distance on the other side of the road). It wasn’t that hard to get used to with the exception that my muscle memory kept trying to signal using the stalk on the left side of the wheel, which just turned on the windshield wipers.

But there were two things that tripped me up (and that the car hire agent never told me about). The first was parking signs. In New Zealand you’ll see these little white signs that say things like “P-30” or “P-120”. Those are parking signs where the number represents the minutes one can park in that particular area. Once I got the ticket I put two and two together.

The second thing is an unusual traffic rule. It appears that if you are in a city and a car wants to make a right turn (remember, this is the turn that crosses the on-coming lane of traffic), traffic going straight must yield.

I found out about this in Rotorua. I was making a left (I liked lefts) and I didn’t notice the car in the opposite lane wanting to make a right onto the same road. We both made the turn (I assume he thought I was going to yield since I was slowing down and probably running my wipers). Luckily there was no accident, and in the slim chance the person I did this to is reading this blog – mea culpa.

I find the whole speeding ticket thing funny for a couple of reasons. The first is the traffic camera watermark on the citation (tres cool), and the second is that we are in talks with a company that supplies these cameras to provide a monitoring solution based on OpenNMS.

In English measurements, I was cited for doing 10 mph over the speed limit of 50 mph. I’m pretty sure I remember where this was, since the only time I did speed in Wellington was trying to get around a car that was driving erratically. There doesn’t appear to be a choice for that excuse on the form, so I guess I’ll just pay the fine.

2 thoughts on “Present from New Zealand”