Working with OpenNMS brings me into contact with a lot of system and network admins, and I’ve noticed certain trends. For example, many have a penchant for high-end photographic equipment. It’s pretty easy to start a flamewar with this group just by asking “which is better, Canon or Nikon?”

Many also enjoy gaming. Video games, of course, are popular, but I’ve also come across pretty much every other type of game; from board games, to old-school table top role-playing to cards (I like bridge myself).

So I thought it might be cool to bring up a game I was introduced to recently. Back in November I took a vacation to New Zealand via Fiji, and in Fiji we played “Vidi Vidi” (pronounced “vindy vindy” or “vingy vingy” in the local dialect). 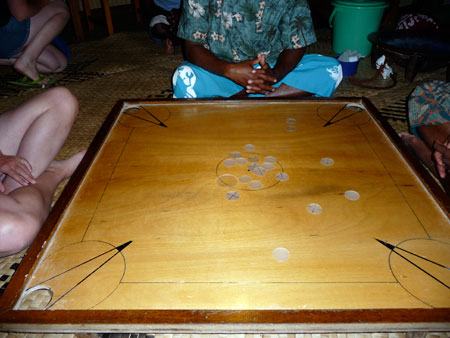 The game is similar to pool or billiards, but it is played on a square wooden board using little plastic disks instead of balls. One disk, the striker, is slightly larger than the others, and you “flick” it to strike the other disks in an attempt to sink one in the corner pockets (“vidi vidi” means “flick flick”).

It’s a lot of fun, and when I came back to the States I went looking for a board.

I didn’t find one, but I did figure out that Vidi Vidi is based on an Indian game called Carrom. Luckily, an importer of carrom boards is close to where I live, so over the holidays we bought our very own tournament-grade board (from his scratch-n-dent pile) complete with nice strikers and wooden carrom men (or “coins”). 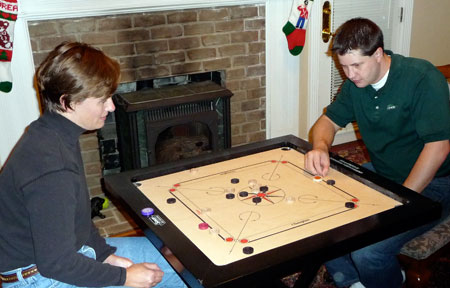 We’ve had a lot of fun with it so I thought I’d throw it out there in case others were interested. Or am I completely ignorant and this is just new to me?

2 thoughts on “The Games We Play”