When I first started my own business around OpenNMS, I figured it would be a one man consulting shop. I’d work about half time and then take the rest of the time off to do other things.

It didn’t work out that way.

My clients wanted support, and that meant someone (i.e. me) had to be around all the time. Instead of having some time to myself I had no time. This went on for a number of years. I can remember missing the funeral of my favorite uncle because I had a client coming to town for training and I couldn’t cancel at that late date. It was just the way it was.

As OpenNMS grew I was able to take some time off. I hired other people and so I could get away for the occasional long weekend. Or, more accurately, I was able to take weekends off now and then. We have traditionally closed the office from Christmas to New Year’s Day, but even then I tend to work part days during that time just to stay caught up.

Last year was the turning point. We got a client in Hawaii, so I had to head out there for a week. My wife insisted on coming along, and after talking about it with the other folks in the company I decided to take my first two week vacation in … well … pretty much forever. No e-mail, no phone calls, no meetings. Just some time to relax and regroove my brain.

It was fun, so we decided to do it again this year. Since I travel often I get lots of frequent flyer miles, and I had enough for a trip to New Zealand for two. I’ve always wanted to go there. However, the seats go fast so you have to book as early as possible, so I booked a flight for this November back in December of 2007.

When the airline was routing us to New Zealand, they had us stopping over in a place called Nadi. Now, I don’t have a problem going to “naughty” on holiday, but I’d never heard of it before and asked where it was. It turns out that this is the major international airport for Fiji. Fiji sounded cool, so we decided to spend a few days there before heading on to New Zealand.

So starting tomorrow I will be gone for two weeks. As much as I love working on OpenNMS I will not be checking my e-mail, or the lists, or bugzilla, or anything remotely related to work. I’ll be snorkeling on a coral reef or trout fishing in a mountain stream but it won’t have anything to do with the OpenNMS project.

I’m even leaving my laptop at home. This does not mean that I will be without electronic gear, however. I am bringing at least two small gadgets with me.

The first is a Garmin GPS. One thing I like about the Garmin is that it is supported by the New Zealand Open GPS Maps Project. Instead of shelling out US$150 for maps I’m using the work of this group. It was pretty easy to install, and the addresses I looked up for the B&B in Auckland and Zorb were both there. I’ll report on how it goes. While I seem to make it a habit to visit countries where they drive on the left side of the road, this will be the first time I’ve actually done it. I learned from my trip to Australia not to follow the traffic circle directions from the Garmin (as they have you going counter-clockwise in these countries which will get you killed).

The second is a new iPod Touch. While I disagree with the degree of control Apple exercises with the App Store, I haven’t seen a better mobile browser, and I just can’t stay away from the ‘net for that long. 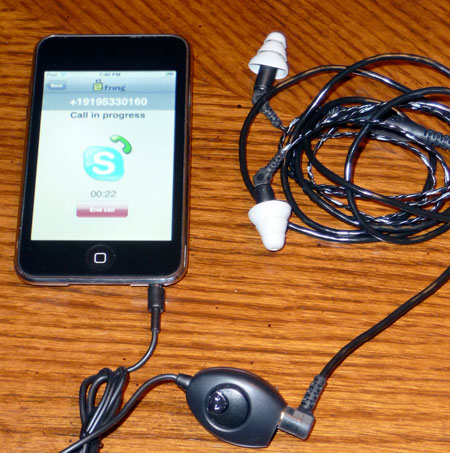 The best news is that the second generation Touch supports a microphone. I had been waiting and waiting for Apple to release its version, but with my trip just days away I went looking for other options.

I found it in a product from Fastmac. They sell an adapter that lets you insert a standard 3.5mm stereo headphone jack (with two rings) which terminates in a three ring connector that supports a built in microphone. Combined with Fring, a free app from the App Store that allows you to use Skype (among other things) I should be able to make Skype calls if need be. It arrived today and works fine, so I’m set.

To everyone in the community, hold down the fort while I’m gone. Try as I might, I won’t be able to keep my mind totally off the project, but I am going to give it my best shot.