Because of the train strike I rebooked our travel from the train to an airplane from Nice to Paris, and then we took a bus into the city. It dropped us off near the Arc de Triomphe. 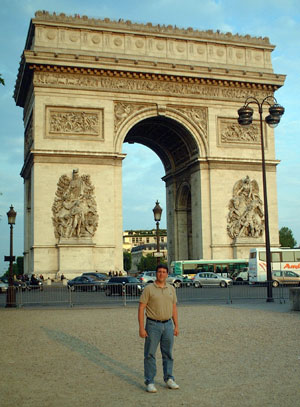 Me and the Arc de Triomphe

A friend of mine has a nice flat in Paris in a great location, so we decided to stay there instead of another hotel. It’s really refreshing to be in something that is more like a home than a hotel room, and we were even able to do some laundry. If you want to live like me, you can rent the same place if you are ever in Paris. Be sure to use the “friends and family” rate and say you know me from OpenNMS.

Today we woke up and took the Metro to La Défense, one of the main business centers in Paris. 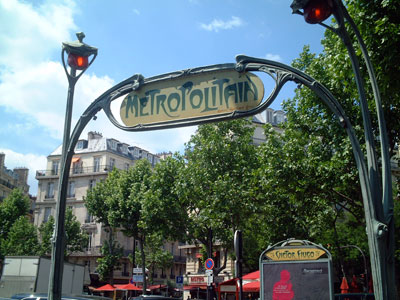 As we were waiting for the client to come and meet us in the lobby, I was looking through their annual report. They had revenues of 50 billion euros last year.

When we first started this OpenNMS thing, we thought that the people who would want to use our software would be smaller companies that couldn’t afford OpenView or Tivoli. It turns out it is the large companies that can’t afford them, and they are really drawn to the aspect of zero software licenses as well as the flexible framework that OpenNMS provides.

We’ve done work in France in the past, but this project will definitely increase our involvement in that country, and we hope to have some French-centric resources available soon.

After a nice lunch we returned to the apartment to do some e-mail before heading back on the Metro to Gare du Nord, one of the main train stations (and yes, every time I was on the subway Berlin’s “The Metro” was going through my head). From Gare du Nord we took the Eurostar train to London. 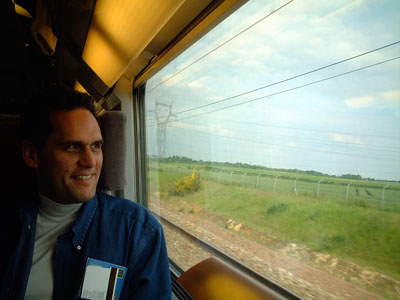 David looking out at the land speeding by.

This train will do 300 km/hour (about 186 mph) and the French landscape just flew by. We were going so fast that the longest trains we passed coming the other way were there and gone in less than 3 seconds. Tunnels bothered me, because I would feel some uncomfortable pressure in my ears every time we went through one due to air compression.

That part was pretty fun, but it took us 2.5 hours from arriving in London to make it to the hotel near Heathrow. I hate Heathrow, and I wish American would go back to Gatwick.

But that’s not gonna happen.

So tomorrow it’s back to the USA. I’ll post a little more over the holiday weekend. Have a great one.