I’m beginning to think that SCaLE is one of my favorite shows. It had a lot of the technical talent you’d expect from larger shows without a lot of the blatant commercialism.

I woke up this morning in a mad scramble to get my presentation slides done. I had never given this presentation before and on top of it I am trying to wean myself from Microsoft Office so I was using NeoOffice (OpenOffice) Impress which I wasn’t familiar with.

When I got to the room I was informed that the presentation was being both audio-taped and video-taped, and that I was going to have to use a microphone. Now those who have met me know I don’t need to use a microphone, and since I refused to stand still behind the podium I had to carry it around with me. I felt like a televangelist, which I guess in some ways, I am.

The room was pretty full, and there were a number of people out in the hallway. I can only assume they were trying to see what the fat man was yelling about. I actually managed to finish right on time, which was a miracle for me. The talks should be posted on the SCaLE website soon, so check it out if you are not faint of heart.

After the talk I ran into Zonker Brockmeier from Linux.com, and he asked me if I would do a five minute video with him talking about OpenNMS. I thought it was going to be along the lines of my FLOSS poscast, i.e. give and take, but Zonker put the camera on me and basically started rolling. He gave me a tip to look at him and not the camera, so of course I started goofing off. He threatened to use it (and later thought better of it) but he did send me a still. 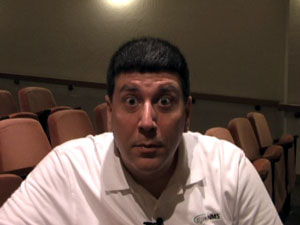 By this time I’m dead and it’s not even lunch. I managed to sneak away to In-N-Out and grab my signature Double Double, Animal Style, with Fries and a Strawberry Shake, to be followed by a bunch of Altoids so as not to offend those in the booth from the onions.

The rest of the day went on in a blur. About 5pm we torn down the booth and went to the bar.

Many thanks to Gareth and the whole crew at SCaLE for a fantastic show, and please invite us back next year.