First thing this morning a guy leading a small group came up to the booth and said “Sell me on OpenNMS!”

I wish I had said it, but it was David. The guy was obviously taken aback, so David explained that what he needed to do was tell us what he required from a management solution, and we’d tell him whether or not OpenNMS was a good fit.

I’d been looking for a good example of how dealing with OpenNMS was different from other products, and this hit the nail on the head. Other products say “Come on in! Look at me! See how pretty I am! Buy me!” (sorry for all the exclamation points but if you’ve ever been to a trade show you know what I mean). OpenNMS is about solutions, and thus the first step is always to determine the nature of the problem that needs to be solved. Until that is done, there is really nothing to sell. 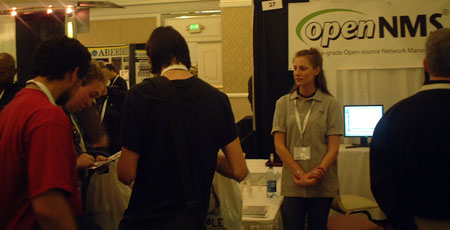 The first day at SCaLE flew by. We had steady booth traffic and I got to talk to a large number of cool people. The vibe here is much more along the lines of LISA versus, say, LinuxWorld, but without a lot of the “Why did you do it this way – defend yourself” that you get at the former conference.

By 5:30 I was really regretting having signed up for a Birds of a Feather session as I was wiped, but by 8pm I’d caught a second wind. We had about 20 or so people show up, and since the room didn’t have any A/V equipment (the projector had been removed promptly at the end of the last presentation) I just sat at the front and ran my mouth. OpenNMS is a fun story to tell, so I hope I didn’t bore the folks too much, and being tired I pretty much didn’t know when to stop. We met a couple of people who had been using the product and were really happy with it, and there were two guys from Doubleclick who had actually created a custom data collection plugin using OpenNMS 1.3. While they had little Java experience they were able to get it working, so I guess that’s a big compliment to Matt and his collectd rewrite.

Tomorrow I start off with my talk on OpenNMS case studies, and then I should be able to relax. I’m really looking forward to that.