Last week we hit a low of 11F at the farm. The lowest I’ve ever seen there was 8F, but the winter is not over yet, so it’s really nice to be sitting here in LA where the temperature is closer to 70F.

We’re at the Southern California Area Linux Expo (SCALE) where 1300 like-minded geeks and geekettes will be gathered together for two plus days of open source excitement. We have a booth in the heart of the expo floor, and there is a Birds of a Feather Session scheduled for tomorrow night where we hope to meet up with some of the OpenNMS faithful (old and new) to chat about what’s going on with the project, and on Sunday I’m giving a talk on OpenNMS and some cool case studies. 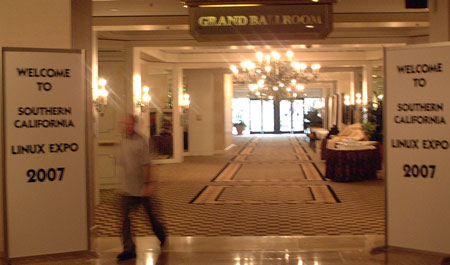 So far I like the vibe of the show. It reminds me more of LISA and less of LinuxWorld Expo. Speaking of LWE, I think my rants on the subject have gotten us permanently banned from the .org Pavilion, but I thought I’d try again to get us invited. I went to their site and searched on “Pavilion” but was met with an IIS “missing DLL” error. This was new to me but apparently the IDG websites are run on Windows. Heh, I just think it is funny that LinuxWorld Expo, arguably the largest open source conference held in the US, runs its website on Windows. Well, maybe that Apache thing will take off some day.

There is some other fun news in open source network management world. There was an article on Techtarget talking about the open source network management space. Of course, OpenNMS wasn’t mentioned once again (we are included in their Guide to Open Source Networking Tools though). I wrote the author and he was quite nice but he just hadn’t heard of us. Oh well, at least my three blog readers know where I’m coming from (grin). He did interview the father of open source network management, Ethan Galstad. Ethan started Net Saint when open source wasn’t cool, and he still remains one of the nicest guys in the business. Many people think that OpenNMS and Nagios are an either/or proposition and that we have to be enemies, but nothing is further from the truth. I’m eagerly awaiting my Nagios T-shirt and I’ll post a picture of me in it as soon as it arrives.

Speaking of Nagios, it looks like Groundwork is at it again. They’ve raised an additional US$12 million. The less that is said about them the better, but note that with the initial ~US$12 million they’ve managed to get “some 200” customers. Heh, we’re bootstrapped and have a good portion of that number, and trust me we spent way less than US$60K per customer (heck, in the beginning we spent way less than US$60K in *salaries*). Solarwinds is also mentioned in the article. We actually lost a client to Solarwinds back in the 1.1 days, but since then we have several of their users come over to OpenNMS. As a services company we don’t market software, but it is nice to get the occasional unsolicited plug that compares us to other options.

There was a post on the discuss list about Ziptie. I don’t know much about them, but they did hit my Google news reader with an OpenNMS integration. As our goal is nothing less than to become the de facto network management platform for everyone, we welcome this, but they had up a page that implied that The OpenNMS Group (the commercial company that maintains the OpenNMS project) was a partner. I wrote and suggested that they use the OpenNMS project logo (the community is much bigger than our little company) instead, and that “integrates with” is probably a better phrase than “partner”, and I also asked that they make some reference to the trademark owners of the images they used on the site. I thought I was nice and polite, but I must have done something wrong ’cause they never wrote back and they just removed the logo.

Oh well. I was a little upset that they used the tiniest logo out there for us, but I’ll get over it.

[2007-02-09 15:58 PST] Update: I just got a nice note from Brett Wooldridge, the Ziptie project lead, apologizing for the way that page was created. It was a misunderstanding and I sent in a nice big OpenNMS logo for them to use if they wish. [grin]

Anyway, back to the show. Remember that we have training in Utah in March and we are close to announcing Dev Jam 007 to be held in Minneapolis again the last week in July. Perhaps 2.0 will be done by then. (grin)