Thursday at the Open Source Summit started as usual at the keynotes. 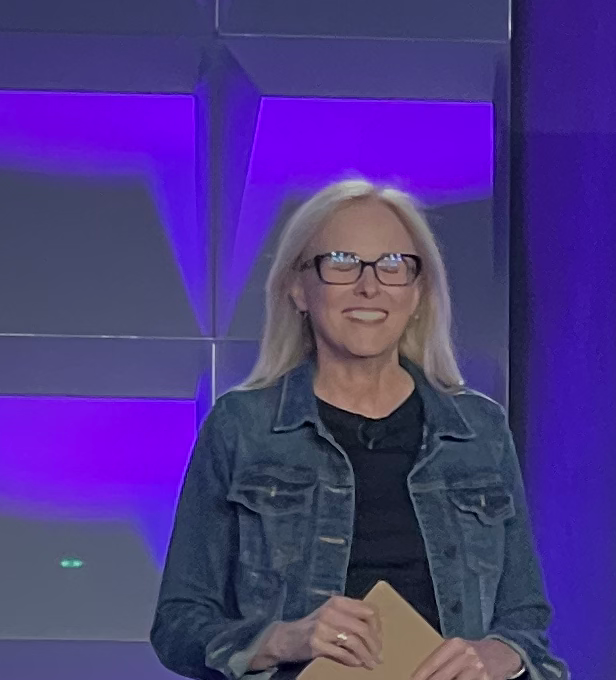 Robin Bender Ginn opened today’s session with a brief introduction and then we jumped into the first session by Matt Butcher of Fermyon. 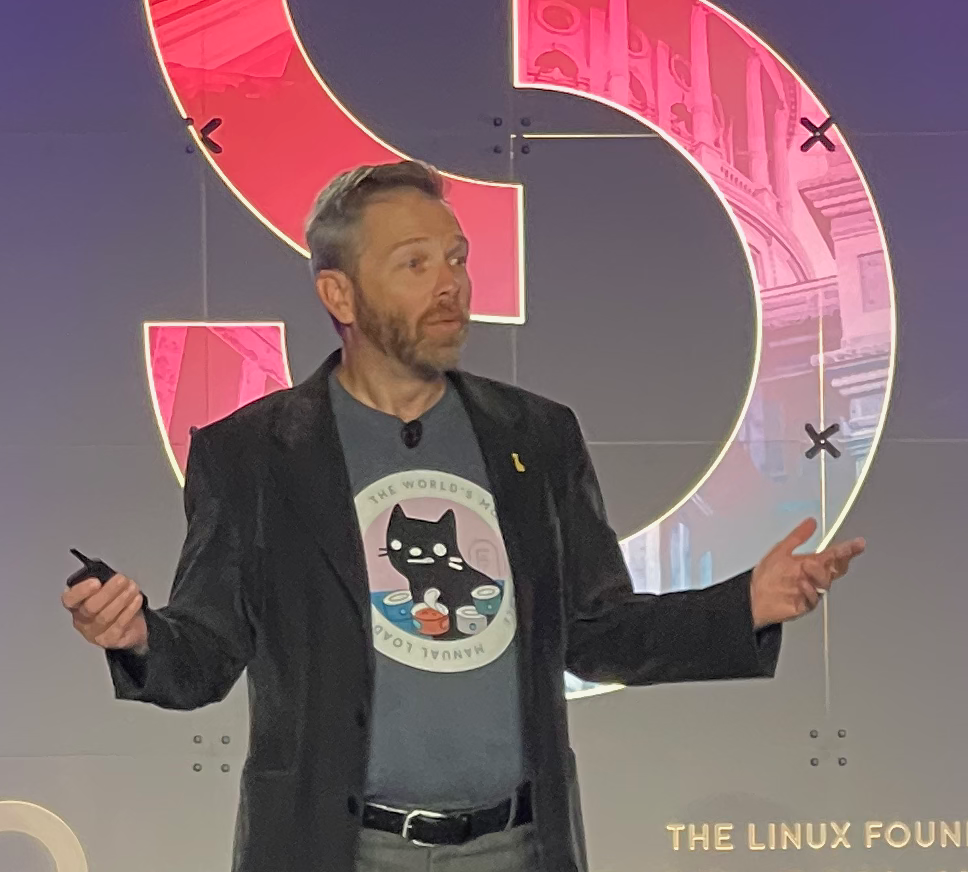 I’ve enjoyed these keynotes so far, but to be honest nothing has made me go “wow!” as much as this presentation by Fermyon. I felt like I was witnessing a paradigm shift in the way we provide services over the network.

To digress quite a bit, I’ve never been happy with the term “cloud”. An anecdotal story is that the cloud got its name from the fact that the Visio icon for the Internet was a cloud (it’s not true) but I’ve always preferred the term “utility computing”. To me cloud services should be similar to other utilities such as electricity and water where you are billed based on how much you use.

Up until this point, however, instead of buying just electricity it has been more like you are borrowing someone else’s generator. You still have to pay for infrastructure.

Enter “serverless“. While there are many definitions of serverless, the idea is that when you are not using a resource your cost should be zero. I like this definition because, of course, there have to be servers somewhere, but under the utility model you shouldn’t be paying for them if you aren’t using them. This is even better than normal utilities because, for example, my electricity bill includes fees for things such as the meter and even if I don’t use a single watt I still have to pay for something.

Getting back to the topic at hand, the main challenge with serverless is how do you spin up a resource fast enough to be responsive to a request without having to expend resources when it is quiescent? Containers can take seconds to initialize and VMs much longer.

Fermyon hopes to address this by applying Webassembly to microservices. Webassembly (Wasm) was created to allow high performance applications, written in languages other than Javascript, to be served via web pages, although as Fermyon went on to demonstrate this is not its only use.

The presentation used a game called Finicky Whiskers to demonstrate the potential. Slats the cat is a very finicky eater. Sometimes she wants beef, sometimes chicken, sometimes fish and sometimes vegetables. When the game starts Slats will show you an icon representing the food they want, and you have to tap or click on the right icon in order to feed it. After a short time, Slats will change her choice and you have to switch icons. You have 30 seconds to feed as many correct treats as possible. 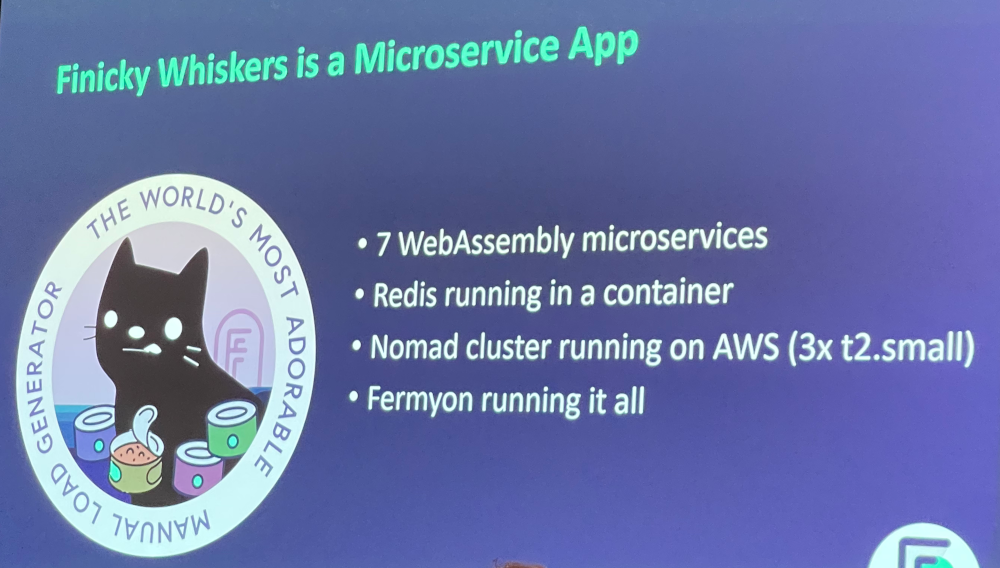 Okay, so I doubt it will have the same impact on game culture as Doom, but they were able to implement it using only seven microservices, all in Wasm. There is a detailed description on their blog, but I liked that fact that it was language agnostic. For example, the microservice that controls the session was written in Ruby, but the one that keeps track of the tally was written in Rust. The cool part is that these services can be spun up on the order of a millisecond or less and the whole demo runs on three t2.small AWS instances.

This is the first implementation I’ve seen that really delivers on the promise of serverless, and I’m excited to see where it will go. But don’t let me put words into their mouth, as they have a blog post on Fermyon and serverless that explains it better than I could. 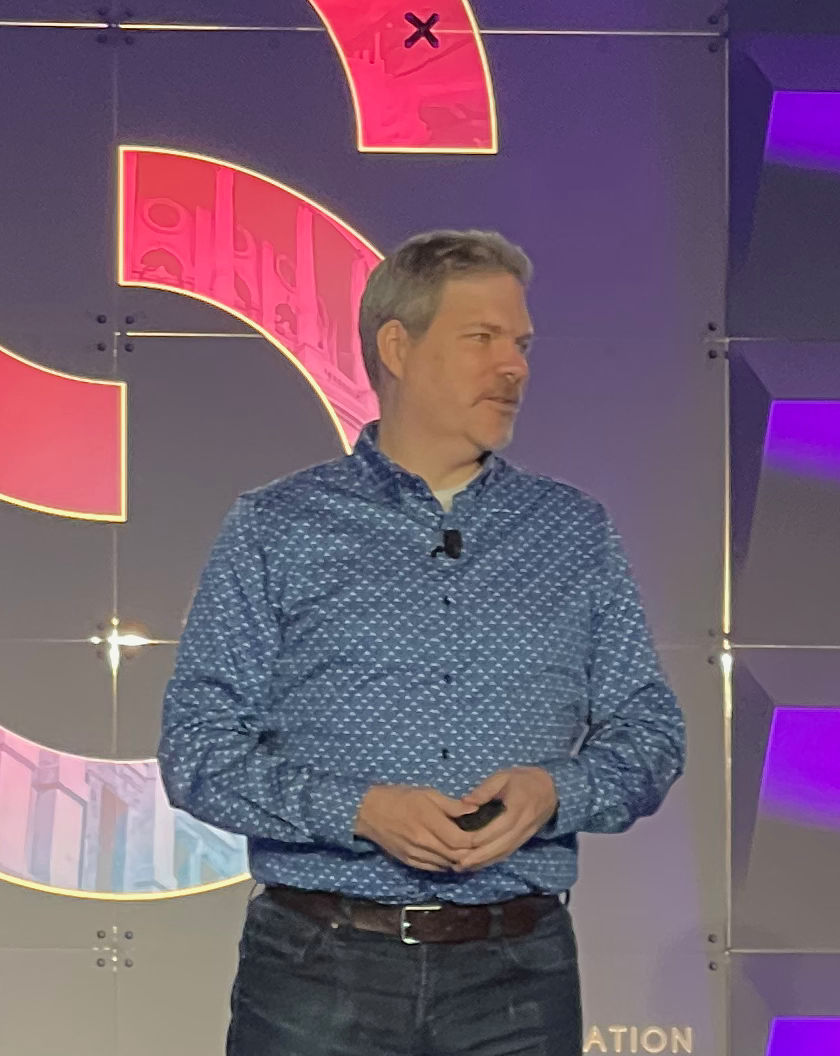 The next presentation was on OpenSearch by Carl Meadows, a Director at AWS.

Note: Full disclosure, I am an AWS employee and this post is a personal account that has not been endorsed or reviewed by my employer.

OpenSearch is an open source (Apache 2.0 licensed) set of technologies for storing large amounts of text that can then be searched and visualized in near real time. Its main use case is for making sense of streaming data that you might get from, say, log files or other types of telemetry. It uses the Apache Lucene search engine and latest version is based on Lucene 9.1.

One of the best ways to encourage adoption of an open source solution is by having it integrate with other applications. With OpenSearch this has traditionally been done using plugins, but there is a initiative underway to create an “extension” framework.

Plugins have a number of shortcomings, especially in that they tend to be tightly coupled to a particular version of OpenSearch, so if a new version comes out your existing plugins may not be compatible until they, too, are upgraded. I run into this with a number of applications I use such as Grafana and it can be annoying.

I found this encouraging. It takes time to build a community around an open source project but one of the best ways to do it is to provide easy methods to get involved and extensions are a step in the right direction. In addition, OpenSearch has decided not to require a Contributor License Agreement (CLA) for contributions. While I have strong opinions on CLAs this should make contributing more welcome for developers who don’t like them. 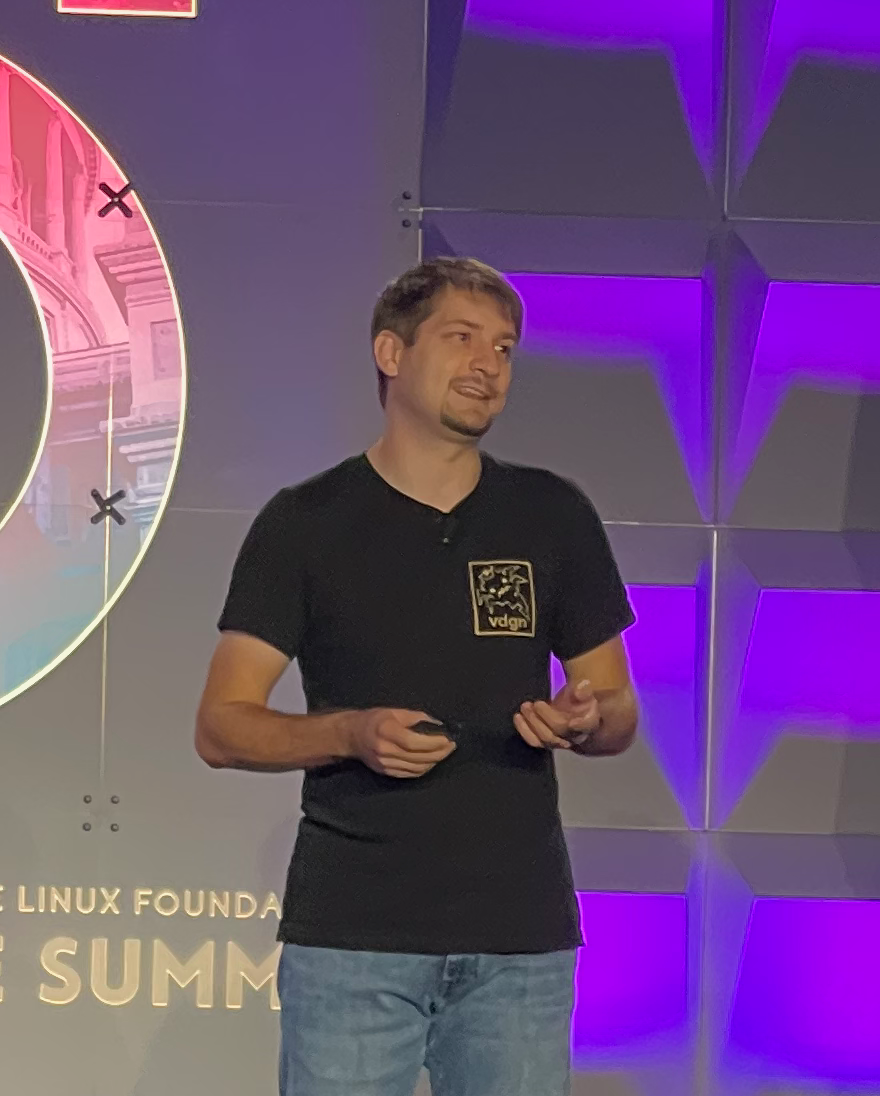 The next speaker was Taylor Dolezal from the Cloud Native Computing Foundation (CNCF). I liked him from the start, mainly because he posted a picture of his dog: 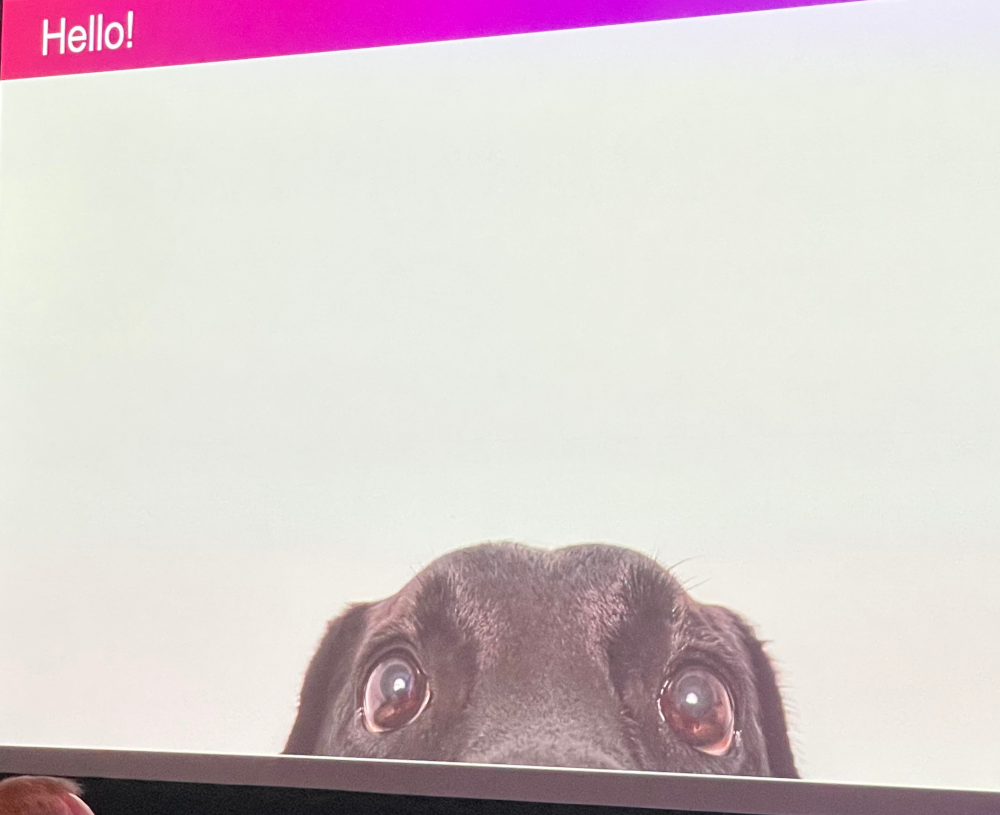 and it looks a lot like one of my dogs: 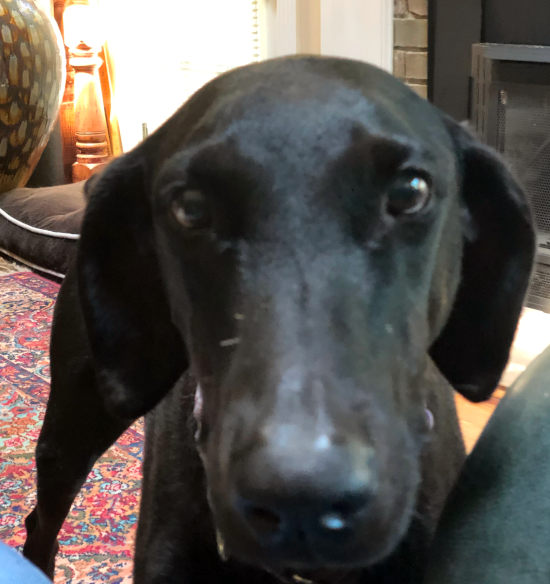 Outside of having a cool dog, Dolezal has a cool job and talked about building community within the CNCF. Just saying “hey, here’s some open source code” doesn’t mean that qualified people will give up nights and weekends to work on your project, and his experiences can be applied to other projects as well.

The final keynote was from Chris Wright of Red Hat and talked about open source in automobiles. 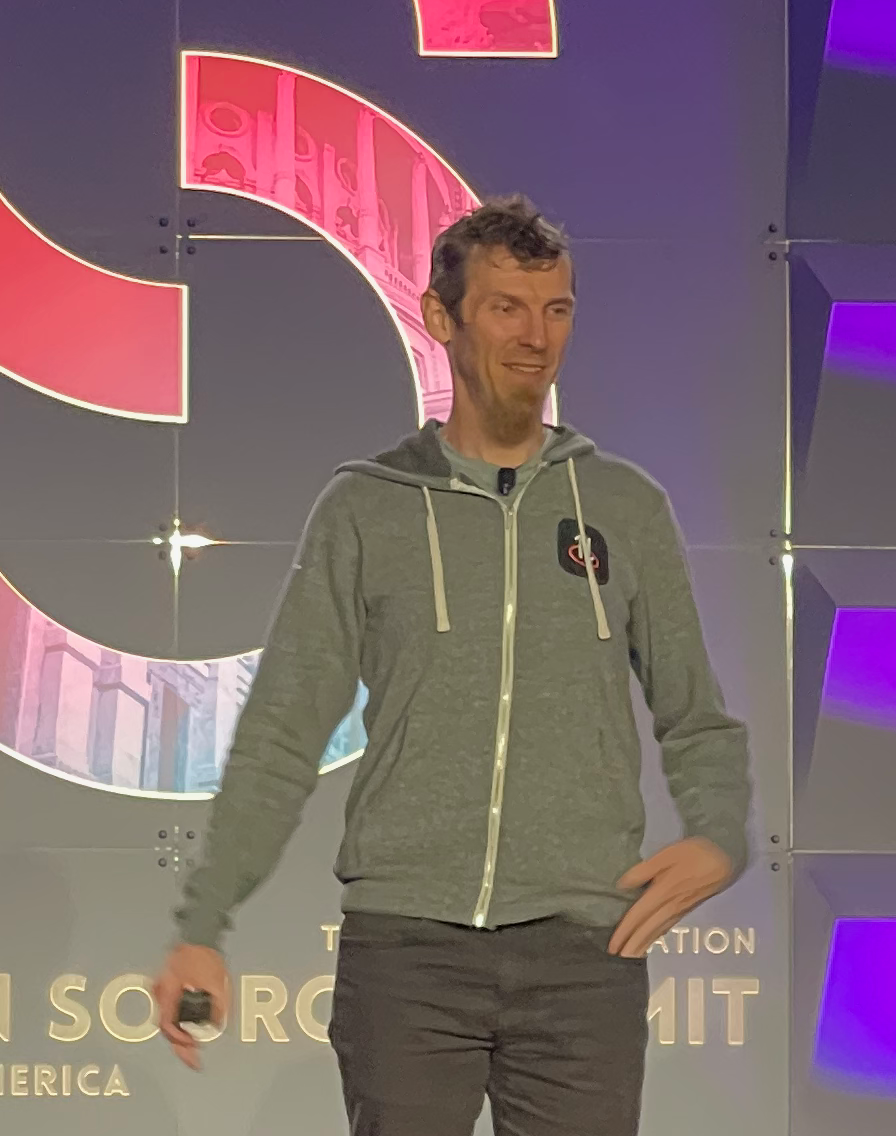 Awhile ago I actually applied for a job with Red Hat to build a community around their automotive vertical (I didn’t get it). I really like cars and I thought that combining that with open source would just be a dream job (plus I wanted the access). We are on the cusp of a sea change with automobiles as the internal combustion engine gives way to electric motors. Almost all manufacturers have announced the end of production for ICEs and electric cars are much more focused on software. Wright showed a quote predicting that automobile companies will need four times the amount of software-focused talent that the need now.

I think this is going to be a challenge, as the automobile industry is locked into 100+ years of “this is the way we’ve always done it”. For example, in many states it is still illegal to sell cars outside of a dealership. When it comes to technology, these companies have recently been focused on locking their customers into high-margin proprietary features (think navigation) and only recently have they realized that they need to be more open, such as supporting Android Auto or CarPlay. As open source has disrupted most other areas of technology, I expect it to do the same for the automobile industry. It is just going to take some time.

I actually found some time to explore a bit of Austin outside the conference venue. Well, to be honest, I went looking for a place to grab lunch and all the restaurants near the hotel were packed, so I decided to walk further out. 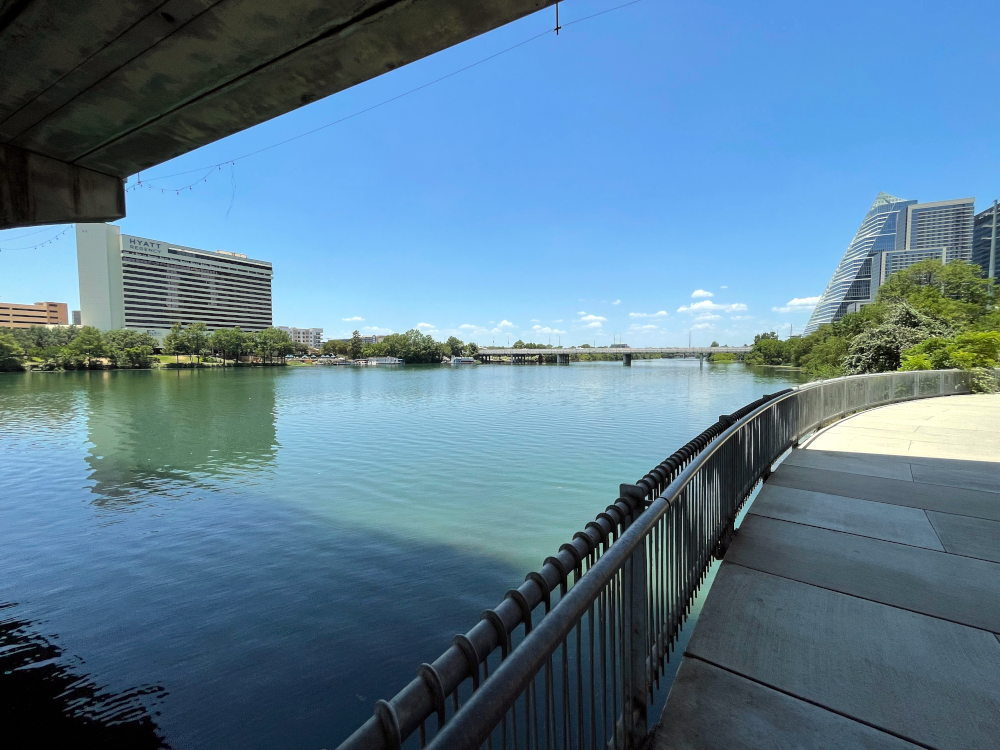 The Brazos River flows through Austin, and so I decided to take a walk on the paths beside it. The river plays a role in the latest Neal Stephenson novel called Termination Shock. I really enjoyed reading it and, spoiler alert, it does actually have an ending (fans of Stephenson’s work will know what I’m talking about).

I walked under the Congress Avenue bridge, which I learned was home to the largest urban bat colony in the world. I heard mention at the conference of “going to watch the bats” and now I had context. 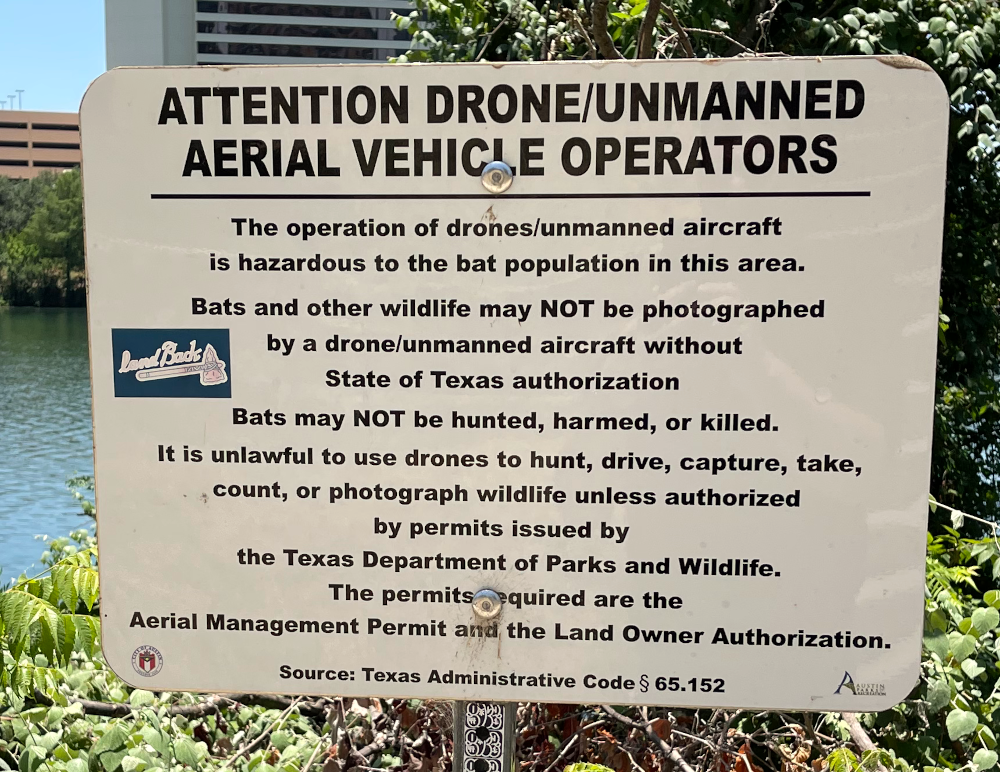 Back at the Sponsor Showcase I made my way over to the Fermyon booth where I spent a lot of time talking with Mikkel Mørk Hegnhøj. When I asked if they had any referenceable customers he laughed, as they have only been around for a very short amount of time. He did tell me that in addition to the cat game they had a project called Bartholomew that is a CMS built on Fermyon and Wasm, and that was what they were using for their own website. 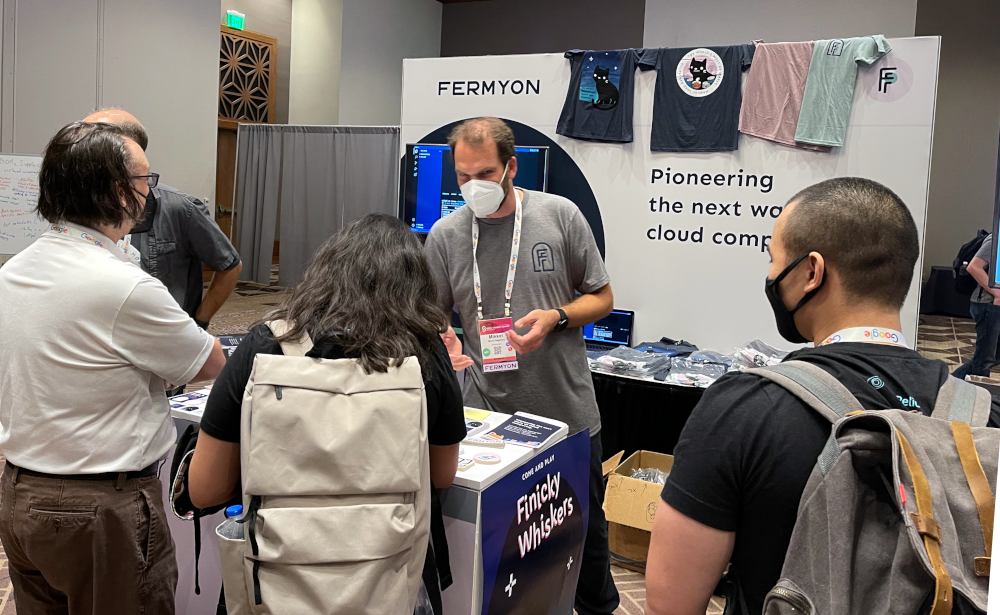 If you think about it, it makes sense, as a web server is, at its heart, a fileserver, and those already run well as a microservice.

They had a couple of devices up so that people could play Finicky Whiskers, and if you got a score of 100 or more you could get a T-shirt. I am trying to simplify my life which includes minimizing the amount of stuff I have, but their T-shirts were so cool I just had to take one when Mikkel offered.

Note that when I got back to my room and actually played the game, I came up short. 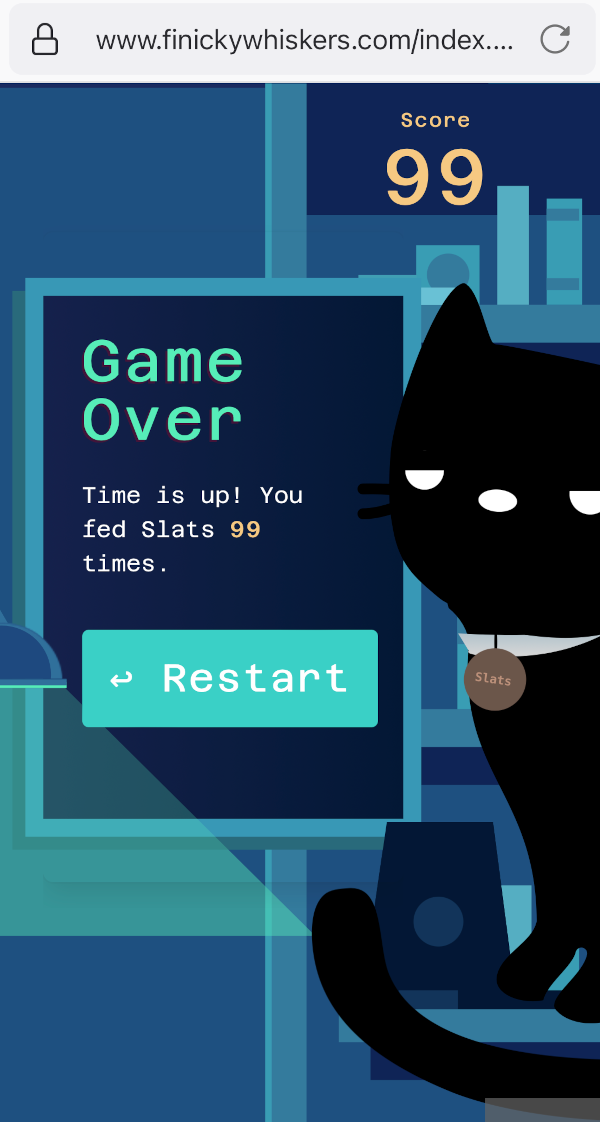 The Showcase closed around 4pm and a lot of the sponsors were eager to head out, but air travel disruptions affected a lot of them. I’m staying around until Saturday and so far so good on my flights. I’m happy to be traveling again but I can’t say I’m enjoying this travel anxiety.

[Note: I overcame by habit of sitting toward the back and off to the side so the quality of the speaker pictures has improved greatly.]