Despite how long the Tuesday night festivities lasted, quite a few people managed to make the first presentation on Wednesday morning. I’m old so I had gone to bed fairly early and was able to see “Make IT Monitoring Ready for Cloud-native Systems” bright and early.

This presentation focused on a project called RealOpInsight. This seems to be a sort of “Manager of Managers” for multiple monitoring applications, and I didn’t really see a “cloud-native” focus in the presentation. It is open-source so if you find yourself running many instances of disparate monitoring platforms you may find RealOpInsight useful.

This was followed by a presentation from Uber. 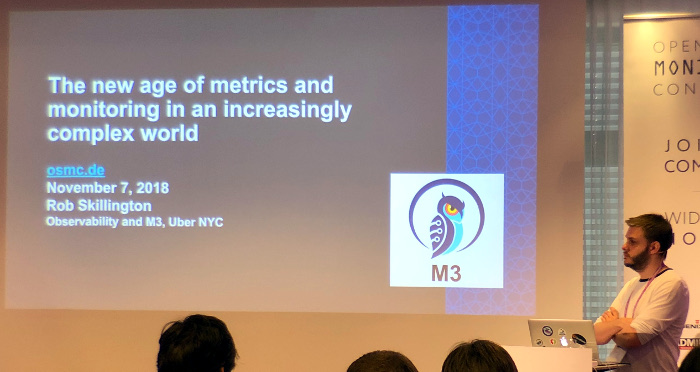 One can imagine the number of metrics an organization like Uber collects (and I did refrain myself from making snarky comments like “what database do you use to track celebrities?” and “where do you count the number of assaults by Uber drivers?”). Rob Skillington seemed pretty cool and I didn’t want to put him on the spot.

Uber used to use Cassandra, which is a storage option for OpenNMS, but they found when they hit around 80,000 metrics per second the system couldn’t keep up (one of the largest OpenNMS deployments is 20,000 metrics/sec so 80K is a lot). Their answer was to create a new storage system called M3DB. While it seems pretty impressive, I did ask some questions about how mature it was because at OpenNMS we are always looking out for ways to make things easier for our users, and Rob admitted that while it works well for Uber it needs some work to be generally useful, which is why they open-sourced it. We’ll keep an eye on it.

The next time slot was the “German only” one I mentioned in my last post, so I engaged in the hallway track until lunch.

It was lovely to see Rihards Olups again. We met at the first OSMC I attended when he was part of the “Latvian Army” at Zabbix. He gave an entertaining talk on dealing with the alerts from your monitoring system, and he ended with the tag line “Make Alerts Meaningful Again (MAMA)”. Seems like a perfect slogan for a ball cap, preferably in red.

Another delightful human being I got to see was Dave Kempe, who came all the way from Sydney. While we had met at a prior OSMC, this conference we ended up spending a lot more time together (he was in the Prometheus training as well as the Thursday Hackathon). He gave a talk on being a monitoring consultant, and it was interesting to compare his experiences with my own (they were similar).

For most people the conference ended on Wednesday. I said goodbye to people like Peter Eckel and looked forward to the next OSMC so I could see them again.

Speaking of the next OSMC, we are going to be doing OpenNMS training on that first day, November 4th, so save the date. It is the least we could do since they went to the trouble to advertise OpenNMS Horizon® on all their posters (grin). 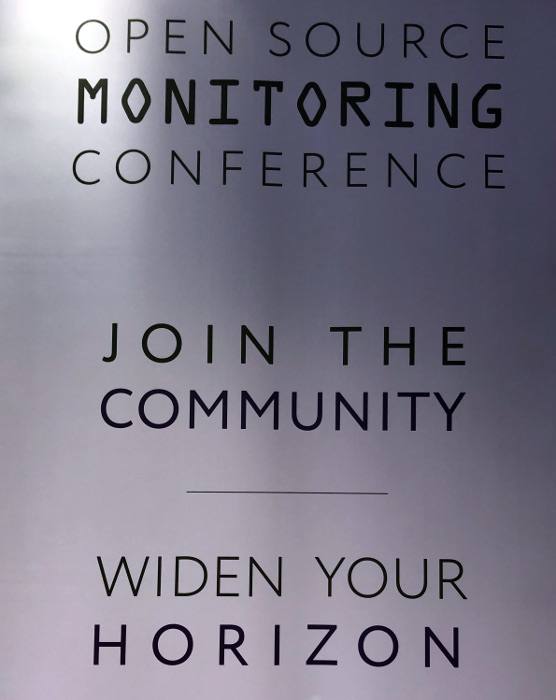 Ronny and I were hanging around for the Hackathon on Thursday, and for those attendees there was a nice dinner at a local restaurant called Tapasitos. It was fun to spend more time with the OSMC gang and to get ready for our last day at the conference. 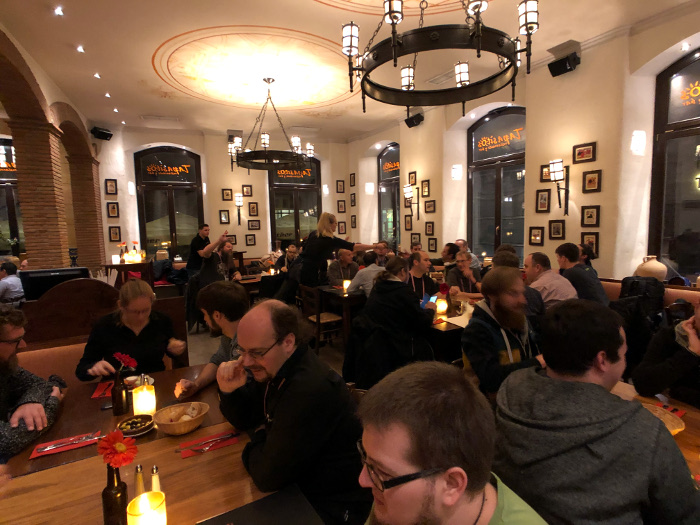