I figured I’d better get this review of the latest Bad Voltage out before the next one drops this week (sigh).

The episode clocks in at a svelte 51 minutes, and mainly focuses on two segments, one on Pokémon Go and the other on streaming music.

As the guys point out, unless you’ve been living in a cave you have probably heard of Pokémon Go (and even people in caves are playing it). It is the augmented reality (AR) game from Niantic based on the characters made popular by Nintendo.

It has also had its share of controversy, with stories of people being injured while playing and in my own neck of the woods a row over people being fined for visiting the grave of a friend.

The game from Niantic that proceeded it was Ingress, which I’ve talked about before and I showed it to the team when they did their show in Fulda. Ingress can be pretty addictive, so I was set on not playing Pokémon at all. I didn’t really need another time sink in my life.

But a couple of things happened. First, I was introduced to this short from South Park that parodied Pokémon with “Chinpokomon”. I laughed since “chinpoko” is a rude Japanese word, so of course it was one of the few words of Japanese I know. I was determined to be “chinpokomon” on Pokémon Go.

I installed the app the weekend it was released and tried to register with that “trainer” name. It wasn’t to be. I tried every variation I could think of but it wouldn’t accept it. I’m not sure if it was because they were disallowing names with anything like Pokémon in them, or that, by that time, some of the 10 million people who had downloaded it had had the same idea. So I uninstalled the app and forgot about it.

Flash forward a week or so and not only did Andrea start playing, a bunch of people at the office did too, so I decided to check it out again.

I’ll post a full review soon, but I have a few thoughts to share here. Ingress suffers from three main issues: GPS “spoofing” where people fake their location, people playing multiple accounts and the in-game chat system which is often used to heap abuse on other players.

Pokémon Go is much nicer in that there is no chat system and you can’t trade items (making multiple accounts somewhat useless). That may change in the future but for now you can play in a rather friendly environment. Even in battles your Pokémon don’t die, they “faint” and you get them back. There is still an issue with spoofing, which is how many players access the game in countries that don’t have it.

The problem with Pokémon Go is the gameplay gets old, fast. The variety of game items makes it an order of magnitude more complex than Ingress, but I’m not really into collecting a 100% version of each Pokémon. I do like getting new ones (catch them all) but Niantic has made that pretty difficult. There is a part of the screen that will show you nearby Pokémon but you don’t get a clue as to where they are. There was a website called Pokévision that reverse engineered the API and would display them on a map, and I used that extensively to get uniques. I got a lot of exercise running around the UMN campus during Dev-Jam to get one I needed. I was averaging 25,000 steps a day according to my watch, but since Pokévision has been shut down I am less eager to run around in circles hoping a Pokémon will pop up. 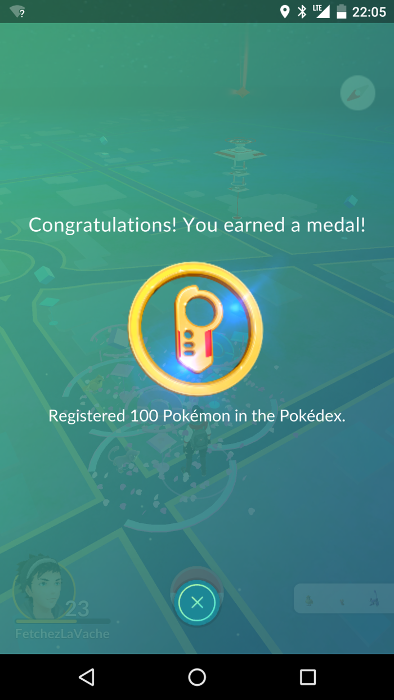 In a couple of weeks of casual play I’ve made it to Level 24 and caught 105 Pokémon (I’ve seen 106, damn Wheezing) and my interest is starting to wane (although the Tauros is my favorite, ‘natch). I’ll probably hit Level 25 (where you get access to a new item) and then cut back drastically. Which I think is going to be the major problem with Pokémon Go.

We often eat at this one restaurant in Pittsboro every Friday night, and two weeks ago one young lady who works there was really into the game. This past Friday I asked her how she was doing with it, and she said she’d stopped playing because “it was boring”.

Don’t get me wrong, Niantic has a hit on its hands, I just don’t think they will sustain the level of interest they had a launch.

The guys made some good points about it. Jeremy noted that while it is called “AR” it is really nothing more than taking the video feed from the camera and superimposing Pokémon pictures on it. It does nothing for scale or distance, for example.

Bryan detailed some interesting history that I didn’t know concerning the origin of Niantic. It grew out of a spooky company called Keyhole with designs on tracking and influencing people’s habits (although they are more well known for being the technology behind Google Maps and Google Earth). Now, as an Ingress player I’ve already opted in to allow Google to track my location, and it came in handy when Jeremy roofied me at Oktoberfest and I wandered around Munich for a few hours. I had a record of where I had gone. 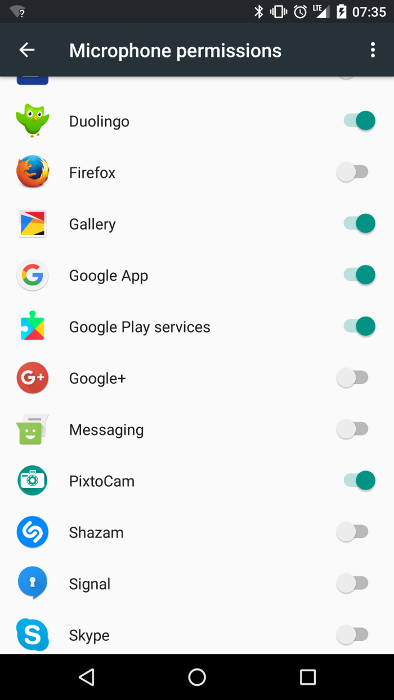 Not sure if that isn’t available on all Android releases but it seems to work on mine. Of course, many apps use Google Play Services so there’s that.

The second segment was on streaming music services. I don’t stream music so I don’t really have much to add, but I have heard that Pandora uses OpenNMS so I’m a big fan. (grin)

I do sometimes listen to SiriusXM at my desk. We have it in our cars so I have the option to stream it as well. I was listening to AltNation when I heard a track called “Loud(y)” by Lewis Del Mar. I found it on Soundcloud with a number of other tracks by them, and after it played them all it continued with similar artists. I really liked the mix (which included songs like “Thrill” by CZAR) and ended up listening to it for a couple of days. What I liked most about it is that all of them were from artists new to me. I buy the music I like and so I tend not to get much from streaming, and I also tend to listen when being connected to a network is not feasible (such as in a car or a plane), but I am considering the service from Soundcloud that let’s you listen offline (ironically called Soundcloud Go).

Which brings me to another sore point with me. The guys brought up vinyl. As many people know, vinyl is making a comeback, but dammit, it is just some sort of hipster thing since almost all music today is digitally mastered. You probably haven’t listened to a commercial record that didn’t go through Pro Tools, so when I hear “oh, but vinyl is so much richer and warmer” I have to call bullshit. Get a FLAC version of the song and you can’t get any better. Sure, you may need to upgrade your sound card and your speakers, but when, say, I get a FLAC master track from MC Frontalot it is the one that is sitting on his computer where he created it. It contains all of the information captured, and I can’t see how that gets improved by sticking it on a vinyl record whose sound quality starts to decay the moment you play it for the first time.

The Outro for the episode was kind of cool, as the guys talked about old gadgets and things like BBS’s. I can remember being in Tokyo when the Sharp Zaurus was introduced and I scoured the city looking for one in English. It was a cool device and I also liked the name. And the show brought back memories of having flame wars on a WWIV BBS system over a 2400 baud modem. The host (a high school kid who worked as a bag boy at a grocery store to pay the phone bill) could only afford a single phone line so you had to take turns. It made flame wars kind of fun – once you got in, you’d post your rant, log off, wait 30 minutes and then log back in to see if there was a reply.

All in all a nice, light episode. Nothing too heavy, kind of a like a sorbet. Hoping they bring back the meat this week.