Once again I got to visit the wonderful town of Nürnberg, Germany, for the Open Source Monitoring Conference. 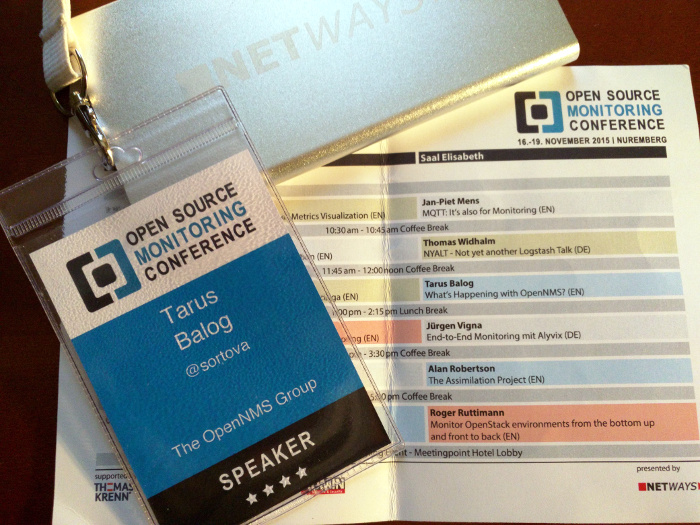 Hosted by Netways, the conference started out ten years ago as a Nagios conference. The name was changed due to an issue with the Nagios trademark, but it still focused heavily on Nagios. However, the organizers are pretty open to all things monitoring, so they started inviting projects like Zabbix and OpenNMS to come. When the Nagios fork Icinga was created, the amount of Nagios content dropped considerably, and out of 24 talks over 2 days there were only two that had Nagios in the title. Part of this has to do with Icinga 2 being a total rewrite and thus has started to move past its Nagios roots.

This year it was a cornucopia of monitoring choices. In addition to Icinga, Zabbix and OpenNMS, there was Alyvix, Assimilation, Heroic, and Prometheus. Grafana was popular and most tools are adding support for that data visualization tool, and it was nice to see talks on NSClient++ and MQTT. A little less than half the talks were in German, so there is a large German focus to the conference, but there was always an English-language talk available as well.

Nürnberg is a cool town. There is a big castle and lots of walls are left over from the original fortifications for the city. It is also home to SuSE Linux, and I made sure to swing by if just to get a picture for Bryan Lunduke: 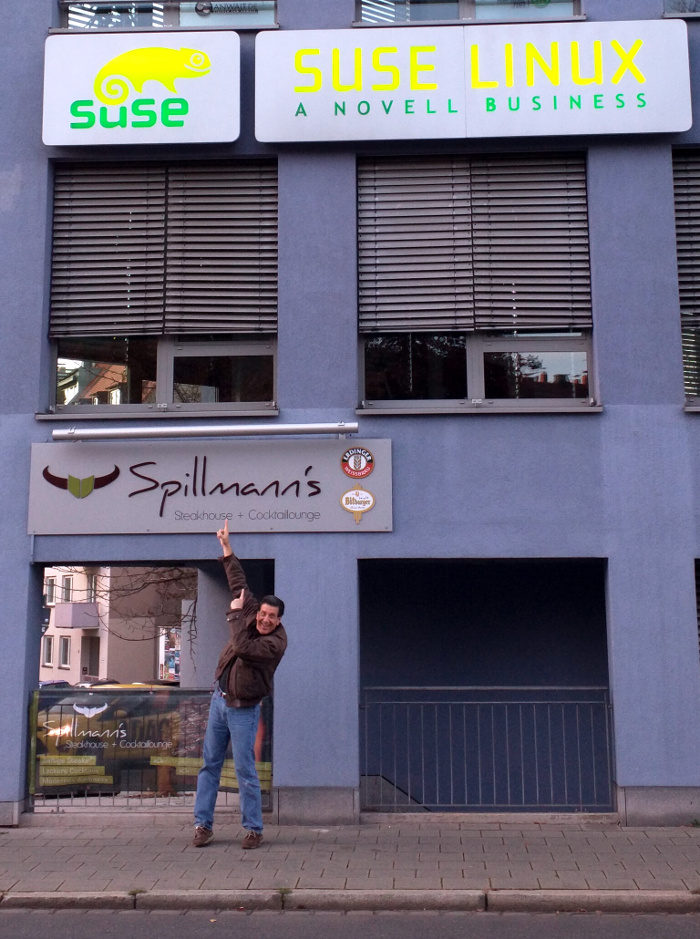 Ronny and I got there on Monday. While the main conference is held over two days, this year there were workshops on Monday and a “hack-a-thon” on Thursday. The conference pretty much takes over the Holiday Inn, City Center, hotel. While the facilities are nice, it is right next to the city’s “eros center” which seems to creep closer and closer to the hotel each year I attend. It doesn’t impact the conference in any way, and those who might be sensitive to such things can easily avoid it.

There is always lavish catering and this year we had a nice, small crowd of OpenNMS enthusiasts in attendance, and we met up for the hosted dinner on Monday night. I had not seen some of the people since the OUCE, so it was nice to catch up.

My talk was on Tuesday, the first day of the main conference. The event was sold out, with about 250 people, and at times the rooms could get quite full. 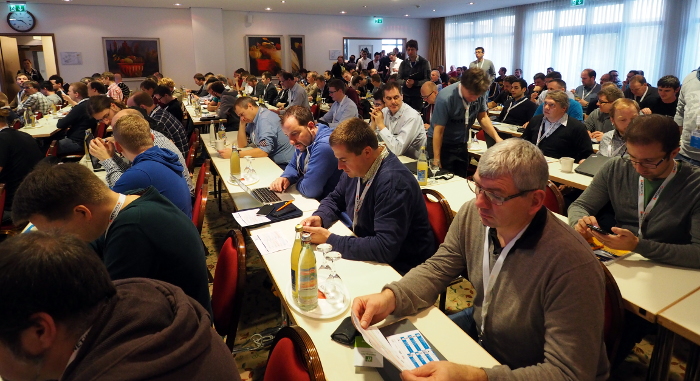 The talks were all rather good. Torkel Ödegaard talked about Grafana: 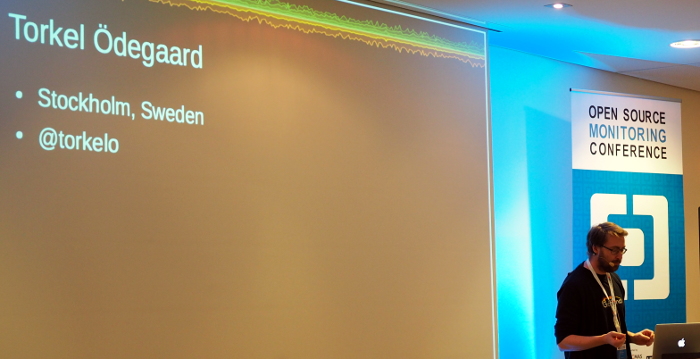 which was a big hit with crowd, and as I mentioned before a lot of projects are leveraging his work to provide better data visualization, including OpenNMS. My talk went well (I think) as I went over all of the amazing things we’ve done since last year at the OSMC, which included four major releases of our application. I was stumped with the question “How do I get started with OpenNMS?” when I realized that I didn’t have an easy answer. I can tell you how to install it, but that doesn’t get you started. I need to work on that.

That evening we returned to Terminal 90, which is an odd place to hold a dinner but it seems to work. Terminal 90 is a restaurant located at the Nürmberg airport, and it does a good job of holding everyone. We have to take the U-bahn to get there, and at least this year there were no incidents (last year someone tried to hold open the doors, which caused the autonomous train to shut down and wait for human intervention). 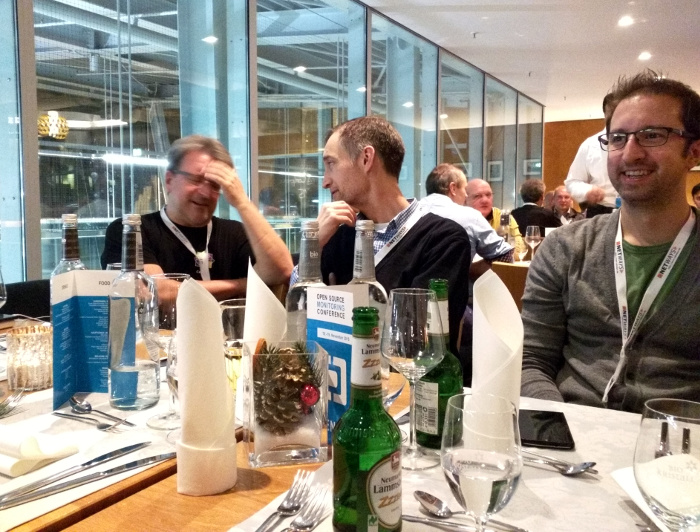 The food and drinks were good, and toward the end of the evening they had woman impersonating German pop star Helene Fischer, which was lost on me but the crowd seemed to enjoy it.

I called it a night fairly early, but this is a group that tends to hang out until the wee hours of the morning. Although my room was on the first floor, I didn’t hear much noise from “Checkpoint Jenny” across the street, so maybe everyone is getting more mellow in their old age. (grin)

The second day featured a number of talks from different projects. Usually the Zabbix talk is done by Rihards Olups, but he was unable to make it this year so Wolfgang Alper did the honors. 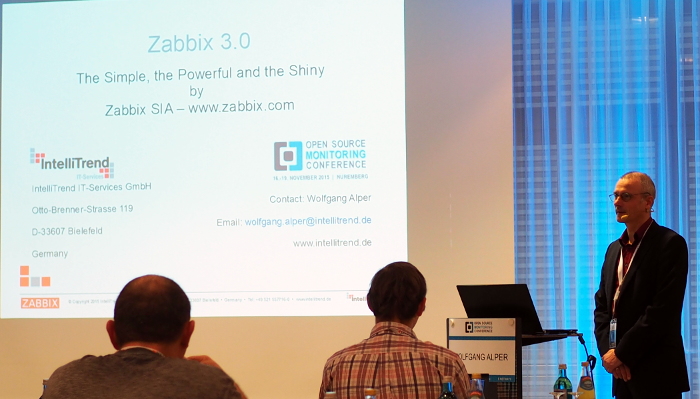 After that was a really good talk by Martin Parm on how Spotify monitors its music service. 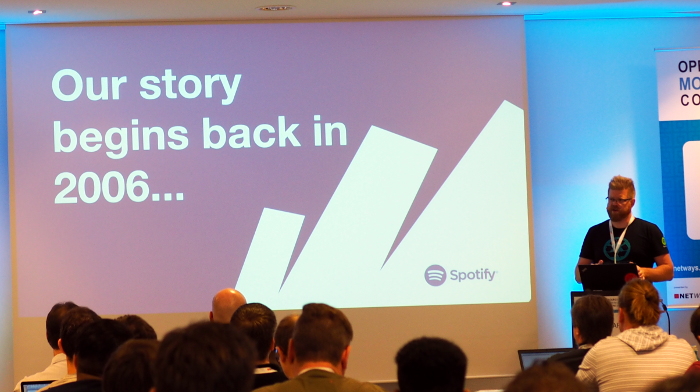 It started out with all of the tools they tried that failed, and I kept thinking to myself “don’t let it be OpenNMS, don’t let it be OpenNMS” (it wasn’t) and ended with a tool they wrote in-house called Heroic. It is a time-series data store built on top of Cassandra, and it looks a lot like the Newts tool we built. Both are open source and Apache-licensed so I’m hoping to find some synergy between the two projects. There is another large music streaming service that uses OpenNMS, but maybe we can get all of them (grin). 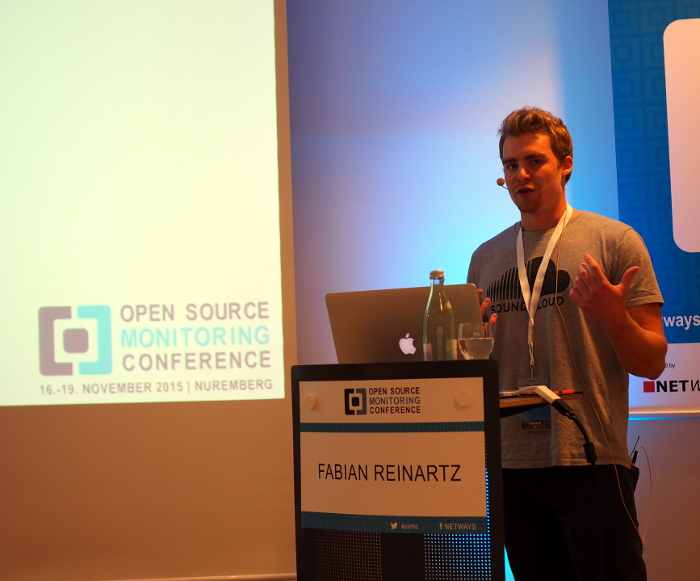 Then there was a talk by Fabian Reinhartz on a monitoring system called Prometheus. I had to joke that the name refers to the daily experience of most network managers of having their liver eaten out, but it seems like an interesting tool. Written in Go, it may find resistance from users due to the configuration being more like writing code, but that also makes it powerful. Sounds familiar to me.

I had to leave right after lunch in order to be ready to catch my flight home, but I really enjoyed my time there, even more than usual. Many thanks to Bernd Erk and the Netways gang for holding it, and they should be posting the videos soon. If you are interested in next year be sure to register early as it is likely to sell out again.