I am a fan of the Bad Voltage podcast, but as it is hard for me to listen, pay attention and work at the same time, I tend to listen to it on airplanes. A lot of ideas and comments come to me during an episode, so I’m going to start a new feature on this blog called “The Inverter” where I review and comment on each show.

TL;DR: This episode was well done. It was tight, it flowed nicely and clocks in at slightly over an hour. That is their target time but the average show is closer to 80 minutes. There was a cool little mystery at the front followed by a discussion of the Endless Computer project, which was deemed too expensive to succeed. They talked about the horrible Nest smoke detector, version one, and the much nicer version two. Aq reviews Gliffy, a web-based Visio-like application, and they end with a segment on Microsoft’s changing relationship with open source.

This week I’m on a flight to DC so it is time to pull out my copy of the latest Bad Voltage. After the intro, starting about minute three, you get two minutes of what sounds like Morse code.

Intrigued, I found an app that will decode Morse (this webby one didn’t work for me but the Android app did fine) and read the following message:

Now, I’m not sure what “Insots” or “in Sots” are but I thought it was cool that they put this in the podcast, I probably would have added it after a delay at the end of the recording, as it was a little weird listening to two minutes of beeps (I thought my mp3 download was corrupt) but then only the hardcore listeners would have made it all the way through. Apparently you can find more about this in the t00bz but I’ve been too lazy. Cool addition, though.

The first segment was on the Endless Computer, which states it is building a “computer for the entire world” which brings to mind the One Laptop Per Child (OLPC) project. But there are a lot of differences, the main one being that Endless is a for-profit company (at least I think so – during my exhaustive, nearly 60 second perusal of their website, I didn’t find any verbiage to indicate that this was a charitable foundation versus a commercial enterprise).

As a for-profit company, their gear is not inexpensive, and most of the discussion on the show concerned the price, which is pretty steep for the hardware. There is also the issue that you still need to spend even more money to get it functional (as in buy a keyboard and a mouse). Jono, who was the only one who has actually played with the thing, pointed out that the user experience they have created is pretty nice, but the rest of the gang was still stuck on the price.

Now, I have zero experience with the thing but since that hasn’t stopped me from having an opinion before, here are my thoughts.

First off, I loved the OLPC project. I wonder what would have happened if the OLPC project started now, with the vast improvements in open source operating systems, instead of having to come up with their own O/S that was a little hard to understand.

Endless is not OLPC, and I think that’s the main reason for the price point – they need and want to make money.

If I really wanted to get computing power into the hands of the disenfranchised I would have gone with a tablet. For $229, you can make a decent tablet, which would remove the need to have a TV or keyboard/mouse. You could even add an option to charge it via solar cells. Heck, even the Endless website says “as simple as a tablet” which makes you wonder why they didn’t build one of those (margins, probably). With PC sales in free fall, starting a company to make a new one seems silly – like making a “VCR for the World”.

No, what I think happened is that someone found an investor in the Valley who heard “2 billion potential customers” and started seeing dollar signs. We can be the third world Apple! Simply make a funky design, hire a “Chief Growth Officer” and then … profit!

Another sign of impending doom is that they don’t even own the “endless.com” domain name. According to Paul Graham, it matters.

I’m willing to wager Endless is pretty much DOA, but then I guess I’m just bitter in that this pipe dream got funded and I can’t find decent investors for my company, which actually makes a profit. (sigh)

Moving on, the next segment was on the Nest “Protect” smoke detector. Apparently the first generation ones were crap, but Jeremy invested in the second generation and, so far, likes them. They have all kinds of whiz-bang features, such as two different sensors for various types of fires, and a networking feature so that in, say, a three story house like Jeremy’s, the detector on the third floor can set off all of the others.

I’ve avoided Nest products because I’m a bit of a privacy nut (odd, considering that I share most of my life on-line, I know). I don’t want microphones in my house. I don’t want things “phoning home”. Plus, my old smoke detector works just fine and alerts the nice people who provide my security monitoring when I cook bacon, so I don’t see the need to upgrade.

I did like hearing about the feature where the Nest can serve as a night-light and light up when people walk by it, sort of like the lights in a European hotel hallway. But I think I’d rather engineer that solution on my own then to buy something that is always talking to a third party, no matter how often that third party says I can trust them.

This episode the guys have introduced something called “Hack Voltage” in which one of the hosts will review something cool they’ve discovered. Aq did a short segment on “Gliffy” – a diagramming tool like Visio that you can run in a browser. As a hosted solution, you get some bits for free but then you pay a subscription fee for more features and storage. He seemed to like it, but for me I’d rather struggle with something open source, but if I ever have the need for such a tool I’ll check out the “free” version. 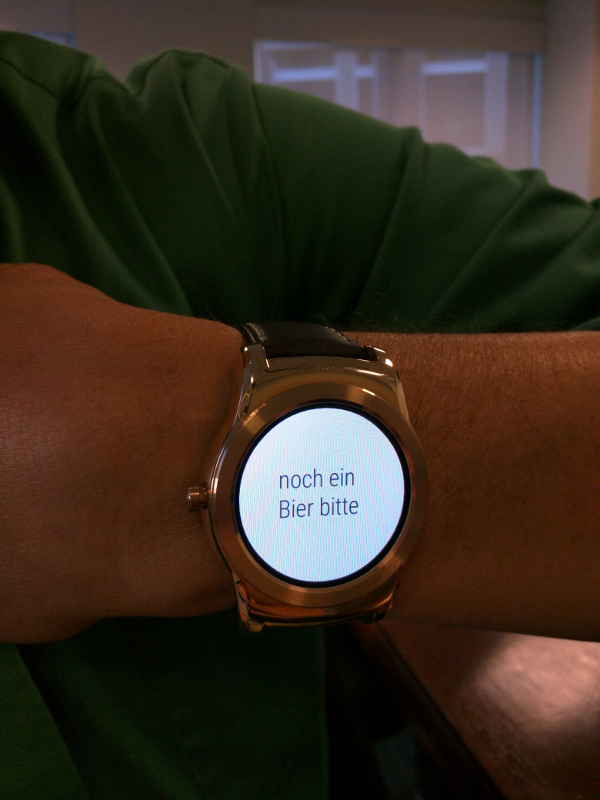 For my own version of Hack Voltage, the coolest new thing I’ve been playing with is Google Translate on my watch. I haven’t had time to make a video, but you set up your source and destination languages, speak into to the watch, and voilà, translation. When you flip the watch over (like you would when showing it to another person) it enlarges and displays just the translated text. I plan to use this a lot when I’m in Germany for the OUCE and Bad Voltage Live.

The final segment was on Microsoft warming to open source, which it once referred to as a “cancer”. The new CEO seems to be very open to working with open source projects as well as integrating with them, although certain things, like requiring Surface tablets to boot in secure mode, seem to harken back to the bad old days.

All I can say is that Microsoft has always treated OpenNMS well, including gifting us with an MSDN subscription so that we can improve OpenNMS support on Windows. Overall, Microsoft is much more friendly toward open source than they have been in the past.

That was it for this episode. Short and focused with a minimum of swearing and a modicum of mystery. Just one more show before they descend on the little town of Fulda, and I’ll probably listen to it on the plane ride over there. Hope you can make it.