Today is the 11th anniversary of The OpenNMS Group. We started on September 1st, 2004 with little more than a drive to build something special, a business plan of “spend less than you earn” and a mission statement of “Help Customers, Have Fun, Make Money”.

Since I’m still working and people are using software other than OpenNMS to manage their networks, I can’t say “mission accomplished” but we’re still here, we have a great team and the best users anyone could want, so by that measure we are successful.

When it comes to the team, one thing I worry about is how to connect our remote people with the folks in North Carolina. We do a lot of Hangouts, etc, but they lack the aspect of initiative – the remote guys have to be passive and just sit there. Then I got the wild idea to investigate getting a telepresence robot. Wouldn’t it be cool if remote people could pop in and drive around the office, attend meetings, etc?

After a lot of research, I decided on a robot from Double Robotics. 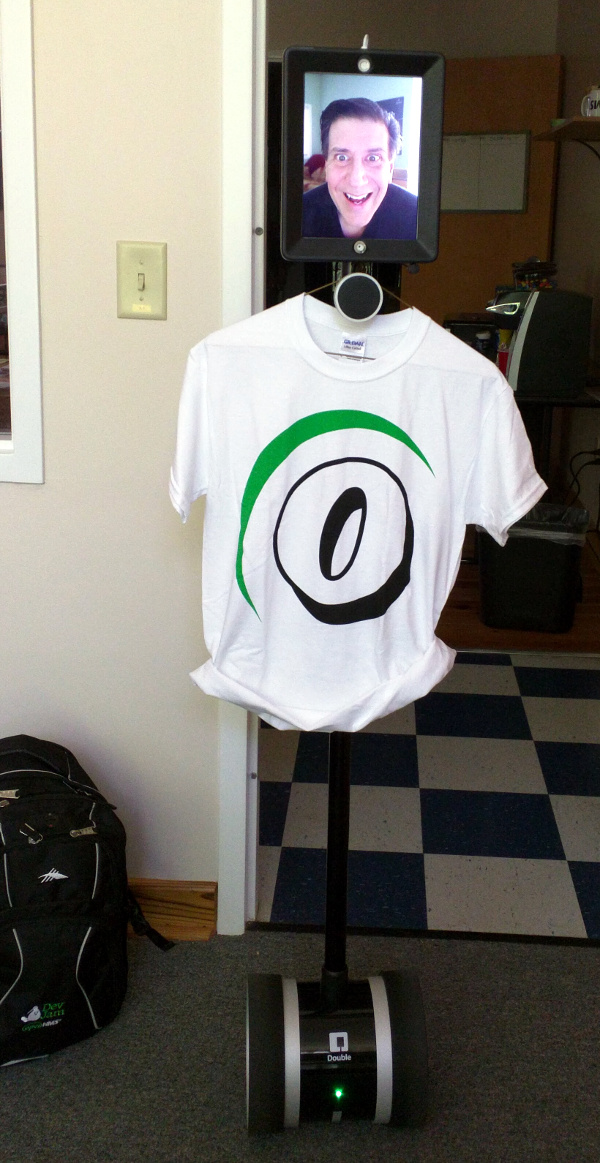 The buying decision wasn’t a slam dunk. It is a very iPad/iOS centric solution which bothered me, and I had some issues concerning the overall security of the platform. So, I sent in a note and ended up having a call with Justin Beatty.

It was a great call.

Double is pretty serious about security, and assuming there are no firewall issues, the connection is encrypted peer-to-peer. While there are no plans to remove the requirement that you buy an iPad in order to use the robot, they are working on an Android native client. You can drive it on almost any platform that supports the Chrome browser (such as Linux) and you can even use it on Android via Chrome. There is a native iOS app as well.

What really sold me on the company is that they are a Y Combinator project, and rather than focus on raising more capital, they are focused on making a profit. They are small (like us) and dedicated to creating great things (like us).

Justin really understood our needs as well, as he offered us a refurbished unit at a discount (grin).

Anyway, I placed an order for a Double and (gulp) ordered an iPad.

It was delivered while I was away in England, but I was able to get it set up on Monday when I returned to the office. They have a number of easy to follow videos, and it probably took about 20 minutes to understand how everything went together.

You take the main body of the robot out of the box and place it on the floor. I had purchased an external speaker kit (otherwise, it uses the iPad speaker) which makes it look like a little Dalek, and you install that on the main post. Then you plug in the iPad holder and screw it to the post with a bolt. That’s about it for robot assembly.

The next step is to take the USB charging cable that came with your tablet and mount it inside the iPad holder. You then insert the iPad upside down and connect the cable so that the robot can power and recharge the iPad. The Double supports any iPad from version 2 onward, and they have a spacer to use for the iPad Air (which is thinner). Finally, you connect a directional microphone into the audio slot on the bottom of the iPad (or top, depending on how you look at it) and the unit is assembled.

Then I had to set up the iPad, which was a bit of a pain since I’m no longer an Apple person and needed a new Apple account (and then I had to update iOS), but once it was configured I could then pair the iPad to the robot via bluetooth. Next, I had to download the Double app from the App Store and create a Double account. Once that process was complete, I could login to the application on the tablet and our robot was ready to go.

To “drive” the robot, you log in to a website via Chrome. There are controls in the webapp for changing the height of the unit, controlling audio and video, and you move the thing around with the arrow keys.

When moving you want to have the robot in its lowest height setting. Not only will it go faster, it will be more stable. This isn’t an off road, four wheeling type of robot – it likes smooth services. There is a little bump at the threshold to my office and once the robot has gone over that you want to wait a second or two because it will wobble back and forth a little bit. Otherwise, it does pretty well, and because the rubber wheels are the part of the robot that stick out the most in the front and the back; if you run into a wall it won’t damage the iPad.

I did have to mess with a couple of things. First of all, it needed a firmware upgrade before the external audio speaker would work. Second, sometimes it would keep turning in one direction (in my case, to the right), but restarting the browser seem to fix that.

You do need to be careful driving it, however. One of my guys accidentally drove it into a table, so it hit the table along the “neck” of the robot and not on the wheels. This caused the unit to shoot backward, recover and then try to move forward. It fell flat on its face.

Which, I am thankful, did no damage. The iPad is mounted in a fairly thick case, and while I wouldn’t want to test it you are probably safe with the occasional face plant.

I bought an external wireless charger which allows you to drive the robot into a little “dock” for charging instead of plugging it in. To help park it, there is a mirror mounted in the iPad holder that directs the rear camera downward so you can see where you are going (i.e. look at the robot’s “feet”). Pretty low tech but they get points for both thinking about it and engineering such a simple solution.

Everyone who has driven it seems to like it, although I’m thinking about putting a bell on the thing. This morning I was jammin’ to some tunes in my office when I heard a noise and found Jeff, piloting the robot, directly behind me. It was a little creepy (grin).

I bought it with a nice (i.e. expensive) Pelican case since the plan is to take it on road trips. I bought the iPad that supports 4G SIM cards so I should be able to use it in areas without WiFi. It’s first outing will be to the OpenNMS Users Conference, which is less than a month away. If you haven’t registered yet, you should do so now, and you’ll get to see the robot in action. 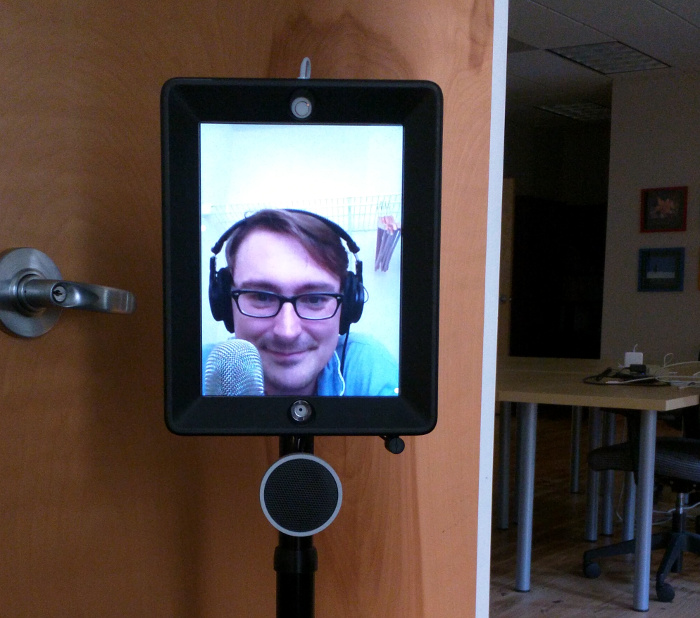 Bad Voltage will also be there, with Bryan Lunduke piloting the robot from his home in Portland. I had him try it out today and he commented “So rad. So very, very rad”.

At the moment I’m very pleased with the Double from Double Robotics. It’s a little spendy but loads of fun, and I can’t wait to use it for team meetings, etc, when people can’t make it in person. You can also share the output from the unit with other people with the beta website, although you could always just do a Google Hangout and share the screen.

I even like the Double Robotics logo, which is a silhouette of the robot against a square background to form a “D”. I am eager to see what they do in the future.