Okay. When it comes to tech, I want the latest and greatest. To me, the “greatest” must include as much open software as possible. As an ex-Apple user, I want the same experience I used to get with that gear, but with free and open source software.

It can be hard. Rarely is the open source world involved in new hardware decisions by the major vendors, so we learn about new devices after the fact. Thus there is an inevitable delay between when a product is announced and when it properly works with FOSS.

Such was the case with the new XPS 13 laptop from Dell.

Now, I vote with my wallet, so back in 2012 when I needed a laptop I bought the second edition “Sputnik” Dell XPS 13, which shipped with Ubuntu. It served me well for many years and currently runs Linux Mint 17.1 with no problems. When the latest edition XPS 13 was announced, I immediately ordered it, but it didn’t work out so well.

When I discovered that the other option from Dell, the M3800, wasn’t for me, I decided to wait until they officially supported Ubuntu on the new XPS 13. I didn’t have to wait long, and I placed my order the day I learned it was available (I was happy to learn that they had to fix some kernel-level issues and it wasn’t just me).

Why didn’t I wait longer? The XPS 13 is gorgeous. I haven’t felt this strongly about a laptop since my 12-inch Powerbook back in 2013. Others seem to agree, with even Forbes praising this machine.

Anyway, the order process was simple. I got the XPS 13 with the i7 processor, 8GB of RAM, 512GB SSD and the HiDPI touchscreen. The laptop arrived about a week before it was scheduled. Go Dell. 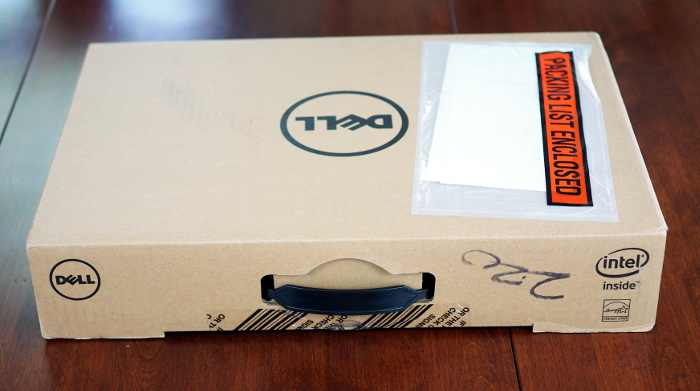 The laptop itself came in a separate box: 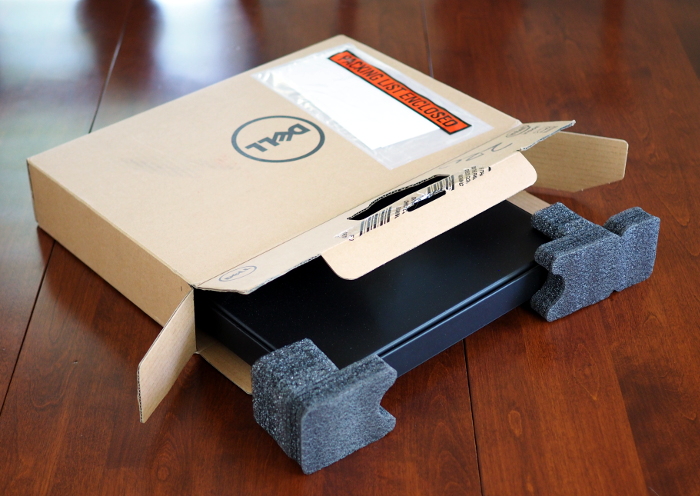 with the accessories shipped in a cardboard “square tube”: 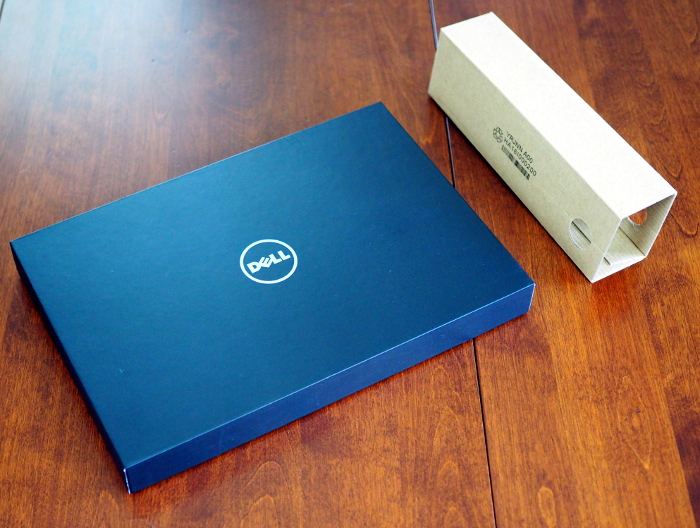 While the small power supply came with a longer power cable with a “mickey mouse” connector, the XPS 13 comes with a small adapter that gets rid of the cable entirely (like the Apple laptop power bricks). 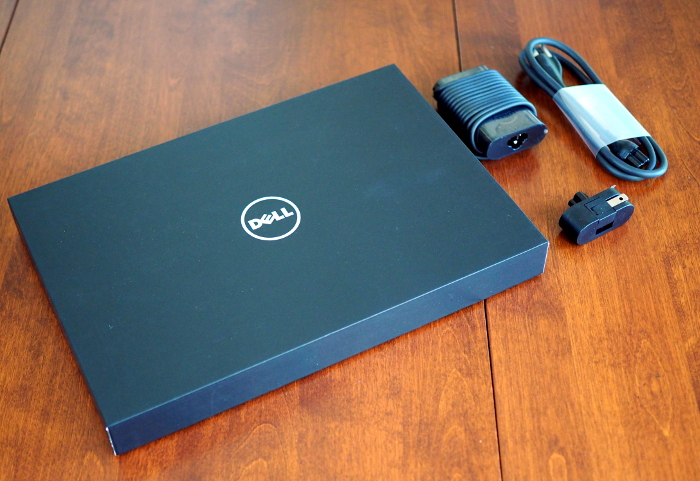 The laptop pretty much fills up its box: 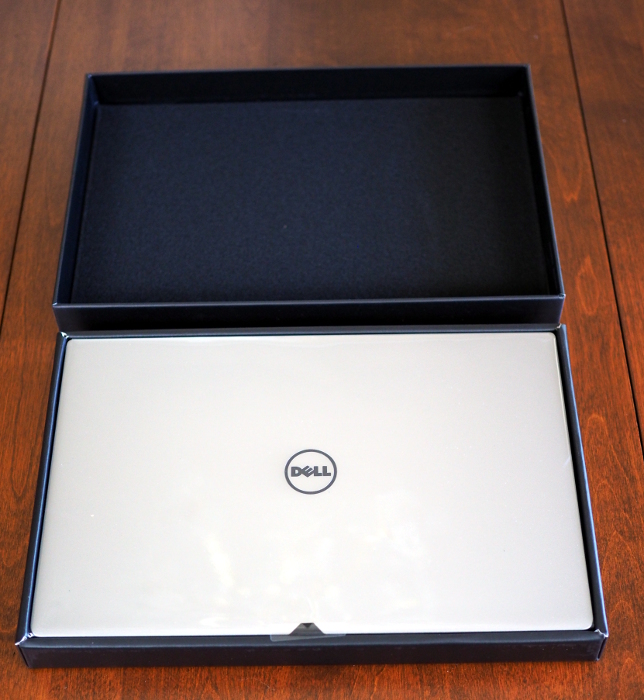 Like with my original XPS, there is a cool little intro video that plays when you first start it up:

Please note that it only runs on the first start – you will not have to wait 40+ seconds to boot your system (usually less than 10).

The XPS 13 Ubuntu Developer Edition ships with 14.04, but I had some issues with it. First, it didn’t have the option for encrypting the home directory. I’m not sure how or why that got removed. The system also crashed when I attempted to make a backup image to a USB stick. Finally, there are apparently still outstanding issues with 14.04:

Ubuntu 14.04 includes kernel 3.13. The touchpad will run in PS2 mode and the soundcard will run in HDA mode. Currently (4/15) out of the box the HDA microphone will not work, and you will need some packages from the factory shipped image to make it work properly.

While I knew I was going to base the system, I logged in to the stock image to check out the apt repository. There really wasn’t anything outside of the vanilla Ubuntu (the few Dell packages seem to be just for recovery) so I felt fairly safe in reinstalling.

I immediately went to my default distro, Linux Mint 17.1, but found that a lot of things, especially the touchpad, didn’t work as expected. It did handle HiDPI screens just fine (you could actually see the mouse pointer increase in size when logging in). I figured I’d wait until 17.2 comes out and try it again.

On a side note, I don’t know why it is so hard to get a decent touchpad under Linux. We’re getting closer, but still, it tends to be the weakest point of the Linux laptop experience.

In search of a solution, I found Barton’s Blog and read the following:

It had been awhile since I’d used Unity, and it has really matured. I especially liked the little touches. When I changed my desktop background, the background of the Dock changed color to match it. Neat.

Where Unity still has some way to go is in HiDPI support. There is a scaling factor you can set, but it only applies to a small part of the UI. I still ended up having to customize many of my apps. For example, if you look at the settings page with scaling, a lot of the text under the icons are cropped: 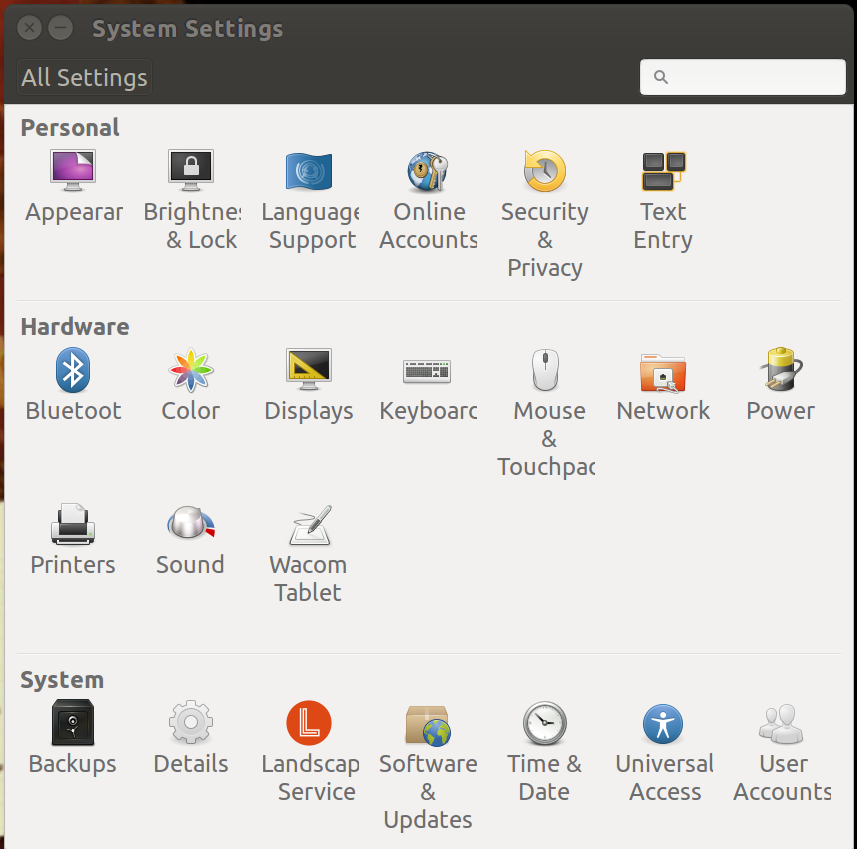 Not a show stopper, and I used it for over a month without getting too annoyed.

Last week I saw that the release candidate for Mint 17.2 was out, so I dutifully backed up my Ubuntu install, based the system and installed Mint. Things seems to work better (although HiDPI support was not working by default), but I ran into a weird problem with trying to click and drag.

While everyone seems to deal with trackpads differently, the way I click and drag is to use the index finger of my left hand to click and hold the lower left corner of the trackpad, and then I use the index finger of my right hand to move the mouse pointer. This works fine under most desktop environments, but under Cinnamon it seems to interpret it as a right click (which usually causes a menu to drop down). If I just used a single finger to click on the window header and then move it, it worked as expected, but I couldn’t get used to it enough to continue to use it.

Oh well. I’ve posted a question on the Mint forums but no one has been able to help.

Anyhoos, since my system was based I decided to try out some other 15.04-based distros while I had the chance. I had heard great things about the new Plasma interface in KDE, so Kubuntu was next.

I can’t say much about Kubuntu since its HiDPI support is worse than Unity. Everything was so tiny I couldn’t spend much time in the UI. Oh well, what I saw was pretty.

And I should stress that this was a recurring theme in my experiments with desktop environments. Every UI I’ve tried has been beautiful and more than able to compete with, say, OS X.

By this point I decided to punt and just search on “Linux Desktop HiDPI”. Several of the results touted that Ubuntu Gnome was the best desktop to use for HiDPI systems. So, before going back to Unity I decided to give it a shot.

I haven’t used Gnome 3 in awhile, but I was encouraged in that even the install process handled the HiDPI screen well. It has become really mature, and so far has provided by far the best experience with the XPS 13. I’ve had to do little to get it to work for me.

Is it flawless? No. There is an issue with the touchpad where it occasionally translates touches into click (kernel patch approved). If you sleep the system, the touchscreen will stop working (but you can reload its module). Sometimes, the system doesn’t sleep when you close the screen, which can cause the laptop to get really, really hot.

But these are minor issues and I expect them to be addressed in the near future. I am confident that I’ve found a great combination of software and hardware, and that it will only get better from here.

I have just a few more notes to share. The battery life is outstanding – I can get 6-7 hours of use without recharging. The “infinity screen” is beautiful and bright, but by having almost no bezel they had to move the camera to the lower left corner, which creates a slightly odd viewing angle. 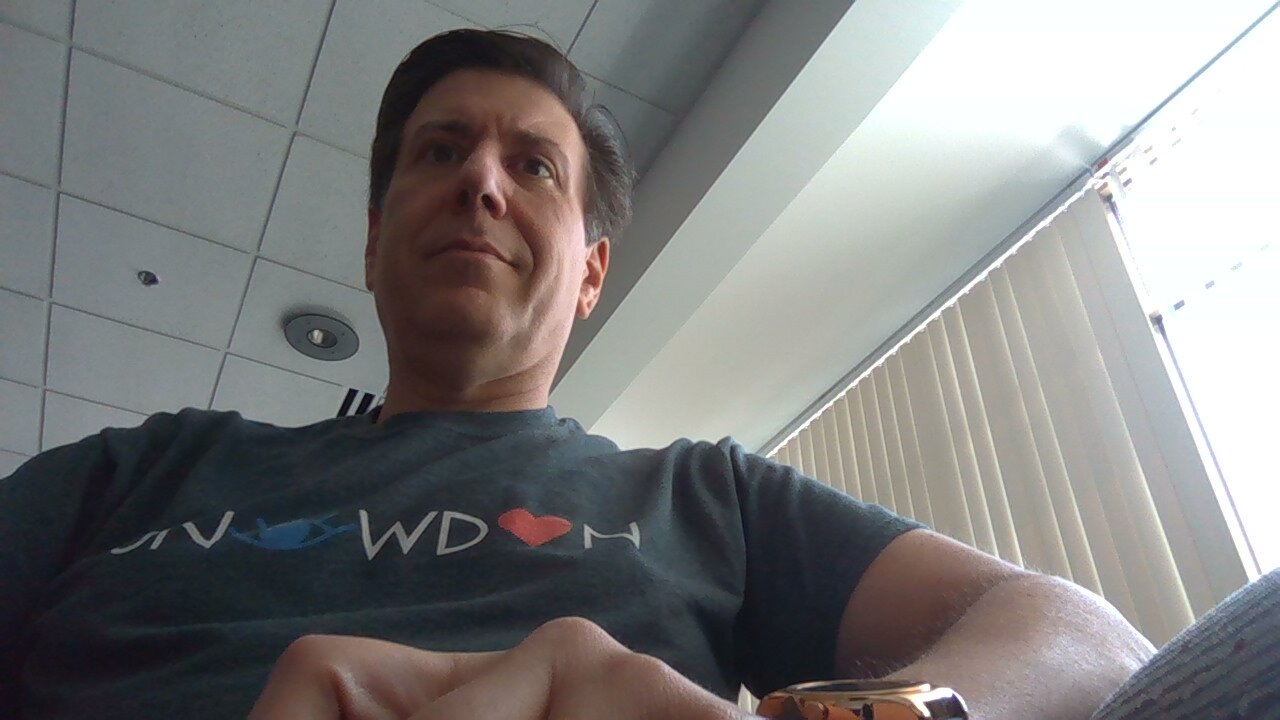 In closing, here are a couple of shots comparing the XPS 13 with the M3800. 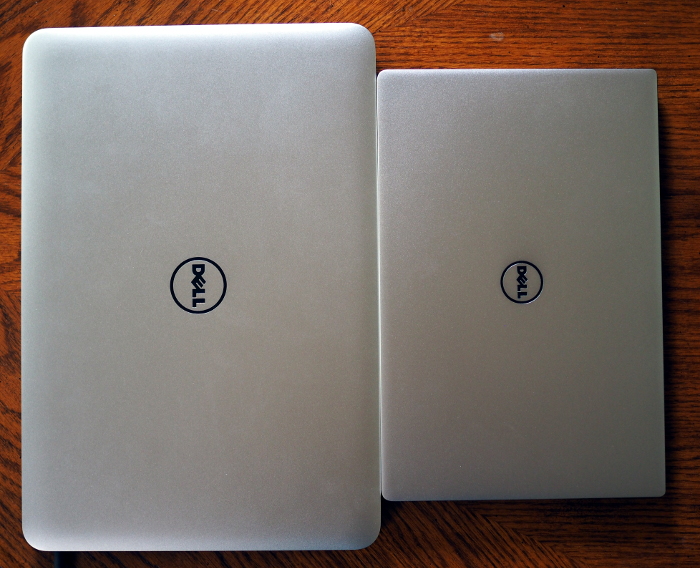 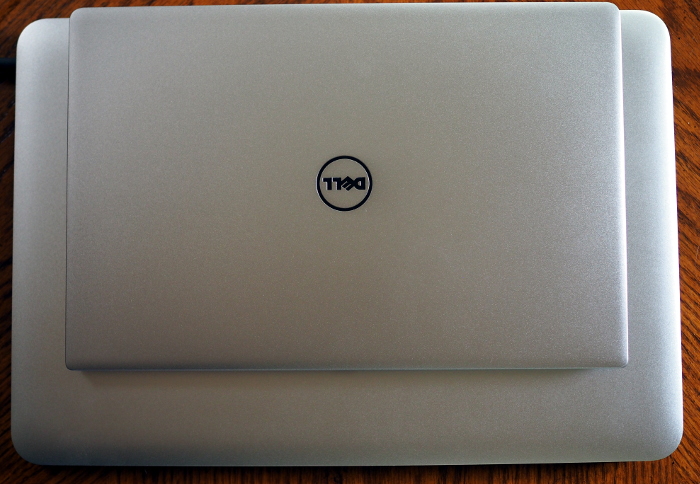 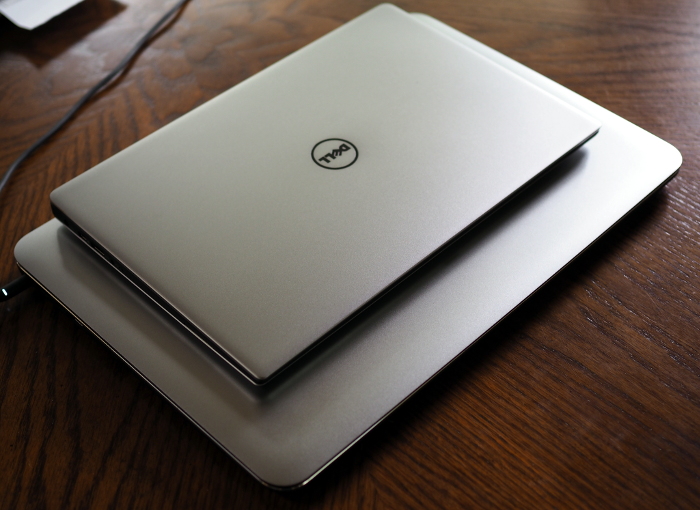