Day Two of SELF was a bit of a whirlwind. While I love going to conferences, “booth duty” can sometimes be a bit tiring, but for some reason the time just seems to fly at this conference.

Speaking of booths, I got to stop by the Rackspace table. I have a soft spot for Rackspace since they were our first major customer at OpenNMS and if it weren’t for them we probably wouldn’t be here.

They have a reputation for hiring top-notch people, and at the show they have a little “break/fix” challenge. You are given ten minutes to complete eight tasks, and like Spinal Tap the score goes to eleven.

I was a little disappointed with my score of seven, but I can always claim I was distracted by a couple of people coming by to say “hi” while I was taking the test. Not that it would have made any real difference, but what is a day without at least one good rationalization.

I asked Jesse to give it a shot and he score a more respectable nine, and I didn’t hear of anyone getting it completely right, but it was fun to do. 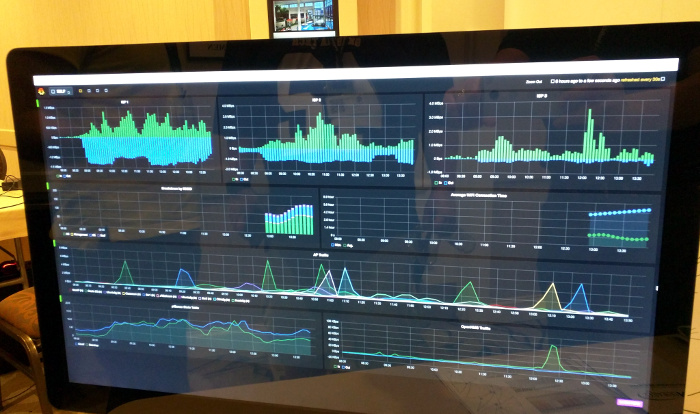 Speaking of fun (well, if you are a network management geek) we set up some more data collection on the show network. We added graphs for the number of people connected to each SSID, as well as the max and average association time between devices and APs. It was cool to see a dip around lunch time as a number of people left to get food, and then it came back up as they returned.

I often talk about how important it is to not only be able to collect data about the network but also to understand why the data is what it is, and it was cool to be surrounded by other geeks who liked to look at the output from OpenNMS and to understand it. 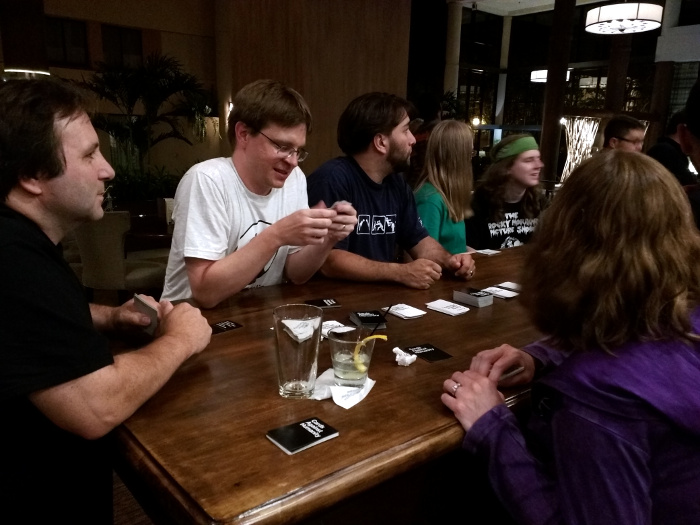 That evening there was a social gathering sponsored by Linode. I was able to hang out until a little after midnight and everyone seemed to be having a good time. There was the obligatory Cards Against Humanity game going on, and it was one of the largest I had seen. Not sure the game play works that well with so many people but those playing seemed to enjoy it.