POSCONN (or the Palmetto Open Source Software Conference) is a regional conference held every year in Columbia, South Carolina. It dawned on me that I travel too much, because when I mentioned to a neighbor that I spent some time in Columbia, she paused and then asked “oh, it’s almost winter down there”. I had to explain that I meant the Columbia that is three hours away and not the Columbia in South America.

I really like regional grassroots open source conferences, but for some reason I was never able to make POSSCON. This year I decided to change that and OpenNMS was even able to sponsor it. 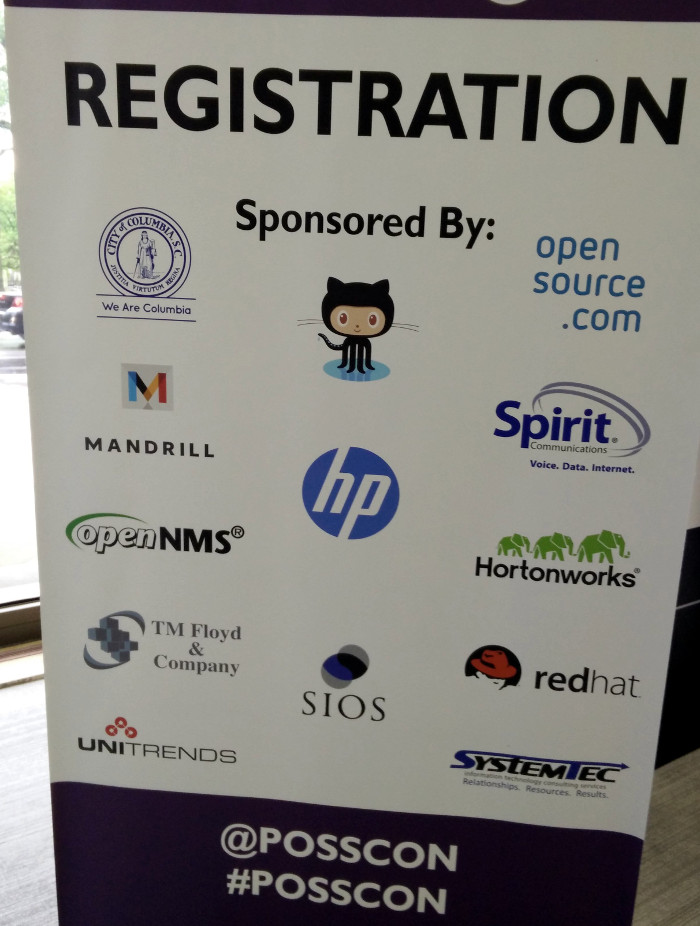 POSSCON is organized by IT-ology, a non-profit dedicated to promoting technology careers for students in kindergarten through 12th grade. I think they must know what they are doing since they really know how to organize conferences (they are also responsible for All Things Open held in Raleigh, North Carolina, each October).

We piled five of us into the Ulf-mobile and drove down Monday night. Ben came along even though Tuesday was his birthday, so we decided to go out on Monday night to celebrate. There are a number of highly rated restaurants in the downtown Columbia area, and with my penchant for vintage cocktails and Ben’s taste for whiskey we decided on Bourbon. It was a wonderful evening and for his birthday we bought him a flight of Pappy Van Winkle, an incredibly difficult to find bourbon. The verdict: it is worth the hype. 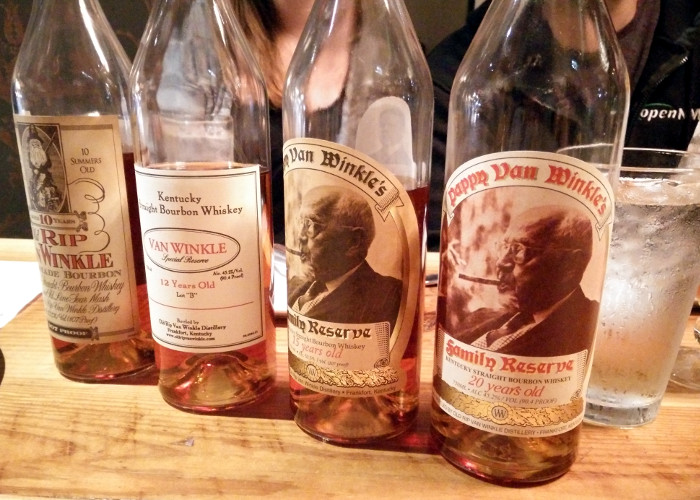 The show officially started on Tuesday and spanned two days. The first day consisted of roughly hour-long talks like most conferences. Where it differed was that the talks were held in different buildings around downtown Columbia. While it made it a little harder to jump from one venue to another, the weather, for the most part, was good.

The opening keynote was held at the Music Farm. As a sponsor we had a table which was also in the auditorium and I really liked that. One of the issues with having any sort of booth is that they are often set off in a side room. If you have booth duty you can’t see any of the presentations, and traffic between presentations is light. This way we had some down time during the presentations and yet got a lot of foot traffic in between them. Seemed to make the day go faster. The mayor of Columbia spoke and claimed to be the only mayor in America who was into open source, but I know of at least one other mayor, the mayor of Portland, Oregon, who attends these shows (I should disclose that the City of Portland is an OpenNMS customer). I didn’t want to bring it up though, ’cause this is a good thing to be proud of. 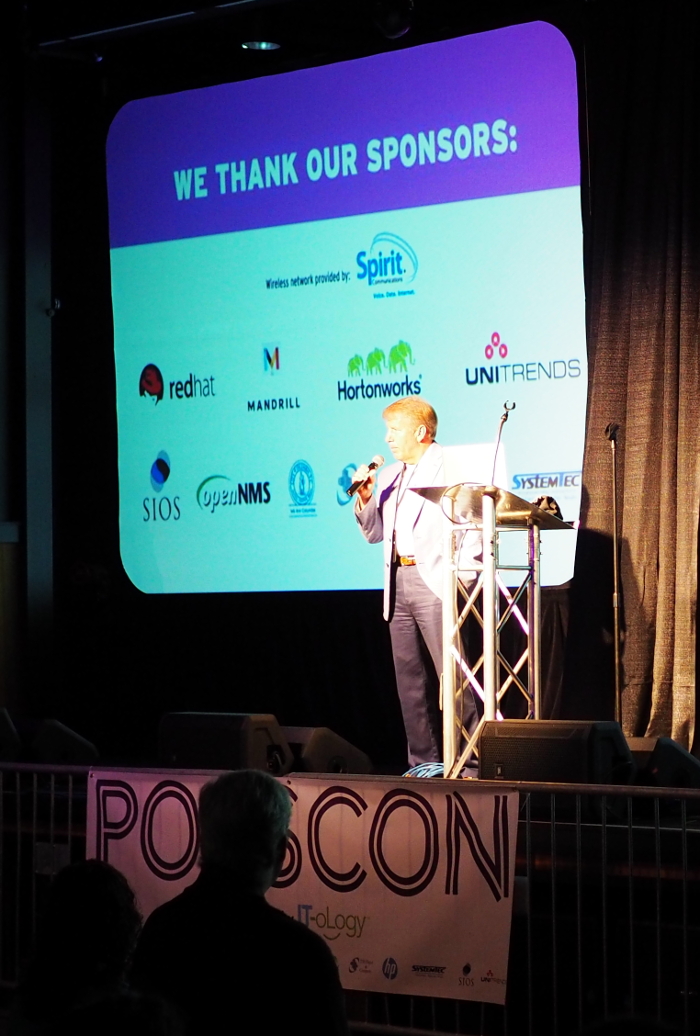 My presentation on the Linux Desktop was held at the Liberty Tap Room (‘natch) and while it was cool, it wasn’t the best place for presentations. The projector screen was dim (more useful for sports broadcasting at night then for tech talks in the middle of the morning). During one talk I had to listen to the Miller Lite truck idling on the road outside the door as the driver made his delivery.

Mine was the last one of the day, but I wanted to check out the venue so I went early and stayed for a talk on open source licensing (by one of the other sponsors) and one by Jason Hibbets of opensource.com fame.

I thought the presenter of the law talk was pretty brave discussing licensing with Bradley Kuhn in the room, but while I enjoyed the talk I could tell it was over the heads of most of the audience (you have to have lived it to really enjoy the finer aspects of the GPL and enforcement). I liked Jason’s talk, which I had not seen before, on the tools and processes they use at opensource.com to build community. 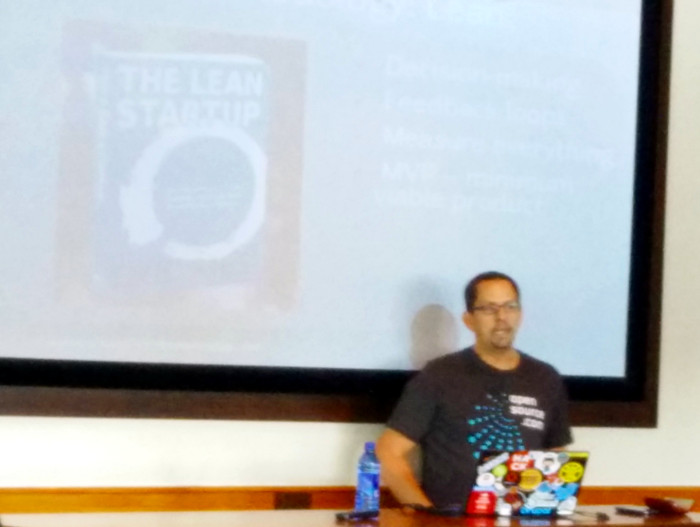 Toward the end of the day I saw a talk by Erica Stanley on open source and the Internet of Things. It was good but due to the lack of a sound system it was hard to hear everything. I presented after her and didn’t have that problem (grin).

I think my talk on using the Linux Desktop went well. Now three years after leaving Apple I’m still using it and still loving it.

Tuesday evening there was a reception back at Music Farm followed by a speaker/sponsor dinner held at Blue Marlin. Ben, Jess and I ended up at a table with Bradley Kuhn, Erica Stanley and Carol Smith from Google. We talked briefly about the Google Summer of Code. OpenNMS was involved for several years, but these last two years we were not accepted. Last year I was told it was because they wanted to give other projects a chance, and this year, to be quite frank, I don’t think our proposals were strong enough. Instead of complaining like some projects, I am hoping this will motivate the team to do better next year. I think GSoC is a wonderful program and I wish it was around when I was in school, as both the pay and work environment would have been better than the hours I put in at a non-air-conditioned plastic injection molding plant (although I will say the experience motivated me to finish my degree).

Wednesday’s format was a little different. Everything was held at the IT-ology offices, which was good since the weather was rainy all day. It was made up of workshops, and I did two and a half hours on OpenNMS. Everyone seemed to enjoy it.

Overall, it was a great conference. Over 800 people registered and I think they all got their money’s worth. It was also a great way to market Columbia (I know we spent some money there). It has made me look forward to this year’s All Things Open conference (note that the Call for Speakers is open).